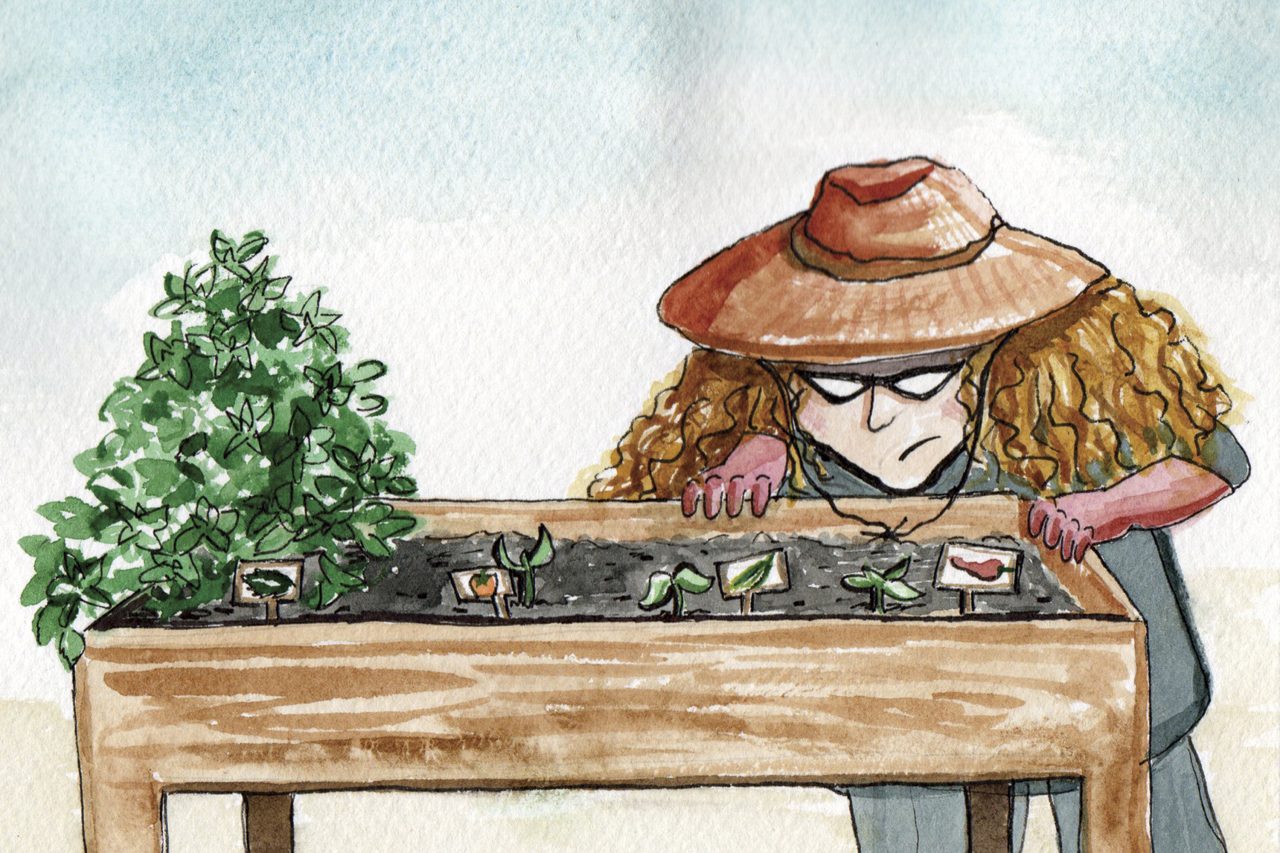 In the land of year-round sunshine, a deadbeat plant parent finally finds her inner farmer.

This came as a surprise to a lot of people – me most of all. When I asked for a raised wooden garden bed for Christmas last year, my husband, Ray, shot me a look.

“Will you actually use it?”

He had a point. I have a track record of asking for things I don’t use – like the AirPods he got me for my birthday last fall that I refused to take out of their teeny tiny case because I was so certain I’d lose them immediately, or the electric mixer that sat in a closet for years after our wedding because I just knew I’d turn it on and instantly cover the kitchen in a cloud of powdered sugar.

These days, I regularly sugar the kitchen and I still haven’t opened the AirPods. I am not a good gift risk.

There’s also the not-so-insignificant fact that until last spring, I’d never kept a plant alive. Not even an air plant. Once or twice a year, I’d buy a couple of geraniums at Home Depot, stick them in pots and forget about them till I had to toss the corpses to make way for the next batch.

And there’s one more thing: I really don’t like to go outside.

I’m not sure what finally motivated me to plant that vegetable garden. Maybe it was the fact that Ray spent hours assembling the bed after he broke down and bought it for me, or because we’ve been trying to eat less processed food. It might be because our eldest daughter was getting ready to graduate from high school and leave for college and I needed something else to raise.

I began with carrots and beets. The very nice man at the cute garden shop took one look at my panicked face and headed right past the seeds to the plant section. It felt like cheating, but I followed his lead and soon I was loaded down with seedlings, dirt and advice. Along with the carrots and beets, I bought arugula, spinach, chives and mint. The mint will keep the bugs away, he promised.

I went home, planted my garden, then immediately did what we all do – I posted about it on Facebook. Almost instantly, I learned that gardening is practically as controversial as politics, which is saying a lot these days. I got advice about when to water and how much, which kind of soil to use, where to place the raised bed and whether or not to plant in a raised bed at all. Mostly, people were concerned about the mint. Apparently, mint is a weed. It would take over my garden and ruin it, choke out everything else! I was doomed.

A friend offered the best advice yet.

Don’t worry about the mint, she told me. It will be OK. Your garden is your garden. There isn’t another one like it. The alchemy of the soil, the quality of the plants, the placement of the sun – it’s all unique. There’s no instruction manual. No one can tell you what to do. You’ve got to figure it out on your own.

I did. The mint grew far and fast, and the bugs came, anyway, so I tried a spray from the garden store, finally learning that watered-down dish soap worked best. When the mint got completely out of control, I yanked it and crushed the leaves, soaking them in vodka to make mint extract. (Holiday gifts: check.) I harvested tiny beets and carrots – unsure they’d grown at all from the time I planted them, but hey, they were still alive – and made a salad. I went back to the garden store again and bought okra seeds and a habanero plant and surprised myself by how green something can be in July in Phoenix. I almost fell over the day I noticed a red pepper growing on the habanero plant. I put that in vodka, too.

I didn’t get a lot to eat out of the deal, but I got so much more. I never would have believed that one little garden bed would make such a difference. I started noticing other things in my yard – like the kumquat tree that had mysteriously stopped growing kumquats and started growing sour oranges, and the hibiscus flowers that I contemplated turning into tea. I learned that I am not cut out for composting, but I found that I looked forward to going outside to water, even on the hottest days, and I started to think about what I could plant in the fall.

Phoenix doesn’t have its own native seed bank, but the public libraries do make seeds available, so I went to Burton Barr Central Library and “checked out” lettuce and two kinds of corn – including gem corn, which isn’t particularly tasty, apparently, but looks beautiful on Instagram. The arugula never showed, but the corn shot up overnight. I posted a photo on Facebook.

“I’ve been told it grows so fast you can hear it,” one friend wrote.

“As high as an elephant’s eye!” another quipped.

I don’t know about that, but I’ve already told Ray what I want for Christmas this year: a second raised garden bed.