Once Charlie Levy and his team found out that more than 160 different languages are spoken in Phoenix, they knew they had to do something to showcase the city’s diversity. 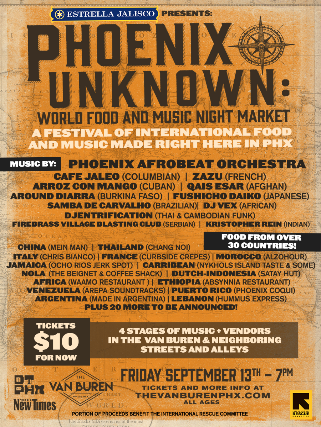 “We were just discussing how there’s so many different cultures and people from all over that live in Phoenix and how little we knew about this,” says Levy, who owns popular Downtown haunts The Van Buren and Crescent Ballroom.

Enter Phoenix Unknown: World Food and Music Night Market, a festival celebrating international snacks and sounds from right here in the Valley. On Friday, September 13 from 7 p.m. to midnight, 20 international bands will play across four stages at The Van Buren and surrounding alleys while local restaurants will serve up cuisine from more than 30 countries.

“I was like, ‘Man, it’s almost like an Anthony Bourdain show, Parts Unknown but it’s Phoenix Unknown,’” Levy says. “Picture a night market but it’s all our neighbors, it’s all people from Phoenix that are going to get together and play some amazing music and cook some yummy food.”

Levy sets the scene: Dozens of string lights hovering above a buzzing labyrinth of tents and booths with the opportunity to discover new music around every corner – including in the “Lost Monroe Abbey,” an alley near the Van Buren that hasn’t hosted a public event since 1984.

“I think we kind of went with that Anthony Bourdain spin… you’d always watch him go into an Asian night market or a night market somewhere in eastern Europe and we felt like that was the kind of feel we wanted to bring to the festival. “Levy says.

“I just think it’s going to be a really fun way to spend a Friday evening,” he says.