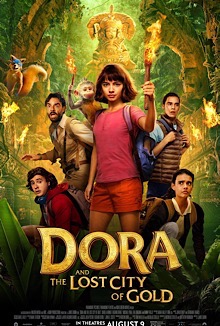 The live-action version of the TV cartoon star Dora the Explorer is a smiling, relentlessly upbeat teenager, played by Isabela Moner. In the corny but sweet Dora and the Lost City of Gold, opening this weekend, her comic foil is played by Eugenio Derbez.

A comedy superstar for decades in TV and movies in his native Mexico, Derbez is developing a profile in the U.S. with films like 2013’s Instructions Not Included, which he also directed and co-wrote, but also mainstream films Dora and Angry Birds 2. PHOENIX had the opportunity to chat with Derbez during his recent visit to the Valley (answers have been edited for length):

PHOENIX Magazine: Is Dora the Explorer a thing in Mexico?

PM: Did your kids watch it?

ED: Yes, they grew up watching the show. I’m going to be honest, I never watched an entire episode, until now. But we always knew that Dora was there, and they were always selling merchandise.

PM: You’ve been in the U.S. for a few years now. What’s the biggest difference between the experience of doing a film here, as opposed to Mexico?

ED: Budget! Budget is No. 1. Here, the industry is very solid, very strong. You’re able to make a movie with more resources, more quality. We didn’t have that kind of budget [in Mexico] so we had to fix that with creativity. So, instead of having special effects, we had to have better storytelling, better writers. That’s why sometimes we have amazing movies, with low budgets but with great storylines.

ED: It is, but there’s something weird; the Hollywood blockbusters are always killing us. The biggest, biggest movie of all time in Mexico, nowadays, thank God, it’s Instructions Not Included, my first movie as a director. But before that, there was no Mexican movie that made more than, I don’t know, $10 million. And every single Hollywood movie made more than that. And it’s just because the complexes give more space to the Hollywood blockbusters than to the Mexican movies.

PM: Who would you say are your biggest influences as a performer?

PM: What is the basis of your comic persona?

ED: Well, let me tell you that I had to change my personality a lot, because in all my shows — I’ve been doing TV shows in Mexico for 25 years — I’m always playing with language. Comedy in Latin America, for some reason, it’s very broad, very farcical, very big. Too big! When I came here, I realized, first of all, that I can’t play with language, because it’s not my first language, so I don’t know the language as well as I know Spanish, and also couldn’t play with my physicality, because all the directors were like, “Bring it down, ground it, don’t move your face, don’t move your eyebrows,” so it’s been hard to find my new way to make people laugh. But I’m trying to get there.

PM: What’s the next project that you want to do as a director?

ED: There’s one that is coming hopefully pretty soon. I think it’s going to be the next project produced by my company, called The Valet. It’s very interesting; it has a lot of heart, and it talks a lot about all these people that are invisible in this country.

PM: What was it like working with Isabela Moner [Dora]?

ED: Oh, she’s amazing. She’s so talented. You’ll see; she’s going to fly all the way to the stars. She’s great at comedy; she’s a great dramatic actress. The best thing she does? Singing. She’s a great singer and a great dancer.

PM: Your character in Dora is not from the cartoon, is it?

ED: No, it’s a new character. What I like about Dora is that it has a lot of messages hidden, like the fact that she stays true to herself. And what I’m loving about Dora is that in this time when we’re being so harassed, the Latinos, especially right now with this administration, I see kids — I’m always casting kids, and the Latino kids in this country, they don’t speak Spanish, or they speak a terrible Spanish, and I’m always asking their parents why? You speak Spanish at home! And they say, we didn’t want our kid to get bullied at school, and they get bullied for speaking Spanish, they get bullied for being Latino. And now, Dora is telling all these kids it’s OK to speak Spanish, it’s cool to be Latino and have brown skin. So I’m really glad that it’s coming out right now.