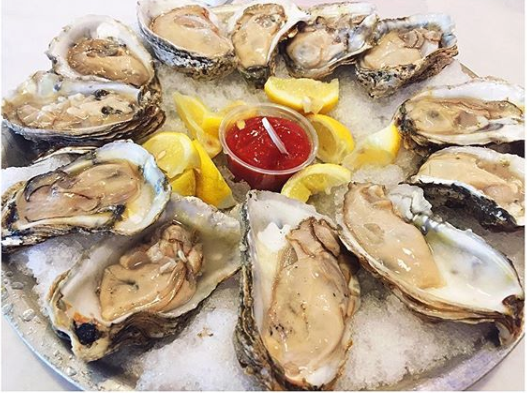 Fried, chargrilled, raw or Rockefeller, today is all about celebrating oysters. Here are five places to find the salty snack in Phoenix.

Angry Crab Shack
This Cajun-themed seafood spot is known for its fresh, customizable seafood boils, but it’s also a great option for oysters. On National Oyster Day, get a raw half-dozen for $8 or a dozen for $16. Chow down on half a dozen chargrilled oysters for $12 or a dozen for $24.
Eight Valley locations, angrycrabshack.com

MODERN Oysterbar + Chophouse
MODERN is celebrating National Oyster Day all week long with its five-course, prix fixe menu, which feeds two for $80. Each dish except for dessert features oysters – oysters both fried and on the half shell, Oysters Rockefeller and oyster pot pie. Though the upscale steakhouse and seafood joint is closed on Monday, guests can take advantage of this deal until Saturday, August 10.
10050 N. Scottsdale Rd., Ste. 127, Scottsdale
480-531-1400, modernoysterbarchophouse.com

Ocean Prime
Every Monday throughout the summer, Ocean Prime offers its Half Price Happy Hour Special which features six oysters with frozen granita for $13. Wash it down with discounted Schramsberg Blanc de Blancs or Rosé by the glass or bottle.
5455 E. High St., Ste. 115, Phoenix
480-347-1313, ocean-prime.com

Casey Moore’s Oyster House
This cozy college bar has some of the best seafood around. Celebrate National Oyster Day with $2 off raw and fried oysters. Diners can take advantage of this deal all day, which also includes oyster shooters. Bottom’s up!
850 S. Ash Ave., Tempe
480-968-9935, caseymoores.com