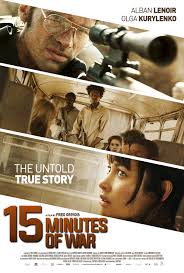 15 Minutes of War—Originally titled L’Intervention, this thriller dramatizes a true incident. In February of 1976, a busload of schoolchildren in Djibouti, then still under the French, is hijacked by Somali terrorists. The bus is disabled in the no-man’s land between French turf and the Somali border, and the schoolteacher (Olga Kurylenko) demands to be taken aboard as an additional hostage to look after the kids. An elite sniper team of the Gendarmerie, later known as GIGN, is sent in to get the kids off the bus.

The movie, directed and co-scripted by Fred Grivois, stages the hijacking with convincing, frightening tautness. Grivois then goes on to introduce us to the snipers something in the manner of an old-school war movie, with jocular male-bonding humor; their superiors are also conventionally depicted as cravenly political in their inaction.

The actors are strong—the warmest and most distinctive of the snipers, Michael Abiteboul, kept reminding me of Seth Rogen — and whatever one’s feelings about colonialism, the conflict here is such that you can’t help but root for the snipers to get the kids to safety. But the movie climaxes with a frenzy of bloody exploding heads, and this being a true story, somehow this feels queasy in a way that it probably wouldn’t in a pure action-movie fantasy. 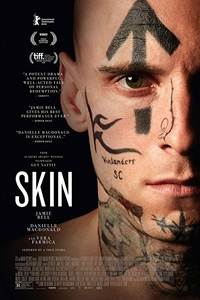 Skin—Jamie Bell plays Bryon Widner, a real-life skinhead in the Midwest who became gradually disenchanted with his white-supremacist lifestyle after marrying a single mother (Danielle Macdonald) with three daughters. Breaking away from his murderous neo-Nazi surrogate parents (Bill Camp and a deeply creepy Vera Farmiga) and siblings didn’t prove so easy, however, and even after the separation, the hardcore tattoos that covered his face and body made it tough to rejoin mainstream society.

Bell plays Bryon, who fell into the quasi-family white nationalist community as a teen runaway, as an intelligent, sensitive person, too decent for this loathsome world. But he’s also been part of it too long to make a simple renunciation possible.

Directed by Israeli filmmaker Guy Nattiv, this harsh heartland melodrama is based on a 2011 TV documentary called Erasing Hate. That title refers to an appalling, yet uplifting, physical price which Widner paid for his crimes: the removal of his tattoos via painful plastic surgery procedures that lasted nearly two years.

These penitential sessions, scattered throughout the narrative, seem after awhile to take on an allegorical quality, analogous to America’s agonies in trying to erase our country’s own disfiguring racist heritage. Let’s hope we can someday come out as unblemished as Widner’s face.