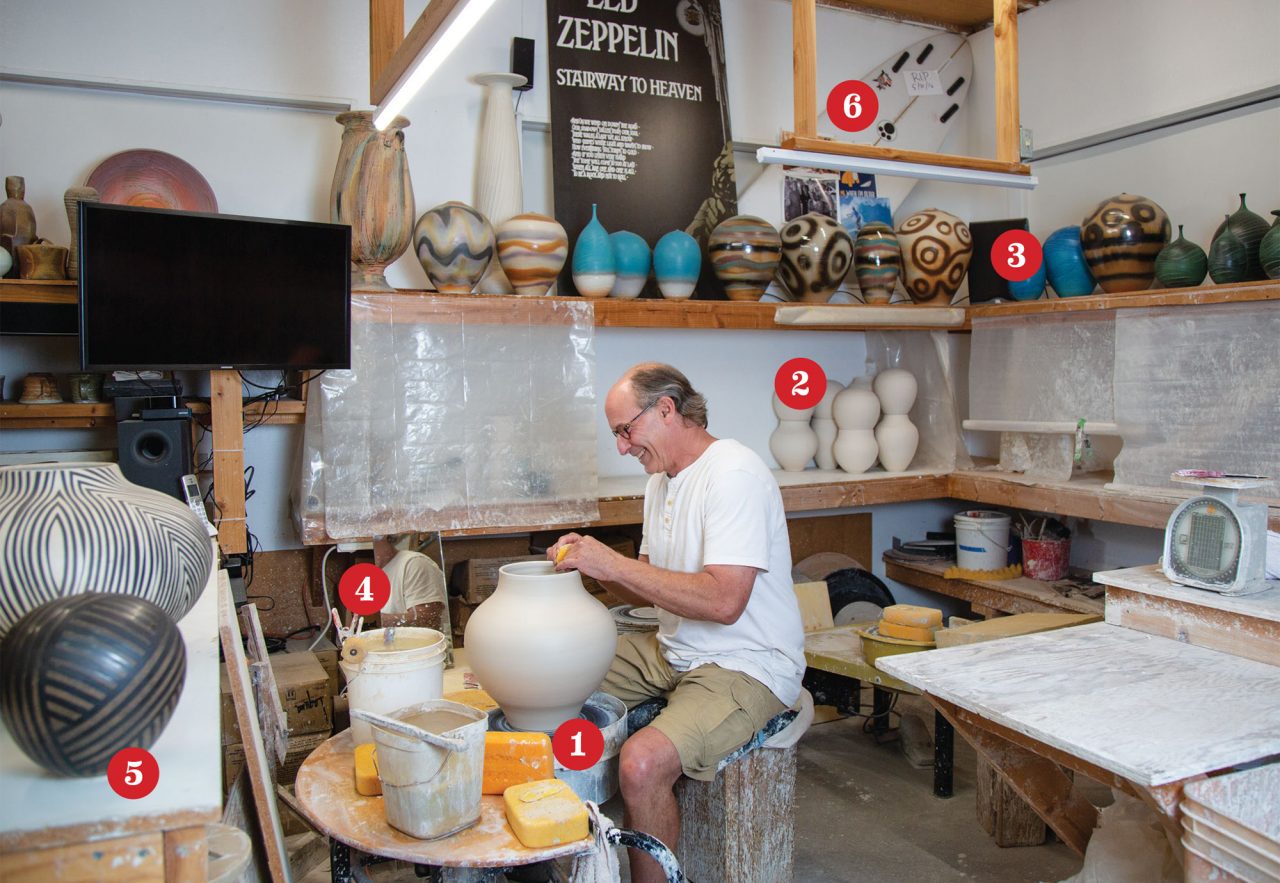 In the 1960s, Nicholas Bernard and his brothers “ran wild” in Los Angeles. “There were no play dates,” he says. Having three active boys younger than 10 prompted Bernard’s mom to sign them up for free art and ceramic classes. After a move back east in high school and a pottery apprenticeship in New Hampshire, Bernard headed west to attend Arizona State University’s ceramics program.

Bernard has been a studio potter for 40 years – 30 working from his airy home studio in Scottsdale. He fills the space with family photos, notes from customers, past show announcements and pots of all shapes and sizes, some in black and white, many in vivid blues and greens or vibrant shades of red and orange, and others in muted earth tones. Bernard’s palette stems from experimentation with different washes, sprays, oxides and glazes. The work itself? “This is all about craftsmanship, technical ability and just brute force. This is heavy-duty hard work,” he says, pointing to one of his prized pieces, a towering indigo pot.

Bernard draws inspiration from other artists and his own work, by observing the pots’ shapes, patterns, textures, proportions and clean form. “It’s all about the structure. You can add all this color and texture, but if you make crummy pots, you’re just putting a tutu on a poodle. It’s not a dancer. It’s still a dog.”

That said, his goal is to make “pretty” pots. “I want someone to look at one of my pots and say, ‘Wow, that’s beautiful.’” Learn more at nbernard.com.

Machine used to “throw” or shape pots that spins while Bernard works the clay with his hands and other tools.

After throwing the pots into desired shapes, Bernard sets them aside to dry. At this stage, pots are called greenware.

The end product after drying, spraying, glazing and firing in the kiln.

Used to see the pot’s silhouette in order to make adjustments.

Bernard’s patrons have asked for a revival of his early work (large, low-fire earthenware pots from the 1990s). This pot reflects that.

After only five rides, Bernard’s new surfboard busted in half just north of Los Angeles when a large wave broke on his head.