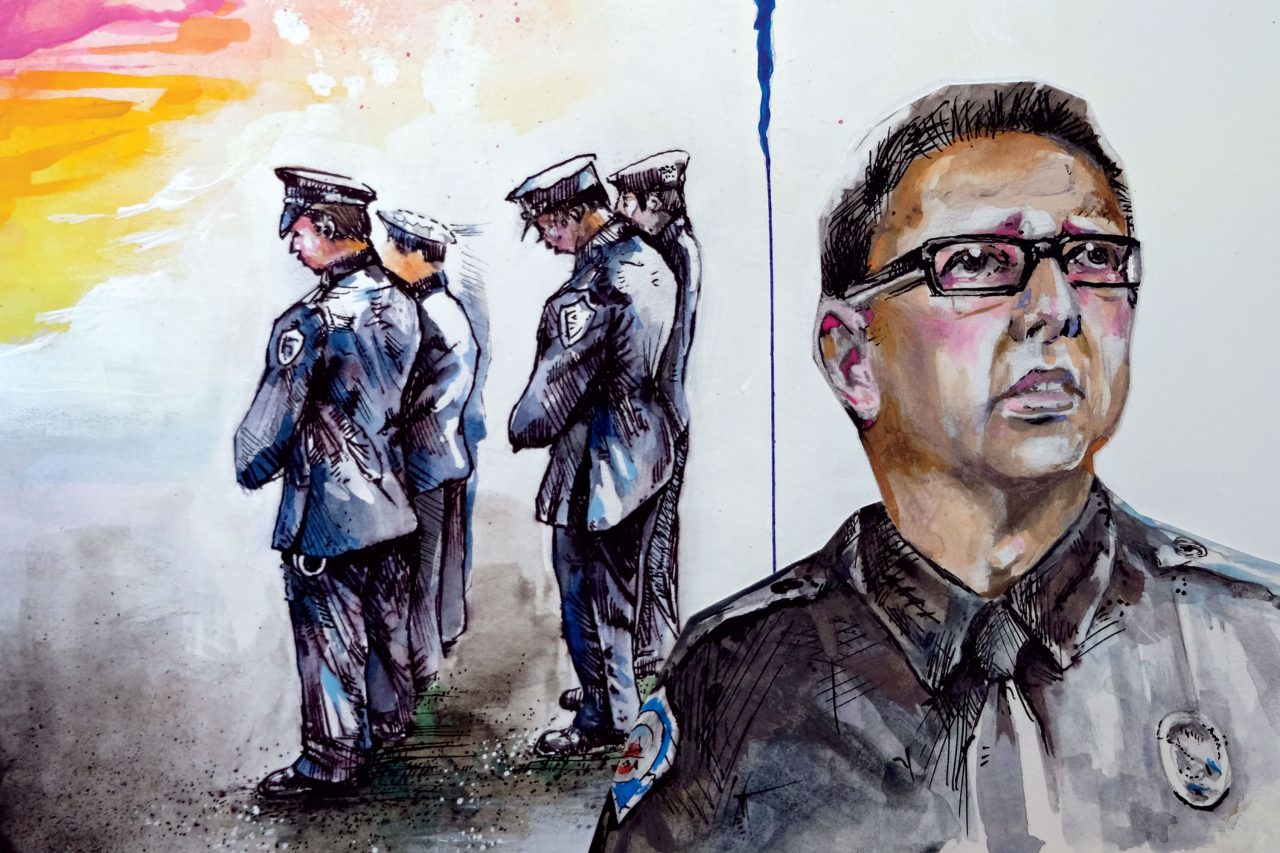 Mesa’s police chief made headlines by publicly reprimanding his officers. Now some are calling for his resignation.

Last summer, after viewing a pair of videos from the same week in which Mesa police officers appeared to be using excessive force against suspects in two separate incidents, Mesa police chief Ramon Batista surprised many by going on local news media to reprimand his officers.

“I’m angry and I’m deeply disappointed by what I saw,” Batista said in the June 8, 2018, press conference. He promised to launch an independent investigation to “shine a glaring light” on the use of force and institute implicit bias and de-escalation training. “It’s unacceptable and it needs to stop immediately.”

While a review conducted by the Scottsdale Police Department at the request of the Mesa PD returned no criminal charges for the seven officers, the internal affairs investigation, led by former Maricopa County Attorney Rick Romley, ordered disciplinary actions for four and cleared three. An FBI review for civil rights violations is ongoing.

The Mesa Police Association and the Mesa Fraternal Order of Police unions have called for Batista’s resignation, charging his attempted reforms sunk morale.

On June 6, union leaders held their own presser at the Phoenix Law Enforcement Association office in Downtown Phoenix. Flanked by 10 members from both organizations and FOP president Will Biascoechea, MPA president Nate Gafvert shared the results of an online survey taken by 533 of the unions’ members, in which 95 percent voted they had “no confidence” in Batista’s leadership. A released copy of the survey, conducted by the Arizona office of the national public relations firm Strategies 360, included scathing comments, including one calling Batista a “liberal snowflake who cares more about public image than his officers.”

Headlines were slightly disingenuous. KTAR ran with “Mesa police union votes 95% no confidence in Chief Batista,” while ABC15 reported the unions voted “overwhelmingly against” the chief. In fact, the 533 survey respondents represented less than half of Mesa’s roughly 1,200 police employees, who were all invited to participate. Not all participants were sworn officers – the MPA includes civilian employees, and FOP membership includes retired law enforcement personnel.

“There were also retired individuals who were sent the survey that don’t even live in state,” says Andre Miller, pastor of Mesa’s New Beginnings Christian Church and a Batista supporter. “One was a former Mesa assistant chief who now lives in Idaho. He’s been gone since 2014.” (Batista was appointed chief in July 2017, after serving for 31 years in the Tucson Police Department.)

Nevertheless, the unions achieved their objective in changing the public conversation. “Chief Batista prematurely convicted those officers in the court of public opinion,” Gafvert said. “So unfortunately, now here we are in the court of public opinion.” He acknowledged that a motion of no confidence carries no actual power – no union has the authority to choose the boss, though Gafvert says they have “excellent candidates” in the department. “We’ll continue to ask our citizens of Mesa to apply pressure on City Council to remove the chief if he’s not willing to step down.”

That may be a tough sell, despite the $30,000 Gafvert says the unions have set aside to launch a campaign targeting the chief. “This is a chief that’s well-liked by the mayor and the City Council and the community,” says Mesa City Manager Chris Brady. “Currently we have one of the lowest crime rates in the country for a city our size. And since he sent that message, knock on wood, we’ve not had any more incidents like those. So we’re going to keep working on finding ways that help Chief Batista in moving our city along.” Whether Batista will be able to continue leading a department with so much dissention in the ranks is another matter.

“It’s very rare that you see a police chief who survives a no-confidence vote,” says Will Aitchison, founder of Portland, Oregon-based Labor Relations Information System, which monitors labor trends in police unions. “Typically when they do occur, it means that there’s been a complete breakdown in communication between the chief and the rank-and-file officers. If you have a police chief who’s ambitious, in the sense that he or she wants to put into place certain programs to change the culture… a no-confidence vote is pretty much going to be prohibitive of that. Because the chief needs to have the respect of the troops to accomplish that.”

As an attorney with 40 years experience in training police personnel in labor issues, Aitchison says he’s never seen a department strike following a no-confidence vote. “Law enforcement organizations are self-described as paramilitary organizations,” he says. “They are taught and bred to respect the chain of command – even if they don’t like the commander. You know, there’s the old adage: If you shoot at the king, you better kill the king.”

Gafvert validated that when asked by 3TV/CBS5 reporter Maria Hechanova if there might be work stoppage or a case of the “blue flu” if Batista doesn’t step down. “Absolutely not. We’re here for the citizens of Mesa and our community, and to even have a discussion about a ‘blue flu’ is disgusting, and we will not tolerate it.”

Expect more outreaches to the public, though – even as that community calls for greater transparency, accountability and restraint from its police force.

“Our officers are now out there hesitating,” Gafvert told reporters, “in fear that if they do something that’s completely lawful but might look ugly on the 6 o’clock news… officers are hesitating to use their force.”

“People are tired of the ‘us vs. them’ mentality in policing, but it’s almost like the unions want it to stay that way,” says Miller. “And that’s just not OK anymore.”

The incidents leading up to the no-confidence controversy:

Body cam video shows officers roughing up 15-year-old robbery suspect Gabriel Ramirez Jr. after he’s handcuffed. Officer John Santiago is seen placing his foot on Ramirez’s back as he lies on the pavement while officer Daniel Glover grabs him by the ear. 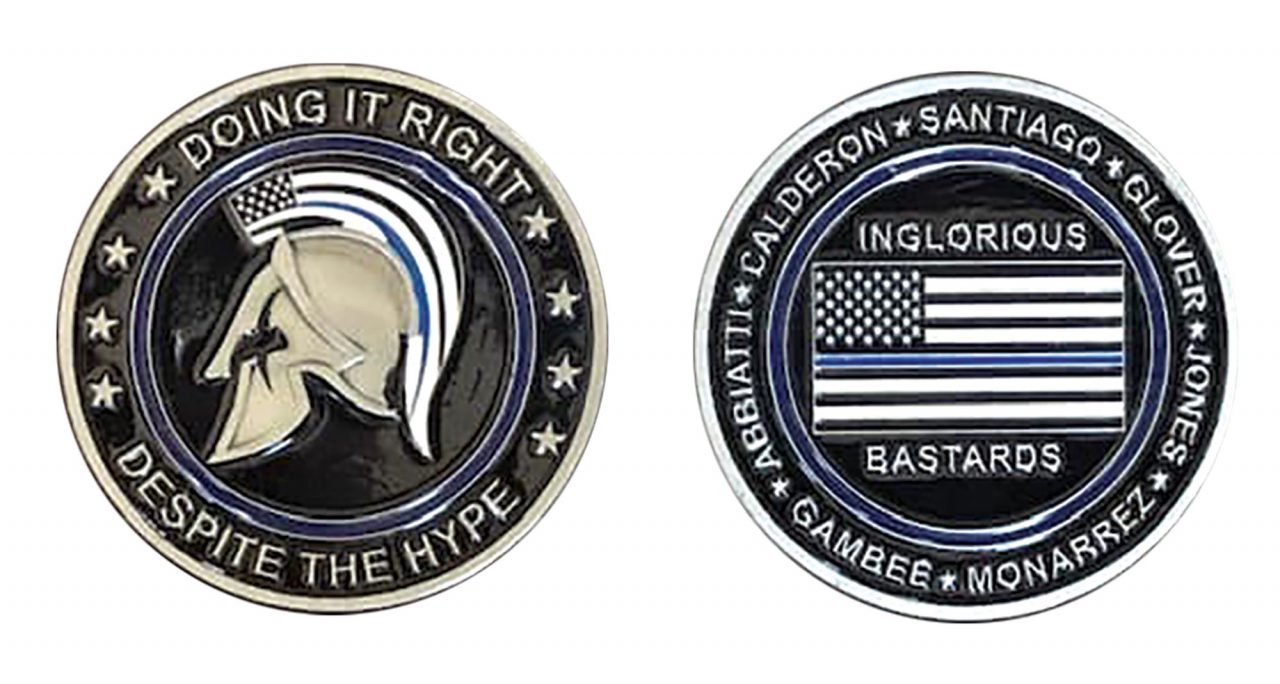 A week later, on an apartment complex security camera, Mesa officers responding to a domestic disturbance call are seen forcing an unarmed suspect, 33-year-old Robert Johnson, to sit down in a hallway. Officer Jhonte Jones punches him in the face. After dog-piling Johnson on the ground, the officers pull him to his feet. Detective Robert Gambee slams his face against an elevator door.

“The Mesa Police Department has been in the news for all the wrong reasons,” Chief Ramon Batista says in a press conference where he announces plans for reforms.

Jones and officers involved in the Johnson case – Ernesto Calderon, Rudy Monarrez and Timothy Wahlberg – are given non-disclosed disciplinary actions. Gambee and sergeants William Abbiatti and Gretchen Moore are cleared. In the Ramirez case, both officers are put on leave and later moved to administrative duties for nine months.

On a coin pressed and circulated among the Mesa PD, the names of the accused officers are printed around an image of the “thin blue line” flag (above).