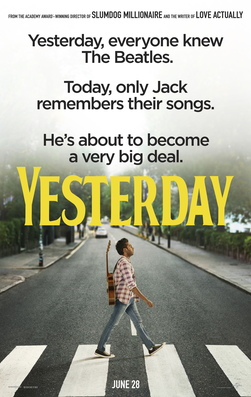 Yesterday—Jack Malik is a small-potatoes singer-songwriter playing gigs in Suffolk pubs, supported only by a few friends and his devoted manager Ellie, who’s obviously in love with him—obviously to everyone but him, that is. Just as he’s about to swear off his musical ambitions for good, he suffers an accident at the same second as a brief but worldwide power outage.

Gradually Jack begins to realize that since the lights came back on, seemingly everyone else in the world has somehow forgotten The Beatles (as well as a few other cultural icons); they appear simply never to have existed as a band. He plays “Yesterday” for his friends, and they’re gobsmacked, assuming that he wrote it. Once he’s satisfied that it’s not an elaborate practical joke, he tries out a few more Fab Four numbers on audiences, and fame and fortune beckon at once.

Jack is played by EastEnders veteran Himesh Patel, and Ellie by Lily James; Kate McKinnon eventually shows up as a stereotypical horrid music industry bigshot. Scripted by Richard Curtis of Love, Actually and directed by Danny Boyle of Slumdog Millionaire, it’s an endearing high-concept fantasy, even though the premise doesn’t bear a ton of scrutiny; surely modern pop culture, let alone pop music, would be very different if the Beatles had never existed. It’s also hard to say how (or if!) the Beatles catalog, monumental though it is, would be received if it were dropped in a lump into the middle of the contemporary music scene. Even in the film, Jack has a hard time getting his parents to sit still for “Let it Be.”

And even setting aside these conceptual questions—which isn’t hard to do, in a movie this fun—it should be said that Yesterday dawdles a bit, and makes some missteps, particularly in its homestretch. But Patel is an amusingly befuddled everyman, and he sings and plays wonderfully. James is adorable too, though it’s a bit vexing how Curtis falls back on the weary choice between the sweet hometown girl and soulless stardom as the hero’s moral quandary.

That’s the only overfamiliar element, however; Curtis and Boyle otherwise manage to avoid predictability in the twists and resolutions of the story. They also do an admirable job of putting us in the position of hearing these songs, as the saying goes, again for the first time.  The title number, in particular, asserts itself as a masterpiece of flawless, timeless lyric and stirring melody. Their music has become such a part of our cultural furniture that we’ve come to take it for granted, but even a casual Beatles fan like myself may leave Yesterday with the sense that those lads from Liverpool, you know, weren’t too bad. 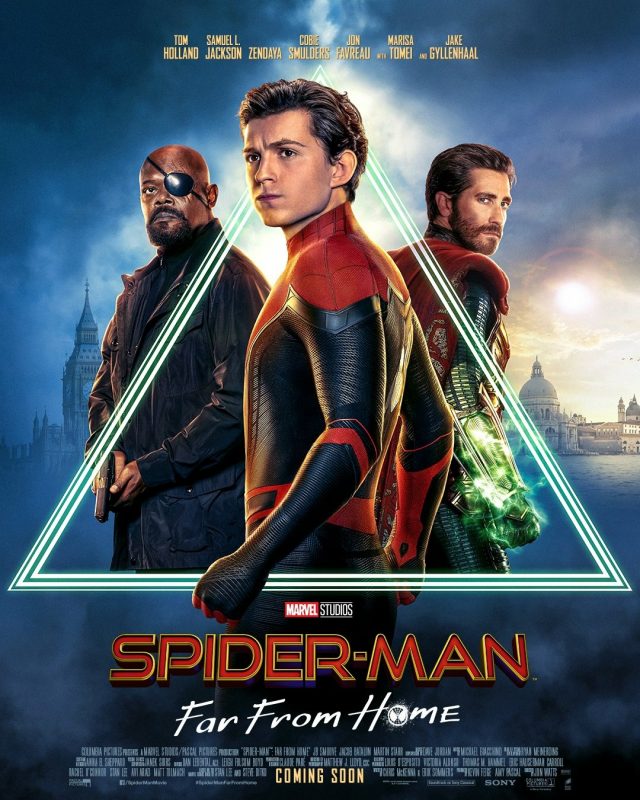 Spider-Man: Far From Home (in theaters July 2)—Marvel flicks keep arriving at such a brisk pace these days that they can hardly be considered “event movies” anymore. Just two months ago we had Avengers: Endgame, and now it’s the latest adventure of the “Web-head,” set in a post-Endgame world in which everybody is still reeling from the restoration of half of the people in the world, and mourning the loss of the heroes from that movie.

Against this backdrop, Tony Stark’s protégé Peter Parker (Tom Holland) is still trying to live a semi-normal life as a teenage high school kid in Queens. He’s going on a school trip to Europe, on which he has an elaborate plan to confess his feelings to his classmate M.J. (Zendaya). But all this is interrupted when vast specters called “Elementals” appear various places around the world, leaving wrack and ruin in their wake.

Peter/Spidey gets caught up in an adventure involving Quentin Beck, aka Mysterio, re-conceived from the comics and played by Jake Gyllenhaal, as well as Nick Fury (Samuel L. Jackson). Big destructive action set-pieces ensue from Venice to Prague to London’s Tower Bridge, alternating with scenes of teen-angst romantic turbulence.

The director is Jon Watts, who also helmed 2017’s Spider-Man: Homecoming. Like that film, he keeps Far From Home lively and fast-paced, and if the tone of the lighthearted high-school stuff doesn’t always gel with the superhero sturm und drang, that just adds to the loose and free-swinging feel. Holland still has his callow, heartfelt appeal, and Zendaya is thoroughly charming as M.J. They’re ably supported by veterans from Gyllenhaal and the ever-curmudgeonly Jackson to Cobie Smulders, Martin Starr, J. B. Smoove, Jon Favreau and Marisa Tomei as the cool young Aunt May.

This is an easygoing summer-movie trifle, make no mistake, and yet in these trying times it’s hard not to observe that the plot involves the trumping-up of illusory perils, in order to consolidate power by creating a false hero narrative for the public. In years to come, this may seem very much a movie of its era.