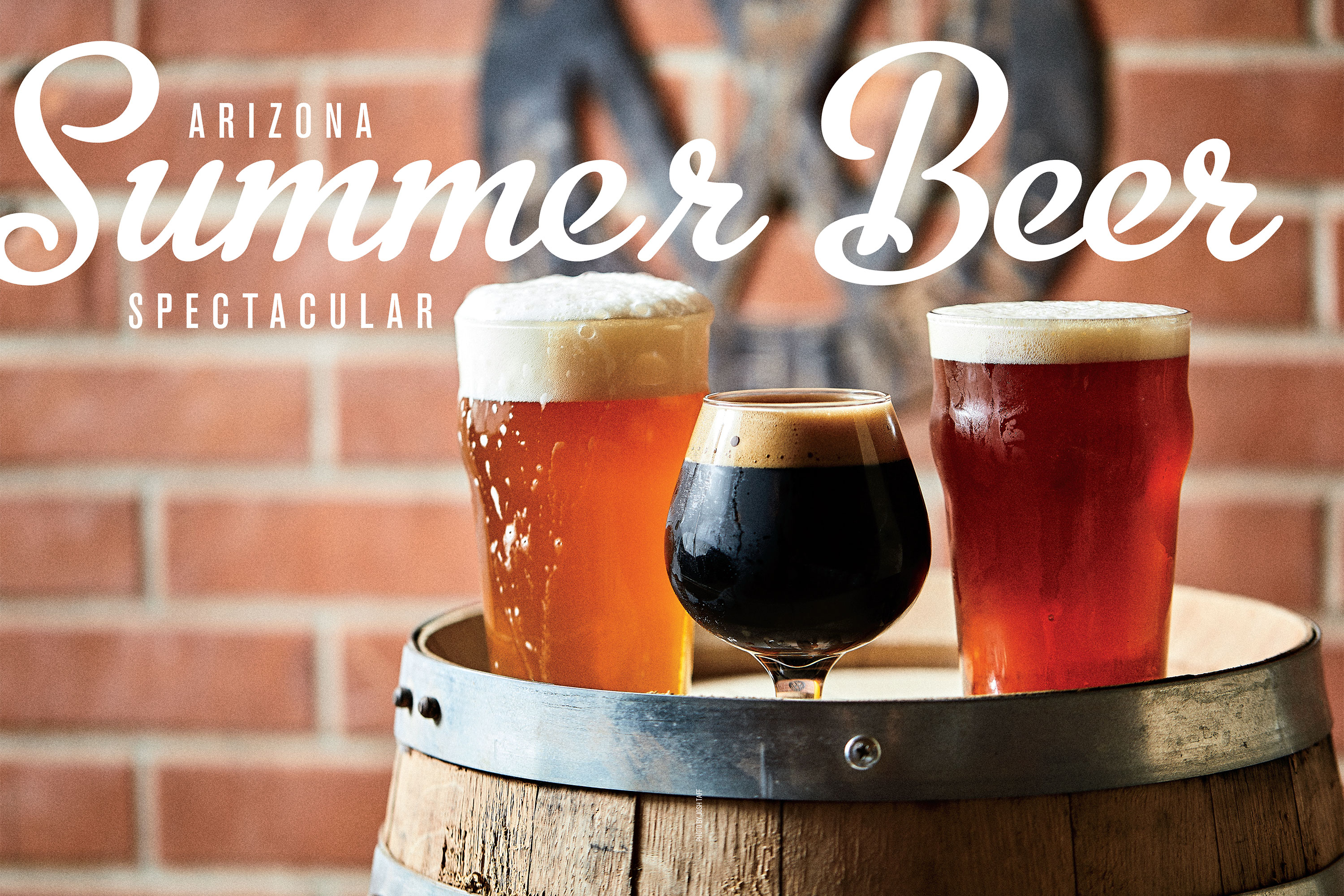 Triple-digit heat getting you down?

(And Where to Find Them)

What do Arizona’s leading tastemakers have boiling in their collective kettle? Read here to find out.

The onslaught of New England-style hazy and juicy IPAs for the last two years has prompted West Coast brewers to counter with a new Champagne-inspired IPA style. Typically made by adding an enzyme called amyloglucosidase to the wort, which helps the brewer’s yeast consume all the available sugars, brut IPAs are bone-dry, highly effervescent and perfect for summer. Consider this the Tupac versus Biggie cross-country rivalry of the craft beer world. 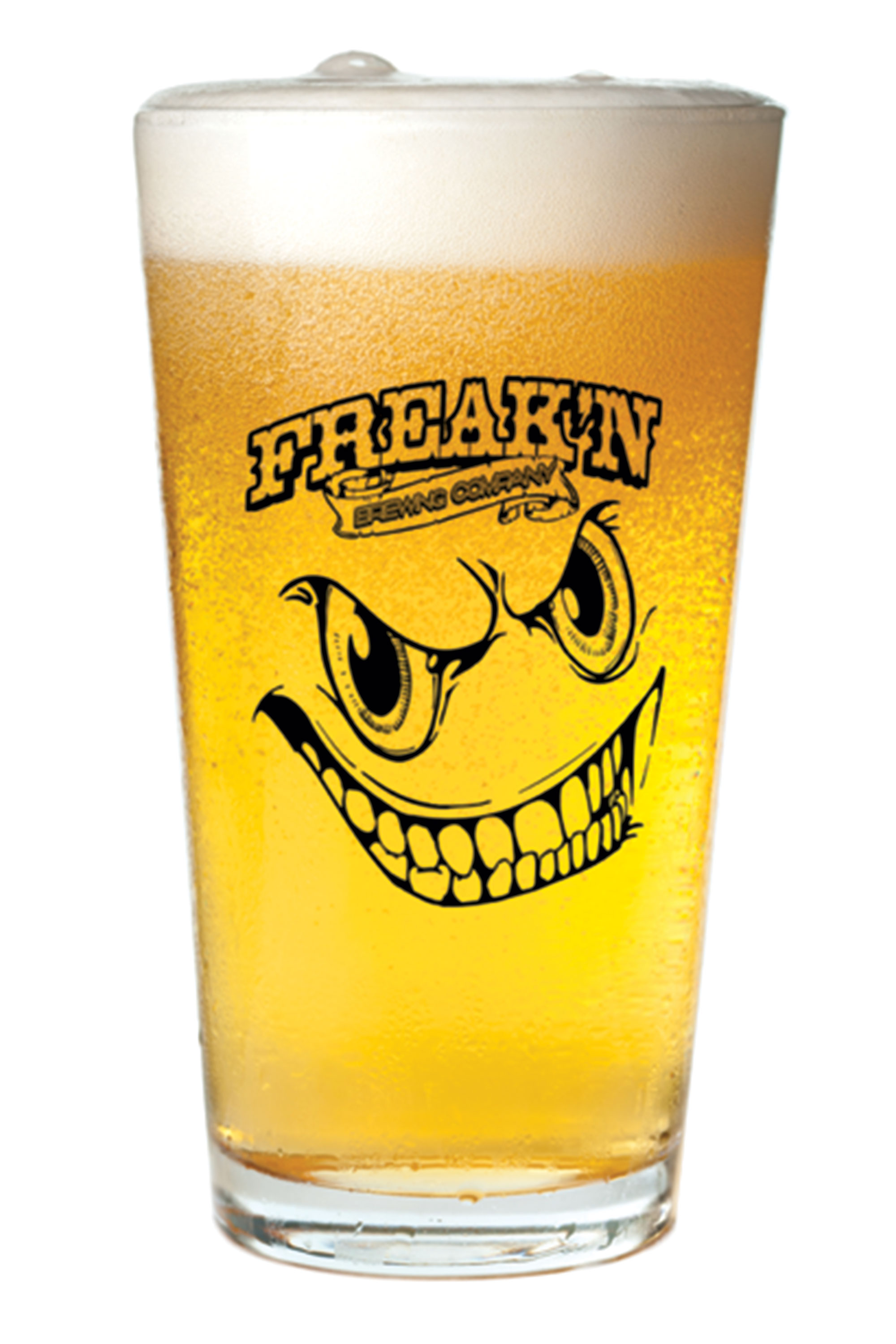 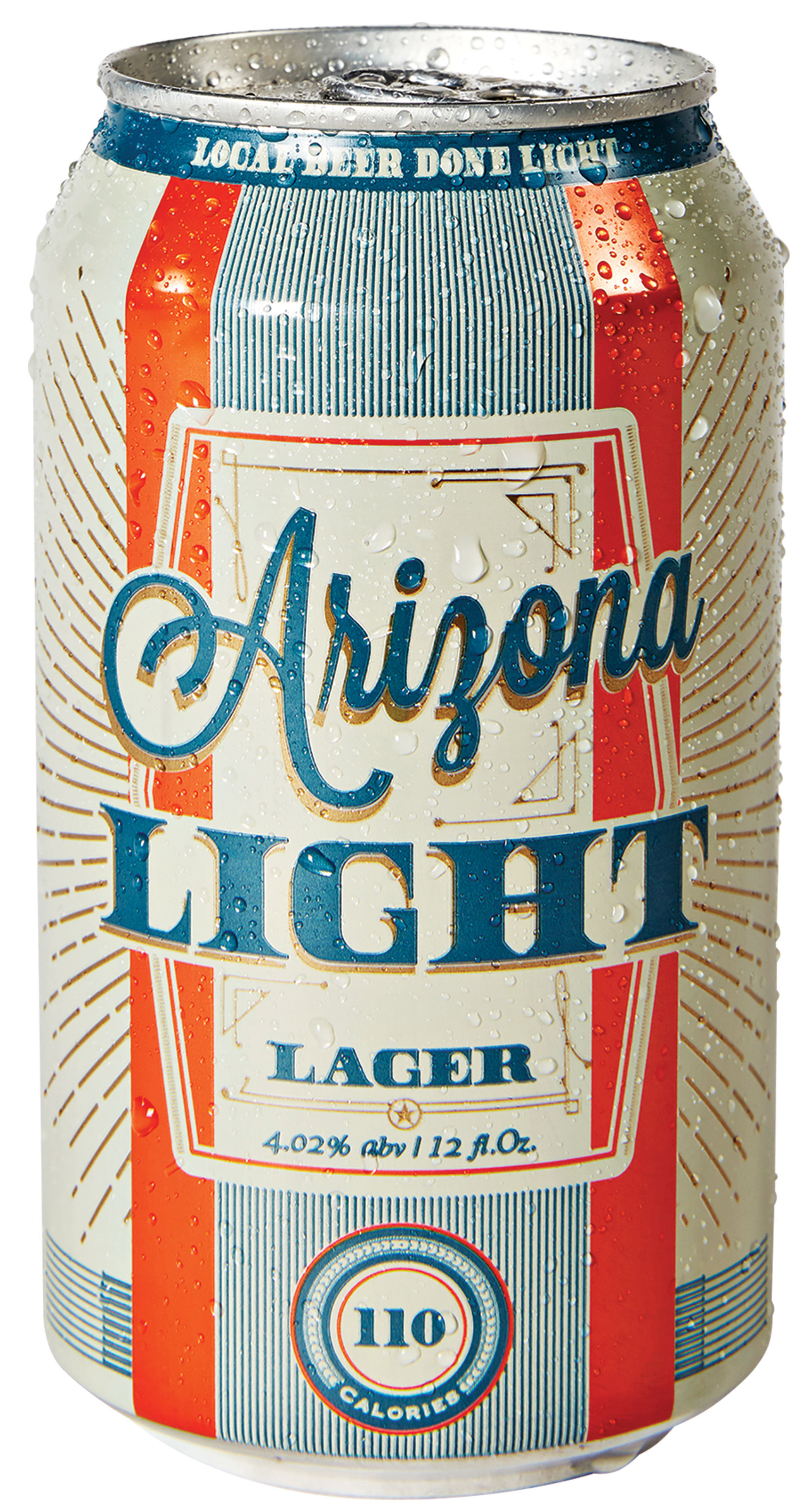 In recent years, health-conscious consumers have been eschewing big-name light beers in favor of fast-growing Michelob Ultra, which has even fewer carbs and calories. Sensing an opportunity, craft brewers are experimenting with light lagers and pilsners that offer ultra-low calories without sacrificing as much flavor.

North America’s $10 billion cannabis industry is predicted to quintuple over the next decade, and craft brewers want a piece. While most creations to date have been dank beers reminiscent of (but free of) cannabis, Flying Basset Brewing in Gilbert and Harbottle Brewing in Tucson have introduced beers with cannabidiol (CBD) – the non-psychoactive compound in marijuana that some users hail as a cure-all. 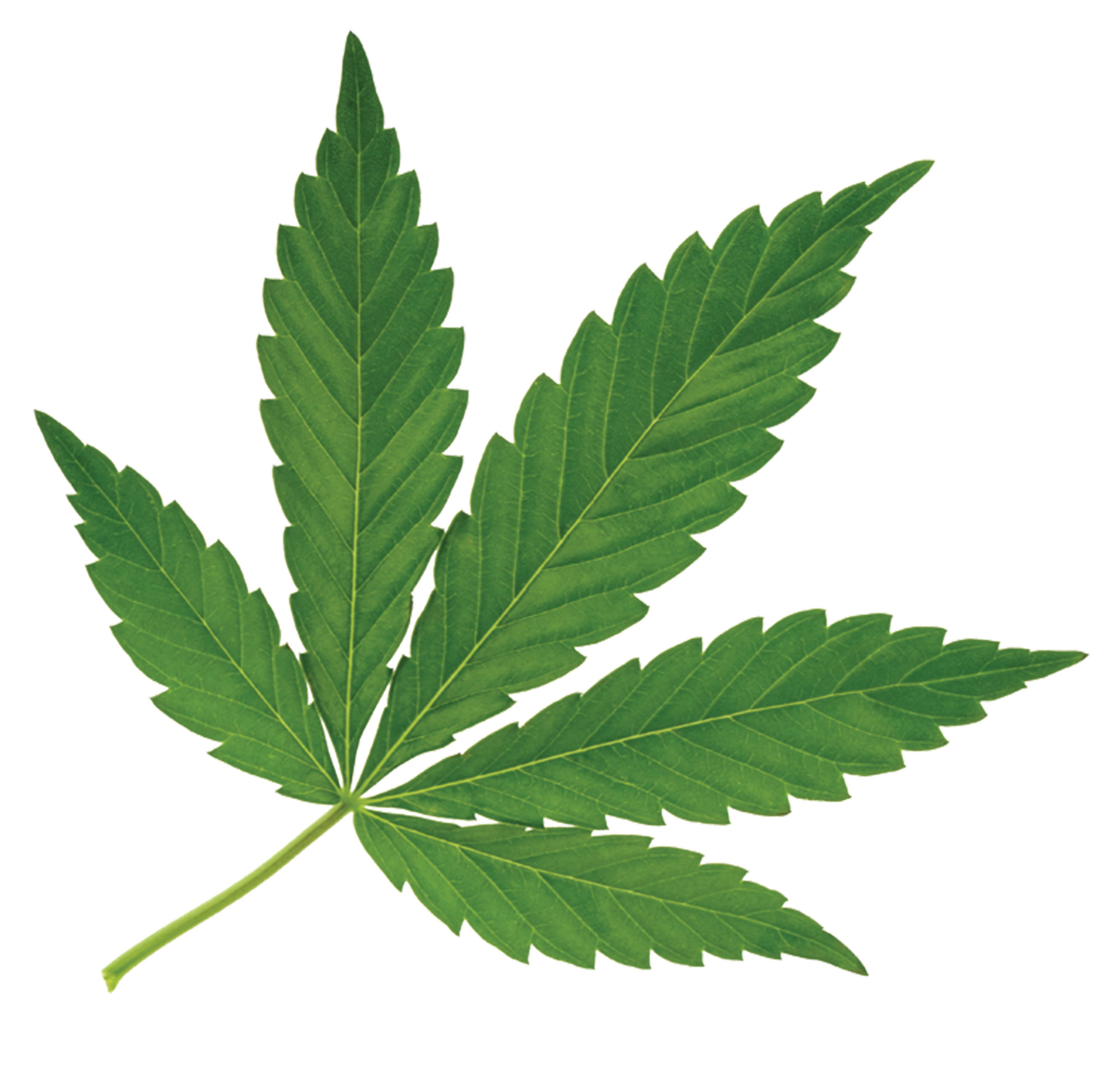 Behold, the scourge of beer purists – one of their many scourges, anyway. Though reviled by the intelligentsia, so-called pastry beers are proving to be a favorite of casual beer drinkers more attuned to doughnut shops than bittering hops. From s’mores to pecan pie to banana bread, there are pastry beers to satisfy just about any
sweet tooth. 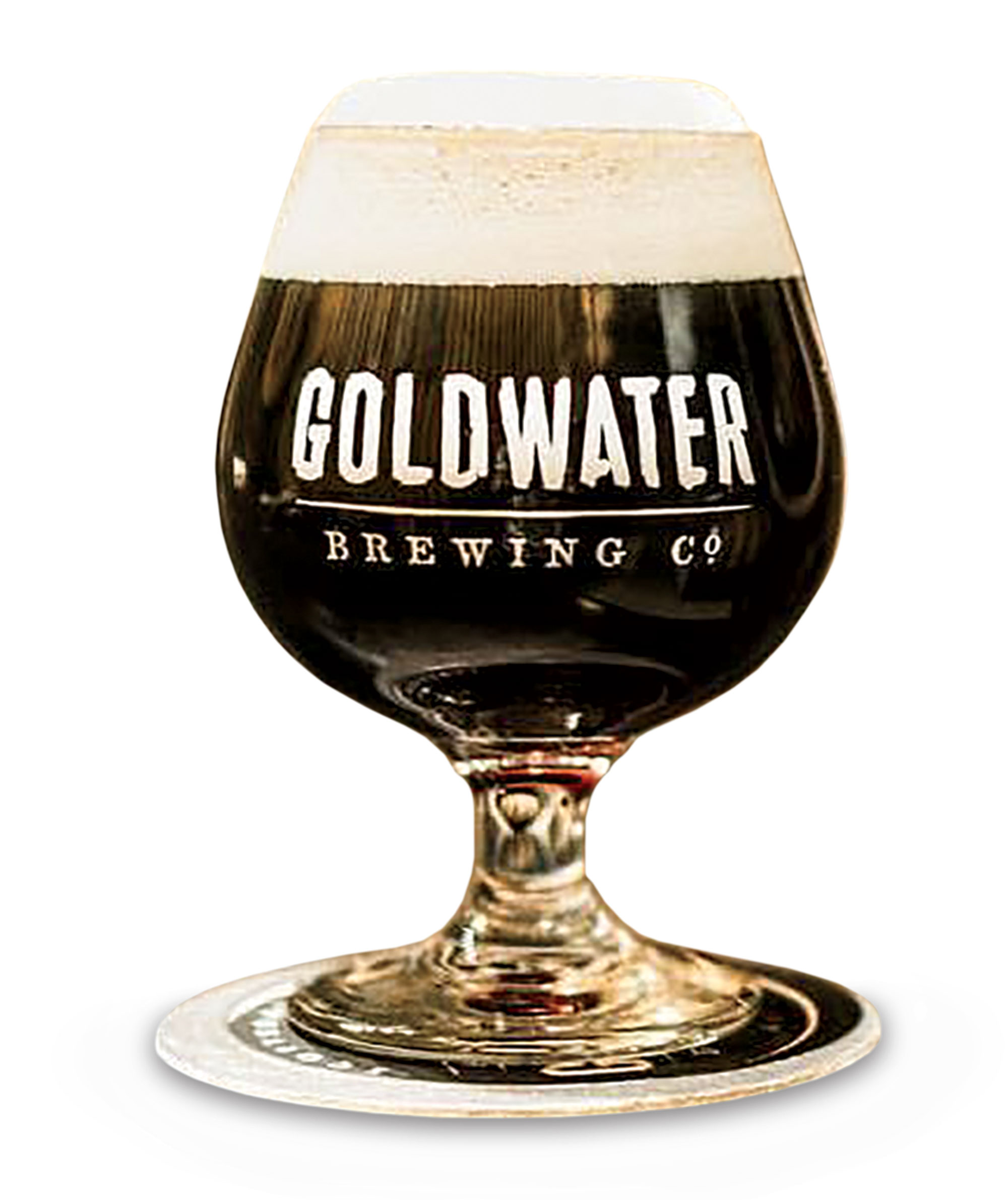 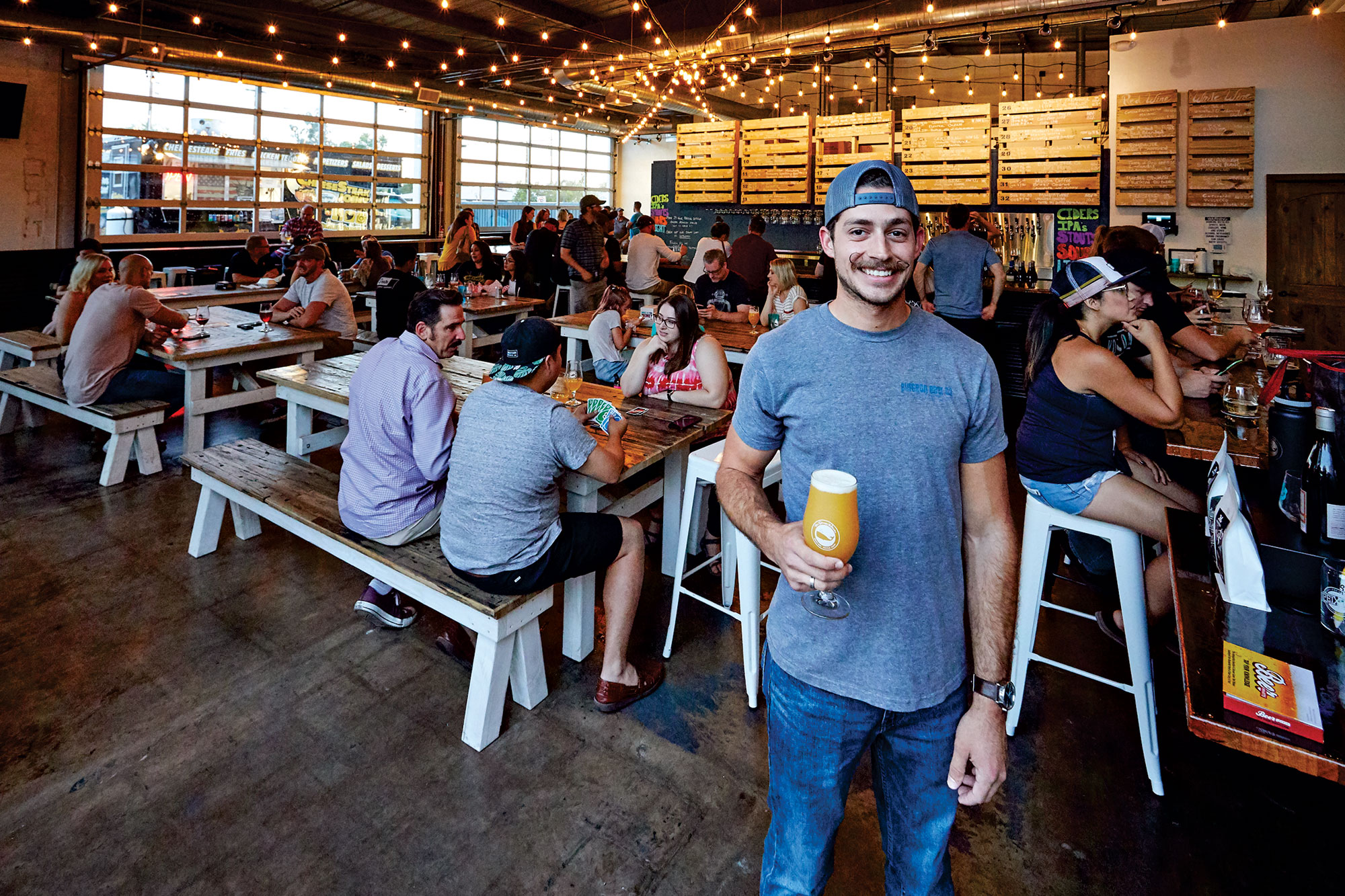 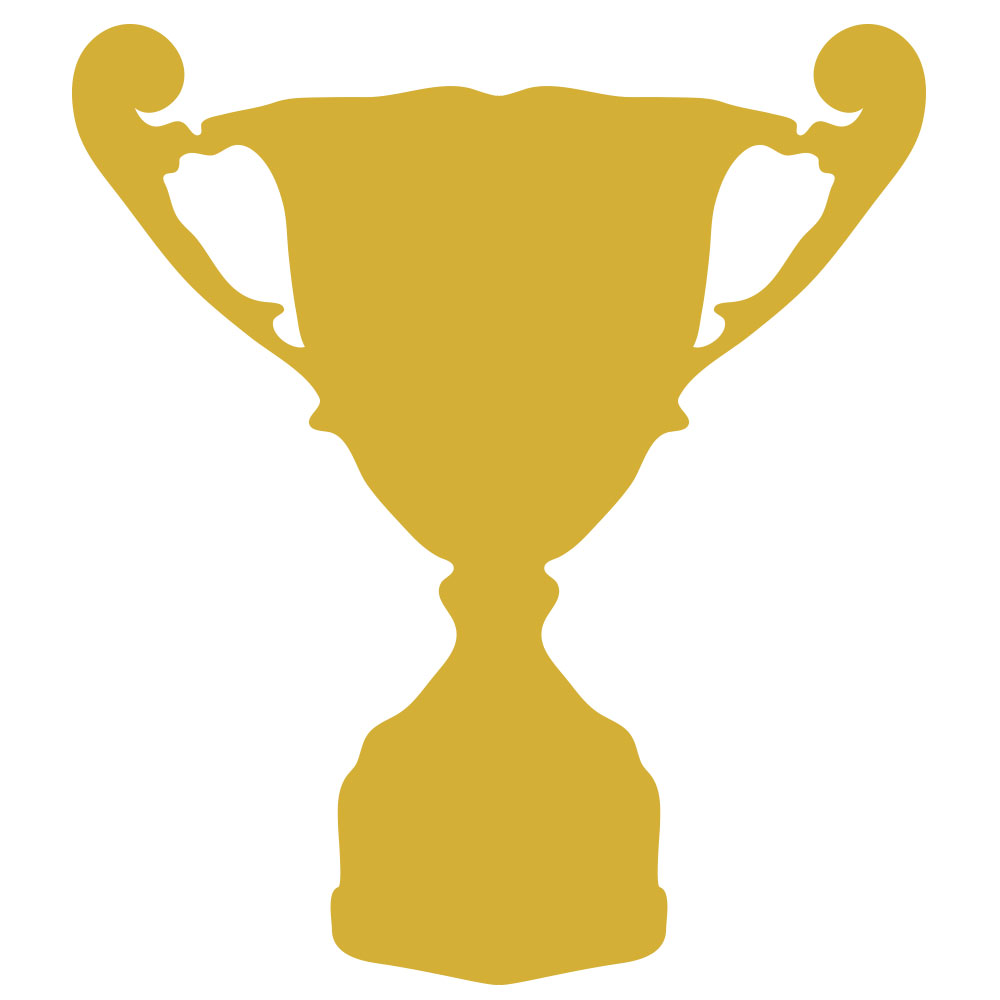 Honors won by Arizona breweries since we last checked in. 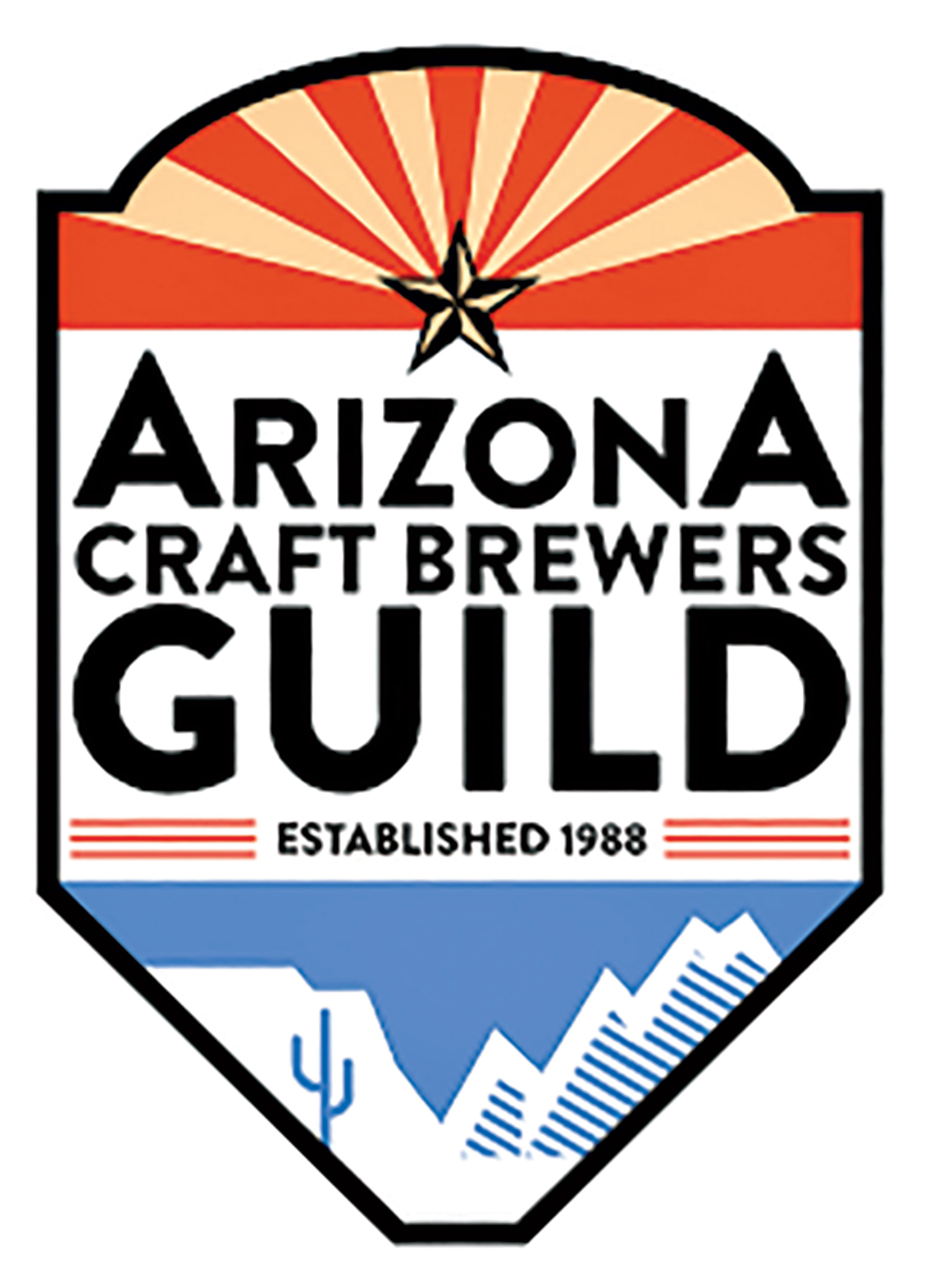 Real Wild & Woody Festival
No one has ever made better use of the Phoenix Convention Center than this Arizona Craft Brewers Guild event, which showcases barrel-aged brews and other specialty releases – in air-conditioned comfort. July 27. realwildandwoody.com

David Arnce (pictured below, far right) always has something brewing. After five years as a co-owner of Tempe-based Cartel Coffee Lab, he left the nationally recognized roaster-retailer to spin off the company’s fledging beer-brewing operation. The result was The Shop Beer Co., a craft brewery, taproom and beer garden that Arnce launched with Dylan DeMiguel (his brother-in-law and marketing chief, middle) and Jason Calhoon (head brewer, left) a few blocks west of Mill Avenue in downtown Tempe in 2016. We recently caught up with Arnce and DeMiguel while enjoying a pint of their flagship Church Music IPA.

If someone asked you to describe the current state of the Arizona craft beer climate, what would you say?

Arnce: “If I had to use a catchphrase, it would be ‘bursting with potential.’ Things are moving really fast. There’s a huge community of people literally cheering on all of the people that are brave enough to venture off into these crazy experiments, trying to make a living brewing beer.”

How has The Shop Beer Co. changed since opening its brewery near Tempe Town Lake?

DeMiguel: “I think we’ve become more experiment-oriented. We have a lot more seasonal products, specialty products. From a beer perspective, we’ve really grown – in our knowledge, in our variety of styles. From a brand perspective, we’ve gotten more creative, [like] in terms of can art.”

What’s the most interesting story behind one of your beers?

Arnce: “We made a beer called Golden Doodle. It’s a gold can with little kid-like drawings all over it – but those drawings are the artistic efforts of our staff. Every employee has one doodle on there… I can’t tell you how many times someone has asked a bartender, ‘Which one’s yours?’ And they’ll spin the can around and point, ‘That’s mine right there.’ And they kinda glow for a second.”

What don’t people know about your brewery that you wish they did?

Arnce: “We’re a family, and everyone contributes. All of our photography and merchandising? My wife, Mikel, does that. I do all the digital artwork. Dylan is our only outside sales rep. Jason is our head brewer. We don’t hire outside contractors. There are other ways to do it, for sure, but the way we want to do it is the best we can do it.”

Which Arizona beers, other than your own, are you drinking  and enjoying lately? 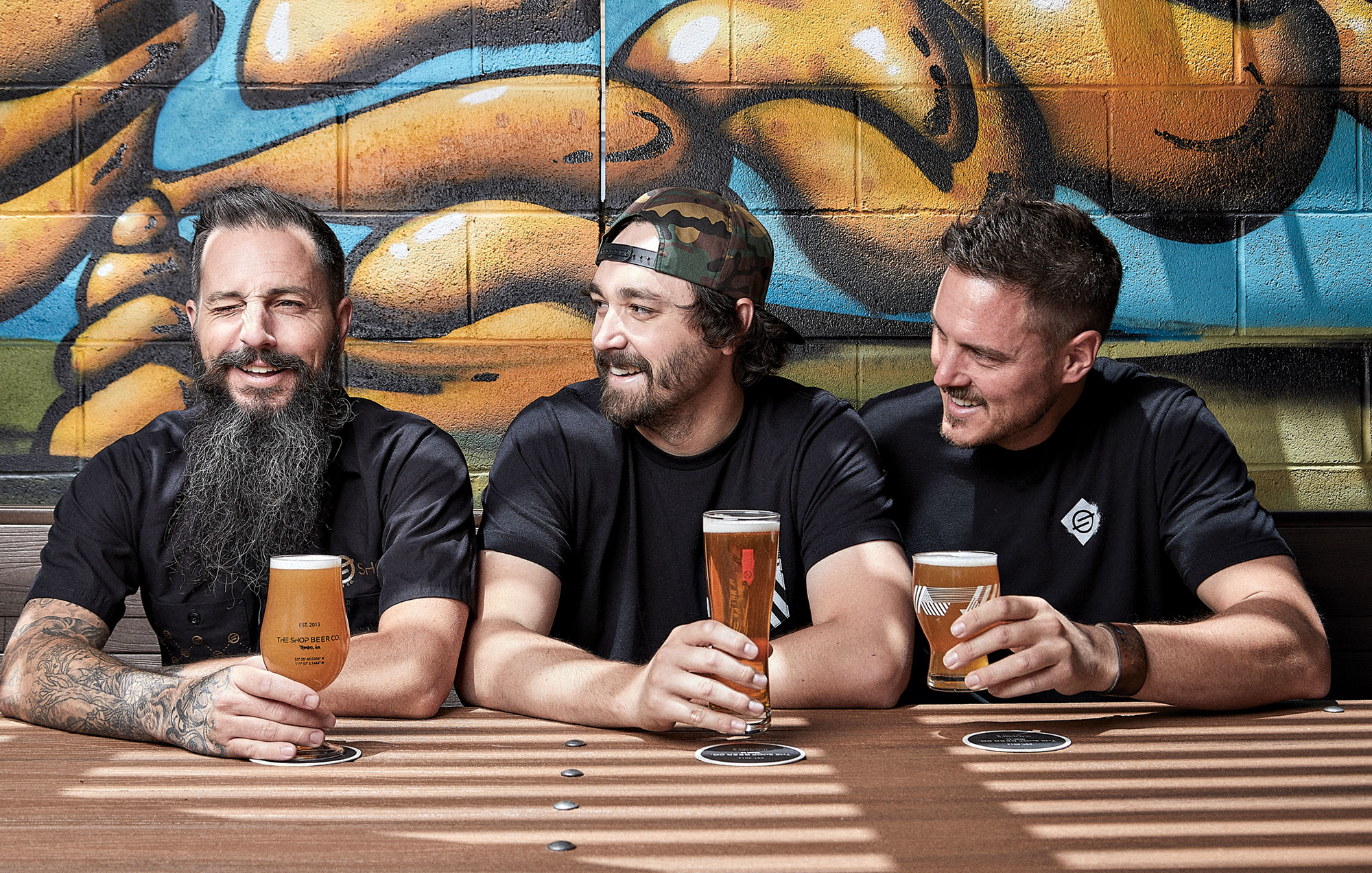 New Kegs on the Block

Staying current on the burgeoning local brew scene can be difficult, what with the number of licensed Arizona breweries recently crossing the 100 threshold, according to the Arizona Craft Brewers Guild. Find these sudsy startups – i.e. brewpubs and taprooms – here in the Valley. 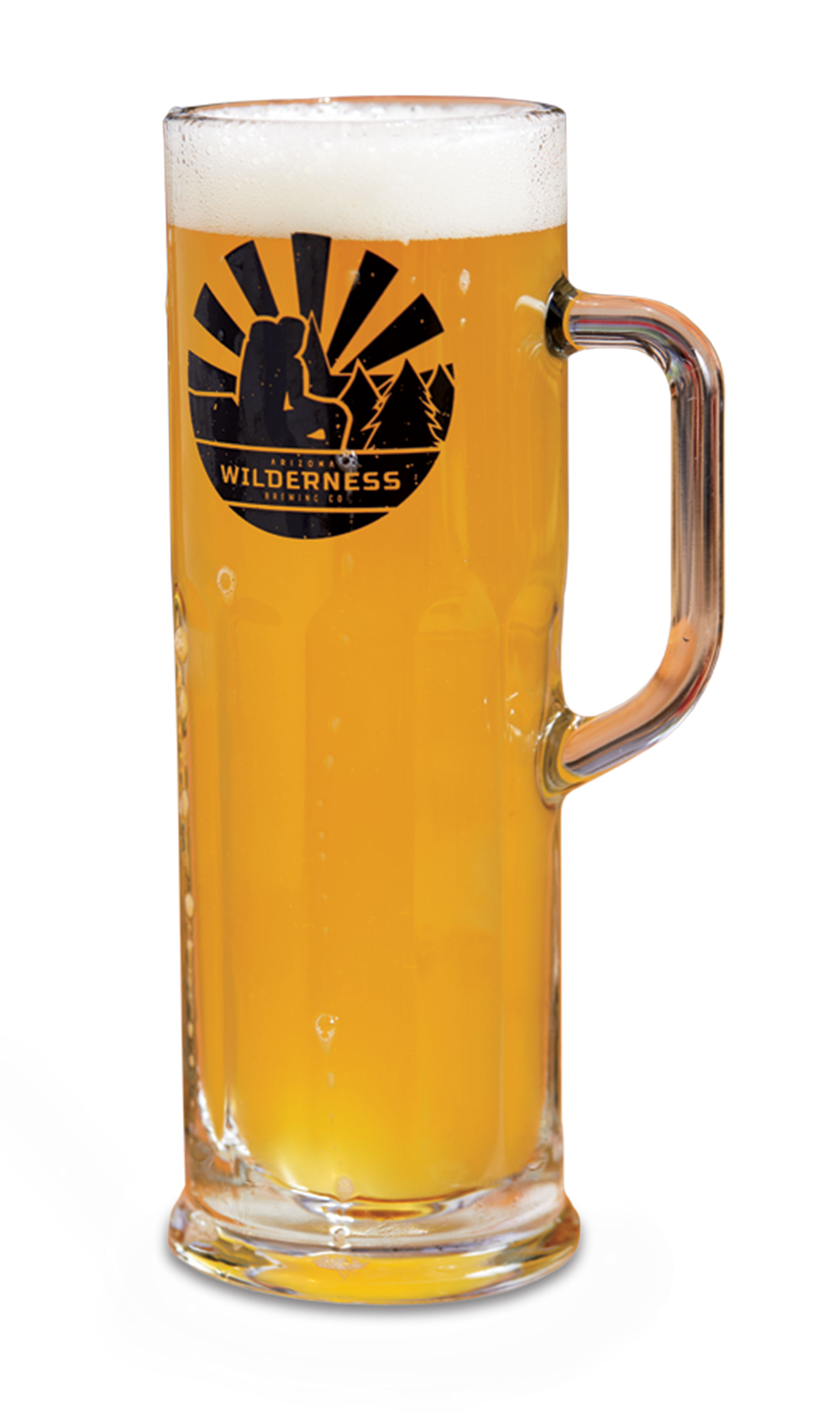 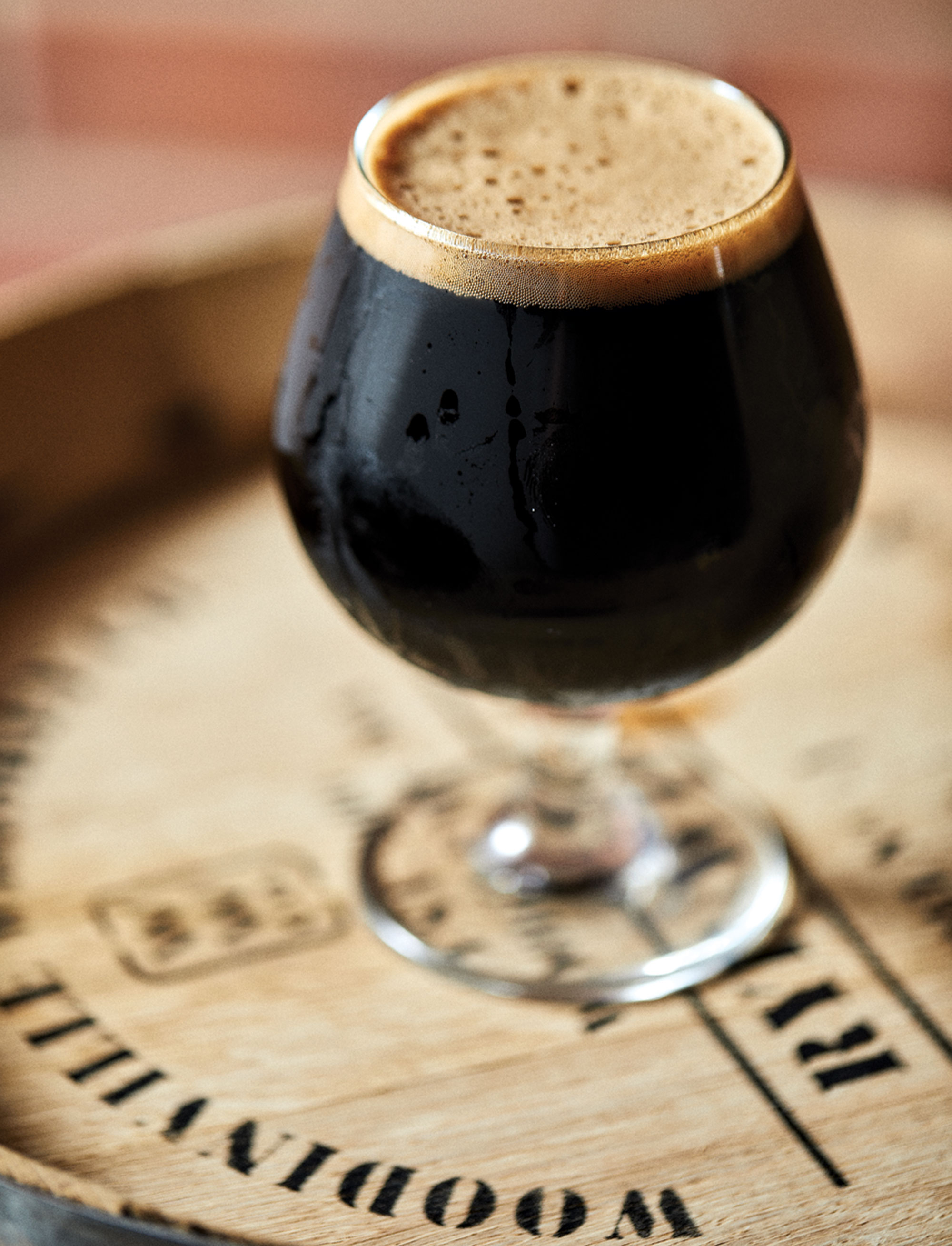 Walter Station Brewery
Opened: January 2019
This brewery bravely mixes alcohol and open flames to give guests an afternoon of beer and wood-fired pizza every day on its giant outdoor patio – set next to a converted fire station, naturally. It’s no wonder Walter’s slogan is “Where beer, friends and fire meet!”
4056 E. Washington St., Phoenix, 602-368-8402, walterstation.beer

Grand Avenue Brewing Company
Opened: May 2019
Step inside a 1940s sheet metal warehouse with exposed wood trusses – it’s been a tire distributor, a syrup company and a series of garages before peddling the sudsy stuff. The taproom is not only one of the coolest buildings to grab a bright draft beer, it’s a conversation starter on its own.
1205 W. Pierce St., Phoenix, 602-670-5465, grandavebrew.com

Edelweiss Biergarten
Opened: August 2018
At Edelweiss Biergarten, you can get your favorite beer with a side of wienerschnitzel. This family-run restaurant specializes in German and Hungarian cuisine, and on Thursdays, guests are treated to an accordion show.
2625 E. Bell Rd., Phoenix, 602-404-5919, edelweissphoenix.com

Bone Haus Brewing
Opened: May 2019
If you read Bone Haus and thought “Hmmm, I bet this brewery is trying to imitate a catacomb,” you would be correct. We hear its craft brews are to die for.
14825 E. Shea Blvd., Fountain Hills, 480-292-9541, bonehausbrewing.com 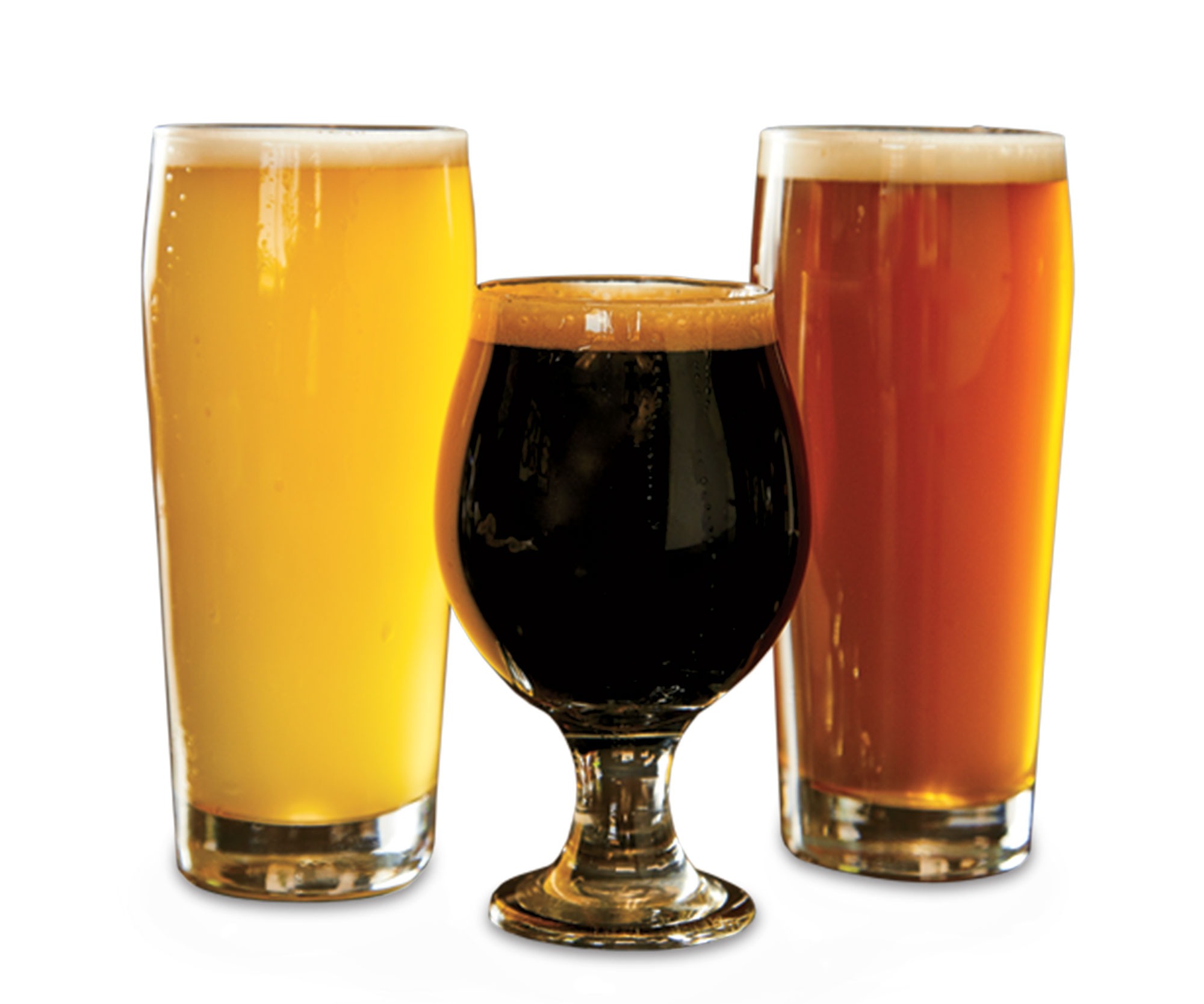 Alexander Phillips loves Old Bill Williams, the founder of Williams, Arizona – the town The Grand Canyon Brewing + Distillery calls home. “He was known for being cantankerous, surviving the harsh, unforgiving land of [the Arizona high country],” Phillips says. “So [he’s my] personal spirit animal.” Like Williams, Phillips – who guides marketing for GCB and functions as its R&D guru – is a modern-day frontiersman, helping The Grand Canyon Brewing + Distillery lead the way in Arizona craft brewing.

What are the pros of brewing in a small city?

What’s great about small towns is that they move slower… We’re not trying to rush you in and out. We’re not trying to make sure that 100 different people can get served the beer that day. You know, there’s plenty of room. It moves slow, it gives us time to work on big projects. We’ve got that hyper-locality.

What are the cons?

The cons are obvious. Freight is a nightmare. It’s taken us years to forge relationships that we can trust in shipping. Relevance is hard to maintain when you’re out of everyone’s eyesight. We have some really amazing beers, but it’s sometimes a quest to find us… When we get people out here, they’re blown away. But it takes some effort to get them here.

What does “summer beer” mean to you?

A summer beer to me is what we want [to drink while we’re] rafting in the river [or] hiking. And when you’re being active and you’re in the heat, hops and sugar just beat you down and make you feel lethargic. For me, I don’t like sweating out hops. I like something that when it hits my lips, it’s crisp, it’s refreshing.

What beers on the Grand Canyon menu best represent that?

Our American Pilsner, our Trail Hike IPA, and then for the summer we’re releasing a new beer called Sacred Saguaro Lager in 16-ounce cans for the very first time. And it turned out amazing. Now they’re a little more accessible for consumers to take them hiking.

In your opinion, what recent beer trend is played out?

I’m not a [session] IPA [fan]. I mean, I like drinking them on occasion, but I think it’s a bit played out. I don’t know if the volatility of the body of that beer – meaning that it’s usually best consumed as close to its production as possible, and a beer usually travels around a lot – is conducive over time. But I felt that [trend] got played out pretty quickly.

You have the most iconic Arizona name of all breweries. Is it a branding advantage?

The iconic name helps, but it kind of hurts us a little, too, because we got through a lot of trademark disputes. 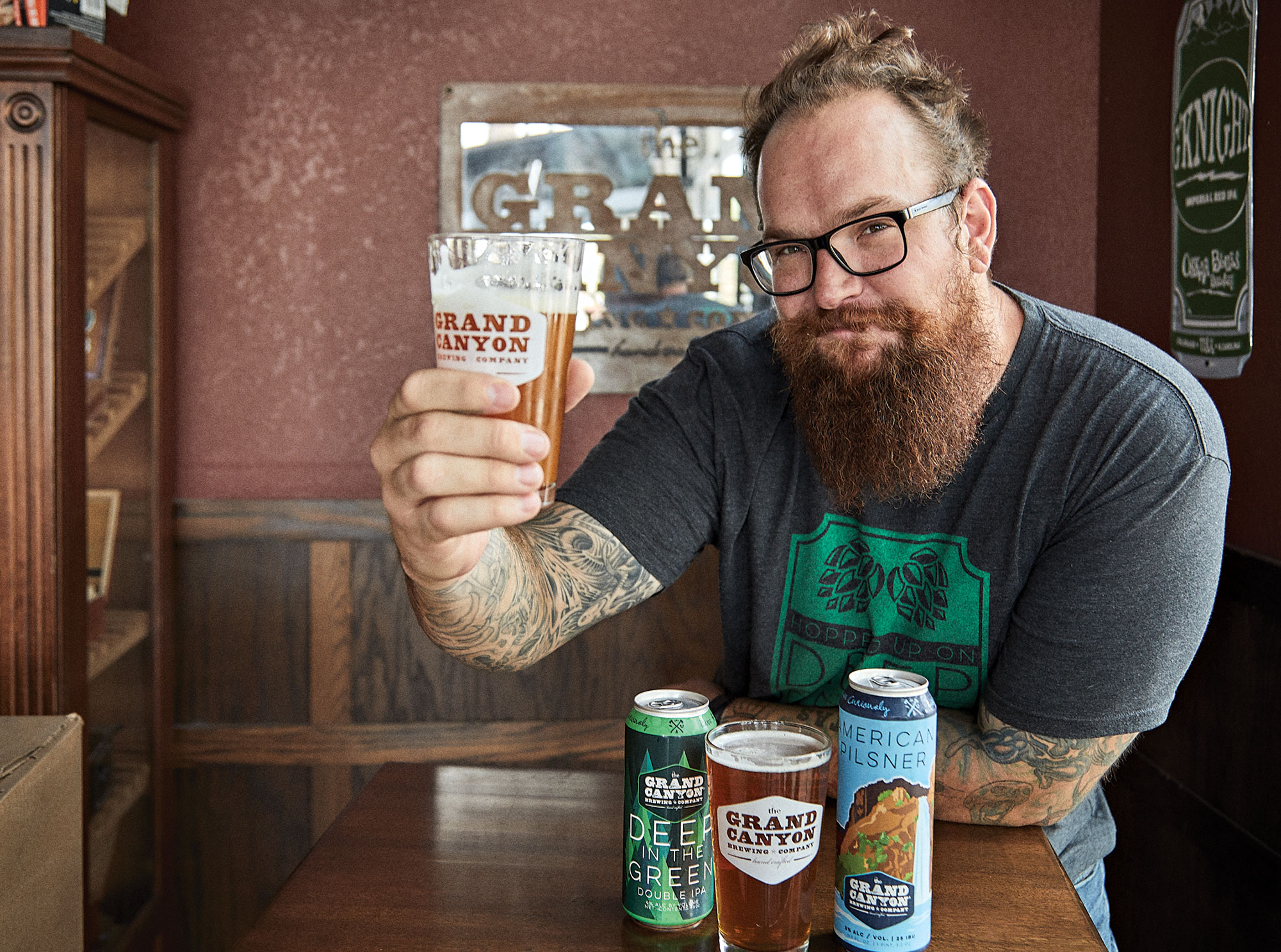 Over one furious afternoon of local craft brew tastings, the PHOENIX mag staff deemed these Arizona beers the most worthy of your summer attention.

Candidate beers were graded on a 0-100 scale factoring appearance, smell, taste, aftertaste, and drinkability. Only canned or bottled beers were considered. 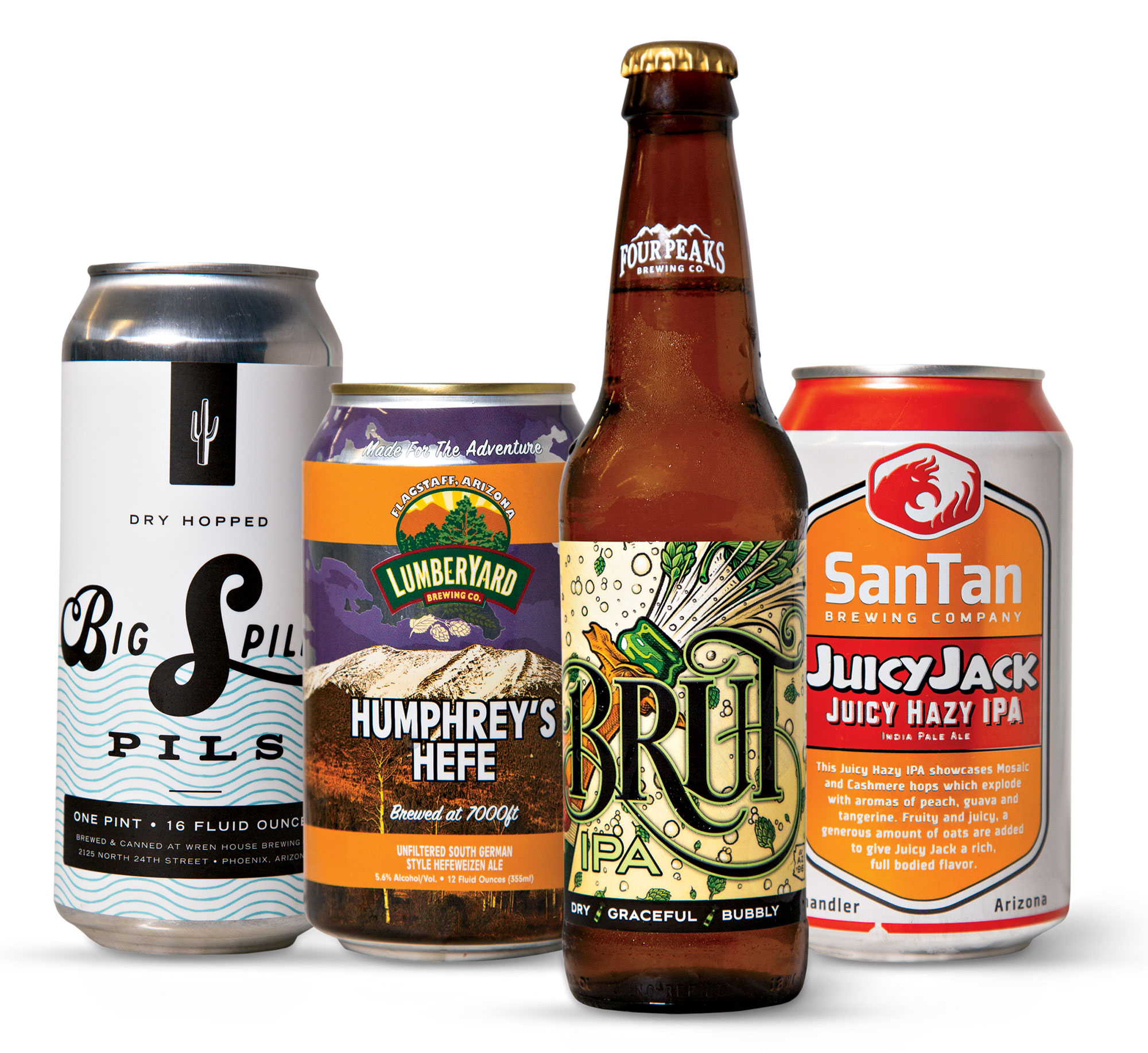 Big Spill Pils
German Pilsner/4.7% ABV
The panel loved the fine, lacy head and clean finish of the Phoenix brewery’s flagship pale lager. “Nice, bready flavor, too.” one drinker enthuses. “I don’t get fatigued by this one. Could drink it all weekend.”

Humphrey’s Hefe
German Hefeweizen/5.6% ABV
The Flagstaff brewery’s hefe is perhaps the best of its kind in Arizona, with ripe-banana richness on the mid-palate, a wisp of clove and good acid balance. “This is exactly what I want, when I want a German hefe,” says one panelist.

Juicy Jack
New England IPA/6.5% ABV
Similar to Four Peaks’ Brut IPA, this is the SanTan beer that even SanTan dislikers seem to like. “Big peach and tropical fruit aromas on the nose,” one panelist says. As hazy IPAs go, it’s not quite the equal of The Shop’s Church Music and Borderlands’ Toole Ave., but it’s dang good – and easier to find. 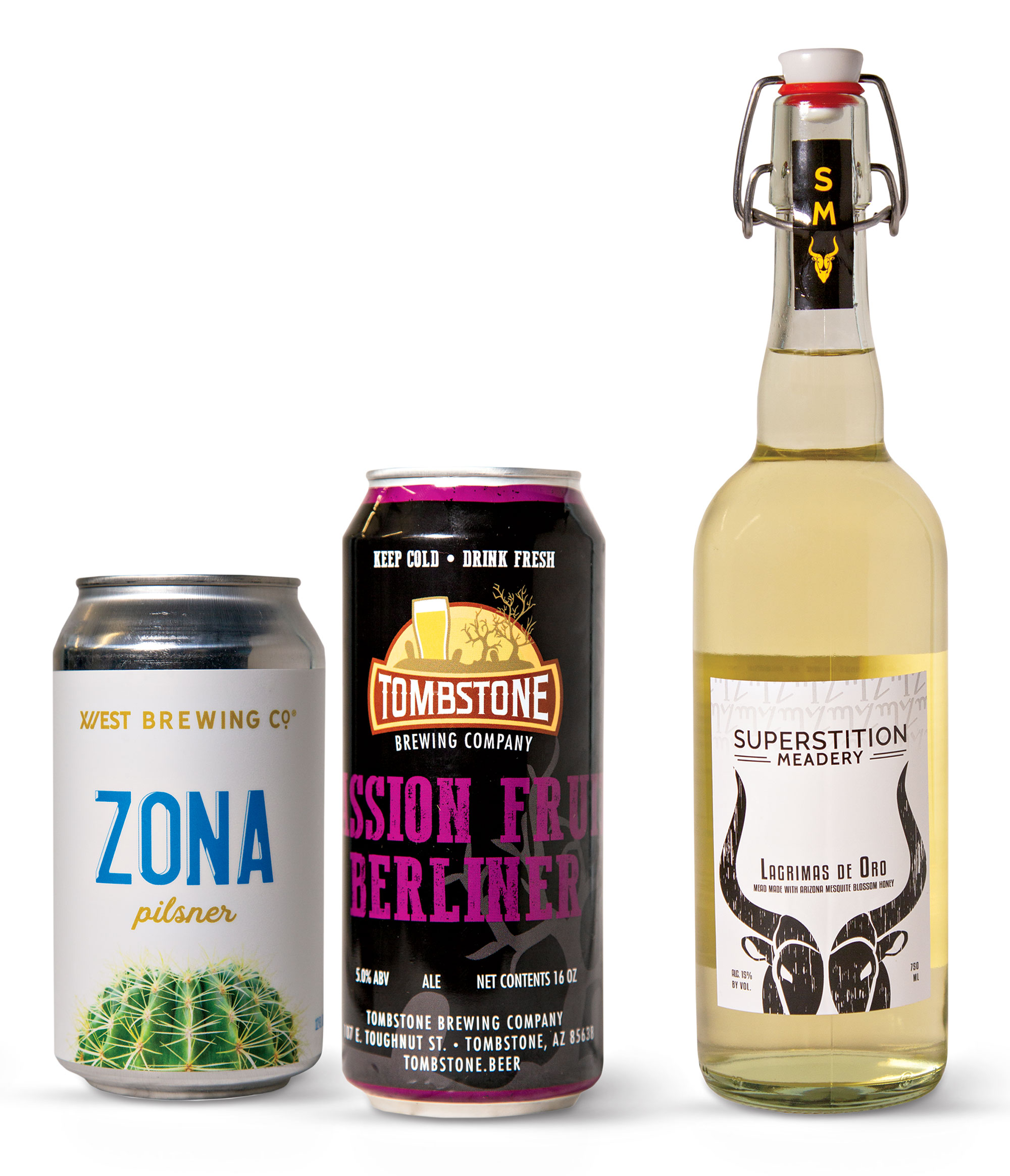 Zona Pilsner
American Light Lager/4.3% ABV
The lightest of Arizona’s ultra-style light lagers, it has a faint straw hue and wispy head that practically scream “volume drinker.” Says one panelist: “I get a sweet grain thing on the tongue. Tasty.”

Lagrimas de Oro
American Mead/15% ABV
Arguably the most admired of all Arizona’s beverage companies – it was named the 35th best brewer in the world by RateBeer in 2018 – the Prescott meadery boasts an impressive arsenal of summer sippers. Our favorite: this ethereal charmer made from mesquite honey, light gold in color and ripping with melon flavors.