“It’s really odd to hear somebody portray your mother, and hear her words coming out of their mouth.” 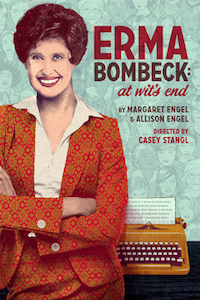 But Betsy Bombeck has had this odd experience three times now, seeing actresses play the role of her mother, the legendary family humor columnist (and Valley resident) Erma Bombeck, in various productions around the country of Erma Bombeck: At Wit’s End.

“Her legacy is that she was able to make people laugh at life,” says Betsy of Erma, who passed on in 1996 at the age of 69. “Not just as a housewife. I think in some ways she’s very timeless. I’ll pick up one of her books now and think, families have the same struggles now as 25 years ago.”

The current production of the one-woman show, by Arizona Theatre Company, opens this weekend at the Herberger after a run starting October 10 in Tucson. Betsy Bombeck and her brother Matt will be present for post-show discussions after several performances of the Phoenix run, which continues through December 2.

Of the actresses she’s seen in the role, Betsy Bombeck says “They have all captured the essence of her.” That includes Jeanne Paulsen, from ATC’s production.

“I’ve never done a one-woman show before,” says the Broadway veteran and Tony nominee. “And it’s a different kettle of fish. It’s lonely, for one thing.”

Paulsen went into the production, however, already an Erma Bombeck fan. “I didn’t read the news or anything, but I read her. I knew she was a columnist, but I did not she was in 900 newspapers. I knew she had campaigned for the Equal Rights Amendment, but I didn’t know that some people think that if they’d gotten her involved earlier, it might have passed.”

One wonders what Erma Bombeck might have made of the current political and social scene, and indeed might wish for her characteristic take on it.

“I wish that all the time,” admits Betsy Bombeck. “I’ll see something on the news, and I’ll think, ‘God, I wish she was here, or I could channel her.'” She’s sure that her mother would never have run out of material, from the public to the personal. “She could take one little thing, and get a whole column out of it. She had grandchildren after she passed. What she could have gotten, just out of that, would have been wonderful.”

Erma Bombeck: At Wit’s End plays from November 15 through December 12 at Herberger Theatre Center. Call 602-256-6995 or go to arizonatheatre.org for details and tickets.