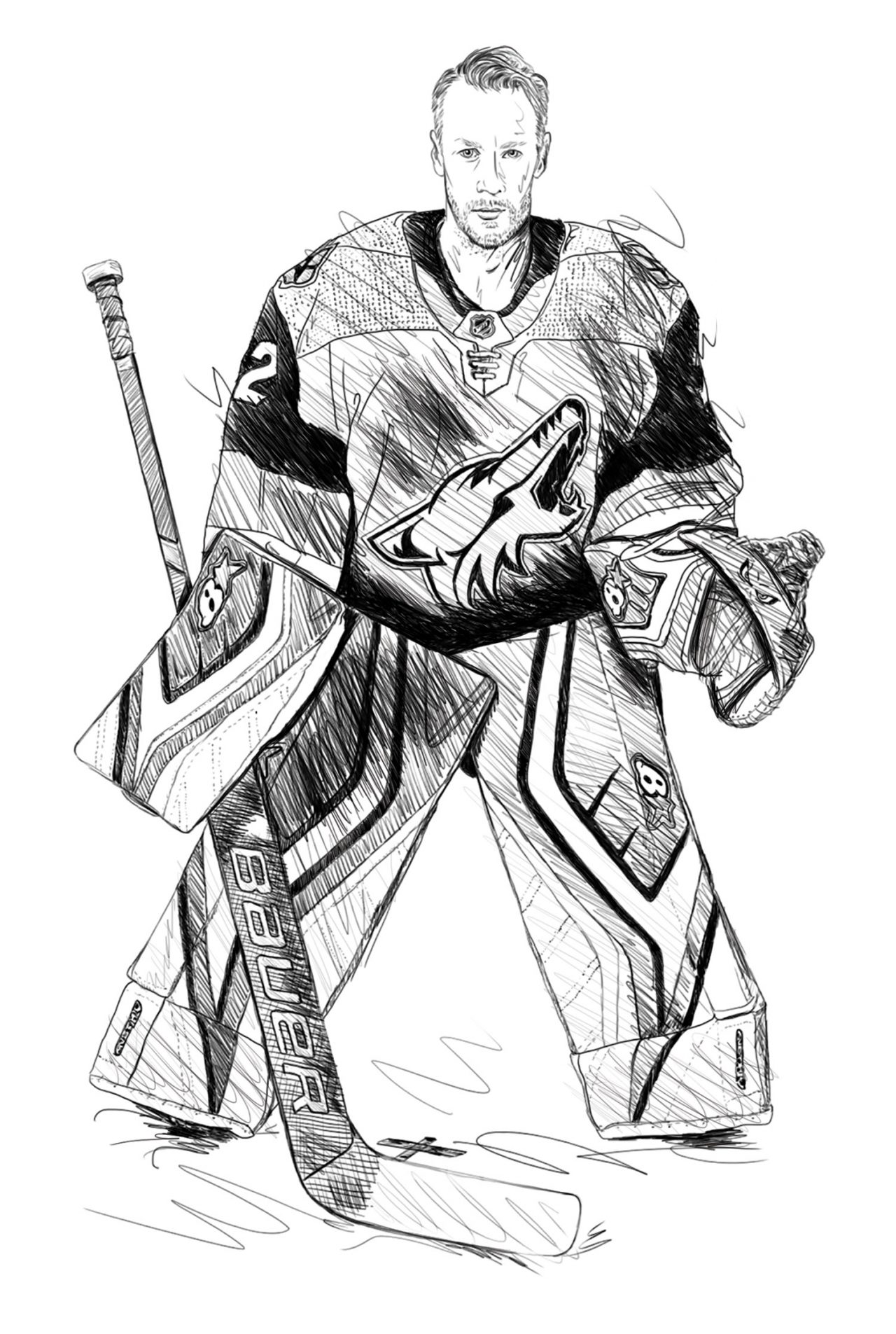 Goalie Antti Raanta was a bright spot in a dark season for the Arizona Coyotes. The team had a conference-worst 29-41-12 record in 2017-2018, but finished strong (14-4 over the season’s last two months) due in no small part to Raanta, who ranked second in the league in goals against average (2.24) and save percentage (.930). Despite missing almost half the team’s games due to a concussion and knee injuries, the 29-year-old had a hand in 72 percent of its wins – evolving into the kind of lock-down goaltender the Coyotes envisioned when it acquired him from the New York Rangers in a draft-day trade two summers ago. Anchoring a defensive unit that coach Rick Tocchet describes as the “heart” of the team, Raanta finds himself in the running for the Vezina Trophy – the NHL’s top award for goalies – as the Coyotes skate into the 2018-2019 season. We slapped a few questions at the ace puck-stopper about his pre-game method and love of a good EDM song, and thoughts about his home country of Finland.

1. What was your highlight last season for the Coyotes?
Probably when I played our first shootout against Edmonton. It was a crazy game that ended 1-nothing or 2-nothing for us. It was great to have a shootout in our home game. That jumps out the most.

2. What do you do to get pumped up for a game?
Usually when I drive to the rink, I listen to some music – random songs from Spotify – and that usually gets me going. I listen to a lot of EDM, just put a shuffle on and go with the moment and we see what comes up.

3. What’s been your biggest athletic challenge?
I think last year was tough – a lot of injuries, and you have to do a lot to get back to the game condition. But I think that also helps me realize what I need to work on and how I need to prepare my body. The biggest thing right now is just when you’re traveling a lot and sitting on a plane, and that’s not the best way to recover. Work out when you have a chance to work out.

4. What are you excited for this season?
We want to have a good start. We were pretty much done last year [at this juncture], so I think right now the whole group is excited to go [to the playoffs] and have some fun. We’ve been playing good. It [will be] fun to prove to everybody that we can make the adjustments to play in the playoffs, and it’s a lot of excitement to go every day. Every day is a new day, and you have a chance to do something good for the whole organization.

5. Who is your hockey hero?
Obviously, coming from Finland, when I was young, [it was former Coyotes star] Teemu Selanne. He was already scoring 76 goals in one year when he was a rookie. Then there was Martin Brodeur. [He] was kind of like my idol who I looked up to, and obviously it was great when I played my first season and I got to play against him in Chicago. And we won the game, so it was a nice moment to beat your idol. I’ll remember that forever.

6. What do you miss most about Finland?
My whole family, besides my wife and daughter, are in Finland. Sometimes [I] miss how some things are a little bit easier in Finland than the U.S. [Even] writing a check is harder here. Sometimes I do miss my hometown [Rauma] – it’s only 38,000 people, and everything is so close.

7. What is your favorite Finnish dish?
There’s a lot of good food in Finland. My wife is cooking the Finnish food usually at home… We have a really good restaurant back at home where they have a filet mignon steak and a really good pepper sauce on that, and maybe french fries… Some of the traditional food is the biggest for me – I pretty much miss when my mom comes here for Christmas. When [my] mom is cooking for me, that’s what I miss the most.