Around the country, fall is in full effect – cider, apples, foliage, the whole shebang. In Phoenix, we’re just venturing outside again after a particularly hellish and uncharacteristically muggy summer. In our westerly neighbor of Southern California, summer – the good kind – is having its last hurrah in the form of the poetic if not politically correctly named Indian summer, an unseasonably warm stretch that lingers into autumn like a sunset melting into the ocean.

The friendly little surf town of Ventura, which lies between Santa Barbara to the north and Los Angeles to the south, is an ideal destination for one more beach getaway before blustery winds make a wet suit necessary for hitting the waves. With plentiful flights from Phoenix Sky Harbor International Airport to Hollywood Burbank Airport (hollywoodburbankairport.com; less congested than Los Angeles International Airport), an ocean plunge is a quick flight (about an hour and 20 minutes) and hourlong shuttle ride away. 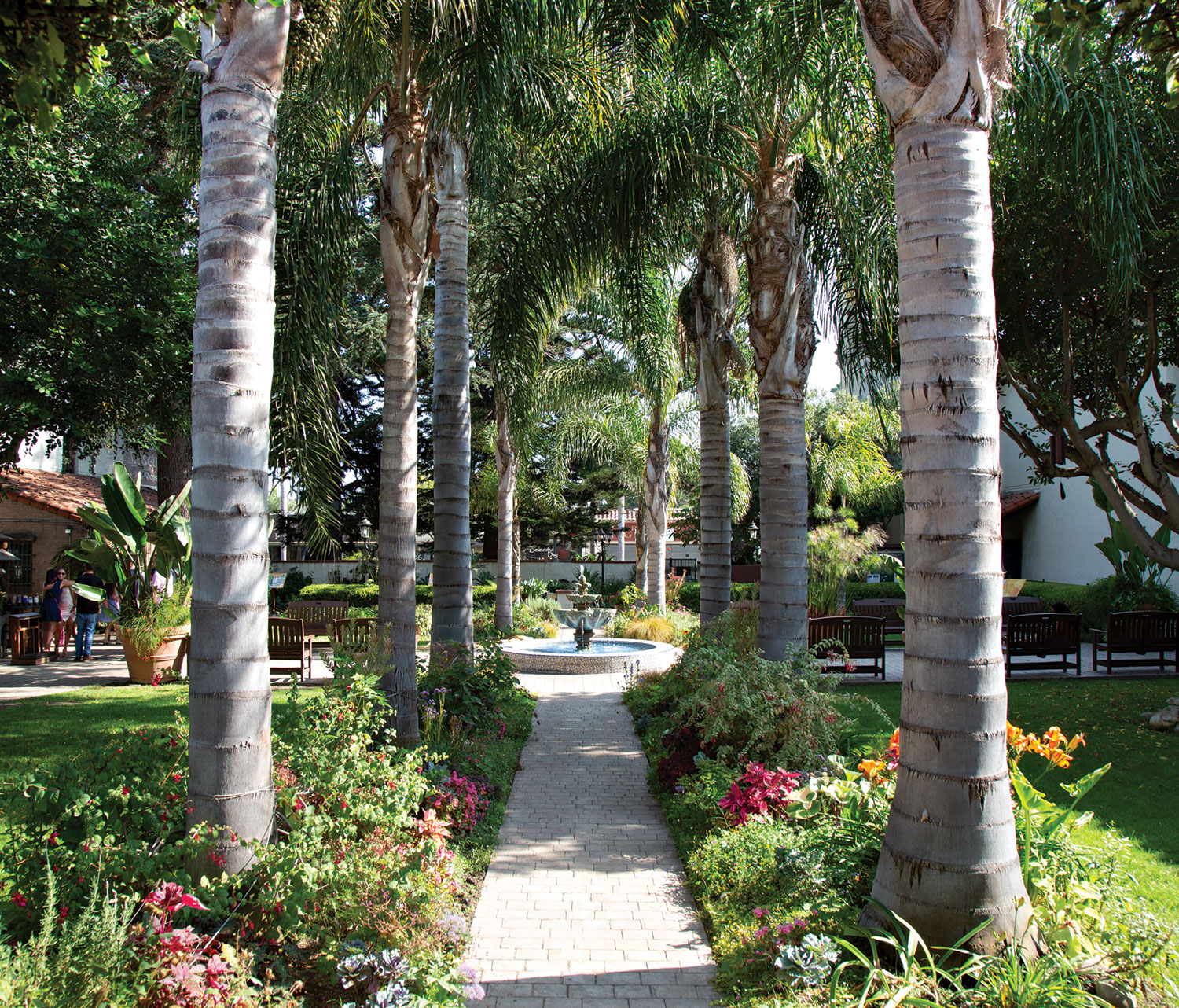 RIGHTEOUS HISTORY
Like many cities in California, Ventura sprang up around a Catholic mission. San Buenaventura Mission (211 E. Main St., 805-643-4318, sanbuenaventuramission.org) was established by Franciscan priest Junipero Serra on Palm Sunday in 1749 to minister to the native Chumash people. The mission remains a point of interest in Ventura as a historical relic, museum and active parish, since the chapel still holds daily mass and the preschool-to-eighth grade Holy Cross School operates on-site. San Buenaventura is the ninth mission established in California, and it’s the sixth stop on The California Missions Trail (parks.ca.gov), which snakes up the coast along Highway 101 – roughly the same path as El Camino Real, the road colonists and missionaries traveled in the 18th century – and includes 21 missions. San Buenaventura recently made headlines for nabbing one of 100 Vatican-licensed replicas of Michelangelo’s “La Pietà,” which were all marble-casted from the same Carrara quarry as the original.

One of the mission’s external walls is home to the sprawling Ventura Historic Mural, which depicts the history of the city in ceramic tiles. Local artist Michael O’Kelly began work on the colorful piece in 2016 to celebrate the city’s 150th birthday. It starts with Chumash voyagers and ends with the Thomas Fire, which hit Ventura in December 2017 and decimated 500 homes and the Ventura Botanical Gardens. It’s a quick but impactful introduction to the city, and worth a stop.

BEACH BREAK
It’s no resort, but the Crowne Plaza Hotel (450 E. Harbor Blvd., 805-648-2100, cpventura.com) has resort-quality customer service and the best hospitality real estate in Ventura: right on the beach. Toss a trashy book in your beach bag and hunker down for an afternoon of sun and sand, or take a walk to the Ventura Pier and Promenade (visitventuraca.com), one of the oldest wooden piers in the state (built in 1872 and restored in 1993). Walk all the way to the edge for beautiful views of the harbor and the Channel Islands (see end of story below). 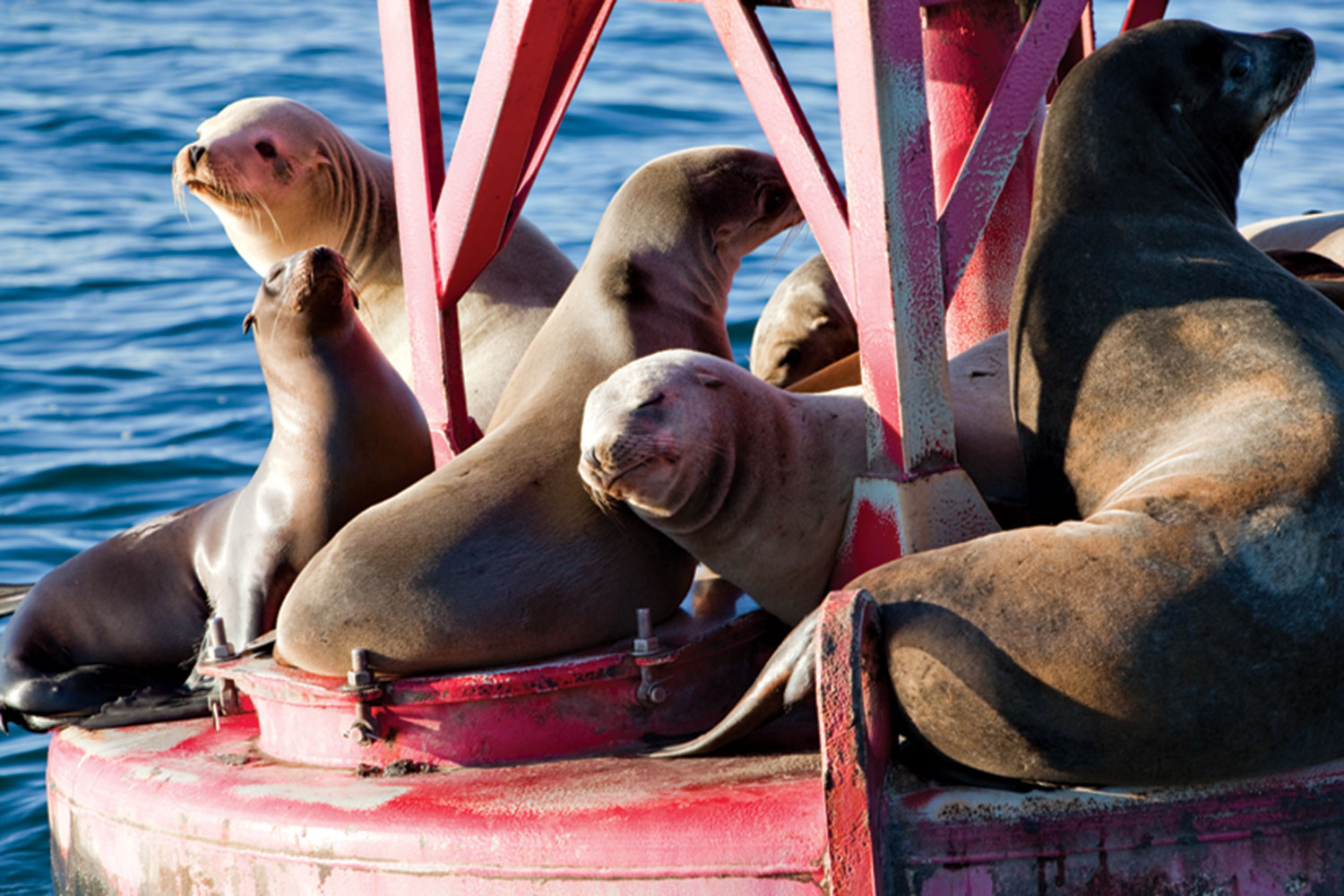 On the other side of the harbor lies Ventura Harbor Village (1583 Spinnaker Dr., 805-477-0470, venturaharborvillage.com), a cluster of shops, restaurants and venues hugging the marina like a coral reef. It’s a town within a town, and you could easily spend an entire weekend exploring, from harbor tours and paddleboat and kayak rentals at Ventura Boat Rentals (1575 Spinnaker Dr., 805-642-7753, venturaboatrentals.com) to comedy and jazz shows at Ventura Harbor Comedy Club (1559 Spinnaker Dr., 805-664-1500, venturaharborcomedyclub.com). For sustenance, we suggest breakfast crêpes with a marina view at Le Petit Café Bakery (1591 Spinnaker Dr., 805-642-1191, lepetitcafebakery.com); lunch at Andria’s Seafood Restaurant & Market (1449 Spinnaker Dr., 805-654-0546, andriasseafood.com), whose fish and chips were named the second best in the U.S. by Coastal Living; a taiyaki – fish-shaped waffle cone – filled with house-made ice cream at Coastal Cone (1583 Spinnaker Dr., 805-658-2837, coastalcone.com); and dinner and dancing at The Copa Cubana (1575 Spinnaker Dr., 805-642-9463, thecopacubana.com), a Cuban restaurant with great happy hour deals. Nearby Harbor Cove Beach offers the best swimming in the area since its waters are protected by jetties, and Surfer’s Knoll Beach is a haven for wave-chasers.

Do yoga on or near the beach with Ventura Pop Up Yoga (venturapopupyoga.com), which “pops up” all over town to offer donation-based yoga classes for the community (suggested donation: $10). Adventurous yogis can try stand-up paddleboard yoga at the Leo Robbins Sailing Club on the edge of Marina Park, or book a yoga retreat to the Channel Islands (see sidebar). 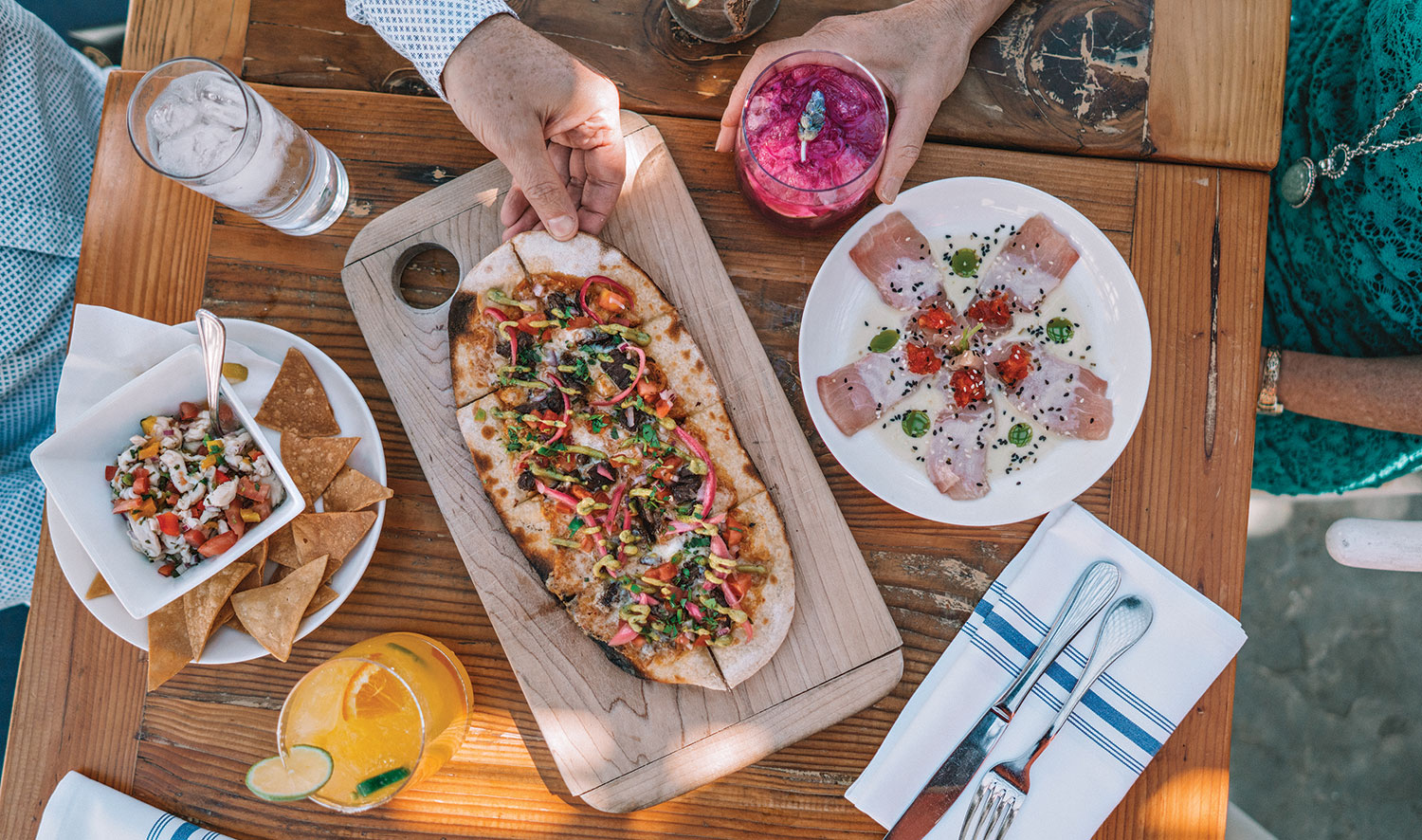 Looking for a traditional seafood splurge? Lure Fish House (60 California St., 805-567-4400, lurefishhouse.com) is the place to see and be seen feasting on charbroiled oysters and tucking into lobster ravioli with Chardonnay sauce. Less fancy, but a whole lot of fun is VenTiki Lounge & Lanai (701 E. Main St., 805-667-8887, ventikiloungeandlanai.com), a tiny tiki bar where the chill staff slings Spamageddon sliders and kalua pork tacos alongside classic tiki drinks like Mai Tais, Zombies, Navy Grog and Jet Pilots. Order the latter, an explosion of citrus and rum, and the bartenders dim the lights, blast soaring music and shout “Jet Pilot!” which in-the-know regulars echo back. It’s kitschy fantasy, and a welcome reprieve from pretentious “mixology” labs.

California wine is a source of pride in Ventura, which is a short drive from the growing regions of Los Olivos, Paso Robles and San Luis Obispo. Paradise Pantry (222 E. Main St., 805-641-9440, paradisepantry.com) is a restaurant, cheese counter and wine shop that was one of the first in Ventura to offer wine and cheese pairings. They even offer nonalcoholic Vignette Wine Country Soda, so teetotalers can #roséallday. 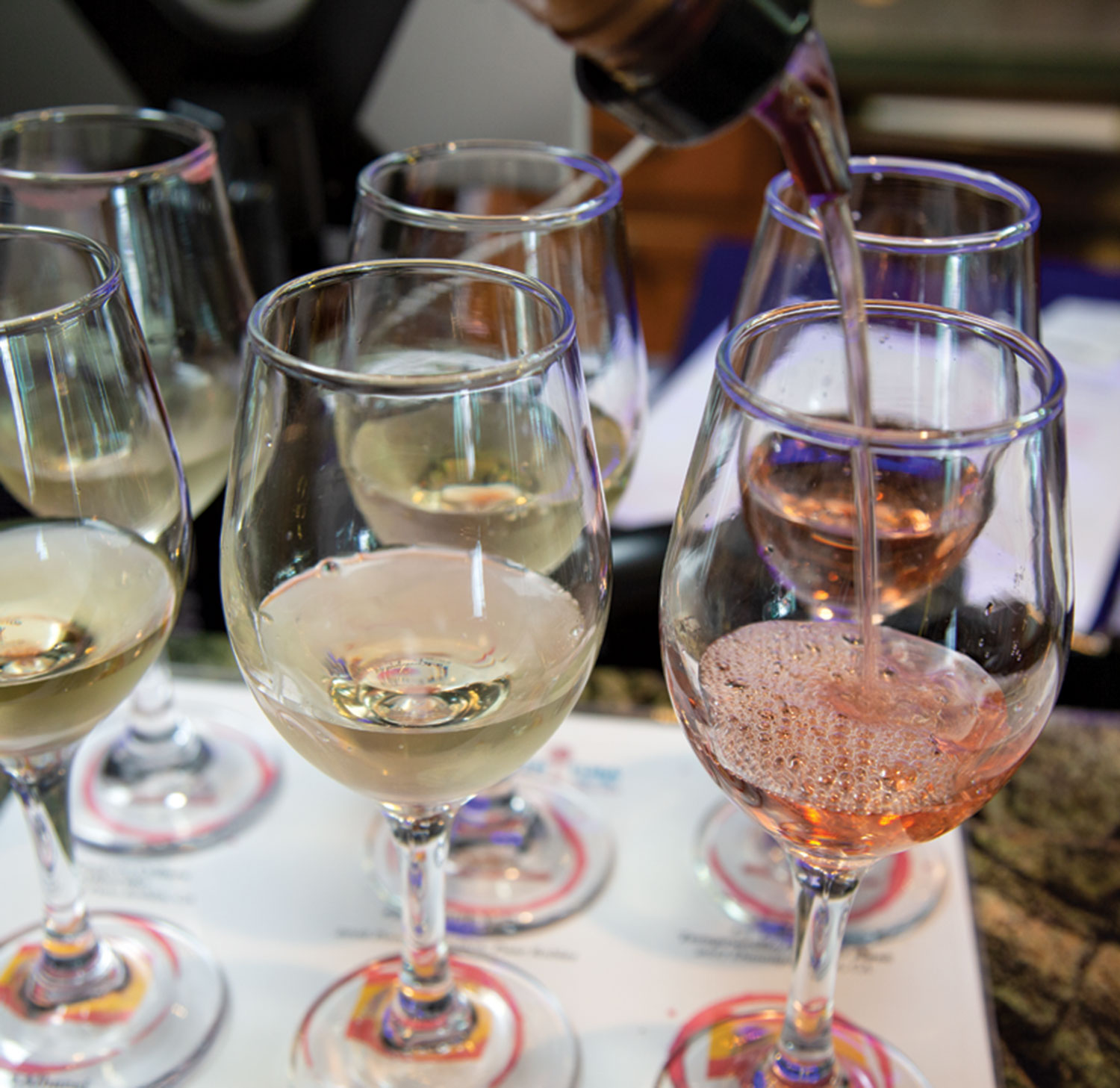 Back in Ventura, the shop offers its monthly Wine Wars, which pit two winegrowing regions against each other in a tasting of the same varietals. During our visit, Spain beat California in a head-to-head battle of Albariños, Verdelhos and Tempranillos. The Golden State’s grapes will face off against Italy or France this month (the final choice was to be determined at press time).

Any way it shakes out, you can’t beat an affordable wine tasting ($20 for six generous tastes) followed by a meandering walk to the beach to bask in the last balmy nights of October.

CHANNEL ISLANDS NATIONAL PARK
Often called North America’s Galápagos Islands because of their biologic diversity and protected isolation, California’s Channel Islands are just 11 miles off the coast of Ventura. Pop into the Robert J. Lagomarsino Visitor Center (1901 Spinnaker Dr., 805-658-5730, nps.gov/chis) for marine wildlife encounters and an educational film narrated by Kevin Costner, who spent many of his formative years in Ventura. Then, choose your Channel Islands excursion.

Channel Islands Aviation
Soar over the Pacific and see the islands from a gull’s perspective in private flight packages, which start at $1,200. flycia.com

Yoga in the Wild
Ventura Pop Up Yoga hosts weekend yoga retreats on Santa Cruz island, which include yoga, meditation, hiking and kayaking ($395 per person). venturapopupyoga.com/ventureaway