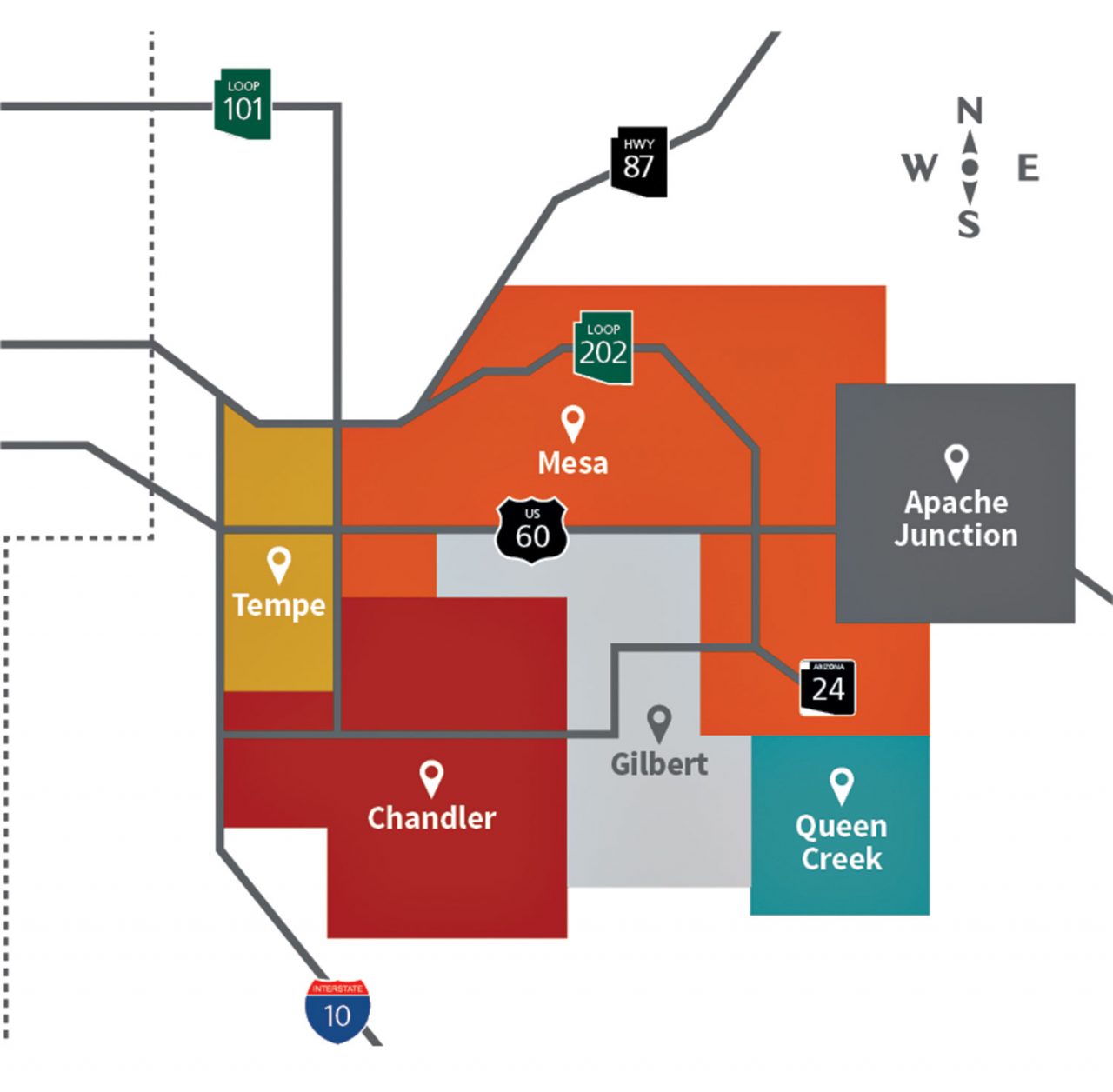 Regional distinction pays off for the East Valley.

In 2014, PHOENIX ran a story on the East Valley’s rebranding effort and brainstormed snarky options for new monikers: Phoenix’s Elbow, Not Scottsdale, Eastbound & Found. The actual final name, PHX East Valley, seemingly did the trick: From January through June 2018, the region – composed of Apache Junction, Chandler, Gilbert, Mesa, Queen Creek and Tempe – added 4,589 jobs, more than half the new jobs in the Phoenix metro area in that timeframe.

Of course, the name was just the cherry on top of a sundae 35 years in the making. In 1983, the East Valley Partnership was formed by a group of business leaders to promote what was, at the time, a collection of sleepy suburbs.

“When we moved to Gilbert, there were around 7,000 people and one stoplight,” says EVP CEO Denny Barney, a sixth-generation Valleyite whose family left Mesa in the 1980s. “Now Gilbert’s the fifth-largest city in the state.”

PHX East Valley was the EVP’s initiative to differentiate itself from the rest of the metro while luring companies in the tech, education, bioscience, health care and aerospace industries.

“The whole idea behind PHX East Valley was to say, ‘Hey, we are part of the Phoenix metropolitan area, but we’re also our own brand,’” says Barney, who serves on the Maricopa County board of supervisors.

The tech boom started with Chandler wooing companies like Intel, Garmin, NXP Semiconductors and Microchip. “They really started to go out and actively recruit along the 101 – kind of the tech corridor.” Despite some big “ones that got away” (Amazon, anyone?), the Silicon Desert is spreading: This summer, Mesa celebrated the opening of an Apple data center. It’s now at work on the Downtown Innovation District with Arizona State University. Gilbert nabbed a $50 million investment from professional services firm Deloitte & Touche that will create 2,500 jobs.

Barney says the EVP will continue to be a “convener” for businesses and cities.  “We’re not the chamber of commerce,” he says. “What we’re trying to do is make sure that they understand what opportunities are there to engage in and be part of the bedrock of the community.”