I’ve always wanted a classic, cinematic summer. In the movies, summer is a Midwestern oasis, a glorious, sunshine-soaked reprieve from harsh, snowy winters and slushy springs. Happy families camp around pine-lined lakes, dive off docks, fish from dinghies and participate in exotically wholesome activities like three-legged races and tug of war in 80-degree weather.

For me, an indoor kid growing up in Arizona, summer has always been a hellish ordeal to be survived. As the child of sun-worshipping water sports enthusiasts, I spent plenty of time on lakes, but they were manmade, full of tepid water and populated by party boats loaded with nearly nude drunkards brandishing koozies of Budweiser. It’s not exactly what Hayley Mills was working with in The Parent Trap.

But this past May, I found my sweet summerly ideal in a weeklong sojourn to Elkhart Lake (elkhartlake.com). The historical resort community in Sheboygan County in eastern Wisconsin – Green Bay is to the north, Milwaukee to the south – has a year-round population of 967 (2,000 in summer), an adorable “downtown” that consists of two streets intersecting and a lake so placid that motorboats are prohibited on Sundays. I had a grand old time exploring a small town where summer is the best season of the year. 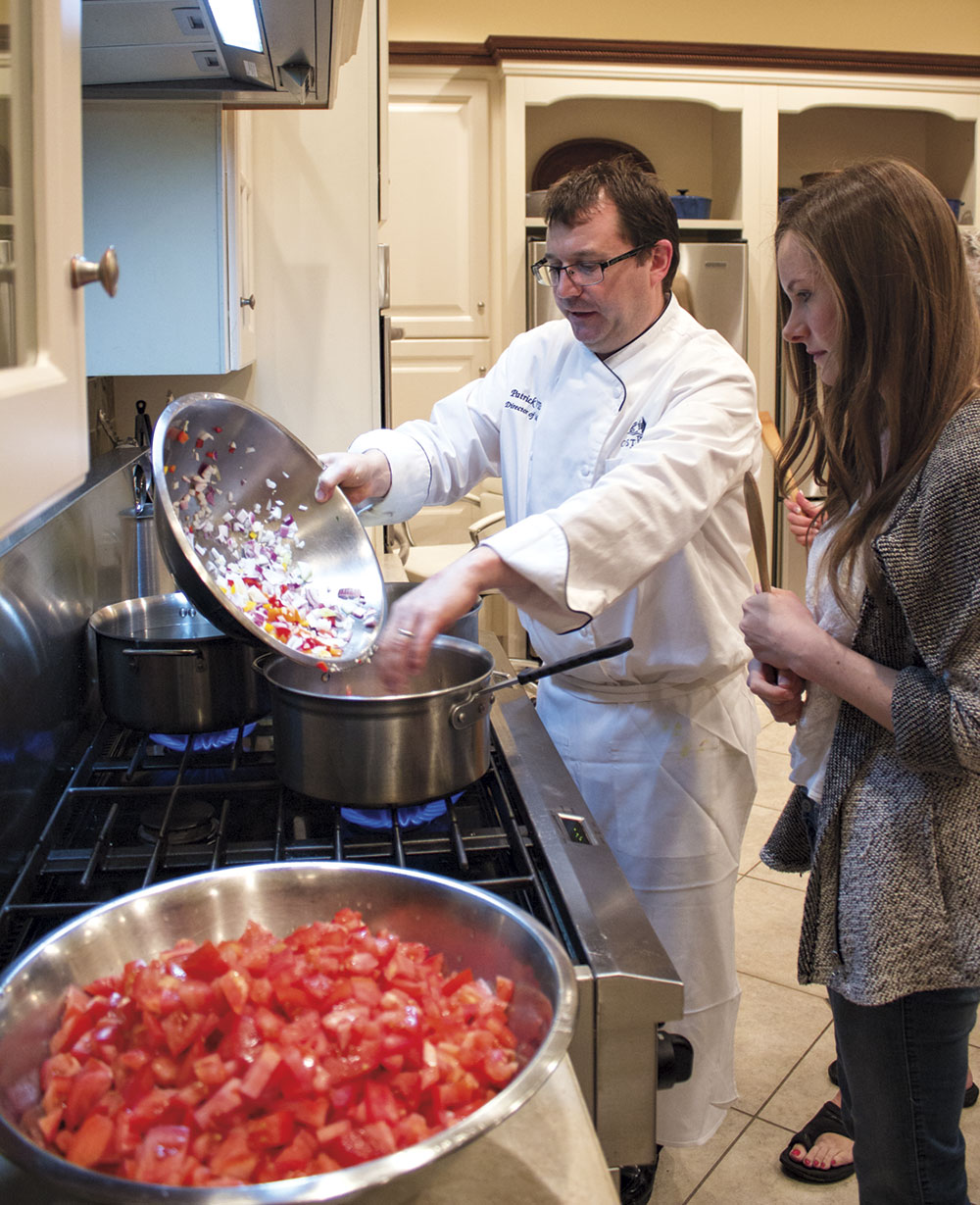 “They had a very picturesque, bucolic feeling to them,” Osthoff general manager Lola Roeh says. “Whole families would come for the summer. They’d come out on the train, steam trunks and all… It was a great way to live. We hope that we bring some of that feeling back, that relaxing kind of throwback to the way vacations used to be.”

Roeh’s grandparents were farmers who supplied The Osthoff with geese, ducks, beef and produce in its early days. Over the last 20 years, she’s shepherded the resort’s food program back to the basics of her forebears. Last year, Osthoff gardens supplied 8,000 pounds of produce for its restaurants, banquet halls and Aspira Spa. Moreover, executive chefs Patrick O’Toole and his wife Ronna O’Toole teach cooking classes at the onsite L’Ecole de la Maison, modeled after a French cooking school. I while away a delicious morning with the O’Tooles, learning how to make shakshuka, chia seed pudding and a jewel-toned quinoa, beet and cabbage salad topped with a buttery halibut fillet browned to a magnificent dark gold. Dark gold is also the color of Siebkens Resort’s signature rye bread, a family recipe passed down through four generations of German-American hoteliers.

The term “resort” may be slightly misleading for Valley dwellers for whom that word evokes the Fairmont Scottsdale Princess or The Phoenician. These resorts have the shabby chic charm of seaside cottages or mountain manses – well-appointed and well-maintained, but not glitzy. Think Baby Houseman’s lodgings in Dirty Dancing, not Kevin McCallister’s Plaza Hotel pad in Home Alone 2: Lost in New York. Victorian Village even hosts weekly musical revues à la the Dirty Dancing finale.

The Great Outdoors
I am predictably awed by the verdant vastness of Wisconsin, with its sloping emerald hills and shamrock-hued fields stretching into forests of cedar, fir, pine, spruce and hemlock trees. Lilac trees line the quaint city streets, and their fresh, sweet perfume mingles with the loamy scent of lake water.

My hike through Ice Age National Scenic Trail (iceagetrail.org) in the Kettle Moraine State Forest has the most intense volume of green I have ever seen in my desert-dwelling life. The only interruptions in the sea of leaves, grass and lichen (which all hover between lime and kelly on the green scale) are the umber tree trunks, branches and soil underfoot. The Kettle Moraine landscape emerged in the last Ice Age, when two glaciers collided and retreated, creating rivulets of earth. The hike is stunning for its naked natural beauty and for its volume of bugs, which feast on my flesh like Green Bay Packers tailgaters inhaling bratwursts, despite my crazed application of insect spray.

The lakeside resorts all offer private beaches along with boating and fishing, from kayak rentals to pontoon tours. You can also access the lake via the public beach at Fireman’s Park (411 S. Lake St., 920-918-6350).

The Local Color
In the early 1950s, Elkhart Lake was an unlikely international hub for road racing thanks to its winding country roads, which still bear signs like “Wacker’s Wend” and “Dicken’s Ditch.” Road America (N7390 State Hwy. 67, Plymouth, 920-892-4576, roadamerica.com), a 640-acre motorsports complex, carries on the tradition with racing events, go-karts, ATVs and driving schools. I successfully complete the Champagne Slalom, an obstacle course with the added challenge of keeping a “Champagne glass,” aka a tennis ball on a pedestal, from slipping off the hood of the car. I have the slowest time of our group (including some septuagenarian ladies), but I don’t care. Safety first. 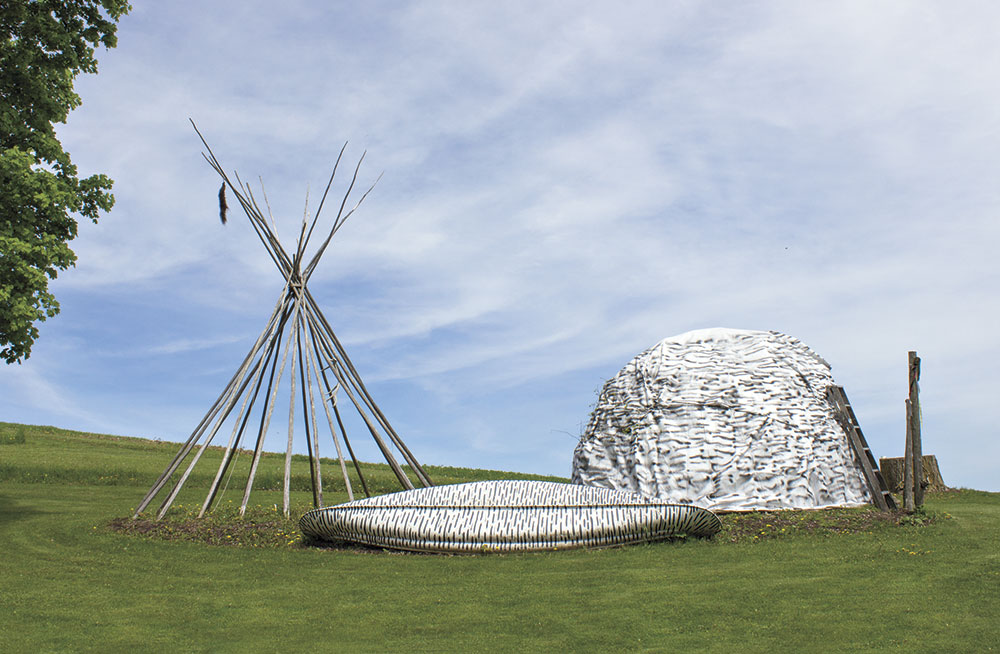 Gears of a different sort are engaged at SwitchGear Brewing (44D Gottfried St., 920-781-5120, switchgearbrewing.com), Elkhart Lake’s first craft brewery. Brewer Nick Kullmann’s beers nod at the community with their names: Pontoon Pounder (American wheat), Resorter Red (red ale) and Lead Foot (Scotch ale) are favorites. I’m not a beer gal, but I succumb to barkeep Sarah’s coaxing and try the Fat Cheeks, a nut brown ale that tastes of root beer and latte. She suggests I pair it with the six pounds of cheese curds I gleefully buy at Henning’s Wisconsin Cheese (20201 Point Creek Rd., Kiel, 920-894-3032, henningscheese.com), a fourth-generation family-owned cheese factory in nearby Kiel. Henning’s uses only milk from pasture-raised cows free of antibiotics. “Happier cows produce more milk, and higher quality,” our guide Katie says. We sample eight types of cheddar, mozzarella, Colby and farmer’s cheese, plus fistfuls of squeaky curds, and watch employees salt curds through a display window. I am in heaven.

I knew I would love Henning’s, but I’m surprised by how much I love Henschel’s Indian Museum (N8661 Holstein Rd., Elkhart Lake, 920-876-3193, henschelsindianmuseumandtroutfarm.com), which Gary Henschel has run from his family farm since 1979. As a boy, Henschel found Native American artifacts while working the land. “I just fell in love with the cultures, and the more you learn, the more you realize you don’t know,” he says. He has helped archaeologists on digs on his property, but always seeks Native permission and participation. Ask him to tell you the story of Rolling Thunder, and to show you the re-creation burial mound he modeled after the real one his grandfather’s horse stumbled into.

The Mess Halls
I don’t eat a bad meal in Wisconsin. These people know good food and love to feed. And it’s not all cheese – good or bad, depending on your point of view. I practically lick the plate of my Brussels sprouts with lemon and fried capers at Lake Street Café (21 Lake St., Elkhart Lake, 920-876-2142, lakestreetcafe.com), which has a wine list longer than most in Phoenix restaurants and consistently wins Wine Spectator awards. Another journalist on the trip is an editor at Food & Wine, and he marvels at the breadth and depth of the offerings and the bargains. “These would cost twice this in New York,” he says. 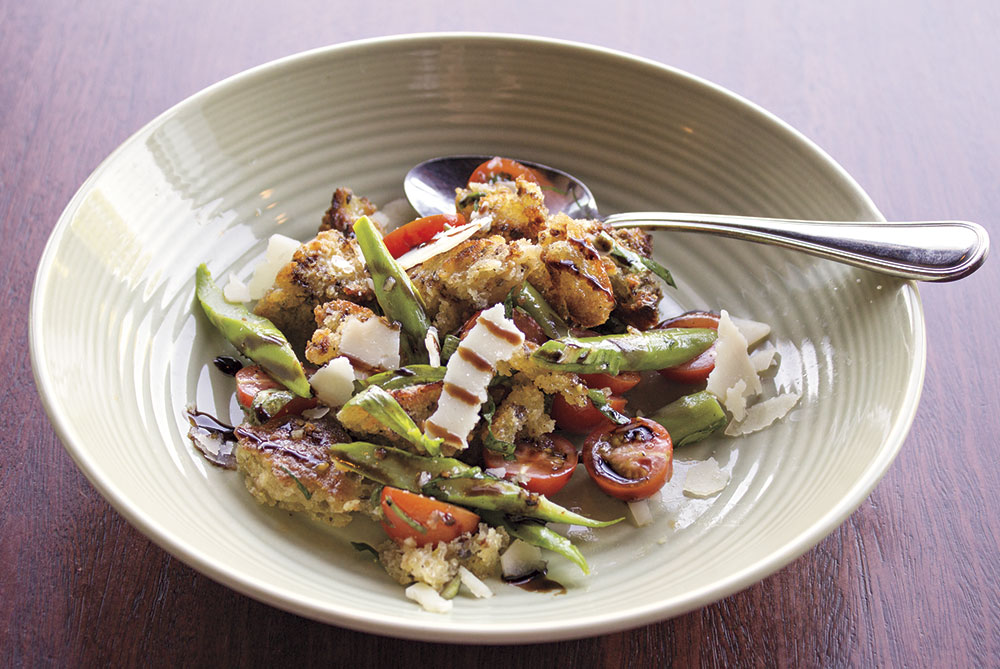 Paddock Club (61 S. Lake St., Elkhart Lake, 920-876-3288, paddockclubelkhartlake.com), run by siblings and named after a Prohibition-era speakeasy, also has great wine and cocktails to accompany its small plates (my favorites: veggie pakoras and panzanella with local asparagus). And Lola’s on the Lake (named for Roeh, lolasonthelake.com) at The Osthoff pairs fine dining with breathtaking views of the lake. Our sunset dinner there is magical and full of produce grown on the property. I lap up creamy asparagus soup before attacking a Wisconsin cheese plate.

My favorite meal of the trip is crispy, golden pork schnitzel on a bed of spaetzle flecked with spinach and bacon, drizzled with a bright lemon-caper sauce at Back Porch Bistro at Victorian Village (vicvill.com). It’s an elevated version of the comfort food the German settlers of this area cooked, passing the dishes on to their descendants who run these lakeside resorts today. For a moment, I feel like part of the Elkhart Lake family. I sip my rosé and look out at the softly rippling waters of the lake. Summer is here, and there’s not a koozie in sight.

Curd is the Word
How is cheese made? And what on earth are curds? Here’s the skinny.

• A starter culture is added to fresh milk. It breaks down the sugars (lactose) into lactic acid. The more acid, the tangier the cheese. 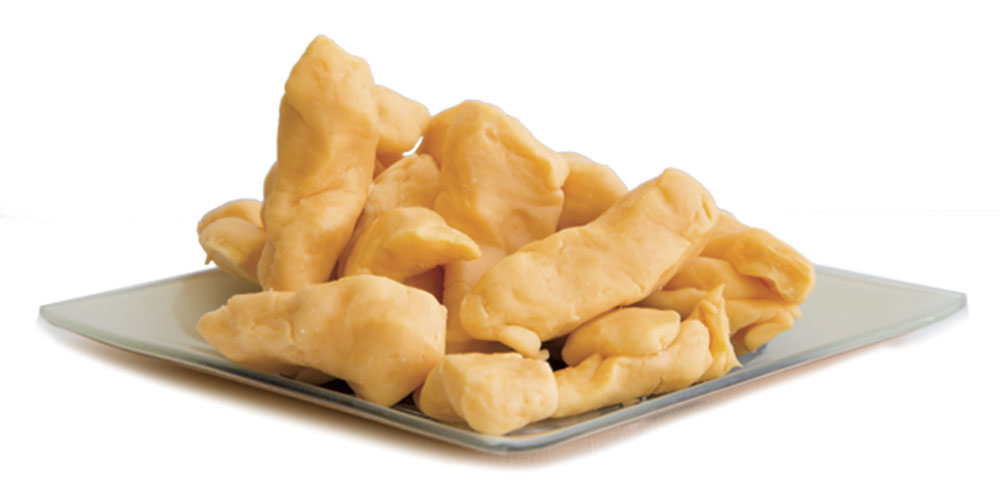 • Annatto (a natural food coloring derived from a South American plant) is added to the fermenting milk. An enzyme called rennet (traditionally harvested from the stomach of a calf; Henning’s uses vegetable-based rennet to satisfy its No. 1 wholesale customer, Whole Foods) is added, which attacks droplets of protein and causes them to drop out of the milk, taking fat with them.

• These droplets of protein and fat form the curd. The remaining liquid is called whey. The curd is repeatedly turned and pressed to expel whey. Blocks of curd are put through a mill, which cuts them into jagged little nuggets, or curds.

• The curds are rinsed with warm water and then salted to inhibit bacterial growth and improve flavor. You can eat the curds at this point, or…

• Put them in a cheese hoop to be pressed into blocks of cheese. All cheese begins as curds. Cheddar curds are the largest, which is why they are the most common. Mozzarella, Colby and farmer’s cheese curds are so small you’d have to eat them with a spoon.