Community college district board meetings are hardly a place one goes to enjoy an IRL soap opera. But this year, the tense exchanges between members of the Maricopa County Community College District governing board and the teachers and faculty from the district’s 10 colleges have been almost popcorn-worthy.

The factions have clashed on everything from scrapping football to purging salary negotiations, with professors often employing their powers of persuasion in colorful, impassioned speeches.

Behind all the drama, however, brews a nervous battle over who gets to participate in the state-defunded district’s ambitious Transformation Plan, a task force-designed blueprint that includes consolidating the management of all of its individually accredited colleges into one large unified “enterprise” – a move that one Phoenix College professor has likened to a “corporate takeover.” Similar solvency-saving plans have been attempted in Vermont, Georgia, New Hampshire and Connecticut, with varying results. In Connecticut, New England’s accreditation body recently rejected its board’s proposal to merge 12 colleges on the grounds that it would risk the schools’ existing accreditations. That plan was also expected to cut 190 jobs.

“We can’t just sit by and let what we’ve seen occur in other states happen here,” says Mike Mitchell, a Paradise Valley Community College teacher and faculty liaison. “This is really a fight for the soul of higher education.”

That fight peaked at the February 27th meeting, where attendance overflowed MCCCD headquarters in Tempe, with late arrivals viewing the proceedings on video screens outside the meeting room. On tap that night: a contentious vote to eliminate the district’s nearly 40-year-old “meet and confer” policy, a process that allowed faculty to meet with the board annually in negotiating salaries and working conditions. 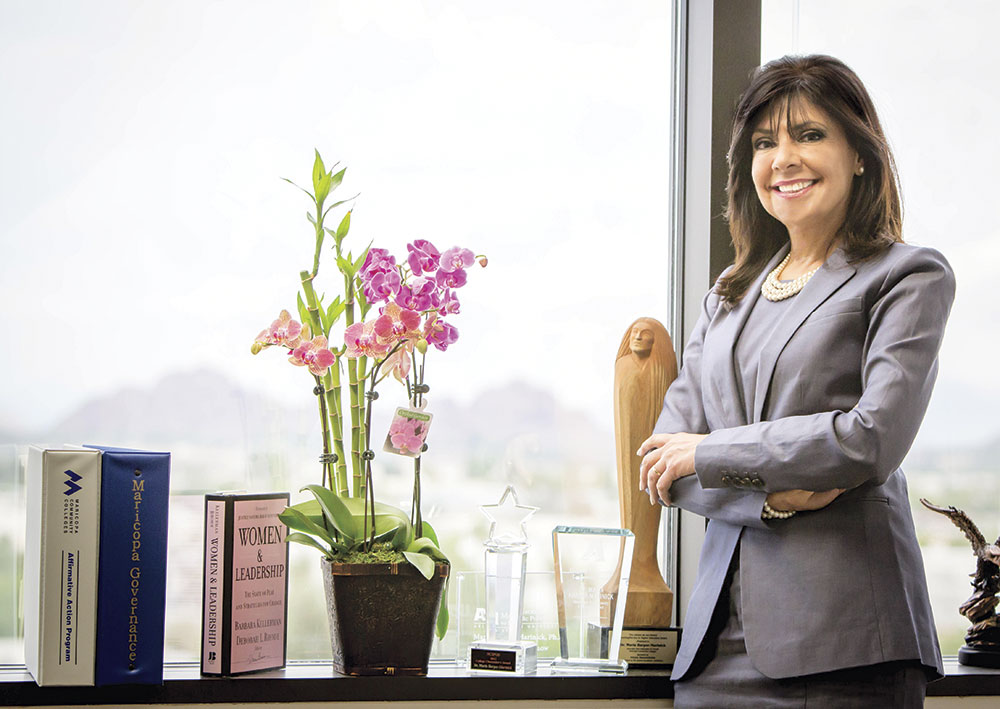 As part of new efforts to “streamline” operations, governing board president (and former Republican member of the Arizona House of Representatives) Laurin Hendrix stated in his proposal that eliminating the collaborative meetings would “allow changes to be accomplished more quickly,” recognizing the board as “the final approval authority for all policy matters.”

One after another, outraged teachers took the mic to protest the blow to shared governance, voicing concerns over losing their seats at the table in decisions that affect them most. Sasha Radisich, an economics teacher at Glendale Community College, likened the elimination of the policy to “tearing the seat belts out of your car,” adding, “No matter how good a driver you are, it will make your passengers nervous.” Felicia Ramirez, a communications teacher at PVCC, compared the faculty’s jitters over what the board could do with their jobs to having “a piano hanging over our heads.”

Nevertheless, the board voted 4-3 to eliminate the policy. Shortly afterward, the Maricopa Community Colleges Faculty Association, a voluntary-membership 501(c)5 labor organization representing about 70 percent of the colleges’ 1,400 full-time faculty members, filed an $850,000 claim against the district, alleging breach of contract (the claim remains in the review process).

The uproar over the policy change was but the latest episode in what appears to be a series of falling-outs between MCCCD administrators and school staff. An earlier decision to cut football at four colleges was met with loud protests by district coaches and student athletes. Last year, a group of non-faculty employees filed a complaint with the governing board alleging covert monitoring of emails by the district’s human resources department. A subsequent investigation by an outside law firm found no evidence of monitoring but did report “very serious departmental issues within the district,” including a general lack of trust between staff and management.

Then in April, the district announced new presidents for four of its colleges – Glendale, Mesa, Chandler-Gilbert and Phoenix. And in May, it announced a search to find a replacement for retiring Scottsdale Community College president Jan Gehler. Could this major housecleaning be linked to the internal squabbling? Or are the changes just necessary growing pains in keeping the colleges stable and vital without state funding?

“Actually, the hiring of new presidents was the result of a selection process that had been underway for some time, and predates the board actions with regard to meet and confer,” says Darcy Renfro, chief of staff to MCCCD chancellor Dr. Maria Harper-Marinick. Further, Renfro says the board is already formulating a collaborative process to replace the long-standing district policy, which she says is being developed with about 25 faculty representatives, including at least two from each college. “The meetings have been very productive, and I think good recommendations will come out of them.”

But Mitchell, a 27-year veteran in the district who stepped down in May as president of the faculty association, isn’t sold. “Faculty morale is decidedly down – there have been a lot of retirements,” he says, citing opposition to the creeping corporate mentality of the governing board as a factor. “The ideology, the values which seem to govern the decision-making, represent drastic departures from the way this institution has operated successfully for the past 40 years. For several people I know, the recent board actions have been their sign that it’s time to get out.”

#MCCCToo
Add to the district’s staffing woes the recent resignation of a college vice president amid sexual harassment allegations and a subsequent investigation into two other executives:

On May 3, the district reported that LeRodrick Terry, vice president of student affairs at Tempe’s Rio Salado College, an MCCCD school, was resigning after an investigative report substantiated several complaints that he touched female employees’ breasts and buttocks and made sexually suggestive comments. Reports of Terry’s inappropriate behavior date back to 2015.

Also on May 3, two senior managers at radio station KJZZ, which is owned and operated by Rio Salado, were put on paid leave after anonymous allegations were brought to the attention of district officials. Details of the allegations against general manager Jim Paluzzi and associate general manager Mark Moran remain confidential while the investigation proceeds. An investigation is now being conducted into “whether college leadership responded appropriately to recent allegations… when they became known,” according to district spokesperson Matt Hasson.