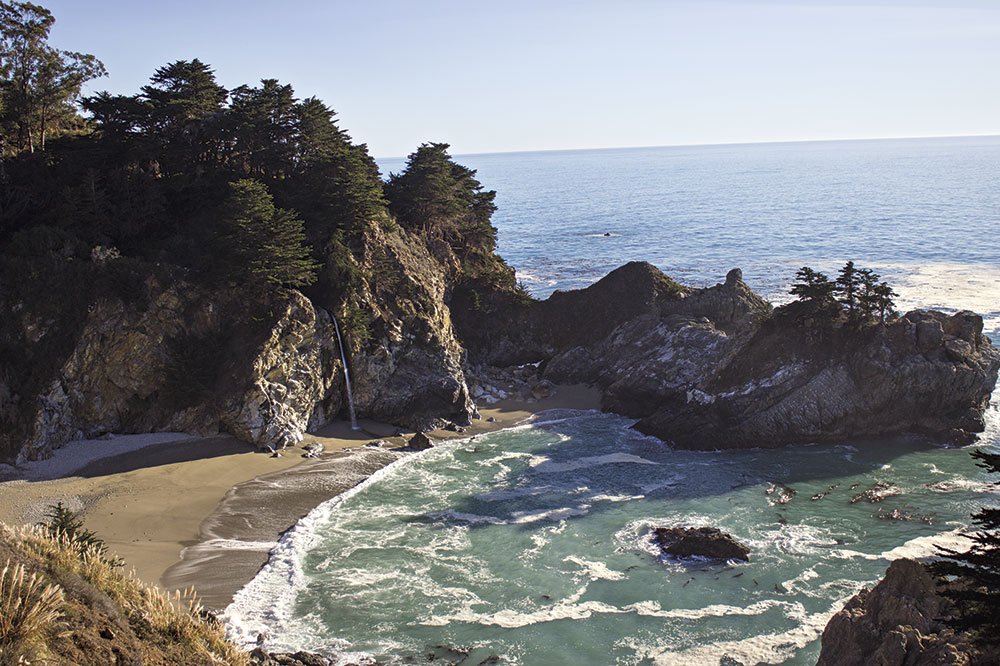 As Jack Kerouac said, go to your desire and laugh – and get the best sleep of your life in a glamping tent – in Big Sur.

“Who can’t sleep like a log in a solitary cabin in the woods, you wake up in the late morning so refreshed and realizing the universe namelessly: the universe is an Angel.” — Jack Kerouac, Big Sur

I think of Jack on my first morning in Big Sur. How could I not? A Beatnik fan-girl who wrote her college thesis on the intersection of Beat literature and the American West, I am perfectly primed to retrace the King of the Beats’ escape to this wonderland of woods and sea on California’s central coast. Except instead of a solitary cabin, it’s a small grouping of A-frame tents in the middle of a redwood grove. And instead of late morning, it’s dawn. But the universe speaks to me all the same: The pink sun is just filtering through the tippy tops of the titanic trees, setting ablaze the pine needle mounds of earth in a ferocious filter of fiery orange.

It’s an astounding sight – something you think only exists in Bob Ross’ happy little paintings or, you know, the mind of a tortured, alcoholic writer staring down his tenuous mortality and ambivalent feelings toward commerical success. I half expect to see that angel Jack yearned to meet, so ethereal is this light. But in its place, I see a white golf cart jostling along up the road and a friendly resort employee bounding up to my tent’s porch to drop off breakfast.

I’m quite certain this is not the scene Jack had in mind when he spiraled into delirium tremens-induced madness, trading in the creature comforts of San Francisco for a harder, more rugged existence in hopes of finding peace on this land where the Santa Lucia Mountains rise jagged and gnarly from the turquoise Pacific. But as I chow down on a farm-fresh egg sandwich, fresh-squeezed juice from locally grown beets and piping hot coffee, listening as the forest comes slowly to life around me, I think Jack might have had it wrong. Who says we can’t have both? In Big Sur at least, ritzy resort-goers and backwoods hippie artists, harshness and beauty have coexisted for a long time. 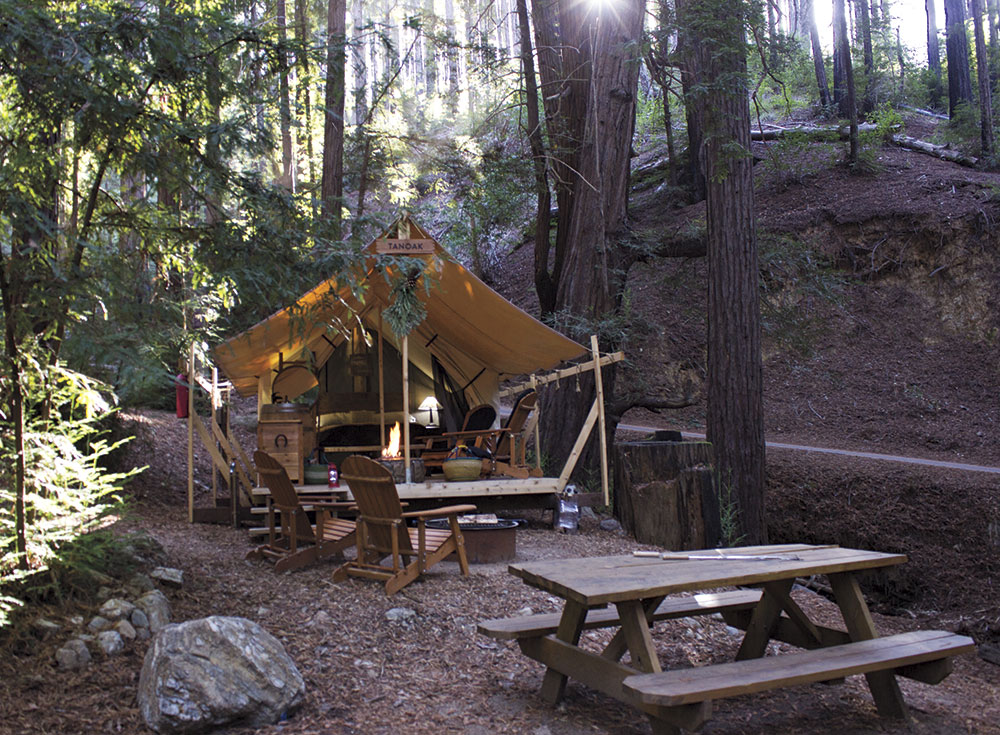 GLAMPING
Carved as it is along precipitous cliffs plunging into swirling churn, the 90-mile stretch of coast called Big Sur (“the big south,” referring to the vast wilderness south of Monterey) is bafflingly beautiful while also perfectly positioned for natural disaster. This unincorporated community of less than a thousand full-time residents has long been subject to forest fires and winter storms, though 2017 was a particularly bad year. Biblical rain over several months triggered landslides in the area, causing a bridge to close in the north and cutting off segments of Highway 1 to the south. (The California Department of Transportation is reportedly on track to rebuild Highway 1 at Mud Creek by late summer.)

The closures along the only road in and out of Big Sur meant many businesses were forced to take a sabbatical, including Ventana Big Sur (48123 Hwy. 1, Big Sur, 831-667-2331, ventanabigsur.com). The adults-only, oh so posh resort used that time to undergo a multimillion-dollar remodel, rebranding under Alila Hotels and Resorts. It reopened in October, debuting new interior design, and community and outdoor areas that better capture the views from its stunning perch overlooking the sea, plus 15 new “glampsites” on its 40-acre campground (children are permitted on the campground; glamping starts at $325 a night, ventanabigsur.com/glamping).

“You immediately become immersed in nature being surrounded by the hilltops of rolling meadows and towering redwood trees, all while enjoying all the amenities and services of a world-class resort,” says Ventana general manager Kristina Jetton, extolling the virtues of glamping. Not much of a camper, but wanting to seem cool and crunchy, I rejoice at that notion. My tent is outfitted with a king-size bed topped by a heated blanket that’s so insanely comfortable that I – a well-known insomniac – get some of the best sleep of my life. The porch houses a sink with running hot water, cooler for snacks, hickory walking sticks, padded Adirondack chairs and an automatic gas fire pit. Nightly turndown service is provided in addition to a complimentary s’mores kit, hot cocoa or tea, and cooking utensils.

The communal bathhouse features showers with heated teak floors and fluffy towels, while large hammocks and cornhole games are scattered about the grounds. Room service comes in colorful woven picnic baskets and is delivered by a friendly campground attendant. For an additional resort fee of $100, glampers can get access to the spa, pools, social area and fitness center at the main resort, a hilly march or quick drive up the road. 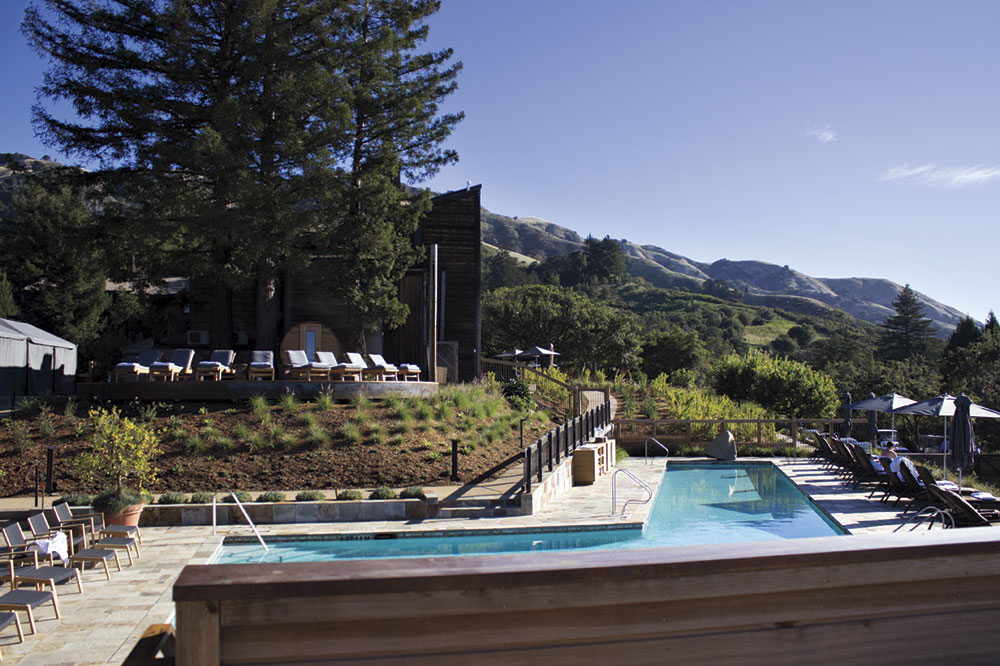 HIKING
While on a hike in Northern California, Kerouac’s protagonist in The Dharma Bums muses, “I felt like lying down by the side of the trail and remembering it all. The woods do that to you, they always look familiar, long lost, like the face of a long-dead relative, like an old dream, like a piece of forgotten song drifting across the water…” Fitting for Big Sur, which seems at once recognizable – likely from all the social media posts from weekenders who cram into the scary-short highway turnoffs to take selfies above the azure ocean, or on Bixby Bridge as seen in the opening of HBO’s Pretty Little Lies – and strange.

Though much of the interior forest remains wild – the area was known as one of the country’s last true, wild frontiers as the highway wasn’t built until 1937 – the areas closest to the coast are open to exploration. On your way in, plan a sojourn into Point Lobos State Natural Reserve (Hwy. 1, 3 miles south of Carmel-by-the-Sea, pointlobos.org, $10 per vehicle), often called the crown jewel of California’s state parks due to its coves of mirrorlike water reflecting the yellow flower-dusted, grassy cliffs and plump seals sunning themselves on white sand.

To the south is Julia Pfeiffer Burns State Park, named for the tough-as-nails rancher daughter of the first permanent settlers who came to Big Sur in 1869. While many trails remain closed due to damage from the 2017 landslides, the McWay Falls trail (the trailhead is 9.3 miles south of Ventana Big Sur on Hwy. 1) is open and wheelchair-accessible. Park in the official lot for $10 or be a renegade like me and park for free on the side of the road – just beware passing motorists.

The quarter-mile sand path takes you along a sea cliff overlooking McWay Cove, where you’ll see an 80-foot waterfall falling onto a pristine beach created by, yes, another landslide in the ’80s. It ends at an observation deck – once the site of the home of former New York Congressman (and college roommate of FDR) Lathrop Brown and his wife, Helen Hooper Brown, who donated the property and nearly 2,000 acres of land to the state to be named for Helen’s friend Julia in 1961.

Try to time your visit to Pfeiffer Beach (turn west off CA-1 onto Sycamore Canyon Road, $10 parking) to coincide with sunset. Driving down the windy road to the beach, I see old farmhouses and horses grazing behind rustic beach wood fences in the hazy dusk light. It’s almost too beautiful, I think. Walking down to the beach, beyond the conglomeration of pro and hobby photographers attempting to capture golden hour through the arched rock just off shore, I amble about the tide pools and marvel at life in its smallest forms – sea anemones and tiny hermit crabs – and feel grounded. 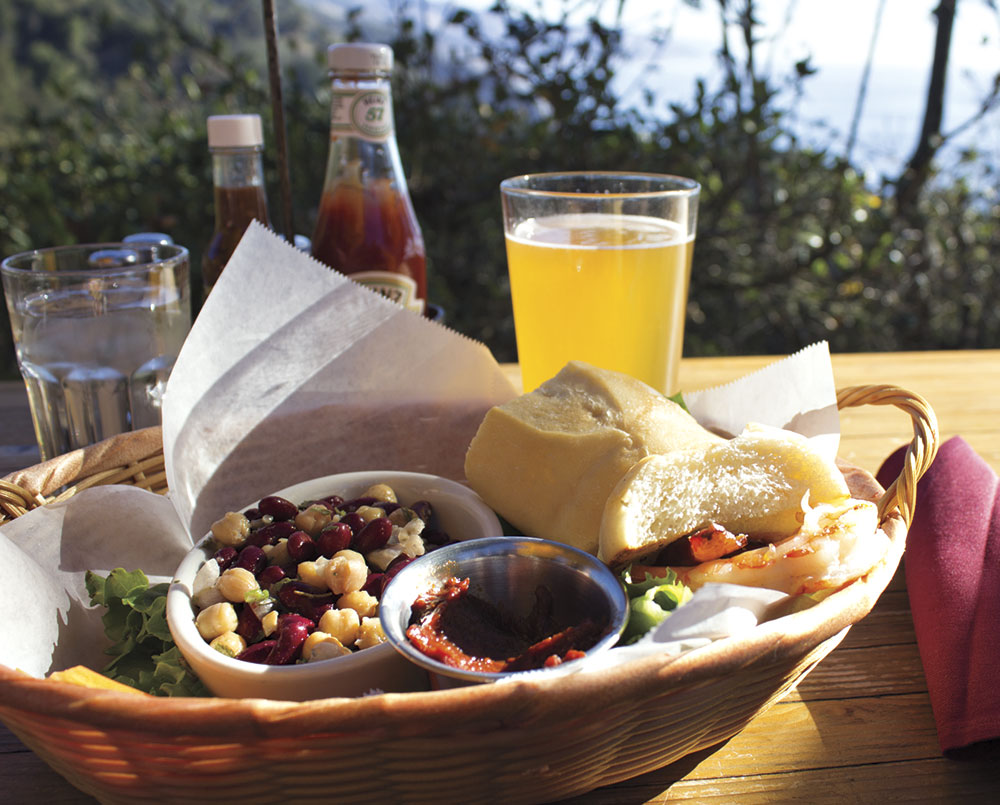 EATING
To tap back into the fancy side of Big Sur, head up the hill to Ventana Big Sur’s on-site restaurant, The Sur House (ventanabigsur.com/dining/the-sur-house), helmed by Executive Chef Paul Corsentino, a former big-time NYC guy who, like many before him, came to Big Sur to escape big-city hubbub and relish the perpetual sunshine. Corsentino’s menu is constantly in flux, shaped by what he can get from local fishermen, free-range farmers and whatever produce is in season. For dinner, the chef’s tasting menu ($90) includes four courses and might include meltingly tender baby heirloom beets in a sunflower pesto, egg in a hole with crispy phyllo and nutty sunchokes, Moroccan spiced duck breast and an apple cheesecake cleverly shaped like a glistening Granny Smith topped with caramel popcorn.

The next day, get back to basics with a fluffy veggie frittata, big-as-your-face cherry scone and foamy cappuccino at Big Sur Bakery (47540 Hwy. 1, Big Sur, 831-667-0520, bigsurbakery.com), housed in a cheery old bungalow built in 1936. Take your plate outside to the wraparound porch or side patio hemmed in by massive trees and a succulent garden.

Lunch is best at Nepenthe (48510 Hwy. 1, Big Sur, 831-667-2345, nepenthe.com), which might boast the best views of Big Sur on its sprawling, panoramic patio. The restaurant was designed by Frank Lloyd Wright protégé Rowan Maiden in the late ’40s to seamlessly blend into its physical and cultural environs and became a mecca for the artists, writers and musicians who flocked to the area, including Joan Baez and Henry Miller. It’s so staggeringly gorgeous, I wouldn’t fault the place for making food an afterthought, but my broiled shrimp BLT and hoppy local beer are quite tasty indeed.

For dinner, I take a cue from my man Jack and head back to the woods. In Big Sur, he writes, “Life is a gate, a way, a path to Paradise anyway, why not live for fun and joy and love or some sort of girl by a fireside, why not go to your desire and laugh.” I grab taco supplies and a bottle of crisp white wine from the burrito bar at the general store at Big Sur River Inn (46800 Hwy. 1, Big Sur, 831-667-2700, bigsurriverinn.com) on my way back to my glampsite. I heat my juicy shredded chicken, well-seasoned beans and fresh corn tortillas over the little fire pit, and I am living for these tacos. The forest is dark, the crickets are humming and I’m that girl by a fireside, loving and laughing in paradise.

POP UP BIG SUR
Jack Kerouac wasn’t the only artist enraptured by this hard-to-access, magical yet tempestuous place. A look at Big Sur in pop culture:

“Certainly paradise, whatever, wherever it be, contains flaws. (Paradisical flaws, if you like.) If it did not, it would be incapable of drawing the hearts of men or angels.” – Henry Miller, Big Sur and the Oranges of Hieronymus Bosch

“This is the way life goes in Big Sur. Waiting for the mail, watching the sea lions in the surf…and, most of the time, working at whatever it is that you came here to work on, whether it be painting, writing, gardening or the simple art of living your own life.” – Hunter S. Thompson, Proud Highway: Saga of a Desperate Southern Gentleman, 1955-1967

“Have you ever been to a festival, the Big Sur congregation? / Where Country Joe will do his show / And he’d sing about liberty / And the people there in the open air, one big family / Yeah the people there love to sing and share / Their newfound liberty” – The Beach Boys, “California Saga: California,” Holland