Speed Stumping
Can women really have it all? First, didn’t we agree to never ask that question again? Second, sure they can – and all within a tidy six-week time frame, no less. In late January, Phoenix branding and political consulting agency Javelina (the peeps behind Phoenix Mayor Greg Stanton and the Prop 206 minimum wage raise) launched a six-week online course to teach first-timers how to run for office. The course – called If Not Now – costs $249 and comprises online modules like building a campaign team, fundraising and voter contact. Javelina CEO Catherine Alonzo says her firm was spurred by the 2016 elections to make running for office more accessible to a wider variety of candidates – “women, people of color, younger people” – following a national pattern (500-plus women are running for major office in 2018, per the Center for American Women and Politics). But doing so is a big undertaking, especially for those who aren’t connected or can’t hire expensive consulting firms. “We need real people to run for office, and this tool is designed to be extremely flexible and accessible to them,” she says. As for the extremely optimistic time frame of six weeks, Alonzo says the course is not meant to teach “all the ropes” but rather introduce them to tools they didn’t even know they needed to run for the first time. javelina.co/if-not-now
— Lauren Loftus 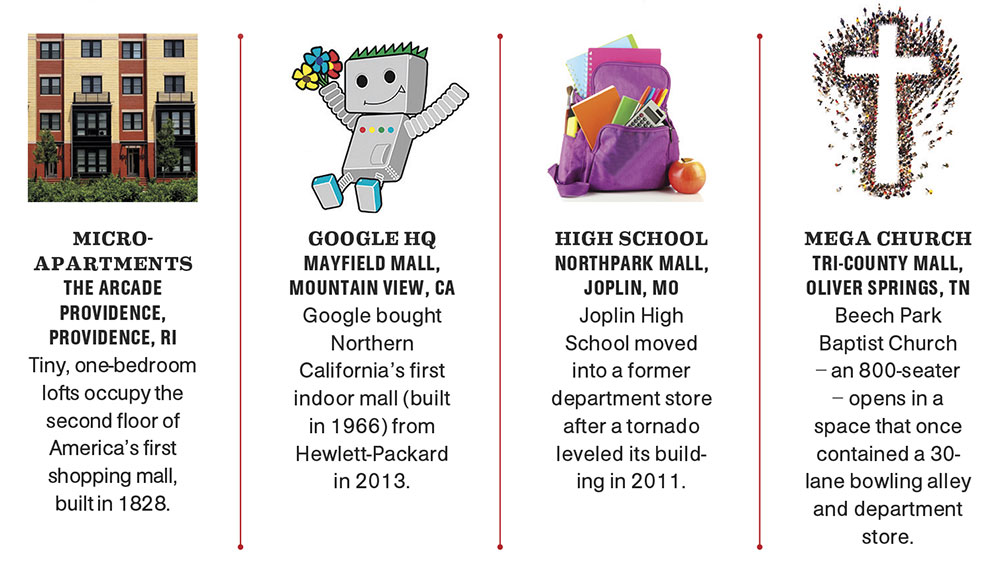 Mall Obit
In late January, surrounded by the dozen retirees who used its 1 million square feet as their speed-walking track, Fiesta Mall in Mesa officially passed away. The fatal blow: the closing of Sears department store, an anchor tenant since Fiesta’s debut in 1979, capping a decade of high-profile departures, including (RIP!) Cinnabon and Orange Julius. The mall will keep one door open so customers can access the four remaining stores until Fiesta completes its conversion into a medical and higher education facility. Fiesta follows in the steps of other repurposed malls around the country. 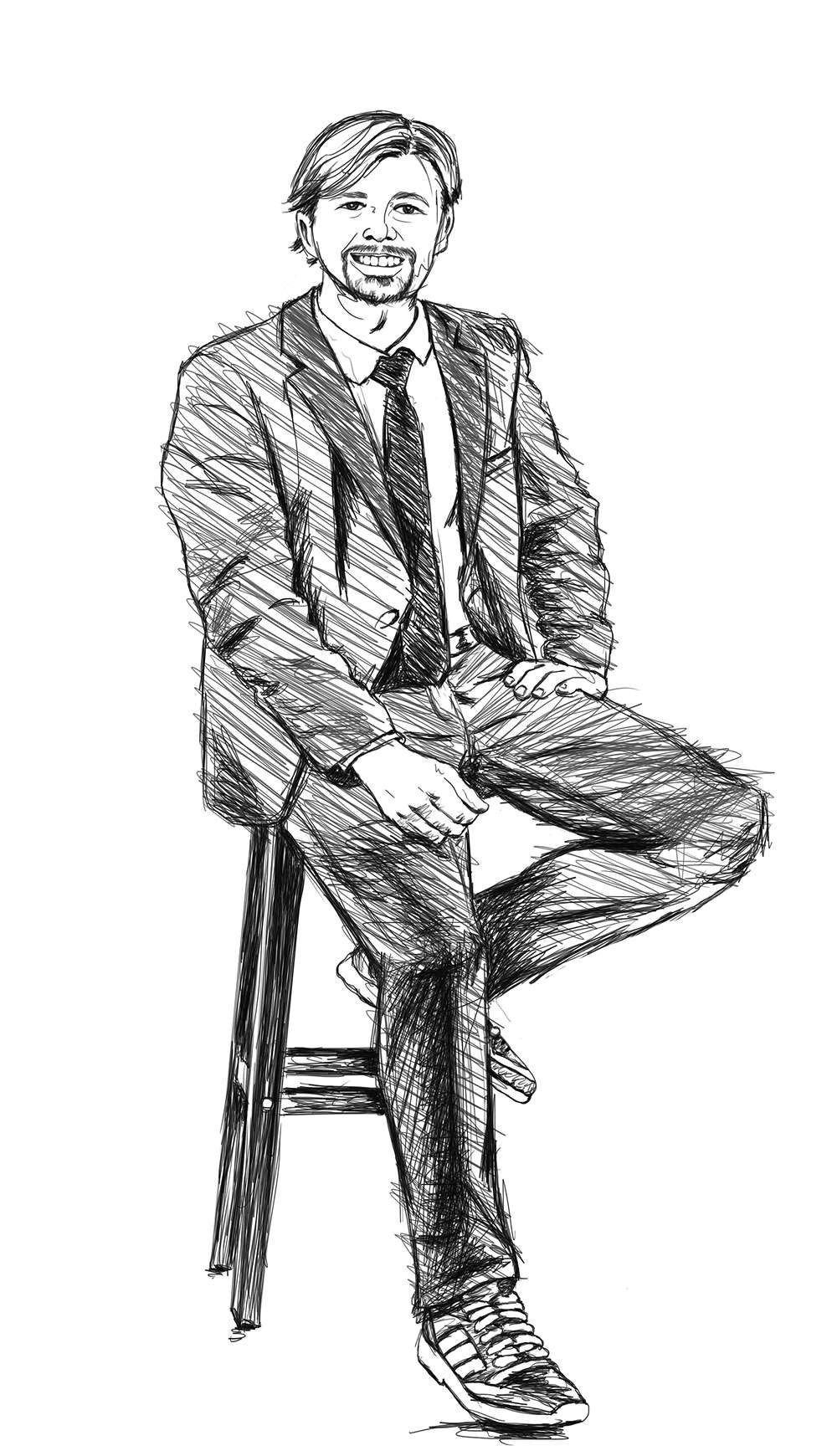 Contrary to common perception, The Arizona Republic movie critic Bill Goodykoontz does not hold the most hated job in journalism. He knows this for a fact, because he held that job, too. “I get a lot of hate mail, but no one gets as mad as they did when I wrote a smart-ass sports column,” the Virginia native says. “I liked making fun of the Buffalo Bills when they were losing all those Super Bowls… so I got an earful from their fans.” Currently celebrating his 10-year anniversary as the Republic’s movie critic, Goodykoontz has plenty of funny stories about wounded, indignant movie fans – including one involving his own editor, see below – but just as many with an edifying ending, particularly this time of year, when a still movie-crazy nation turns its eyes to the Oscars (March 4).

Did you start out in newspapers intending to be a critic?
“I didn’t start off wanting to be a critic… I just wanted a job. I was a night cop reporter for a couple years. And I was always scheming to get off that beat, but let me tell you: There’s not a more exciting job in journalism. Then, out of the blue, they asked me to write a sports TV column, and [later] to be the TV critic [for the Republic]. And it was a natural progression to review movies after that.”

Here’s a movie nerd question: Say you’re sitting at home, flipping through TV channels. What’s the one movie that you have to stop and watch, every time?
“The cliché answer – but it’s true – are the first two Godfather movies. Once, my kids had commandeered the TV… but I made them watch. That’s just good parenting. Less obviously, I love horror and think Halloween and The Shining are great.”

Have you ever wished you could have a “do-over”? Which is to say, revised your opinion of a movie after writing a review?
“Oh, sure. We grade on a five-star system at the Republic, and I’m really careful about what I give five stars to. One of the first movies I reviewed was Michael Clayton, and I really loved it. But I gave it four and a half [stars], because I wanted to be careful about the ‘first one.’ Know what I mean? But I wish I’d given five stars to it. More often, it’s more the matter that I overpraised something. I gave Wreck-It Ralph five stars, and the editor of the paper hunted me down and told me how much she hated it, and her kids hated it. That definitely goes into the over-praise category.”

What was your first five-star movie?
Probably There Will Be Blood, which came out the same year [as Michael Clayton].

The Oscars have always been infused with politics, but the last few years especially, and with racial politics specifically. Do you think politics have impacted who wins or is nominated?
“I’ve got to think they have. They’ve worked to have more inclusion in the Academy [of Motion Picture Arts and Sciences] after #OscarsSoWhite. But when people ask me about [Lady Bird director] Greta Gerwig or [Get Out director] Jordan Peele getting nominated, and just chalking it up to white liberalism and a handout, I would say that’s obviously not true for anyone that saw [those movies].”

Pretend you’re a sports betting guru. Can you give me three stone-cold locks for Oscar night?
• Frances McDormand for Best Actress (Three Billboards Outside Ebbing, Missouri). “But Saoirse Ronan is who I’d vote for, for Lady Bird.”
• Allison Janney for Best Supporting Actress (I, Tonya). “I don’t want to sound like a Lady Bird freak or anything, but my personal pick would be Laurie Metcalf.”
• The Shape of Water for Best Picture. “Not sure if I’d call it a lock… but it has the most nominations, and it’s one of these movies that’s a love letter to movies, like The Artist. It’s why movies about newspapers get good reviews.”

Do you think critics can steer Oscar voters?
“Maybe. There are people whose full-time job is to write about the Oscars, all year long, and it’s almost like the self-fulfilling political stories you read… you write that it’s a front-runner and it becomes a front-runner. To be honest, I’m not sure [all Oscar voters] are watching the movies. I think some of them just vote [reflexively]. That’s why ER kept winning Emmys, after it wasn’t very good anymore.”

The Arizona State Legislature is in session. Dominating the agenda: education, race and the usual assortment of nuts. With compliments to Sergio Leone, we rate the good, the bad and the ugly.

The Good
HB 2018: Introduced by Rep. Reginald Bolding (D-Phoenix), this House bill would prevent schools from suspending or expelling students in pre-K through second grade, unless they present an imminent danger to staff members or other students. We never understood the logic of ever suspending students who are not dangerous or disruptive. Detention, extra assignments, work details or other sanctions – all reasonable. Sometimes punishments are necessary. But a suspension that most kids will experience as additional vacation? This makes no sense. Bolding has a good idea. How about we extend it to all students?
SB 1036: Democratic Sen. Martín Quezada’s bill would ban “lunch shaming.” If it passes, Arizona schools would be prohibited from shaming students who owe lunch money by serving them alternative meals or forcing them to work for their lunch money. Kids can be cruel to one another. They do not need this additional invitation to do so.

The Bad
HB 2499: One can empathize with Rep. Eric Descheenie, the Chinle lawmaker who sponsored this bill, which would prohibit University of Phoenix Stadium or “any other publicly funded sports facility in Arizona” from broadcasting the Washington Redskins’ name when the team comes into town, or displaying the name in any such venue. Admittedly, the “Redskins” seems like a relic from a different time, and not a better one. But that’s a PR cross for the NFL and Redskins owner Dan Snyder to bear. Aggressive censorship of this magnitude is always a slippery slope, and usually impracticable. Would it apply to schools, as well? Would a child be sent home for bringing a Redskins Trapper Keeper to class? We already have plenty of distortion and manipulation of our data-streams without having to submit to the earmuffs routine on football Sunday. (Post-script: Do they even make Trapper Keepers anymore? Maybe we’re relics, too.)
HB 2011: Definitely among the top five, ahem, “head-scratching” bills of 2018, this Goldwater Institute-backed legislation would eliminate current state regulations that require blow-dry-bar operators to carry a cosmetology license, which demand around 1,000 hours of on-the-job training. Sounds reasonable, right? After all, we shampoo and blow-dry our kids’ hair, and have managed not to maim them. And we’re definitely down with deregulation when the shoe fits. What we’re not down with: lice. So sorry, all-powerful blow-dry lobby. Rinse and repeat.

The Ugly
HB 2277: From pandering, Stars-and-Stripes-tie-wearing wingnut Rep. Bob
Thorpe (R-Flagstaff) comes this legislative straw-man argument, which seeks to designate “American free-market capitalism” as the state’s official economic system. Because, you know, socialists. Wethinks Thorpe has been spending too many of his off-hours loitering at the NAU quad, eavesdropping on undergrad social studies encounter groups, because it’s unclear why or where he’d get the idea anyone cares about socialism. Even Bernie Sanders has a 401(k), and even Jamie Dimon visits the public park. Moving on.
HB 2007: We like Jay Lawrence (R-Scotts-dale). Very endearing personality on KTAR once upon a time. But if there’s a weirder legislative sensibility in the capital today, we’ll eat his hairpiece. His latest jam: this legislative nightmare of a bill that attempts to ban people from wearing masks in public. We concede that Antifa are generally goobers, but what? Lawrence wants to make it illegal to wear masks or costumes to protests or any public event. Oh, sure, there are exceptions, like if such garb is “for a business-related purpose” or worn when it “may generally be viewed as part of acceptable attire,” but who gets to decide that? So Handmaid’s Tale, Jay. 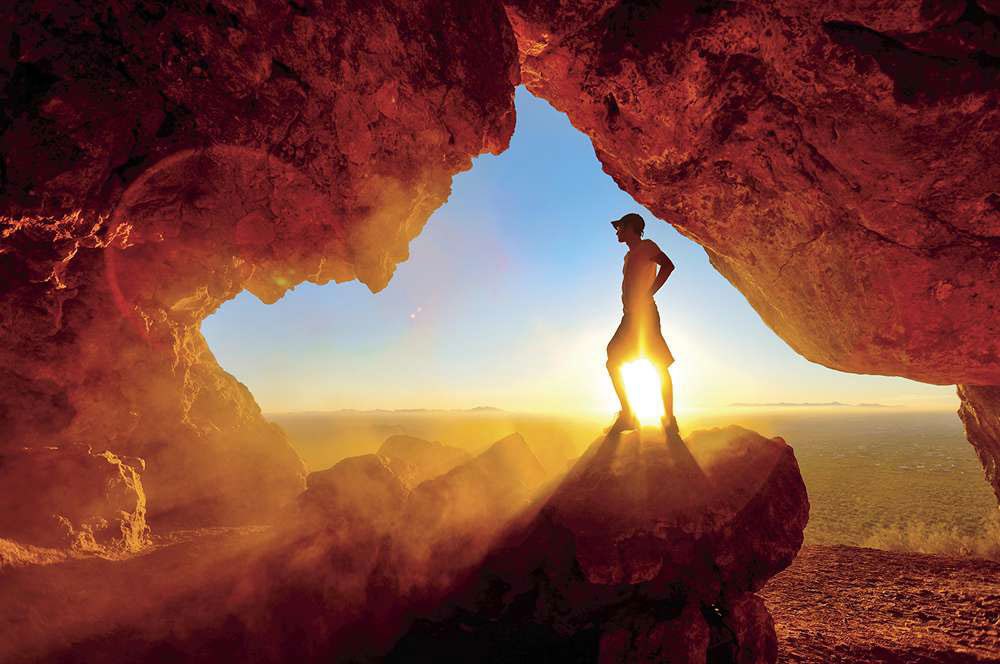 “Last December, I hiked to a little known [feature] in the Superstition Mountains called the Broadway Cave, its name taken from the location of the trailhead located on Broadway Avenue in Apache Junction. While the hike is relatively short and easy, it’s off the beaten path, so it doesn’t see a lot of traffic. The views are fantastic, especially at sunset, as this shot illustrates so well. I had my nephew pose for me since the human element always helps give scale to any natural setting.”