Code Breaker
In the 2002 major motion picture Windtalkers, a buff Nicolas Cage is charged with protecting “the code” – i.e. a Navajo soldier recruited by the U.S. Marines in World War II who used his native tongue as a secret code to help thwart Japanese forces. So, you know, basically another white-guy-saves-the-day flick. At least they got a real Navajo to play the role of Code Talker Private Ben Yahzee… er, we mean a native of Dog Creek First Nation in Canada. “Windtalkers to me was good for an action film, [but] the title and marketing of the film misled a lot of people,” says filmmaker Kody Dayish, a Navajo from Shiprock, New Mexico, who is shooting his own movie on the Code Talkers this year. “Our film, Unbroken Code, will star a real Navajo actor as the main character along with many other Navajos in supporting roles… [and] be spoken 100 percent in the Diné language.” Dayish, who runs a production company with his siblings, says the plot will focus on the young Navajos who decided to leave the reservation to join the Marines and their conflict over leaving their families and way of life behind. Auditions were held in Window Rock, Arizona, in late December, though Dayish says he’s still accepting submissions online through kodydayish.com. 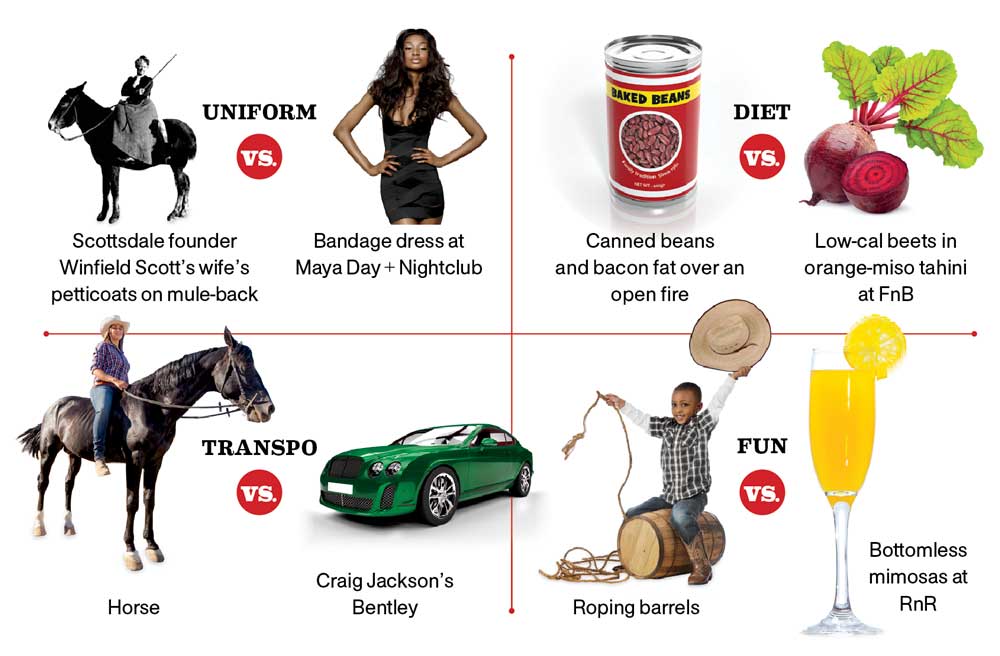 Desert Cheek
February 10, 2018, is the 65th annual Parada Del Sol parade in Scottsdale, with a week’s worth of events leading up to the Trail’s End Festival, in which the West’s Most Western Town celebrates its cowboy roots. Of course, the cowpokes of today who frequent Old Town Scottsdale – called the desert version of Miami’s South Beach by The New York Times – look a little different from their historical counterpoints.

7 QUESTIONS
Cristie Kerr
Superstar golfer Cristie Kerr has a nose for the cup. Turns out, she also has a nose for a nice glass of Pinot Gris. Two years ago, the full-time Valley resident launched Kerr Cellars, a high-end winery in California’s Napa Valley, and passed her Level 1 exam with the Court of Master Sommeliers shortly thereafter. “I’m really serious about wine,” the Miami native admits.

Fortunately, Kerr has plenty to toast of late. With two LPGA tour wins, 2017 was the 40-year-old’s best year competitively since 2011, pushing her career earnings above $19 million – the most all-time for a female U.S. golfer. Her secret? Longevity (she started golfing professionally as an 18-year-old prodigy in 1996) and a famously locked-in putting game.

This spring, Kerr – who lives in Scottsdale with husband Erik Stevens and their 4-year-old son – will try to continue her winning ways at the Founders Cup (March 13-18) held at the JW Marriott Phoenix Desert Ridge Resort and Spa.

1. Kerr went straight to the pros, as it were, out of high school. If she had gone to college, what might she have studied?
“That’s a really hard question. I don’t know if it would have been college or culinary school. I might have pursued a winemaking degree or become a sommelier. Those are things that have always interested me.”

2. Known as one of the game’s great putters, Kerr employs a checklist, or “process,” as she lines up her shot.
1. “Read it from every angle. Be artistic and see the lines.”
2. “Make the practice swings.”
3. “Walk in and execute. Relish the moment. Don’t think about it missing, and give it the best chance to go in the hole.”

3. In 2005, Kerr appeared on an episode of The Apprentice with a pre-presidential Donald Trump, and her wine is carried in some of his resorts. Did she get a job offer to join the administration?
“No, but I got invited to the inauguration. But we had moved, so I didn’t get the invite until six months later. I did get to know him, stayed at Mar-a-Lago, and he’s a no BS kind of guy. I know some people hate him, but he’s done right by the LPGA.”

4. The daughter of diabetics, Kerr lost 50 pounds between 1999 and 2002, both to improve her game and her long-term health outlook.
Her method:
“I went to a nutritionist and trainer, and wrote down everything I ate for six years. For six years, I didn’t have a french fry. But I did put [some of the weight] back on after having kids. Sometimes it’s just easier to eat what they’re eating, you know? And I need to watch the wine.”

5. Does she historically do well at the Founders Cup?
“I’ve finished third or fourth, Top 10 a few times. [The Wildfire Golf Club] is kind of a resort course. The front nine is tighter off the tee – more challenging. The back nine is a resort course, which means it’s easier and wider.”

6. Kerr’s favorite golf movies are the ones you might expect: Tin Cup, Caddyshack and The Legend of Bagger Vance. But her favorite golf books are less well-known.
• Golf in the Kingdom by Michael Murphy. “Live life like you live golf is the main take-away.”
• A Good Walk Spoiled: Days and Nights on the PGA Tour by John Feinstein. “Great insider stuff.”
• The Match: The Day the Game of Golf Changed by Mark Frost. True story of Byron Nelson and Ben Hogan squaring off against a pair of amateurs.

7. Is Kerr a fan of using golf metaphors to describe wine, à la “this Cabernet really leaps off the tee”?
“No, I wouldn’t do that. But you go right ahead.”

In Arizona, Congressman Trent Franks, state legislator Don Shooter and rumors of others to come.

The list of public figures accused of sexual harassment or worse is large and continues to grow.

And the problem does not appear to be limited to Hollywood, Washington or the news media. Credible stories of rape in the military, including in our service academies, have been the subject of Congressional hearings. In corporate America, the playbook seems pretty straightforward: Pay whatever is necessary to avoid bad public relations. And across all industries, at every level, women reporting abuse have described running into a cover-up culture, or one in which they aren’t believed.

The Weinstein matter seems to have burst the dam of silence – each day seems to bring new accusations, many relating to incidents occurring years ago. The common theme seems to be that the alleged perpetrators held great power over their victims. Given the multiple accusations in many cases, it’s impossible not to conclude that the problem is widespread and that historically the victims felt powerless to report misbehavior.

“Will anyone believe me?” many victims once worried. Less so now.

Yet there are a few unsettling notes in the chorus of voices that has risen to defend the victims. U.S. Senator Kirsten Gillibrand (D-New York) was an early and effective voice on this subject, especially with respect to sexual abuse problems within the military. But when asked about the accusations against her colleague Franken, she said, “I think when we start having to talk about the differences between sexual
assault and sexual harassment and unwanted groping, you are having the wrong conversation.” Really? Unlike every other form of wrongdoing, severity and context don’t matter? If I punch you in the face, that is a bad thing. If I shoot you in the face, it is much, much worse. Both bad, but of radically different severity.

Actor Matt Damon, in a much-reviled interview with ABC, made much the same point. After noting that all unsolicited sexual behavior – ranging from the merely crude and crass to the criminal – is wrong and all should be “confronted and eradicated,” he said we should make a distinction between crimes like rape and child molestation versus, for example, patting someone on the rear. “Shameful and gross,” he stipulated, but one is criminal, the other inappropriate and boorish. Different.

Damon made a second notable point: “The clear signal to men is to deny it because if you take responsibility for what you did, your life is going to get ruined. But if you deny it, you can be in the White House, you can be the president.”

For this, Damon was attacked by actresses Alyssa Milano and Good Will Hunting co-star Minnie Driver. The latter wrote: “Gosh it’s so interesting (profoundly unsurprising) how men with all these opinions about women’s differentiation between sexual misconduct, assault and rape reveal themselves to be utterly tone deaf and as a result, systemically part of the problem.”

Here’s the casualty of such a position: the possibility of a genuine discussion. If anyone who attempts to make a nuanced point is going to be characterized as “part of the problem,” no one will join in. Whether or not Damon was off base, lumping him in with the Weinsteins and O’Reillys of the world – the actual villains – only serves to stifle dialogue.

Some of the women who criticized Damon said as much: “It’s not your job to compartmentalize or judge what is worse and what is not. Let women do the speaking up right now. The time right now is for men just to listen and not have an opinion about it for once,” one Twitter user opined.

There’s pain out there. And anger. So it probably is the time for women to speak and men to listen. But as to a real discussion between the two, it looks like that will have to wait.

Mike O’Neil is a sociologist and pollster who hosts the public affairs program The Think Tank on KTAR-FM 92.3. Most of his recent articles are available at mikeoneil.org. 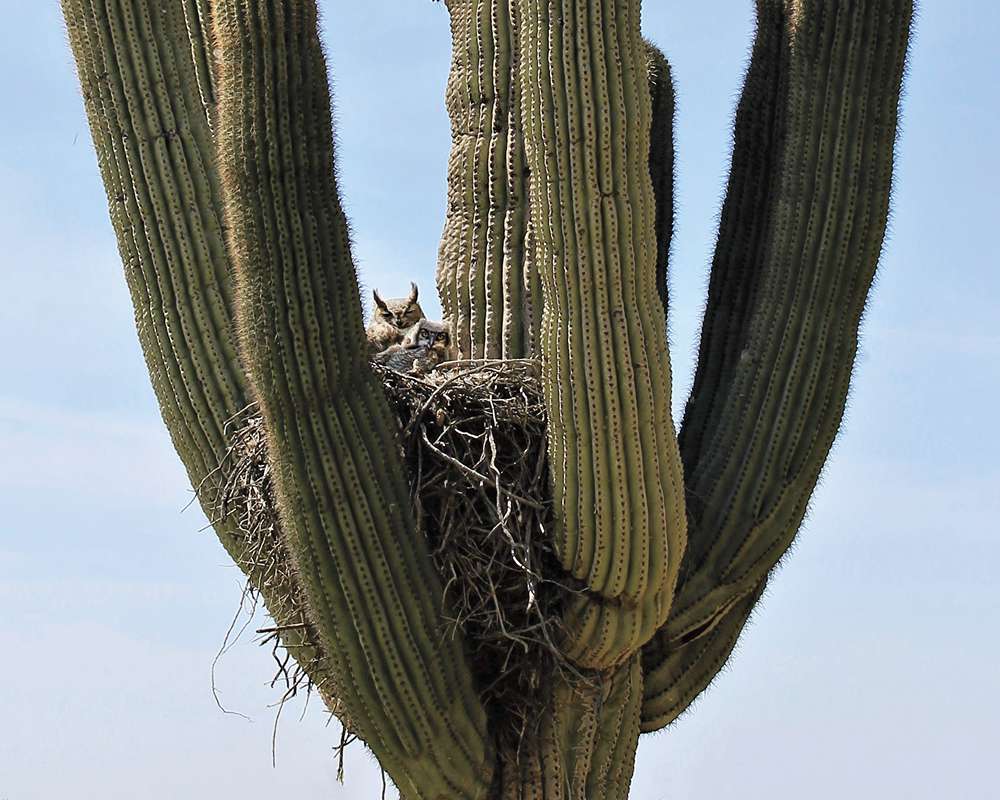 “The Valley is full of hiking trails, which I enjoy exploring when the weather is cool enough. Every year, these great horned owls return to nest in this giant saguaro in the Phoenix Sonoran Preserve. This past spring, I set out in hopes of catching them at ‘home’ and was excited to capture this image of mother and owlet.”
— Joanna Proffitt
Freelance photographer and PHOENIX magazine 2017 photo contest finalist. Her work can often be found on gallery walls around the state.