The beloved resort resto gets its second menu makeover in three years. Will longtime fans approve?

In the summer of 2013, T. Cook’s at the Royal Palms Resort – one of the most venerated fine dining restaurants in Arizona – underwent a remodel to modernize the décor and cuisine. The new and improved T. Cook’s was billed as “New American,” with muted splashes of its Northern Mediterranean roots. It seemed the resort was gunning for a younger crowd, but it was a risky move. Many regulars didn’t have the progressive temperament needed to appreciate sunchoke salad, sea bass crudo with char roe, or an obscure red mullet fish paired with rabbit Bolognese.

Fast-forward two years and T. Cook’s has made another course correction. New executive chef Todd Allison, who attended culinary school in the Valley and worked under James Boyce at Mary Elaine’s, has retooled the menu, scrubbing it clean of newfangled New American dishes, replacing eclectic with familiar. Allison’s executions are technically spot-on, if not exactly trend-setting.

My favorite dish from the old New American experiment was an edgy grilled octopus starter anchored by charred, smoky tentacles and paired with compressed cucumbers, black olive “dirt” and plumped Flame raisins. Octopus is still on the menu, but it’s tamer, with lemon-caper aioli, charred green beans and roasted tomatoes and artichoke hearts ($14). Shareable muhammara ($9/lunch) is a richly textured spicy dip of roasted red peppers, bread crumbs and ground walnuts. At dinner it comes with creamy hummus, but the accompanying paltry slices of radish and cucumbers and flabby flatbread ($11) are uninspired. Why not serve it with the fantastic focaccia provided gratis at the beginning of the meal (along with T. Cook’s famous pesto)?

Resort protocol dictates something for everyone. One minute, Allison will hit you with a righteous burger ($15/lunch and lounge) – juicy beef patty, barbecue-sauced short ribs, melted American cheese and wispy fried onions on toasted brioche – and the next, turn around to plate a nouvelle work of art of pickled golden beets, Crow’s Dairy goat cheese, purple watercress and barrel-aged sherry vinegar ($13) with tweezers. At dinner, surf and turf options abound. Whole-roasted, succulent sea bream ($35) skillfully plays bitter greens off sweet fennel, radishes and Kalamata olives. Wild boar chops ($37) are meaty but not gamey – surprisingly, the braised pork cheek on the same plate sports a stronger flavor. It’s all delicious. I could drink a glass of the accompanying sauce – a demi-glace reduced with caramelized apple.

Maine lobster carbonara ($39) is more mac and cheese than carbonara, with a delicate angel hair pasta that seems disadvantaged from the get-go. However, that didn’t stop us from devouring every last cheesy morsel.

Portions are reasonable, so there’s no excuse for skipping dessert. Most are heavy on the sweet stuff, especially the ever-changing bread pudding, and not exactly memorable – except the silky chocolate praline torte ($12). Come to think of it, there isn’t a whole lot on T. Cook’s new menu that leaves me star-struck. What stands out is smooth service and perfectly seasoned, familiar fare executed with skill. It might not be trendy, but at this price point, it’s a reliable, safe bet. Frankly, I didn’t get rabbit Bolognese paired with mullet, either. 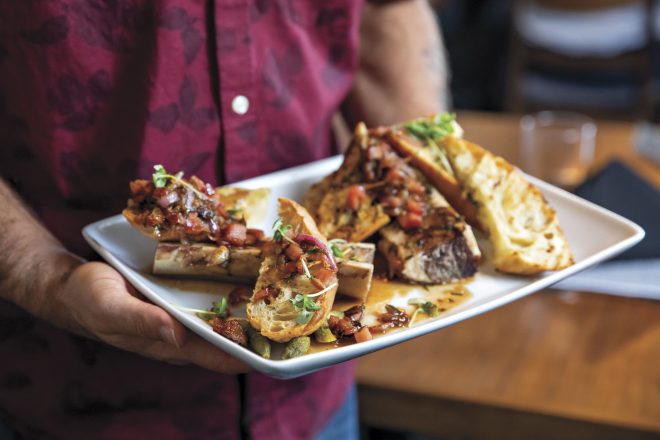