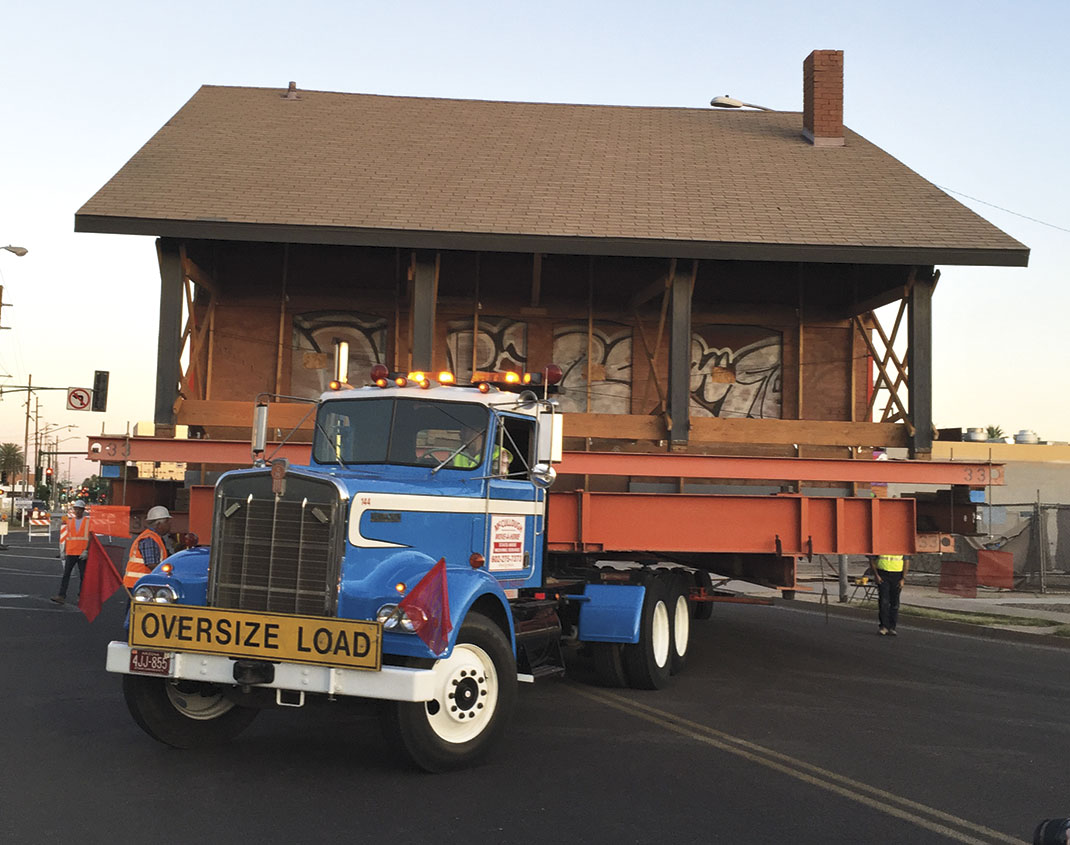 Kimber Lanning saved a vintage house from demolition by moving it to a vacant lot. Will other barren-land owners in Downtown Phoenix follow suit?

Passersby may struggle to see the brick bungalow next to Modified Arts on Roosevelt Row as anything more than a graffiti-riddled derelict. But Sam Moyer, one of its former owners, sees it as the longtime home of a family business. And Kimber Lanning, its new owner, sees its future.

In May, Lanning – owner of Modified Arts and founder and executive director of Local First Arizona – relocated the home at 314 E. Roosevelt St. to its current location across the street. In the process, she protected the old home from demolition and filled one of Downtown Phoenix’s many vacant lots. District stakeholders see the transplant as potentially the first pearl in a string of relocations that will preserve the charm of Roosevelt Row and the Evans Churchill neighborhood and enhance the area’s economic vitality.

The 1911 Joseph W. Wurth House had been in Moyer’s family since 1983, when his father-in-law, Vic Armstrong, purchased the dwelling to serve as the offices of Armstrong Marketing. Moyer and his wife, Debra, acquired the building upon Armstrong’s death. The company was sold in 2006 and the house sat vacant for nearly a decade. Moyer made several unsuccessful applications for historical status – according to Moyer, the first  application, in 1983, was denied because the home wasn’t old enough. Unwilling to bet the fifth time would be the charm, Moyer acquired a demolition permit and began seeking developers to buy the lot. A new path emerged for the home when City of Phoenix officials connected the Moyers with Lanning, who wanted to save the structure. Moyer donated the property in memory of his father-in-law; however, Lanning absorbed the cost of moving it across the street to a vacant lot she owns – preserving the home and allowing the new development to proceed. “Taking this brown space in the middle of town and being able to activate it is an opportunity,” Lanning says. She’s unsure of her plans for the structure; she’s invested $70,000 so far and doesn’t have electricity, water/sewer, or HVAC systems installed. “My total focus is on bringing it up to occupancy, which is going to be a lot of work.”

Greg Esser, a co-founder of the Roosevelt Row Community Development Corporation (RRCDC) and the Evans Churchill Neighborhood Association (ECNA), observes of the home’s role in the neighborhood, “There is an authentic character that’s part of this specific place in Downtown Phoenix that can’t be replicated with new construction.”

Lanning lauds the building’s aesthetic and historical value, but as a business advocate, she has another motivation. More so than new-build neighborhoods, older, mixed-use districts are more walkable, attract younger residents and foster both local retail and creative communities, according to a May 2014 study from Preservation Green Lab.

Maintaining this type of neighborhood is a priority of the RRCDC and the ECNA, which have a bevy homes on a shared wish list for protection. At the top is the Bodega House/Pappas House at 420 E. Roosevelt St., which – though not historically designated – is one of the last remaining homes of its kind in the neighborhood, according to ECNA and Arizona Preservation Foundation board member Jim McPherson. He says the organizations are also looking at the two block section of Fourth and Sixth streets between Roosevelt and Garfield streets, in the same area as Jobot Coffee and Bliss/ReBAR. A planned expansion of the Phoenix Biomedical Campus will put 14 dwellings at risk of being razed. From a preservationist perspective, moving the houses is a last resort, but it’s one the neighborhood is actively pursuing over demolition.

Esser points to “the critical social significance of the original history of these buildings.” The Evans and Churchill sections were two early outgrowths from Phoenix’s original town site; many homes date from the turn of the century. Esser adds strict historical districts don’t foster mixed-use areas with galleries, shops and restaurants – any of which may be part of Wurth House’s next century.

How to Move a House
The Wurth house may have only been moved across the street, but it was an involved process. John McCullough, owner of Move-a-Home, Inc., which relocated the home, breaks it down into a few steps:

With the appropriate permits in place, his team disconnects all the utilities from the house.

Older homes, such as the Wurth House, aren’t secured to the foundation, so they can be moved more easily. Newer homes are attached to slab foundations with rebar, so the rebar must be cut at the base before proceeding.

McCullough places steel beams under the house, then sets hydraulic jacks under the beams to raise the house evenly.

Once raised, Move-a-Home places the home on dollies, then on a truck for transport.

McCullough says he doesn’t approach historical homes any differently than any others. “You have to treat each and every home as though it was a delicate piece of china. On older homes, on which time has taken its toll, the mortar isn’t as good, but you have to move all of them very delicately,” he says. McCullough is soon retiring and closing his business, which has been operating in the Valley since 1967.