At the Herb Box, vegetables play an important role on the menu, according to chef/owner Becky Windels. “I don’t like vegetables to be an afterthought. I like them to be the star – the center of the plate – as much as they can be.” So it makes sense that her two best-selling items are vegetable-centric: Indian spiced kale with corn and onion pakora and Korean fried cauliflower ($12).

Windels devised the cauliflower recipe because she loves the spicy, smoky-soy flavors of Korean cuisine. The taste and texture of the cauliflower mimics fiery chicken wings, but Windels wanted to take those flavors and create a vegetarian dish.

When preparing the cauliflower, Windels dusts the florets in flour and corn starch and then drops the pieces into a batter of vodka and cold water. After the pieces are thoroughly coated, they’re plunged into hot rice oil and deep-fried. The vodka rapidly evaporates in the oil and helps prevent the formation of gluten, making the cauliflower “super light, fluffy and crunchy,” she says.

After removing the cauliflower from the oil, Windels tosses the crispy florets in a butter-based sauce made with Sriracha, soy sauce, brown sugar, gojujang (Korean fermented red pepper paste), and lime and orange juices, then tops the dish with toasted sesame seeds. Served with white quinoa, sugar snap peas and pea shoots, the fried cauliflower has that “wow” factor that Windels tries to inspire with her vegetarian dishes. “I try to make sure that every dish has an element of surprise.” 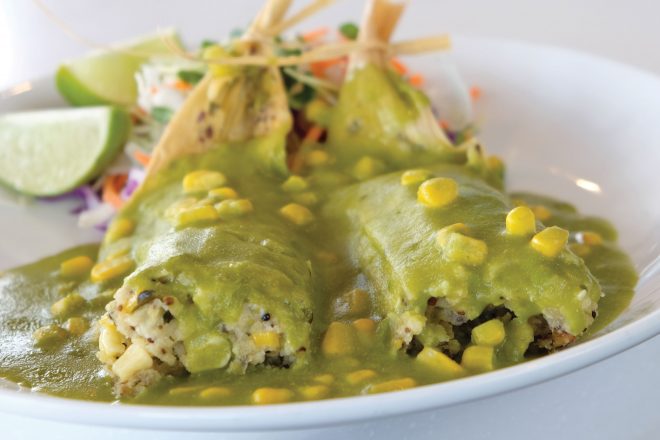 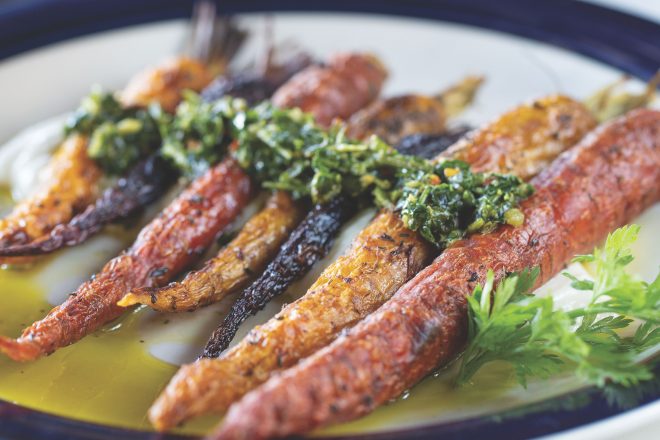