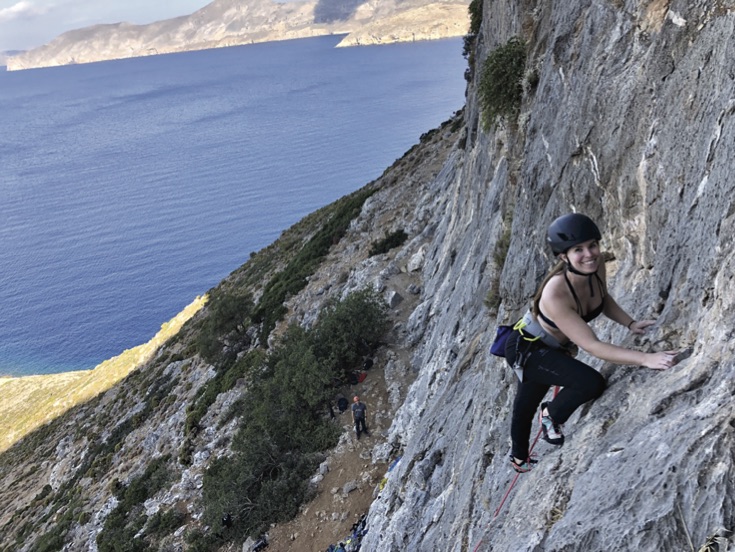 The maxim “work hard, play hard” comes easy for Natasha Beal. She and her husband, Brian, started Eculeus Group Publishing in 2017 and now produce seven hyperlocal publications, including the Deer Valley Times, North 32nd News and Epic Kids. When they are not hard at work, they are rock climbing. “I fell in love with rock climbing over 15 years ago,” Beal says. “I first started at a climbing gym in Scottsdale called AZ on the Rocks and bought a yearly membership after my first day there.” Just before the pandemic hit, the couple took a memorable two-week trip to Kalymnos, a Greek island in the lower Aegean Sea, for an epic rock-climbing adventure that included beautiful hotel views, divine cuisine and cultural sites. Beal shares her Grecian highlights with us.

Daphne’s Restaurant
En route to Kalymnos, the Beals had a layover in Athens and enjoyed a date night. Daphne’s in Athens offered a memorable and educational experience. “The staff was lovely, and the food was to die for,” Beal says. “There were many authentic Greek dishes that were unfamiliar to us, [and] we made sure to share them. We splurged on the bread and olive plate and the Greek salad!” daphnesrestaurant.gr

OKU Kos
OKU Kos is a village-style beach resort on the island of Kos, which sits 4 miles across the water from Kalymnos. It was the Beals’ home base between their rock-climbing excursions. “This resort was amazing! It’s built in a fashion that instantly pulls you out of modern society and shows you the Greek way of life,” she says. okuhotels.com/oku-kos/

Kalymnos Via Ferrata
Italian for “iron road,” the via ferrata in Kalymnos is a climbing adventure for the brave. The route sits 400 meters above sea level and takes four hours to complete. The climb itself is not too difficult, but it requires stamina. “Once we made it to the top, there were breathtaking views of [the island] Telendos and the whole Myrties/Masouri area,” Beal says. “After taking a million pictures, we rappelled down and started the long descent back to our hotel.” directmountain.com/en/activities/322-via-ferrata-kalymnos/