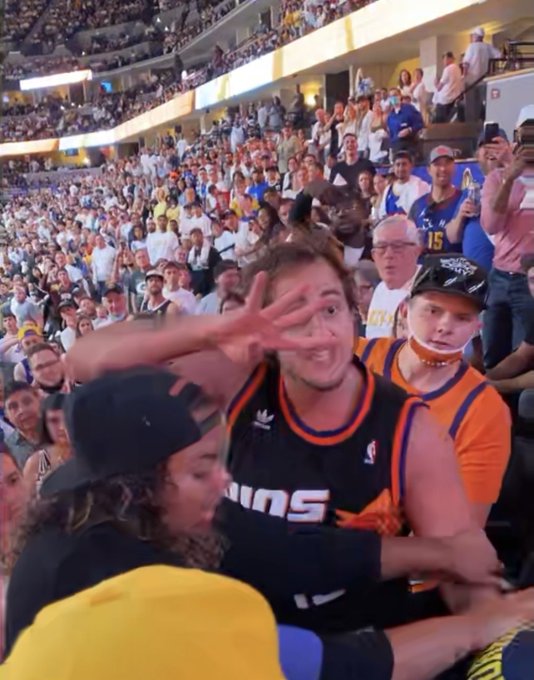 So many feelings, so many takes and so many years of disappointment and bad basketball in Phoenix seem to have been wiped out by this remarkable postseason run by the Suns. Chris Paul, Devin Booker and crew knocked out the Denver Nuggets in a four-game sweep and we have a lot to say about it. Let’s dive into it with our five biggest takeaways from the weekend in sports.

Chris Paul makes a mockery of the NBA MVP results.

Denver big man Nikola Jokic was named NBA MVP before game two of the Suns-Nuggets Western Conference Semifinals. It was a runaway vote for Jokic and well-deserved. Suns point guard Chris Paul finished fifth in the vote, and shockingly was left off the ballot by 49 of the 100 voters. Paul responded in kind by taking over: 17 points, 15 rebounds and zero turnovers in Game 2; then 27 points in Game 3; and finally 37 points in Game 4 to complete the sweep of the Nuggets and the league MVP. It was just the fifth time in NBA history an MVP has been swept in the playoffs.

Nikola Jokic is the 5th MVP to be swept in a playoff series, and 1st since Magic Johnson in the 1989 Finals vs the Pistons.

Jokic is also the 2nd MVP to be ejected in the last 25 postseasons (Steph Curry in 2016). h/t @EliasSports pic.twitter.com/rQVOHhvCI4

Devin Booker knows how to close it out.

Over the first six years of his career, Devin Booker heard the same thing over and over: He’s good but he’s not playing in any meaningful games. Now that he’s got two playoff series under his belt, we are seeing how special Booker is in those meaningful games. Booker’s 34 points and 11 rebounds in the Game 4 win over Denver adds to his short but impressive legacy, drawing a statistical comparison to the greatest of all time, Michael Jordan.

Devin Booker has scored 81 points in the Suns' two closeout wins this postseason.

The only player with more points in his team's first two closeout wins of a single postseason is Michael Jordan (1989 and 1992). h/t @EliasSports pic.twitter.com/JLcJqiBtDe

Big Takeaway: Both of the Suns closeout wins (L.A. and Denver) this postseason have come on the road and Booker has been the superstar many believed he would be. Putting up MJ-esque stats in the playoffs can’t help but make us think this could finally be the year for our Phoenix Suns.

Suns fans are having a moment.

As great of a run that the team is having, the fans may be on a better streak. Whether it’s the huge crowd support the fan base showed on the road in Denver, or the reception they gave the team returning to Sky Harbor Airport overnight, or the “Suns in 4” fan who won a fight against two Nuggets fans in the arena in Denver, or the dancing kid who went viral for ripping off his shirt on the jumbotron, or the drinking crowd that makes #chugginwiththefellas trend every other night – Planet Orange is living a dream right now.

This is picture from a freaking ROAD GAME, man (Garrett Ellwood / NBAE) pic.twitter.com/6OTTptOTeC

BOOK IS HUGHIN HIS MAMA.

Big Takeaway: We didn’t even mention the celebrity sightings courtside in Phoenix: Guy Fieri, Kyler Murray, J.J. Watt, Larry Fitzgerald and Michael Phelps. The Suns are the hottest team in the league, but their fans are burning even hotter right now.

The Arizona Diamondbacks can’t catch a break on or off the field this season. In the midst of one of the worst stretches of baseball in franchise history, the team announced on Friday General Manager Mike Hazen is taking a leave of absence. (Hazen’s wife has been battling brain cancer.) The team followed by getting swept at home by the L.A. Angels, leaving us to wonder if this is the lowest point in franchise history. Nick Piecoro from the Arizona Republic summed up the gawdy number of losses starting to pile up.

Big Takeaway: There’s no hope in sight for this team. The D-backs head to San Francisco to start a series against the first place Giants and then come back home to face the L.A. Dodgers. Wins will be very tough to come by until ace starter Zac Gallen returns from injury, perhaps at the end of June.

There’s not a lot that college football gets right when it comes to its playoff format. The same four or five teams (Alabama, Clemson, Ohio State, Oklahoma, LSU) seem to be only schools in the playoff year after year, so the need to expand to 12 teams has never been greater. Later this week, the College Football Playoff management committee will meet to consider adopting a proposal that would expand the postseason tournament from four to 12 teams. There are no guarantees for conference champions and there’s automatic bids. It would take the six highest ranked conference champs and six other teams selected by the committee. Here’s how the tournament would have looked the past few seasons if it had been adopted earlier.

How does today’s 12-team CFP model fit past seasons? Here’s what the last 4 years look like based on the proposed format. pic.twitter.com/0AYTN2j7Gz

Big Takeaway: This is the solution college football has sorely needed to fix a major problem with its sport. It’s too top heavy and we’re watching the same teams year after year in the playoff. It’s become too predictable and unwatchable once the regular season ends. The best part of the proposal is home games for the higher seed in the first round. That’s an idea every college football fan should get behind.