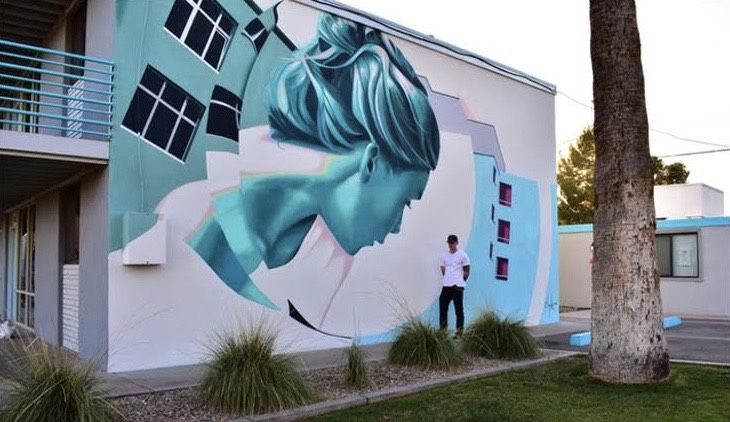 Clyde Thompson is a former graffiti artist who now paints eye-catching murals. Clyde has a great passion for residential architecture, specifically the designing of homes. While Clyde was born and raised in downtown Tempe, he has a huge passion for traveling.

“I’m figuring out the color scheme while I’m painting, which most artists are smarter than that and will have it figured out before they start painting.” Clyde says. He makes it certain that the quality of his murals will last a long time and that the colors he chooses will look good on a large scale.

After graduating high school, Clyde took an art history course at a local community college. This was the first time he had been introduced to art, which inspired him to use his spray paint to create murals rather than just writing his name. He graduated from Arizona State University with a Bachelor of Arts for Design Studies in 2016.

Later this year, Clyde is going to create a new mural on the Central Avenue side of the Renaissance Downtown Phoenix Hotel.

“I like to take my time on pieces and not just do something really quick and leave.” Clyde says.

The Renaissance Hotel, Director of Operations, Brandy Staab explains that the Downtown Phoenix Partnership approached the hotel through a Call to Artists initiative wanting to do a mural on Central Avenue just like they did for the Malinda mural that is right around the corner and hides the speakeasy of Melinda’s Alley.

“With commissions, you are kinda compromising your art to go with whatever they want. With this [Renaissance mural] we were so in sync, and I just get to do my art.” Clyde says.

“We want to be the art link organization that helps connect artists, businesses and communities to create a stronger arts and culture community,” Artlink President Catrina Kahler says. “These Call to Artists are effective to connecting local artists to opportunities that help them further establish themselves as artists.”

“There is going to be a lot of moving lines and various shapes and tons of shades of that [Sedimentary rock] color throughout the entire wall.” Clyde says. “Because there are a ton of shadows that drop over it.” This type of backdrop will enhance the shadows of the wall. Clyde plans to use cool colors like blues and greens to create an effect of cooling down Downtown Phoenix.

“A lot of times murals are compromised because they are so large.” Clyde says. He painted a mural at a 45-degree angle wall that is 140 feet by 50 feet, which currently is the largest mural he’s done. Oh, and he managed to complete it within three days. Clyde is able to camouflage electrical boxes and pipes as seen in his murals titled “Wherever You Go” and “Women in a Dream III.”

Clyde’s biggest inspirations are from the European art scene. Sometimes while he’s painting masterpieces, people will come up and comment about how they see European style in his artwork.

“When I saw the murals in Europe, they looked like pieces of fine art that you’d see in a gallery, just at the scale of 10 to 20 stories tall.” Clyde said. “And ever since then, that has been my goal to create murals that don’t compromise quality and to eventually do something as big as 10 to 20 stories tall.”

When Clyde doesn’t have a project he is working on, you can find him making a living by working for a local general contractor or at a local tree service company.

Clyde is a “does it on a whim” type of person. For four to six months this past winter, Clyde was commercial fishing in Alaska. He heard it was, “the most dangerous job in the world” so without any knowledge of how to fish, he flew to Alaska with a two-day notice.

Local storyteller Raina Bowers first met Clyde when he was her pizza delivery man in college, “He texted me asking to get a drink and I had a That’s So Raven’s, flashback memory of 5 years ago in college.” Bowers said. When she was frequently ordering pizza and Clyde was her pizza delivery man but had trouble finding her apartment one night so he called her for help.

“He is one of the kindest, most respectful, thoughtful people out there and I appreciate that about him very much.” Bowers says. She calls him thoughtful, intentional and eclectic. They have worked on a few projects together but mainly on photographing and dressing models for some of Clyde’s pieces.

“If you’re in an area with a lot of people who are viewing you while you paint, you’re not going to finish it in that day, so you are leaving that progressed work out for everyone to view.” Clyde said. “Some people think it’s finished. Some people don’t know where it’s going.”