Phoenix labors to fix its leaky water pipes during a decades-long drought.

Repairing water line leaks in Phoenix is like doing triage in a hospital emergency room; the bleeding is immediately stopped in only the most critical cases. “It has to do with their magnitude and impact,” Troy Hayes, assistant director of the City of Phoenix Water Services Department, says. “A slow water leak into the gutter is a low priority, while one that blows up an intersection is a top priority.”

Keeping up with repairs and replacement of the city’s aging water infrastructure is becoming more important. Almost 40 percent of Phoenix’s water comes from the Colorado River, which may soon be declared in official shortage. With a decreased water supply, what is the city’s strategy to minimize losses?

Water infrastructure problems have plagued older cities for decades, but the challenge facing Phoenix is even greater, as the sprawling city has more than double the miles of water lines of a denser city like Chicago. Hayes says underground water mains typically last between 75 and 100 years, and age is the best predictor of their failure. Hence, most of Phoenix’s water line problems have occurred in older neighborhoods such as south of the Camelback Colonnade in Arcadia and near Nuestro Barrio in South Phoenix.

The city relies on reports from residents to locate underground water leaks, which are evaluated within 24 hours. Repair crews prioritize larger and urgent leaks that pose a threat to public health, property and safety. Repair time varies, but averages around 10 days. Backhoes are used to uncover leaky pipes – cast iron, concrete or steel, depending on age – but laborious hand-digging is necessary when other underground utilities are too close. Currently there are 48 leaks in the water distribution system that services more than a 540-square-mile area.

It’s difficult to estimate how much water is lost to line breakage per annum, but the Arizona Department of Water Resources mandates Phoenix stay below 10 percent total annual water losses, a figure that includes other factors, like water theft. Phoenix’s 2018 losses were approximately 9 percent, well below the national average of around 16 percent.

Leaks don’t impact water quality to consumers, though there may be cloudiness after a repair. “Residual chlorine takes care of any problems,” Hayes says.

The city’s goal is to replace water lines before they create problems, such as the water main collapse at Van Buren Street and 35th Avenue that engulfed a city bus in 2016. “It made the national news,” Hayes says. “The law firm with the ad on the side of the bus received huge media exposure.” 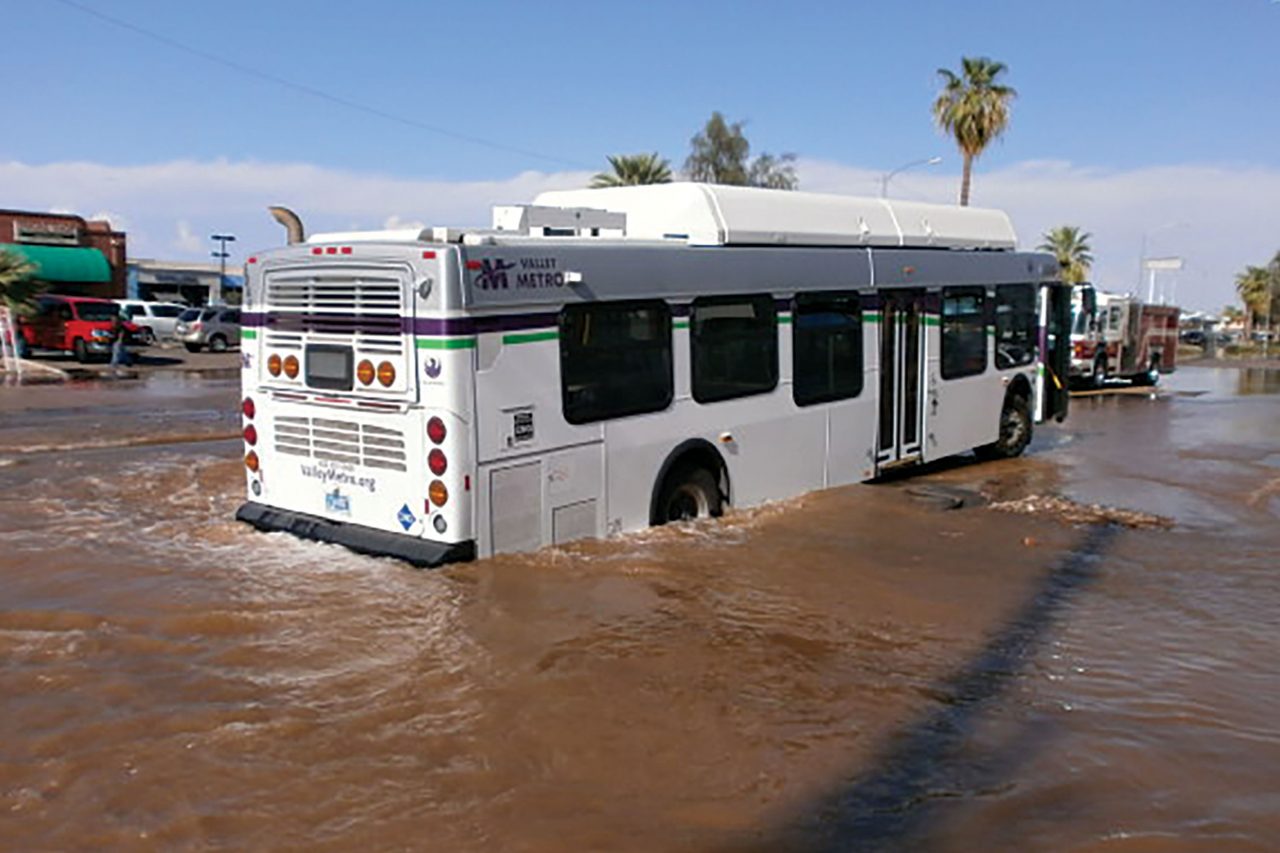 A city bus stuck in a sinkhole created by a water main break at 35th Avenue and Van Buren Street in 2016; Photo courtesy City of Phoenix

But Phoenix’s water leaks seem destined to bubble up more frequently. Lines serving large tracts of the city built after World War II are nearing the end of their serviceable lives. “A drastic amount will become due for replacement in the next 20 years including North Phoenix, Maryvale and Laveen,” Hayes says. The Phoenix City Council refused to open up the funding spigot for this last December. It voted down a 6 percent water rate increase, to be implemented in 2019 and 2020. The cost to replace all pipelines in the Phoenix system is on the order of $11 billion.

Fortunately, not all need to be replaced at once. Phoenix Water Services developed a risk model to determine which need replacement, and in what priority. Pipelines are prioritized based on age, number of breaks, material and size, among other factors. The goal is to be respectful of the cost to customers, who ultimately pay for all replacements through water rates. An average cost to replace the water mains in a block or quarter section (one-fourth of a square mile) is about $5 million. It takes about one year for design and one year for construction. Some water mains in the Willo neighborhood have already been replaced, but would be double that at $10 million.

In January, the council reversed and approved the water rate hike. City staff met with council members about the need for additional resources, which helped, Hayes says. The hike translates into a monthly increase of $4.37 by 2020 for the average residential water customer.

The additional funding will allow Phoenix to perform repairs and replacement and explore a leak detection program. “Our goal is to not waste water,” Hayes says. “We want to conserve this precious resource.”