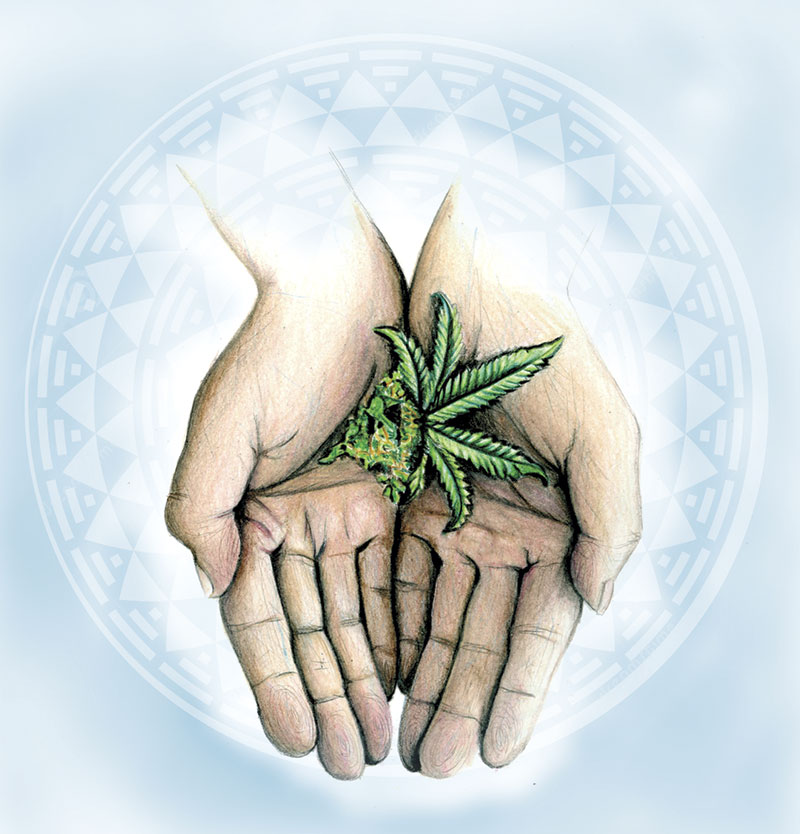 David Washington, aka Uncle David, is undergoing chemotherapy treatments for stage three multiple myeloma, a cancer of the white blood cells. The 60-year-old tribal medicine man, who lives on the Second Mesa of the Hopi reservation at Shungopavi, lost his wife to the same form of cancer. He says he suffers debilitating pain from his condition, as well as nausea from the treatments aiming to cure it.

To ease his discomfort, Washington procured a medical marijuana card, available to Arizona residents since 2011. He received the card from a doctor off the reservation and fills the prescription at a Winslow dispensary, because – technically speaking – his marijuana consumption is a criminal act on his tribe’s lands, placing Washington squarely in the middle of a three-part legal Venn diagram of state, tribal and federal laws pertaining to marijuana. With an October 2014 position letter from the federal Department of Justice now on the books, his tenuous status could be remedied – or it could be murkier than ever.

The DOJ’s memo recognizes the sovereignty of tribal governments and implicitly decrees they may decide the issue of marijuana legalization for themselves, regardless of state laws on medical or recreational use. As stated, the memo affirms the “jurisdiction of the United States to enforce federal law in Indian Country,” but says it won’t be a prosecutorial priority unless the tribes run afoul of eight enforcement priorities that include distribution to minors, sale to gangs and cartels, or if the sale of marijuana is used as a pretext for trafficking other illegal drugs. These priorities will “guide the United States Attorneys’ marijuana enforcement efforts in Indian Country, including in the event that sovereign Indian Nations seek to legalize the cultivation or use of marijuana in Indian Country,” the memo states.

The DOJ’s announcement immediately emboldened several Native American tribes – all of them outside Arizona – to develop commercial marijuana policies, catering not only to tribal consumers but also visitors from states where there isn’t wide access to medicinal or recreational product. “Not only can tribes grow and sell in states that allow medical or recreational use, they can do whatever they want. They aren’t bound by state law,” says Robert A. Williams, the E. Thomas Sullivan Professor of Law and the faculty co-chair of the University of Arizona Indigenous Peoples Law and Policy Program. “Their first reaction was, ‘Wow, this could be the new white buffalo.’ Tribes could make a lot of money.”

More than 75 tribal representatives gathered at the first-ever Tribal Marijuana Conference in February, on the Tulalip reservation in the state of Washington, to discuss the laws and learn about grow operations. Non-tribal businesses – such as Medican, based in Las Vegas, Nev., and Phoenix Pharms, based in Longmont, Colo., who set up marijuana businesses in states that have legalized it – have quickly ramped up advisory arms.

A handful of tribes (see sidebar) are venturing, if hesitantly, into commercialization. Williams recognizes the ease with which tribes’ operations could conflict with federal law, despite the DOJ memo. “It would be risky,” he says. “It could lead to criminal prosecution and the loss in millions of dollars in investment from the tribes to set up the operations.”

Also, tribes must weigh the potential for enterprise with outsized drug and alcohol abuse on reservations. To date, no Arizona tribes have announced a desire to move forward with medical or recreational legalization. Citing public safety issues and concerns that marijuana could be a gateway drug, the Navajo Nation has vehemently denounced legalization. Legalize Marijuana on Navajo Nation, a 585-member Facebook group, offers a counter point to this stance. None of the members responded to requests for comment for this story.

Arizona’s Hopi leadership is generally thought to be more moderate on the issue, but Hopi laws consider marijuana possession a crime, even if the individual holds a medical marijuana card for Arizona. Williams says he doesn’t worry about prosecution – he says he heard from a local judge that the judiciary won’t enforce in those instances. Williams doesn’t believe his tribe will ever move forward with legalization, but also says, “If people are genuinely hurting in some way on their bodies, and it helps with the pain a lot, I think it would benefit the tribe to have our own dispensaries.”

The NEW Black Gold
Support for legal marijuana is growing among u.s tribes.
In June 2015, the Flandreau Santee Sioux Tribe, in South Dakota, voted to legalize marijuana for recreational use on its lands, including for tourists older than 21.
As this article was going to press, the Menominee tribe, in Wisconsin, was voting on legalization.

The Warm Springs, Suquamish, and Tulalip tribes, in Washington, have publicly expressed interest in beginning marijuana businesses. They could more easily do so given that, in April 2015, Washington passed a bill permitting federally recognized tribes to sell and distribute marijuana in partnership with the state’s regulation and taxation infrastructure.

In July 2015, federal agents seized 12,000 plants and 100 pounds of pot from the Alturas Indian Rancheria and Pit River Tribe reservations in northern California. The grow operations were found to overreach California law – and go far beyond the limits proposed in that state’s legislature for legalization.