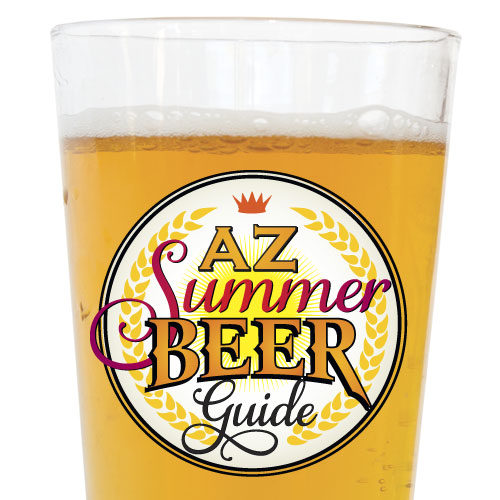 Hop to It
“Hops are used for bittering, flavor and aroma,” local cicerone Ben VanderMeer says, explaining the purpose of the green buds thrown into the brewing process. Since hops in the southern hemisphere are harvested during our spring, many summer craft beers in the U.S. use hops from growing hotbeds like New Zealand and Australia. Here’s a quick primer on some popular hops for summer.
Established breeds:
Amarillo: Grown in Washington state by Virgil Gamache Farms, this hop variety lends an aroma of orange blossom and tangy citrus flavor.
Citra: A special aroma hop variety developed by the Hop Breeding Company in Washington state. Imparts citrus and tropical fruit flavors.
green bullet: A bittering hop from New Zealand with a spicy kick.
Motueka: A variety hop from New Zealand with light lemon and lime flavors.
Simcoe: Used extensively in craft and home brews, this hop infuses beer with tastes including passion fruit and pine.
New hops:
Calypso (2011): Imparts an earthy-piney aroma with flavors of apple and pear. Developed by Hermitage Brewing Company in San Jose, Calif.
Mosaic (2012): Hybrid of Simcoe and Nugget hops from the Hop Breeding Company. Imparts tropical aromas.
Summer (2014): New Australian hop proffers apricot and watermelon flavors, intensified by dry hopping (added after the beer ferments).

Do the Can-Can.“Spending a lot of time in Arizona in the summer means spending a lot of time in the pool, so I think that cans are a great format for summer beers – they’re pool-friendly, prevent spilling more than the old red beer cup, and are recyclable.” – Ben VanderMeer, certified cicerone and East Valley sales representative for Sierra Nevada Brewing Company

OH, PAIR – We tapped a local cicerone, or beer-pairing expert, for answers.

LOCAL SUMMER BEER PICKS
See what the Arizona beer buzz is all about with these easy-to-find bottles and cans.

TAP THAT
Variety is the spice of life… and, for that matter, the measure of any good beer bar. Find your favorite summer seasonals, along with a kaleidoscope of exciting newcomers, at these PM-ranked Valley taphouses. 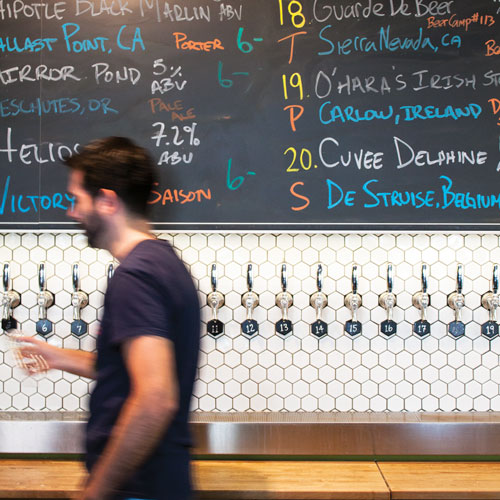 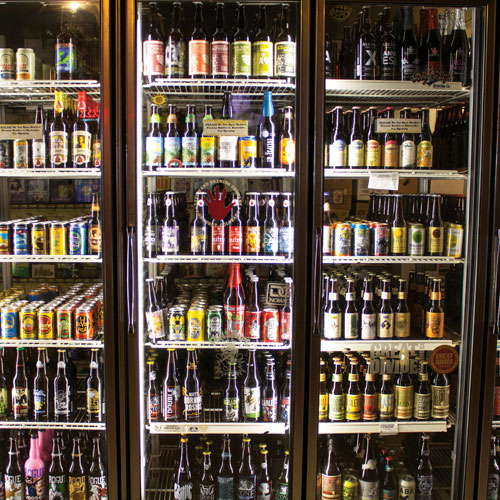 #2 Papago Brewing Part grab-and-bag beer store, part tap room, Papago remains one of the Valley’s top destinations for craft beer experimentation – the rare “brewery” that seems to put as much creativity into its tap program as it does its own brews. 7107 E. McDowell Rd., Scottsdale, 480-425-7439, papagobrewing.com 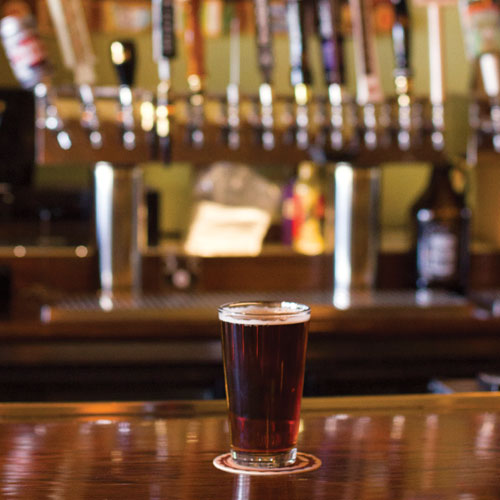 #3 Taste of Tops. One of the Valley’s most enthusiastic champions of Arizona brewing, this near-campus craft beer hotspot hosts frequent tap takeovers and other events designed to venerate local beersmiths. And the Tops tap jockeys know their stuff – from Arizona IPAs to tricky Belgian sours. 403 W. University Dr., Tempe, 480-967-2520, topsliquors.com 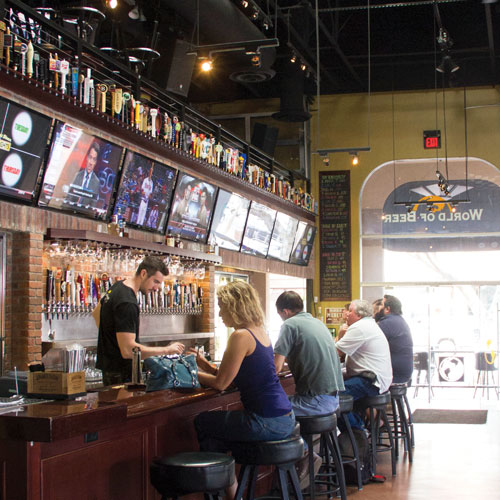 #4 World of Beer. Yeah, it’s a chain, but confronted with 50-plus well-programmed taps and hundreds of bottled beauties, we tend to lose our aversion to Walmart-style retail overkill. The selection is so vast that you can randomly order a flight of esoterics – say, Scandinavian ales with 8 percent ABV or more  – and the barkeep will probably deliver. Two locations. 2224 E. Williams Field Rd., Gilbert, 480-814-1385; 526 S. Mill Ave., Tempe, 480-638-2337, wobusa.com 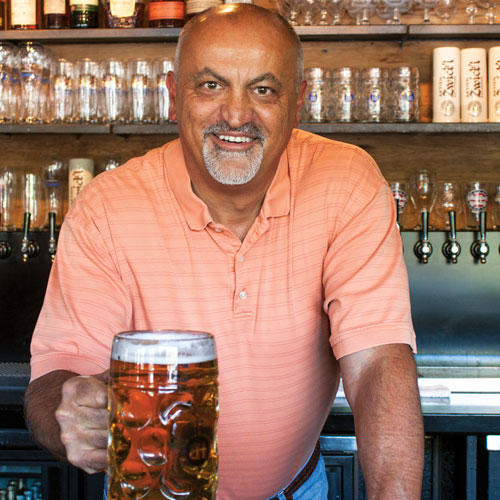 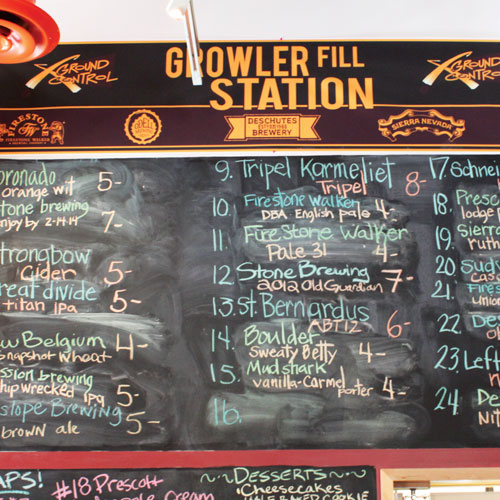 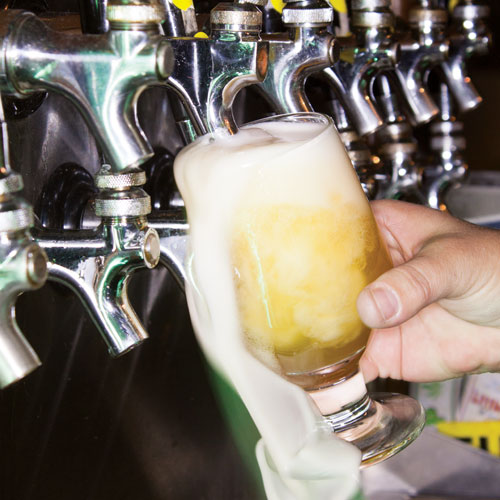 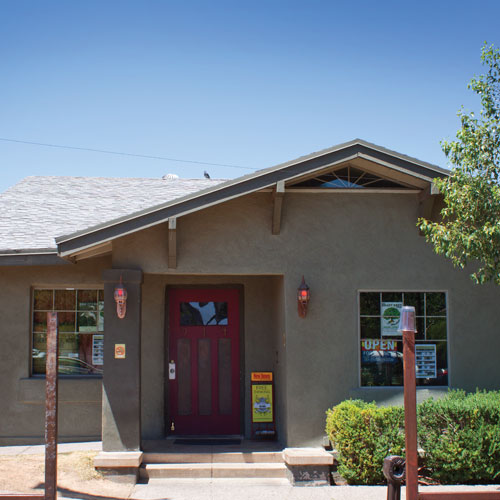 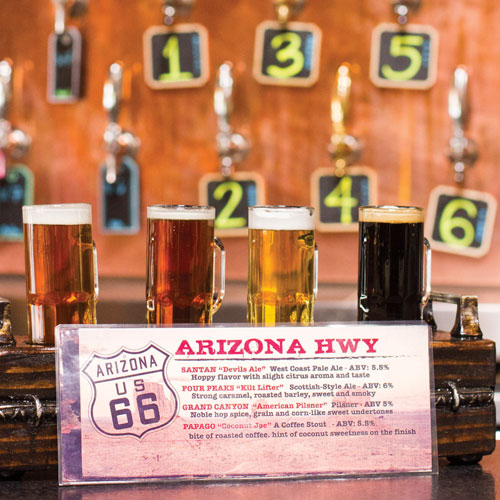 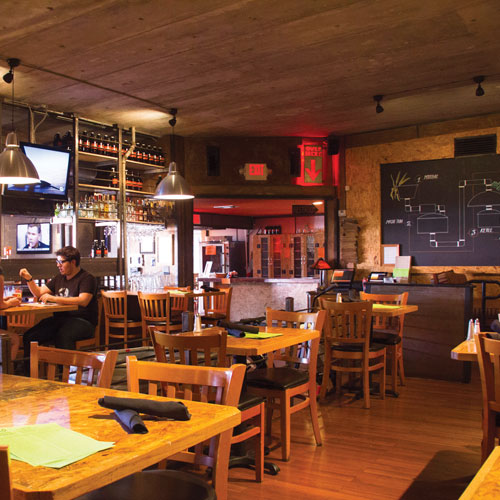 #10 O.H.S.O. The Arcadia hotspot’s new in-house nanobrewery has not degraded its tap program, which always features a heroic selection of Arizona brews, like AZ Trail Ale from THAT Brewery in Pine, and Tucson’s much-lauded Dragoon IPA. And the patio: sublime. 4900 E. Indian School Rd., 602-955-0358, ohsobrewery.com

A year ago, things looked a lot different for the bearded blokes behind Arizona Wilderness Brewing Co. in Gilbert. Founder Jonathan Buford (pictured, middle) had sunk considerable funds – including his entire personal savings, $43,000 from a Kickstarter campaign and his wife’s 401(k) – into his quest to start a brewery. His partners, brewmaster Patrick Ware (left) and business manager Brett Dettler (right), were also heavily invested. On the verge of bankruptcy and foreclosure, after fits and starts and rescheduled openings, they went live in September 2013. Acclaim wasn’t far behind. In January, craft beer connoisseur site RateBeer.comPhotograph by David Zickl; The Wilderness boys toast their success at at Papa Joe’s Barber Shop in Chandler, AZ. named them the best new brewery in the world out of roughly 2,600 that opened in 2013. Business boomed, with Pizzeria Bianco-esque wait times and cold calls from famed brewers in Denmark, craft beer nerds in Brazil and Japan, local and national media, and The Omnivore’s Dilemma author Michael Pollan, who was intrigued by their use of indigenous ingredients in their brewing process, particularly Arizona’s prized (and nearly extinct) white Sonoran wheat berries. Fresh off a profile in Esquire, which also heralded them as the “world’s best new brewery,” the whiskery wilderness men sat down with us to share some beer – smooth Signal Mountain Stout for them, beet-infused Wet Beaver Wit for us – and stories about their wild ride.

So how did you fellas meet?
Jonathan Buford: It was a dark bar, a cold night in January. I locked eyes with him [Ware]. He locked eyes with me. [laughs] We didn’t have cell phones so it was years later that we finally met again [at a beer event]. He worked at SanTan Brewing Company. I owned a window cleaning business and Brett and I had started the paperwork route, you know, business plan, licensing, all that stuff. Brett and I originally met at his restaurant in Cave Creek, called Trophy Steakhouse at the time. We just kind of said, “You want to start a brewery. So do I. Let’s talk about this.”
Patrick Ware: At that point I had already sold my soul to craft beer. I adopted a minimalist lifestyle, sold my car, just accepted the fact that I’m a brewer. This is what I love to do, so I’m going to build my life around that. Part of the lure of leaving SanTan, which was a fast-growing brewery with a lot of opportunity, was the fact that Jon’s and my ideals of what a craft brewery is really aligned… all these disciplines: art, science, mechanical aptitude, agriculture. We want to be a part of the community. We want to use local ingredients. We want to go outside the box.

How did Jonathan get you to come on board?
PW: We went backpacking and explored what Arizona really is like [the Arizona wilderness inspired the brewery’s name, décor and ingredient-sourcing]. We did camping trips [growing up], but when you grow up in suburbia you don’t necessarily get that all the time. This was something he was really passionate about. You get out there and it’s this serene, beautiful thing, but it’s also a challenge. There’s a danger aspect to it that kind of thrills me.
JB: The danger aspect did come to fruition…I had put this band together and we weren’t doing so hot [before the opening]… And [now] we’re about five times over what we thought we’d be in the business plan. There’s some redemption there.

The RateBeer award really put you on the map, didn’t it?
JB: The thing I will say about that RateBeer thing is, there’s been four awards now [they’re the fourth recipient of the honor]. A brewpub had never won it, and there’s a dynamic with the three of us; you see how we’re willing to talk. The other breweries weren’t. Joe, the owner of RateBeer, said “You guys are the most unique of them all because you embraced it. You were willing to talk.”
PW: Mostly you. [laughs]
JB: This is the guy [Ware] who touches every batch of beer, the guy who is mechanically driven, has a creative soul and a very analytical mind. He has all those combined. You can’t really get in Pat’s way. Why? He’s making the best beer in the world right now.
PW: We have this unique brewery. It’s small enough that we can embrace all these local collaborations.

Such as?
PW: We had Superstition Meadery come in yesterday, and a beekeeper.
JB: We’re going to literally go pull honey out of this beehive, put it in a box, come here and centrifuge it in the back and make a braggot [a primeval form of mead] – 20 percent of the fermentables come from honey.
PW: Almost no brewery can do that because they’re committed to a distributor, a brand and specific beers, whereas we’re rotating all the time.
JB: You can see what people wanted by our success so far. It’s not really about us. It’s just [that] we wanted to do something that was wanted, that was needed, that was desired. We’re the ones for that job. I’m calling farmers up, and it’s amazing that [Agritopia farmer] Erich Schultz has never been called by a brewer. Now 80 percent of our beers have had local products go through them, whether it’s grains or fruit… This is a Gilbert thing. This is an Arizona thing. We’re not doing this for awards. We’re doing this to feed the local community.

What are you most excited about for the future?
PW: Biodiesel. We’re starting a biodiesel project today. We’re using the grease from our kitchen. We want to convert it to biodiesel [to use as] a keg delivery [system].

What about your famous Picacho Pecan Pie Brown Ale? Are you excited about that, too?
PW: Oh, absolutely. We were talking about that just now, how someone told me, “Whatever you do, don’t let Jonathan put whole pecan pies in the mash tun.” But we did it, and it turned out to be one of the best beermaking moves we’ve done. It sounds ridiculous, putting a pie in the mash, but there’s science to it. And people do love it.

OH, PAIR
What summer brew pairs well with Thai food? Or jalapeño cheeseburgers? Or cheesecake? We tapped a local cicerone, or beer-pairing expert, for answers.

The Principles of Pairing
“When pairing beers with food, there are three key concepts to focus on,” Valley cicerone Ben VanderMeer says. “One, match strength for strength. Two, find harmonies. Three, consider contrast elements.” Based on those three keys, here are some general suggestions for pairings from VanderMeer.

Consider Contrasts:
“As mentioned previously in the case of Thai curry, carbonation lifts and balances fat and ‘umami’ flavors, as well as balancing sweetness present in other dishes, like desserts. Sweetness balances acidity,” VanderMeer explains. He recommends pairing a raspberry framboise-style wild ale with cheesecake, or for “emphasis,” a spicy vindaloo or chile-laden tacos with a hopped-up IPA. “Hop bitterness emphasizes spicy heat,” he says.

Local Beer-and-Food Love Connections:
Ceviche from Deseo + Bear Wallow Berliner Weisse from Arizona Wilderness Brewing Co.
Deseo at the Westin Kierland Resort & Spa in Scottsdale has long been lauded for its citrus-drenched ceviche offerings, from the lobster escabeche with avocado to the yellowfin tuna swimming in lemon-infused coconut water. Order some to go, but first, “Go grab a growler of Bear Wallow Berliner Weisse from Arizona Wilderness and have some fun with this tart yet balanced, and very unique, AZ creation,” VanderMeer says. “Add mango, and harmonize the sweetness of the beer with the sweetness of the fruit.” 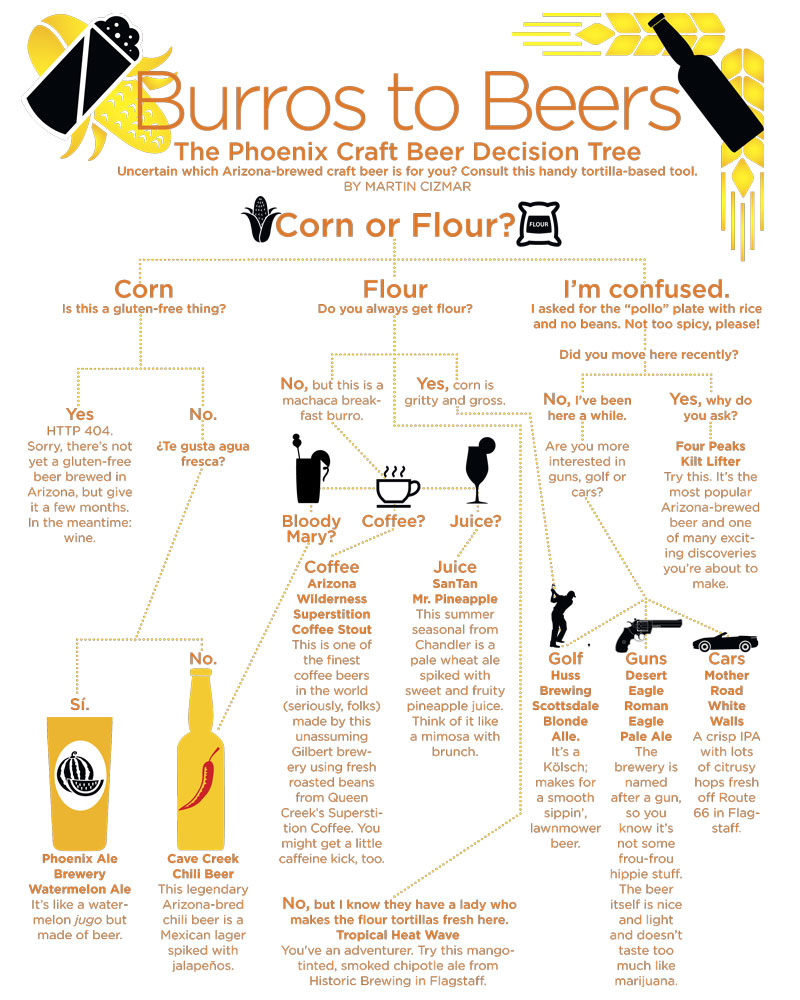