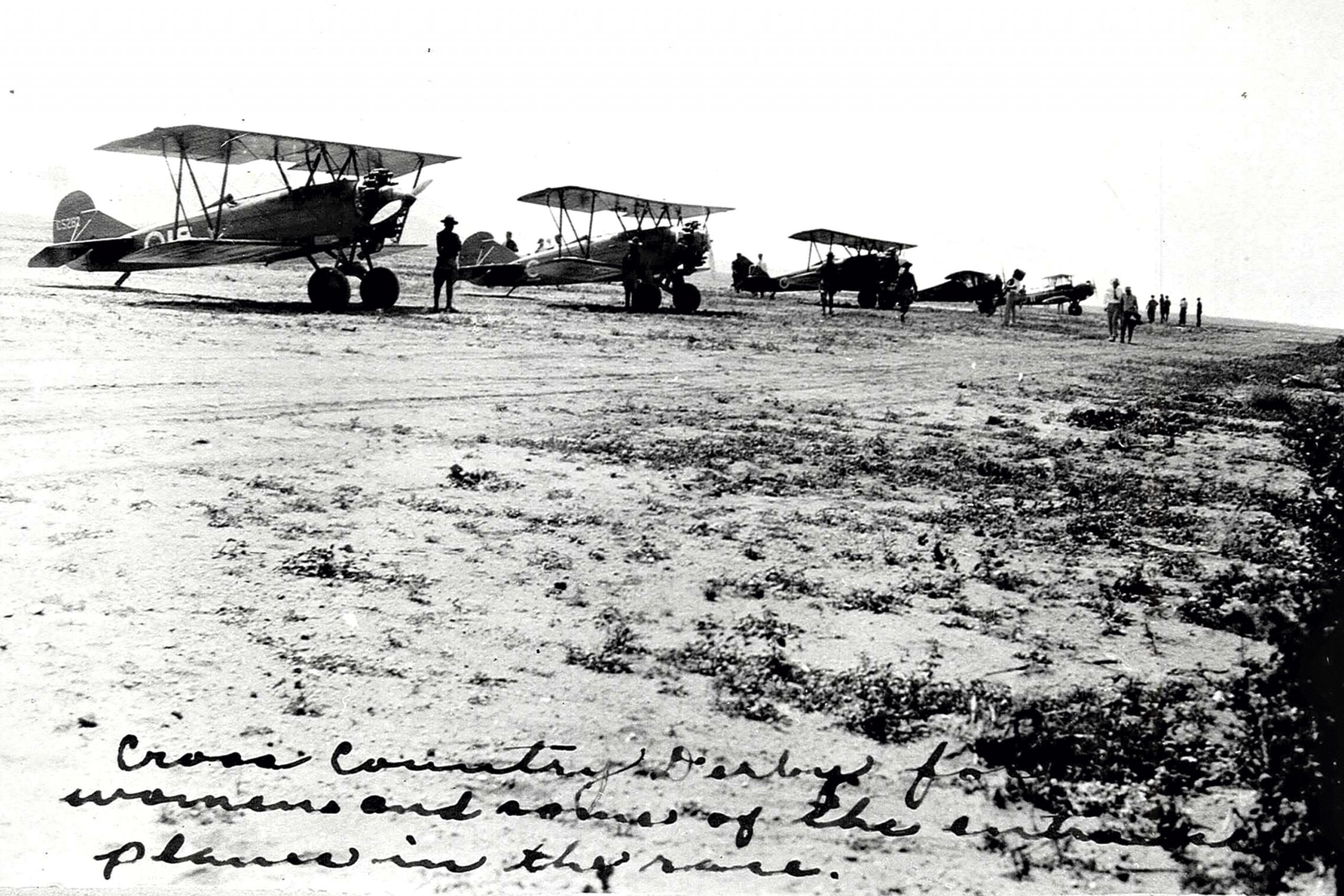 In its heyday, an all-but-forgotten airstrip in tiny Douglas, Arizona, catered to the likes of Amelia Earhart and Eleanor Roosevelt as America’s first-ever international airport. It’s now for sale.

Rumbling down the runway of Phoenix’s Sky Harbor Airport in August 1929, Amelia Earhart had no idea “death and dissension” awaited as she lifted off on a 220-mile sprint across the Arizona desert. As reported in the Tucson Daily Citizen, she just knew she had to make up for lost time after that fiasco in Yuma, when she hit a sandy patch at the end of the runway, causing her airplane to nose over and crumple the propeller. Now in fifth place in the world’s first-ever female-only cross-country air race, Earhart pushed her newly repaired plane to the limit, blasting south toward Tucson.

Banking east as she passed over the Old Pueblo, Earhart navigated across the saguaro-studded landscape with only a compass and some road maps pinned to her flight jacket – perhaps with the new Navajo “thunder bird” pin officials had presented to her and her fellow racers at a fancy reception and fried chicken dinner at the Hotel Westward Ho back in Phoenix. Spotting the towering smokestack marking her destination, Earhart buzzed the finish line packed with spectators before looping back around and bringing her plane to a bouncing stop just a few yards shy of the Mexico border. 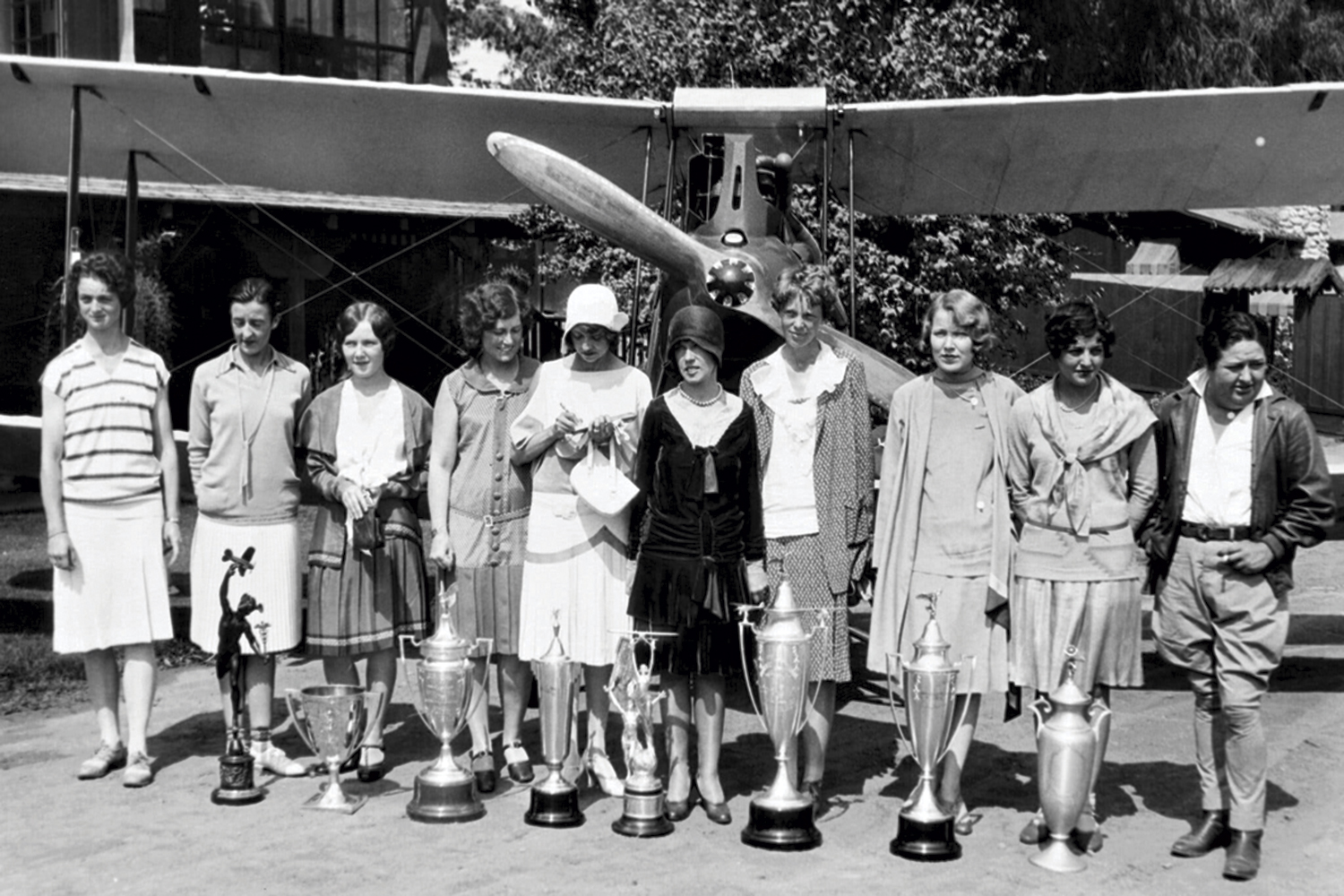 Now in third place, Earhart climbed down from her streamlined race plane and hopped onto the baking-hot tarmac in Douglas, Arizona. Just another day in the life of one of the world’s most famous aviatrixes, one of 15 female fliers still competing in Women’s Air Derby – dismissively nicknamed the Powder Puff Derby – from Santa Monica, California, to Cleveland, Ohio. (The racers would soon learn at yet another reception and fried chicken dinner that one of their missing competitors had died in a crash outside Wellton, Arizona, voting to continue the race despite the dramatic headlines about death and dissension.)

But why would this world-renowned air race make a pit stop in an obscure Arizona border town? Because this scrappy copper-smelting town was home to America’s first international airport. And it remains one of the most important, if largely forgotten, places in the history of aviation. 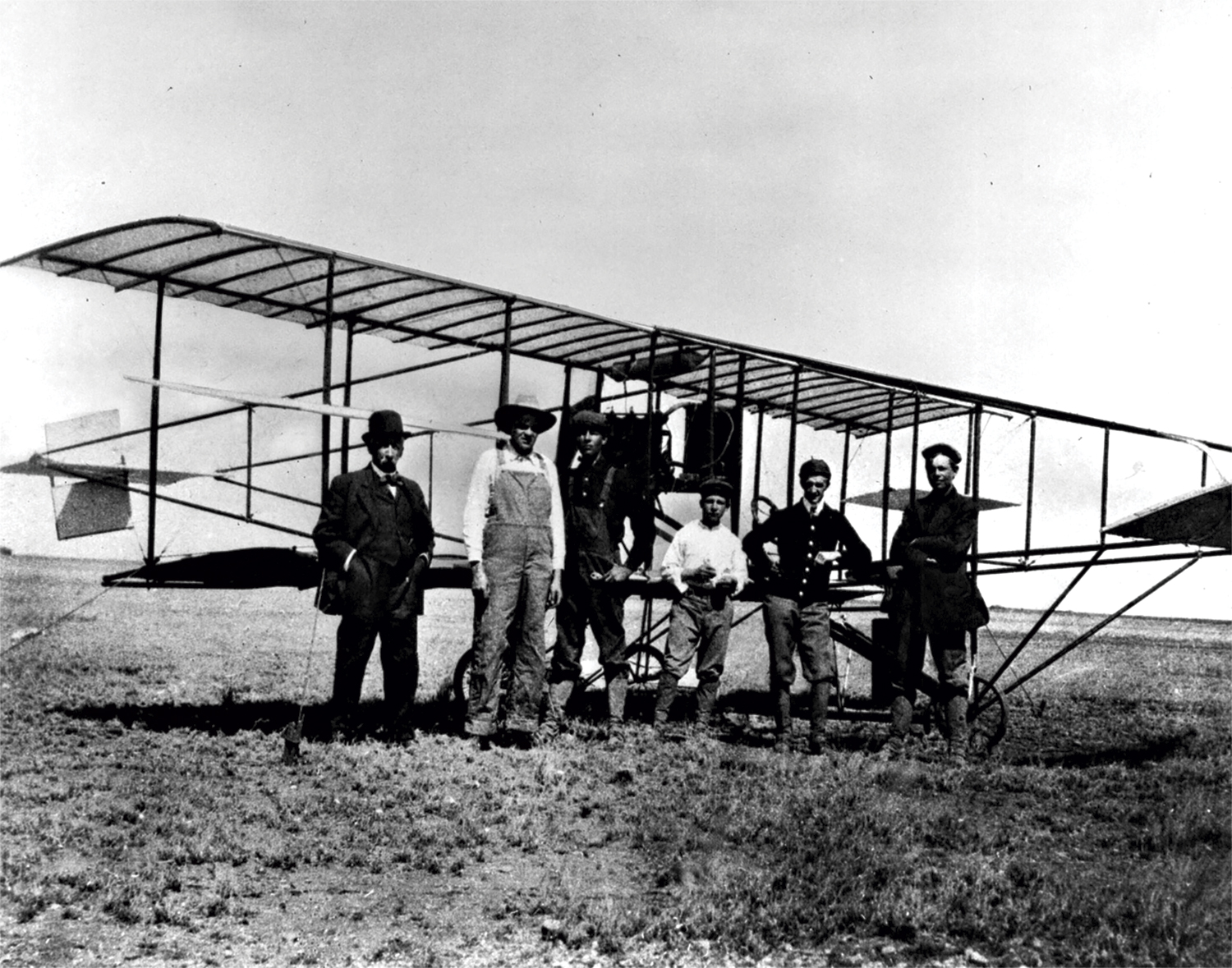 The state’s first-ever airplane flew here, in a field behind the Douglas YMCA, in 1908 – just five years after the Wright brothers proved human flight in motor-operated aircraft was possible. Delivered via mail-order and assembled by local aviation buffs, the glider-like contraption had two horsepower, literally, as it was pulled aloft by a pair of horses. Later upgraded with an engine and wheels, the so-called “Douglas Bomber” was also the world’s first-ever military airplane, hired in secret by the U.S. Army to fly reconnaissance and even drop crude explosives across the border during the Mexican Revolution, according to Border Air Museum in Douglas.

The world’s first “dogfight” aerial battle also happened just across the border in 1913, when two American pilots exchanged pistol shots while flying as mercenaries for opposing sides in the ongoing revolution.

As the town’s wealth and population swelled in the shadows of the sky-high smokestacks that smelted 7 percent of the world’s copper, it was only natural that the aviation-obsessed community of Douglas would construct the state’s most state-of-the-art airport. But it was local electricity baron and architect J.P. Sexton who was credited with putting the “international” in Douglas International Airport, designing a shared north-south runway and a twin Agua Prieta airport directly across the border in Mexico. Planes could land in one country, then taxi into the other country via a roll-away gate in the border fence, after passengers paid the 75-cent permit fee.

It was a revolutionary innovation for air travel between the two countries, which at the time required international flights to land at the airport closest to the border for the passengers to exit and clear customs. Then they’d fly across the border to the closest airport, land and repeat the process again, all before flying on to their final destination, according to Ruth M. Reinhold in The Journal of Arizona History. “The first international crossing took place February 4, 1929, a Ford Trimotor owned by Golden State Airways. This arrangement lasted into the 1930s,” local historian Cindy Hayostek explained to FLYING magazine.

After Earhart rode off into the sunrise (aka El Paso, Texas), the biggest honor for the airport came in 1933, when first lady Eleanor Roosevelt diverted her cross-country flight to spend all of 20 minutes in Douglas. A historic marker now stands where she officially dedicated America’s first international airport by breaking a water bottle over a flagpole – it was Prohibition, after all – before continuing on to Los Angeles, according to the Historical Marker Database.

Today, the traffic at this once cutting-edge facility has dwindled to a trickle. The newer and nearby Bisbee International Airport stole away any passenger traffic back in the 1950s. But the final tailspin started when the copper smelters closed in the late 1980s, and the mining executives, and their private airplanes, pulled chocks and jetted away.

Just this year, the city of Douglas announced it can’t afford the $8 million in repairs and upgrades needed to keep this historic airport in service, and is actively seeking a buyer who can. As part of the sale, the new owner would have to keep the airport open to the public and preserve other aspects of this historic field, like the sun-cracked runway that still ends just yards from the newly reinforced border fence with Mexico. And no, you can’t call ahead to have it opened for entry anymore.

A timeline of the pioneering pilot in the Grand Canyon State:

1928 – Flying across the U.S. for the first time, Earhart shocks the owners of a remote ranch outside Bisbee when she suddenly drops out of the sky with an overheated engine, and then stays for dinner while her plane is patched up.

1929 – Riding as a celebrity spokesperson for the inaugural “East to West” passenger “flight” from New York to Los Angeles, Earhart arrives in Kingman, where her fellow aviator, Charles Lindbergh, joins her for the final leg of this 49-hour journey combining planes and overnight trains. 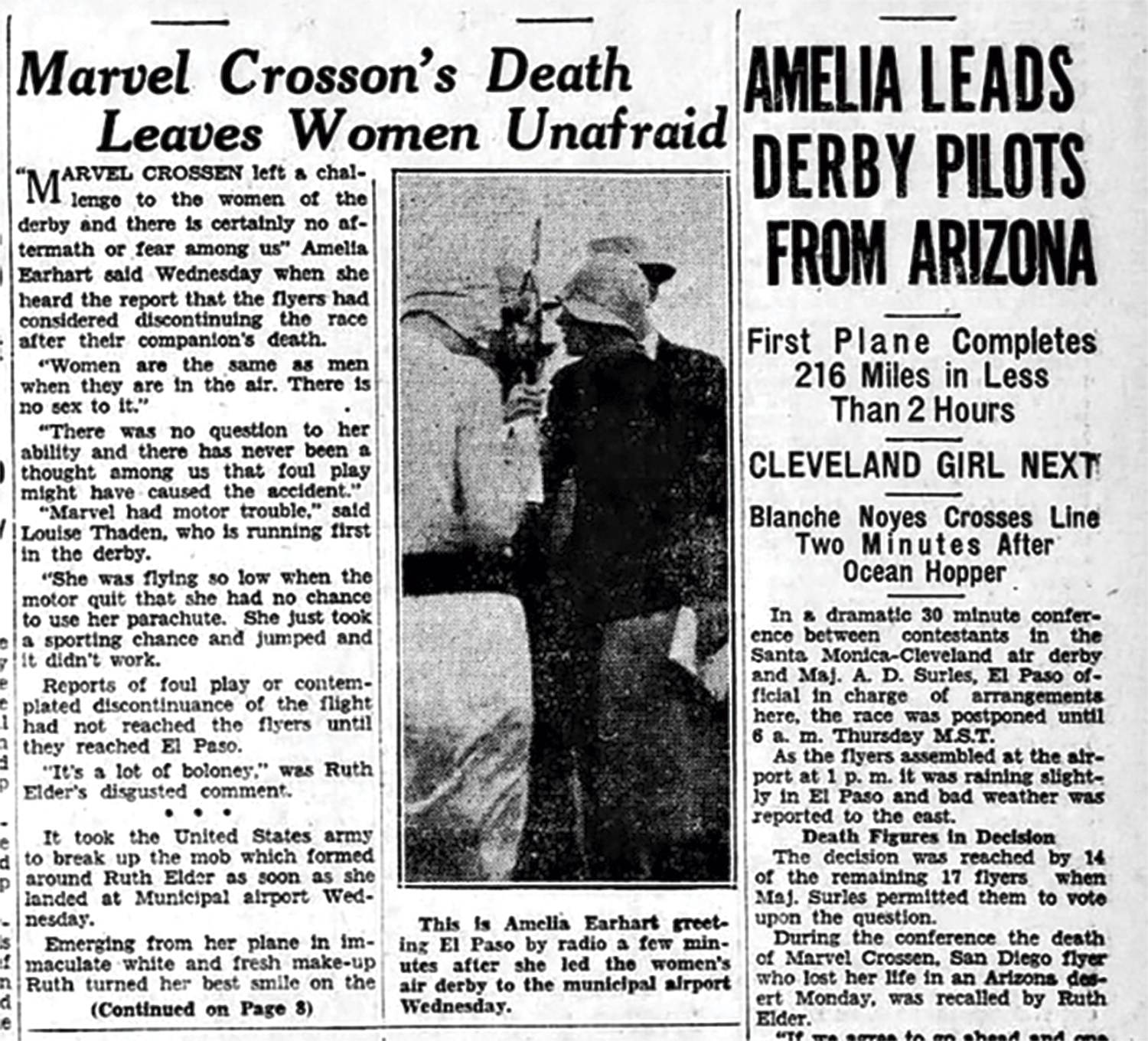 1937 – After secretly setting off on her fateful final attempt to circle the globe, Earhart makes a fiery refueling stop in Tucson, where an engine explodes after landing. Following a quick repair, and after purchasing “one dandy big extinguisher,” she flies on for another 40 days and 22,000 miles, before disappearing on the final stretch flying across the Pacific Ocean back to America.

2022 – Earhart’s leather pilot’s helmet that she wore while racing across Arizona was sold at auction for $825,000 by the son of a woman who’d found it at the finish line in Cleveland.