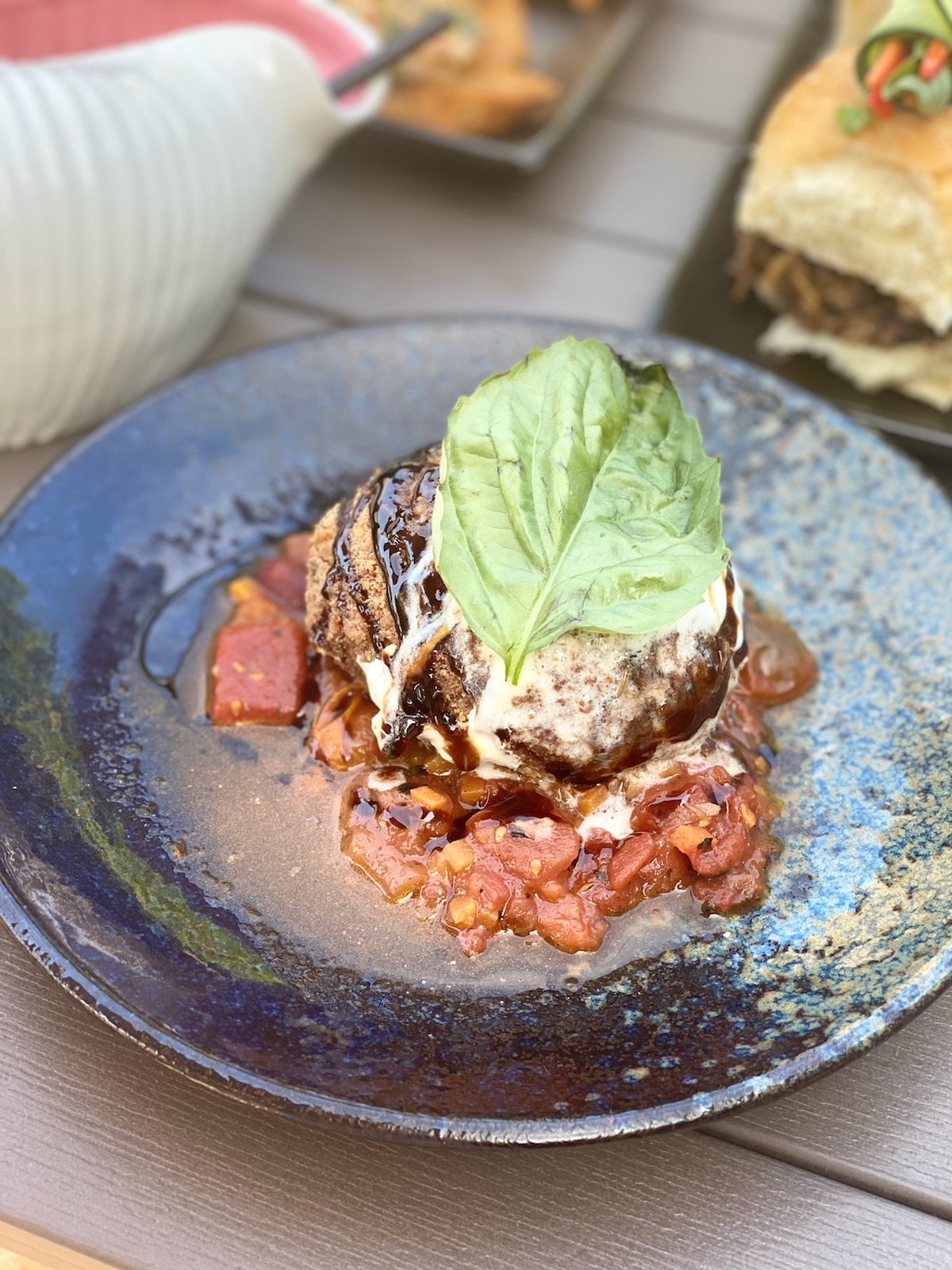 How many of us would love to go back to that carefree feeling of frolicking around the playground as a child?

Indeed, it would be pretty cool to relive those memories as an adult – perhaps even with a cocktail in hand. Good news for the young at heart: Recreo, a new playground-themed restaurant in downtown Chandler, is serving up inventive eats and playful cocktails with a serious side of nostalgia.

The expansive patio and courtyard are modeled after a schoolyard, complete with a school bus art installation, yard games and swings instead of seats at the bar. A stage constructed out of shipping containers allows ample space for live music. The food menu is just as fun and creative. Instead of standard sections like “appetizers” and “entrées,” Recreo opts to take its patrons on a foodie adventure. Starters are referred to as “takeoffs,” with subsequent sections labeled as “layovers” and “destinations.”

Start your culinary journey with breaded burrata perched atop a bed of stewed heirloom tomatoes and crowned with créme fraiche and a fresh basil leaf. It’s sophisticated, but indulgent and playful – and downright delicious. Burrata is one of my favorite foods and this creative take on it is a breath of fresh air – I’m already feeling youthful and happy-go-lucky.

Next, go for the shrimp and crostini, which puts a little seafood-centric spin on bruschetta. It comes with five toasted slices of olive sourdough bread, each topped with a succulent prawn drenched in butter, lemon, basil and white wine, and baby heirloom tomatoes. It sort of sounds like something that would be served at a fancy dinner party, but here it just feels like a fun twist on a classic hors d’oeuvre.

I also recommend the Chill Outs as the sweltering Arizona summer approaches. It includes fresh fruit and veggies served with a side of Tajín and jackfruit yogurt for dipping. Eating your vegetables has never been so fun. Burgers, salads, sandwiches, charcuterie boards, pasta and decadent desserts (labeled as “the landing” on the menu) are also part of this whimsical gastronomic expedition. Drinks, of course, also align with the theme. The signature cocktails include the bacanora-based Hot Pink! with prickly pear, watermelon and shishito pepper, and the shareable Second Star to the Right, which has a boozy fruit punch vibe. Each cocktail is served in a fun and funky vessel – think glasses shaped like conch shells and cacti.

Recreo adds a fresh and lively feel to downtown Chandler, an area that honors tradition and rich history. The space in which Recreo is situated is an integral part of that narrative – the building was constructed nearly a century ago and sits below the former office of the city’s founder, Dr. A.J. Chandler.

In fact, repurposing the site while retaining its legacy was of utmost importance for Allium Hospitality, the development company behind the concept. According to the company’s founder, Chris Field, the primary objective was to recreate the space to honor Arizona and its “melting pot” culture while also creating new experiences for the community. “Recreo celebrates the history of Chandler, while simultaneously looking forward to its vibrant, bustling future,” he says.

Soon, the restaurant will extend its hours for “Recreo After Dark,” when the string lights suspended above the “schoolyard” come on and the space truly comes to life. The best part of hanging out on this playground? No curfew.