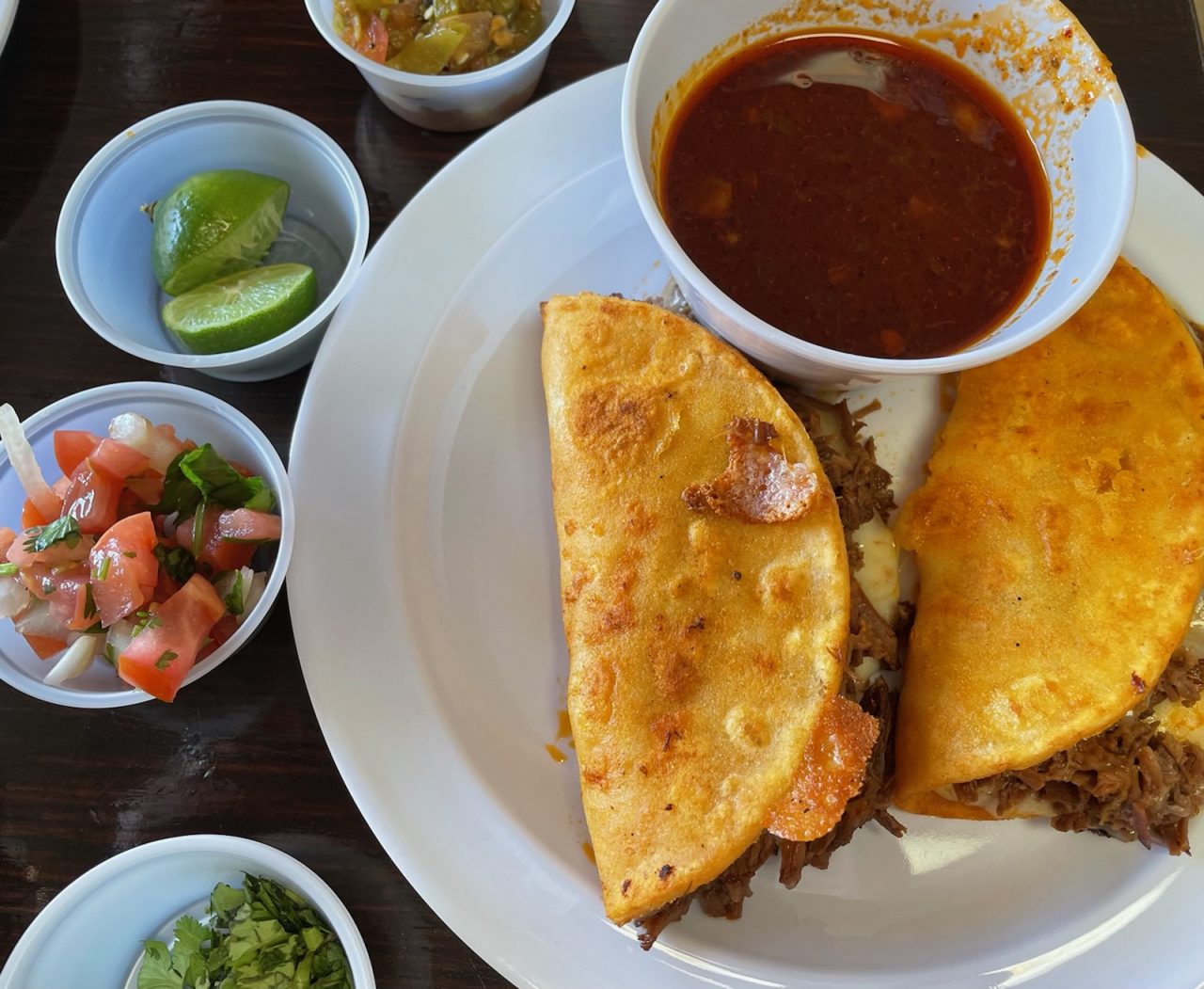 There was a day when Mexican food here in Phoenix meant just one thing — an Americanized hybrid cuisine that generally involved globs of yellow melted cheese. I’m not complaining. I grew up on the stuff, and I still love it to this day. But it’s pretty cool that over the past 20 years or so, we’ve been introduced to more and more regional specialties that demonstrate the vastness and nuance of Mexican cooking — the mariscos of Sinaloa, the moles of Oaxaca, the birria and tortas ahogada of Jalisco, the cochinita pibil of the Yucatan— all so easy to love. But now, the pendulum has swung back the other way and we’re celebrating the simple, straightforward dishes we know best, the carne asada tacos and machaca burritos of Sonora, Mexico’s bread-basket and AZ’s closest Mexican neighbor.

Lots of restaurants are suddenly touting Sonoran cooking (Rene Andrade’s terrific Bacanora among them), and one such newcomer is Tacos & Hot Dogs Los Mayitos in East Mesa, cited by Yelpers as a great place for Sonoran hot dogs. Housed in a strip mall with lots of other Mexican businesses, Los Mayitos is spartan but comfortable, featuring lots of windows, a TV tuned to sports and a salsa bar offering the usual garnishes and condiments, including a guacamole so creamy it barely tastes like guacamole at all. The menu is as straightforward as the décor, zeroing in on tacos, burritos and hot dogs but offering a random bit of this and that: a chimi, a quesadilla, a gordita, a tostada and more. Because I read the word “mesquite” on some signage before entering the building and “al carbon” on the menu, and because the place specializes in Sonoran-style food, we order a carne asada taco as a bellwether for authenticity. Sadly, there’s no discernible smoke and not much flavor, just slightly dry little nubbins of beef on a corn tortilla ($2.50). The al pastor taco is moister and more flavorful ($2.50), but I wish now I’d tried the cabeza.

Call me crazy, nitpicky, whatever, but I’m equally disappointed with the bacon-wrapped hot dogs, tucked in split top buns so soft they fall apart. Both arrive decorated with copious squiggles of mayo, mustard and guacamole, the buns stuffed with grilled onions, tomatoes and incredibly bland pinto beans. Somewhere in there is a skinny hot dog that does bear a hint of smoke and char — probably from the bacon. One of our dogs (the better one) comes with green chile; the other is nestled in a cheesy bun. Frankly, there’s not a heck of a lot of difference between the two (both $5).

On the flip side, the quesabirria taco — a messy, cheesy taco aberration invented in Tijuana — is straight-up delicious. Tinted a faint orange from a dunk in the birria consommé, its shell has been fried crisp, while the melted cheese and juicy shredded beef inside it meld together and ooze out its edges. It’s a steal at $3. Pozole Rojo is offered on Saturday and Sunday, and it’s worth planning your visit around it. Served in a generous bowl brimming with hunks of tender pork and hominy, this rich, brothy, faintly greasy soup is brick-colored like the red chiles with which it’s made, its earthy flavor echoed in the hominy and crisp tostadas served as accompaniment ($10.50).

Obviously, I’m not 100 percent convinced this place is great, but the quesabirria tacos and pozole are compelling evidence.