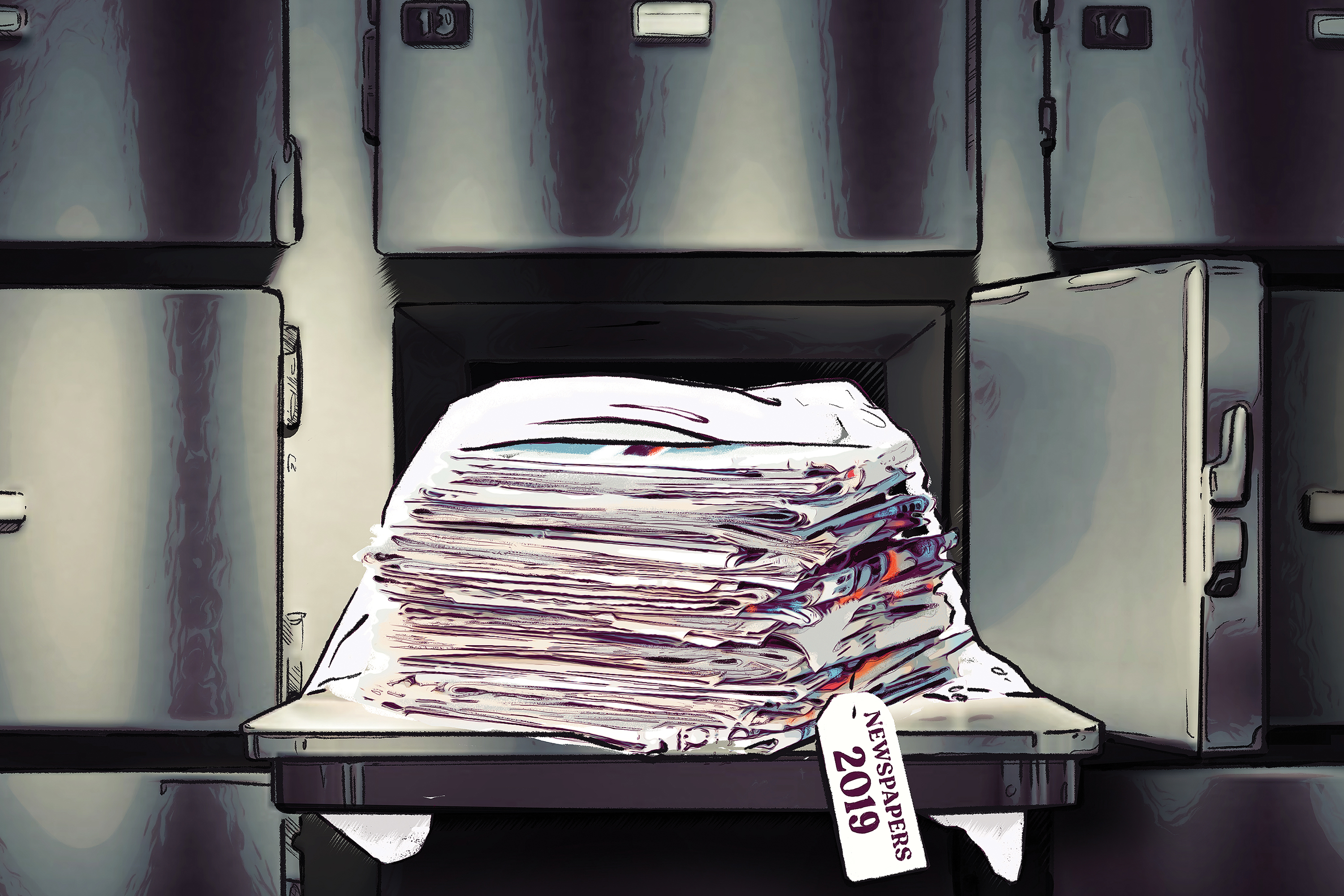 Raised on newspapers, our columnist ponders the election-season news cycle in a print-deprived world.

Some of my best friends are librarians. This comes in handy when I’m looking for a new graphic novel for my kid or searching for the etymology of a word – and when I’m having an existential crisis over how I should be consuming the news.

This fall, I paid a visit to my friend, Sativa Peterson, who has one of the best jobs I can imagine – newspaper librarian for the state of Arizona. She spends her days in a chilly warehouse that holds the state’s largest collection of newspapers, dating back more than 100 years.

For Sativa, old news is good news. In her office, we carefully turn pages of bound copies of her hometown newspaper, The Winslow Mail, and look on microfilm at publications created in 1940s-era Japanese internment camps and at the state prison, circa 1930.

“Reading the old newspapers, you just get to see a diversity of voices and viewpoints, and how each of these towns had a distinct set of ways they celebrated, and things they held dear… And it’s all in the paper,” Sativa says. But that’s not really why I’m here. I’m trying to figure out how to tackle the 2020 election season when it comes to media consumption.

No matter your political proclivities, I’m guessing the 2016 election season was tense for you. It was for me. I emerged feeling like I’d been spinning my wheels hard for no reason, and one morning in early 2017, right in the middle of my usual routine of waking-up-making-coffee-reading-headlines-watching-TV-news-racing-to-the-car-and-switching-on-the-radio, something in my head went “PING.”

I couldn’t do it anymore. I still glance at the headlines in the morning and throughout the day, but now I resist the urge to join my journalist husband in front of the TV as he frantically channel-surfs for every scrap of nuance. I started listening to the Gilmore Girls on Netflix in the car. I unfollowed the president on Twitter. And guess what? I didn’t miss a thing.

OK, true, I am better equipped these days to discuss Rory Gilmore’s sex life than the mess Donald Trump has made with Ukraine, but it’s a small price in exchange for my sanity. If I really want to catch up I watch Saturday Night Live because, let’s face it: SNL’s writers are simply repeating the headlines. There’s no way to lampoon current events, not these days.

I jumped off the news merry-go-round, and I feel so much better for it. There’s really just one problem. I promised myself I’d be back in 2020.

This is why Sativa and I are shivering and talking about newspapers. We pull out old guides for the Arizona Newspaper Association and discover that in 1980, the state had 20 daily newspapers. That number’s dwindled to 12 – even though the state’s population has more than tripled. In January, GateHouse will gobble up Gannett in a media merger that could greatly impact local journalism in many places, including the Valley. GateHouse owns the weekly Arizona Capitol Times and Gannett’s got The Arizona Republic. Given the company’s reputation, it’s hard to imagine that the Republic will escape cuts. The Cap Times might not survive at all, and that’s a shame at a time when we need government scrutiny more than ever.

One of the state’s largest newsrooms today is located at Arizona State University’s Walter Cronkite School of Journalism and Mass Communication. That’s not unusual. J-schools across the country are producing the lion’s share of many states’ reporting – which is fine, until you ask yourself, “Where will all these students work?”

Sativa’s department subscribes to about 40 publications, but they’ve started harvesting PDFs for some instead of hard copies. “That’s a real turning of the ship for this collection,” she says. She’s OK with it. “I read my news online… I don’t think it’s less valuable in terms of the information I’m receiving, but I do feel this pressure as a newspaper librarian that I have to keep these physical copies because someday somebody is going to ask what a newspaper looks like.” And smells like. I breathed deep. I’m just old enough to recall using rubber cement and X-Acto knives to build newspapers.

Nostalgia aside, I get it. The printed material is literally piling up around me, books I just had to buy, blue bags holding the Sunday New York Times, back issues of The New Yorker and other magazines. It’s gotten so bad that I abandoned my home office to the piles and rented a co-working space. I’ll get to all that paper – someday. Really. Or will I?

Exactly. Maybe abandoning the merry-go-round wasn’t such a good idea, if only because I’m still not sure how I’ll be able to bring myself to hop back on. I’d rather go back to visit my friend, and spend the day reading old news.