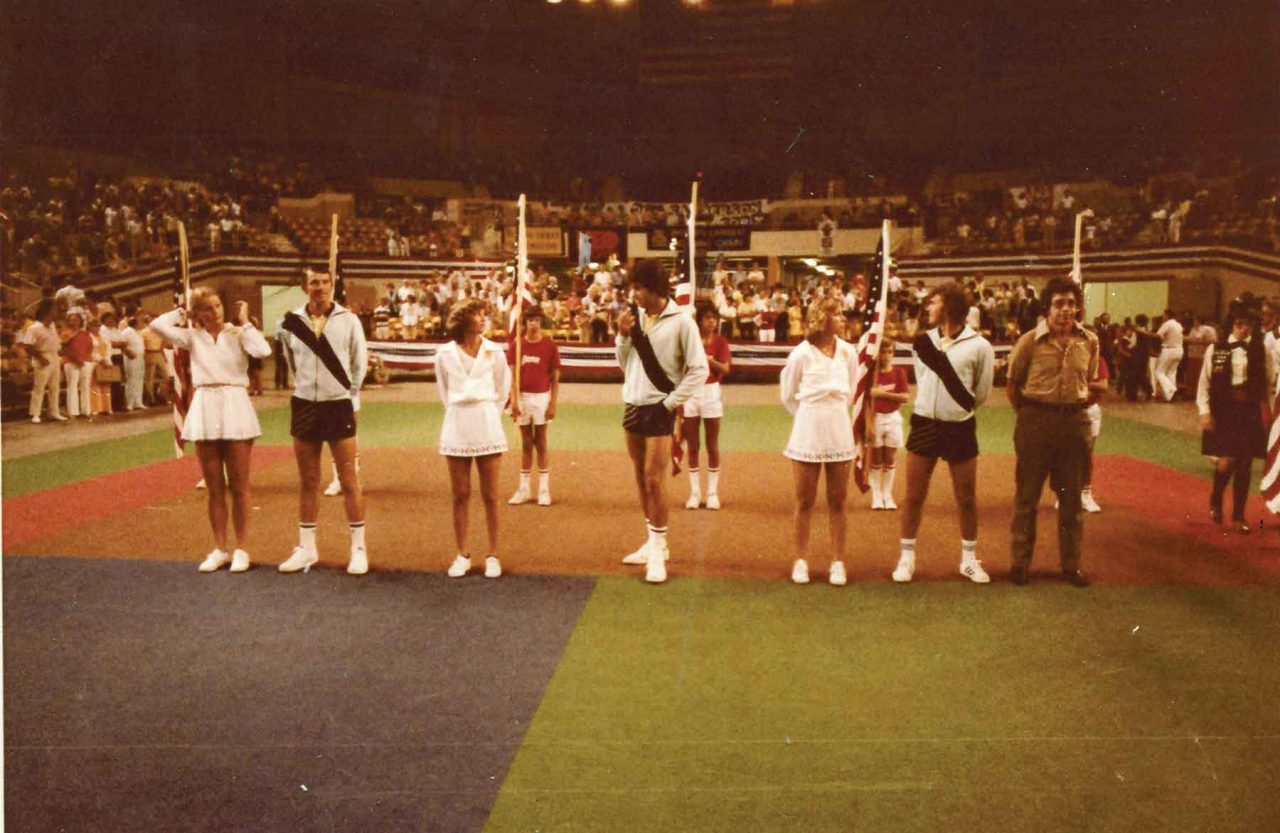 The Phoenix Racquets of World Team Tennis smashed overheads and sports barriers during their successful run in the mid-1970s.

A topspin tsunami hit America in 1974, upending tennis’ staid reputation. Swept away were all-white outfits and polite, well-behaved audiences. In its place emerged World Team Tennis, an upstart league featuring stars decked out in colorful uniforms competing in a team format before animated crowds. “People yelled and screamed at matches; they got up in the middle of play and walked out to get popcorn – it was so different from the decorum at tournaments,” player Tom Gorman told the The Oregonian in 2012. “But once you got used to it, it became fun. After playing the WTT season, I would go out and play tournaments and think, ‘God, this crowd is so boring.’”

The ’70s tennis revolution included the Phoenix Racquets, who battled WTT opponents in Veterans Memorial Coliseum. The team offered interactive clinics, zany promotions and a talented squad that included the world’s top-ranked female tennis player at the time, Chris Evert. “There was a family-type atmosphere with sellout crowds and a fun team, some of who became my best friends,” Evert says. The love affair between the Valley and the Racquets during their four-year fling reads like a tennis coming-of-age novel.

Tennis had achieved mass appeal the previous year when 29-year-old Billie Jean King beat 55-year-old Bobby Riggs in the “Battle of the Sexes” at the Houston Astrodome, viewed on television by 90 million. To capitalize on the sport’s newfound popularity, King and her husband, Larry King (the attorney, not the media titan), announced the WTT’s formation.

The co-ed league, a first in professional sports, had 16 franchises with catchy names like the Boston Lobsters and Chicago Aces. Each team was composed of three men and three women lured by a steady paycheck. The coach could be either a player or nonplayer, and teams had a 44-match schedule from late April to mid-August.

Matches consisted of one set of men’s and women’s singles, plus doubles and mixed doubles, with every game counting as a point. Female players were especially crucial to victory, due to the comparitively wide gap in talent level between the female pros in the league. The best female singles players tended to win by lopsided scores, and gave their teams an additional advantage in the mixed doubles matches, where weaker players were ruthlessly targeted. Men’s matches were typically close, as they rarely broke each other’s serves.

Though originally awarded a franchise by the WTT in 1974, Phoenix faulted on its first serve and had to sit out a season before debuting a team. Things started out well enough, when the fledgling Phoenix team selected superstar men’s champion Jimmy Connors in the league’s inaugural player draft. Unfortunately, the owners quickly flipped the team to an ownership group in Baltimore, leaving the Valley without a franchise.

Meanwhile, WTT became a cultural phenomenon, inspiring tennis buff Elton John to write a song about his friend, King. The single, “Philadelphia Freedom,” named after her WTT team that had also drafted him for publicity purposes, was released the following year and topped the charts. The Denver Racquets were the league’s inaugural champs, who with help from their mascot Airedale terrier, Topspin, beat the Freedoms in the finals.

The Denver Racquets were subsequently sold to a Phoenix group managed by insurance businessman Jimmy Walker, giving the Valley its second shot at pro tennis. Baseball player Reggie Jackson, who lived part-time in Tempe, served as the principal owner of the team and became the first African-American to hold such a position in sports management. “I think the reason Reggie got involved in tennis is that he heard Billie Jean King makes $800,000 a year. With salary and endorsements, he only makes $200,000,” Walker told The Arizona Republic.

Governor Raúl Castro proclaimed May 2, 1975, as Phoenix Racquets Day, when they hosted the New York Sets before an audience of 5,534 at the Coliseum. Although the Racquets lost, 30-21, the fans bonded with their team, at times chanting, “double, double, double” [fault] as opponents hit their second serve. After a 44-game schedule, the Racquets lost in the semifinals to the San Francisco Golden Gaters.

The following year, the Racquets signed Evert, who loved the WTT format. “It’s never lonely, and it’s better co-ed,” she told the Republic. “It’s like the difference between steak and hamburger.” Evert had a phenomenal season, winning Female Most Valuable Player and Female Rookie of the Year awards. Once again, the Racquets lost to the Golden Gaters in the semifinals.

“Evert was kind, encouraging to her teammates, and worked hard at her game,” says teammate Brian Cheney, who was also the pro at Camelback Village Racquet Club. He recalls Evert taking on Mike Poulos, the owner of the Old Spaghetti Factory, in a four-point exhibition during intermission. “If Chris won every point, those in attendance would get a free dinner at his restaurant,” Cheney says. “Mike had taken lessons from me and had a hard serve, but Chris won the bet.”

Cheney’s WTT highlights include beating Björn Borg in doubles, driving a complimentary AMC Pacer during the four-month season, and becoming the Racquets’ player-coach, which included many unforeseen tasks. “During play, [Racquet] Butch Walts had the zipper break on his shorts,” Cheney says. “He didn’t have another pair, so fortunately I had some safety pins in my tennis bag that kept him in the match.”

The Racquets were a close-knit team and cranked Fleetwood Mac while traveling, Cheney says. One teammate, Dean Martin Jr., left mid-season to star with Ali MacGraw in the tennis movie Players. Martin died a decade later when he crashed while flying an F-4 Phantom in the California National Guard.

Phoenix made it to the WTT championship in 1977, a best-of-three series with the first match held in New York, the second in Phoenix. They lost to the New York Apples before 11,300, some of whom arrived on the Racquets’ “Love Bus.” The Racquets’ euphoric team owner envisioned big things for his team and the league. An enthusiastic Walker said, “In 1987, I see the Racquets having breakfast at L.A. International [Airport], boarding an SST to Tokyo or Rome or Paris, playing two or three matches in different countries and being back in Phoenix for a weekend home game.”

But the league folded in 1979 due to lagging attendance elsewhere in the country. A scaled-back version was relaunched in 1981, which included the Phoenix Sunsets for one year before folding. The league still operates, but its popularity and influence are minor compared to 1974, when its advent shook the sports world.

Gilbert resident Anne Guerrant, who partnered with King to become the No. 1 WTT women’s doubles team for the New York Sets in 1975, says the league’s unique format elevated the sport for fans and players.

“The short sets created more interesting tennis; you had to pay attention to each point,” Guerrant says. “We should adopt it for all play, it’s so much more exciting!”