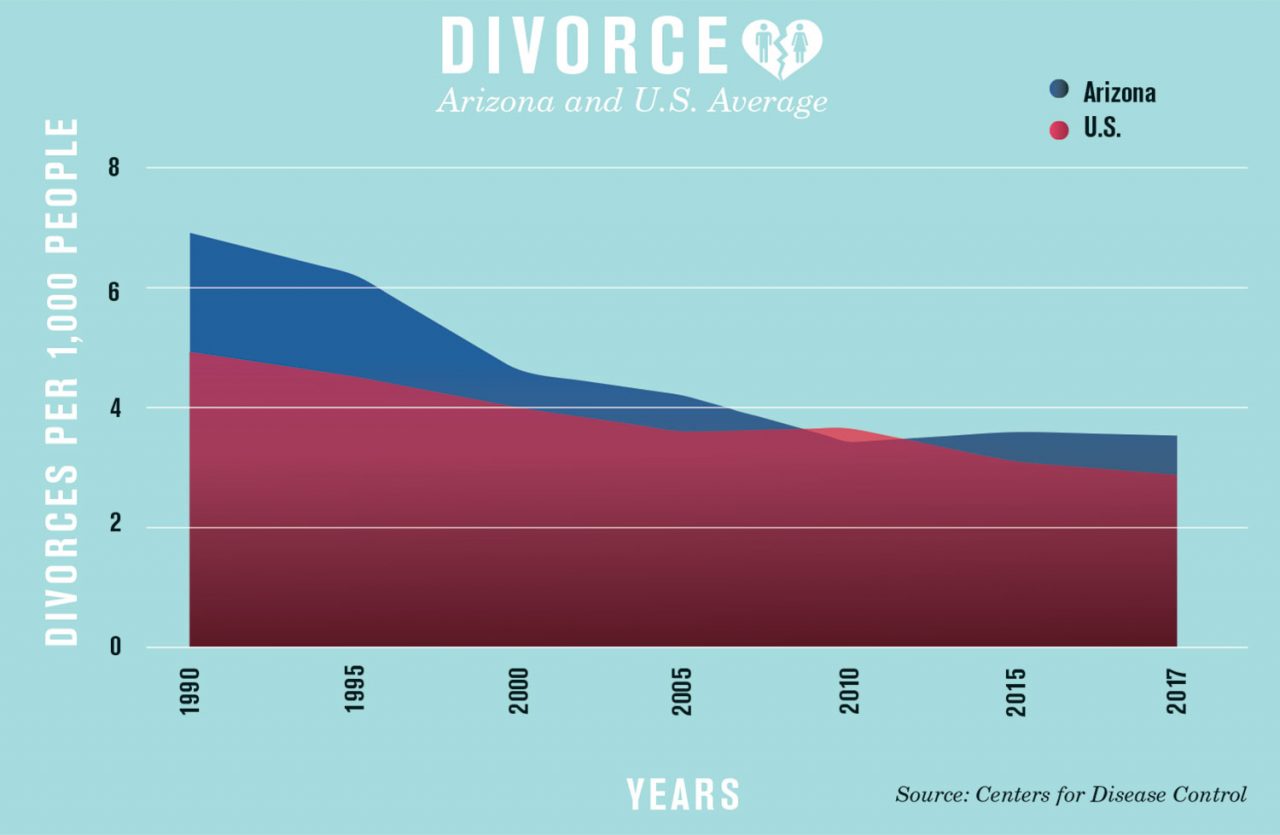 Arizonans still divorce each other more than the national average, but recent data shows the trend reversing. Are our days as a breakup haven numbered?

You don’t need to watch Crazy, Stupid, Love to know that marriage is tough – no matter which state you call home. But if you put stock in recent federal data, Arizona couples are figuring out the secret to marital longevity quicker than most.

According to data from the Centers for Disease Control, divorces in the U.S. peaked around 1980, when 40 percent of all marriages were expected to end in divorce. They have continued to decline ever since – today, the annual rate is down 1.9 percent nationally. But the same trend, analyzed by PHOENIX, is even more pronounced in Arizona, where the rate of divorce decreased by 3.4 percentage points in the same timespan, at nearly twice the speed it decreased nationally.

So even though Arizonans got divorced at a pretty high rate in 2017 (the state had the 11th highest number of divorces per capita), the downward trajectory of divorces is trending favorably vis-à-vis the rest of the country – in fact, the divorce rate here was actually less than that of the national rate in 2010, making Arizona, for the first time, a marriage-friendly state.

Explaining Arizona’s divorce decrease is a bit trickier. The first marker researchers look at when they see a wild decrease in the divorce rate is the marriage rate – after all, more marriages will inevitably beget more divorces. But Arizona squares with national trends. From 1990 to 2017, the marriage rate across the U.S. decreased by about 4.2 percent, and Arizona mirrored that statistic.

Elizabeth Westby, a divorce attorney at Platt & Westby in Scottsdale, cites other factors. Finances have likely played a large part in the decrease in divorce in Arizona, she says, because when a state isn’t doing well economically, there’s a drop in divorces. It’s why so few people got divorced in the aftermath of the Great Recession in 2008, Westby says.

Sure enough, the divorce rate (see graph) has stabilized in Arizona since the beginning of the economic recovery in 2011 – suggesting that estranged couples are less inhibited by finances. The steep pre-Recessionary decline in Arizona divorce rates over three decades may be due to demographics, as the state’s population growth and status as a retirement destination led to an increase in millennials and baby boomer retirees – neither of whom are likely to marry or divorce.

“There are a lot of millennials here [in Arizona] who are in the traditional age bracket to get married, but they’re not getting married,” Westby says. She adds that those who do marry are not particularly good at marriage, divorcing at rates that often exceed those of previous generations. According to a study out of Pew Research Center, for every 1,000 married people younger than 50, about 20 will divorce annually – twice as high as the rate for adults 50 and older.

“I don’t know what the future holds, but I think those are some of the clues as to why Arizona just doesn’t fit the regular bill or the projection for the rest of the country,” Westby says.

TRUTH OR LIE?
The internet is full of half-truths and full-on lies about weddings, marriages and divorces. Can you tell which of these marriage trends is a fact or fiction?

• Half of all marriages end in divorce.  False

• Weddings in Arizona cost less on average than the U.S. median. True

• Marrying at a young age decreases your risk of divorce. False

• Living together before you get married increases the likelihood you’ll divorce. False