It’s been three years since serial restaurateur and Tempe homeboy Aaron Chamberlin (Phoenix Public Market Café, Taco Chelo) first told me he wanted to open a Southwestern restaurant in the Southeast Valley, an idea that struck me at the time as rather quaint. That once-influential regional cuisine of the ’80s and ’90s was dead – wasn’t it? And those of us who’d been subjected to many a tortured version of it (Choco Tacos, anyone?) weren’t exactly mourning the loss. Even Vincent Guerithault, the granddaddy of Southwestern cuisine here in Phoenix, had seen the prudence in paring it down on his menu (keeping a duck tamale here, a smoked salmon quesadilla there) and beefing up his classic French offerings to stay attuned to the times. 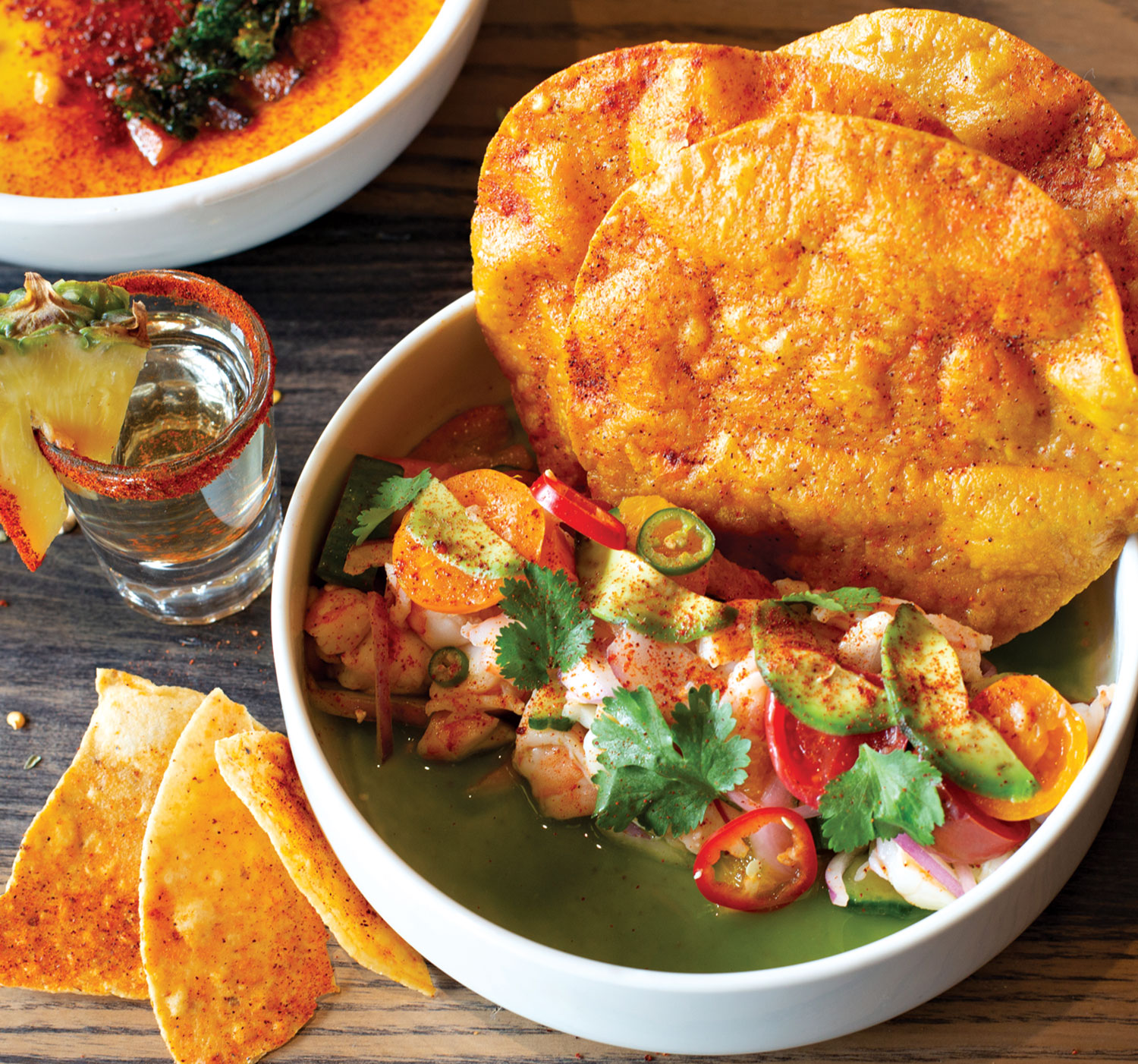 But Chamberlin, a prolific idea guy, clearly doesn’t view the style as the effete hybridization of Southwestern ingredients and French technique it so often became in the old days. For him, it is (or at least can be) a down-to-earth fusion of regional ingredients and cooking styles ranging from Colorado to Mexico and from Texas to Baja. He brought that vision to fruition late last summer, opening Ghost Ranch at the buzzy food corner of Rural and Warner roads in Tempe, and the result is a restaurant that simply but eloquently captures the breadth and sincerity of this almost forgotten genre.

Named for the New Mexico ranch where artist Georgia O’Keeffe spent her summers roaming and painting, Ghost Ranch looks vaguely New Mexican without resorting to howling coyote kitsch. Designed by Chamberlin’s longtime friend and sometime partner Gennaro Garcia, it’s an inviting room that miraculously evokes the wide open spaces of the Southwest. The bar is a good place to settle in over creative cocktails (maybe a Piña Picante, made with jalapeño-infused tequila) and an order of warm, crispy chips with chunky, hand-crushed guacamole and two mild-ish but effective salsas: one chile red, the other tomatillo green.

Chamberlin, who hung up his chef guns a few years ago to start building his restaurant empire, has put cousins Rene Andrade and Roberto Centeno, who both worked for Beau MacMillan at Elements, in charge of the kitchen, and they do a wonderful job, particularly in elevating Mexican standards. For example, their ceviche (really an aguachile, ceviche’s spicier cousin) is gorgeous – a juicy, perfectly balanced mélange of shrimp, lime and serrano chile topped with a pretty assemblage of avocado, orange, radish and cilantro. Also terrific: queso fundido, a gooey melt of cheeses mixed with moist clumps of chorizo and pico de gallo. I’d pay 10 bucks for the accompanying corn tortillas alone – thick, pliant and brimming with corn flavor. Velvety pumpkin soup, chunky with caramelized squash and tiny soft-crisp orbs of masa, is rich and naturally sweet on one occasion, a bit more diluted and pallid on another. It would be a favorite, too, if it were consistent. 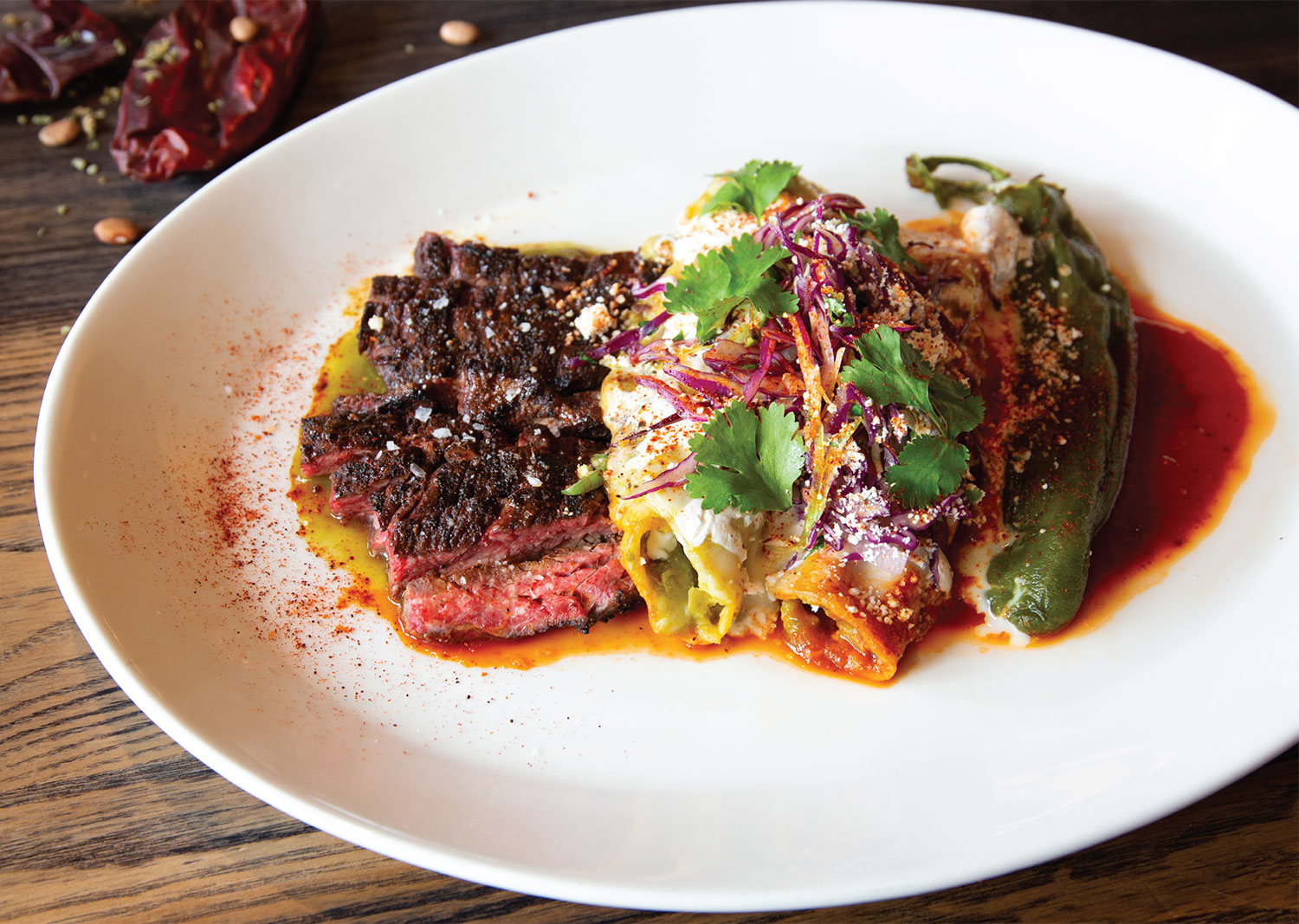 Taco platters come in three options: mesquite-grilled swordfish from Chula Seafood, grilled flank steak or a combo of chile Colorado, braised pork and Chimayo chile. It’s flank steak for me, pink and perfect and infused with the smoke of the grill. The platter also includes more handmade tortillas, guacamole, salsas and ranchero beans, creamier and dreamier on an earlier visit. That said, I would order this utterly satisfying dish again – which is not true for the sampler platter of grilled skirt steak, crispy enchiladas (one pork, one chicken) and a tame, cheese-filled chile relleno. It smacks of tourist food.

House specialties are so named for good reason. A steamed Chimayo chile stuffed with buttery mushroom duxelles (minced mushrooms cooked nearly to a paste) and tangy goat cheese sauce, its contents gently gushing under my fork, recalls the elegance of Manhattan Beach’s St. Estephe, where Chamberlin once worked under Southwestern guru John Sedlar. Littered with crisp-fried leeks, it’s one of the best things on the menu, although I do have a soft spot for the Aztec cake, too – a cheesy, oozy stack of tortillas, pulled chicken, sweet corn and roasted green chile. Mexican lasagna, essentially. 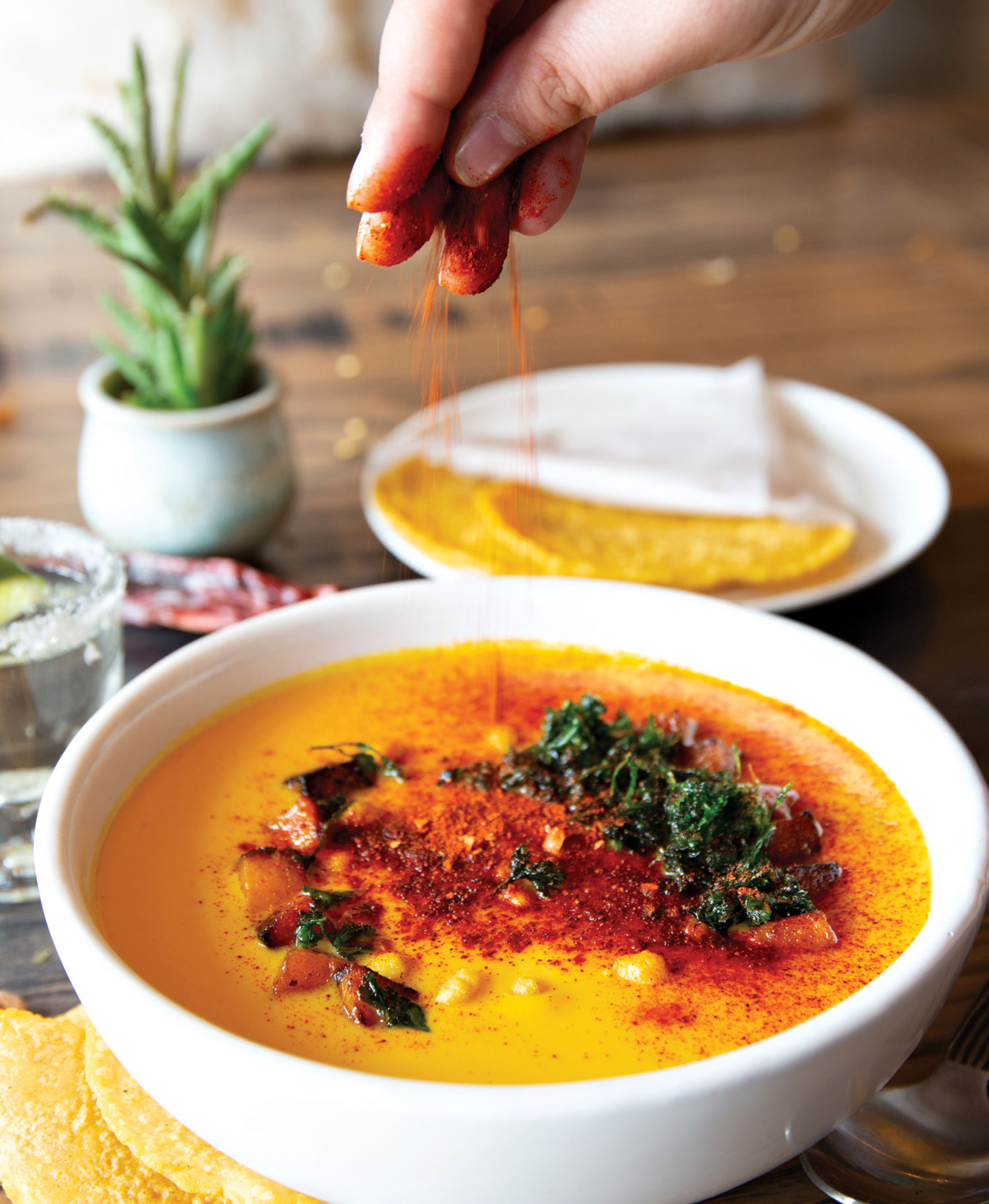 The brunch menu offers up additional favorites. Chile Colorado chilaquiles are basically breakfast nachos, smoothed in earthy pork chile sauce, then jacked up with melty Oaxaca cheese, avocado, streaks of crema and a runny fried egg. It’s a primo hangover dish. Meanwhile, a thick, puffy blue corn pancake, drizzled with honey and sprinkled with toasted pepitas and dehydrated corn, offers up the best of both worlds – savory breakfast and sweet dessert. I adore it. As for real dessert, there’s a fudgy, chile-infused chocolate cake, matched with coconut gelato, cocoa nibs and a smear of avocado-lime sauce, that follows the same precept by being both unexpected and savory-sweet.

Thanks to Ghost Ranch, I’ve changed my mind about Southwestern cuisine. It’s not some historical artifact to be set on a shelf, but rather an essential part of our evolving food culture. Kudos to Chamberlin and crew for giving it the respected place it deserves in the present. 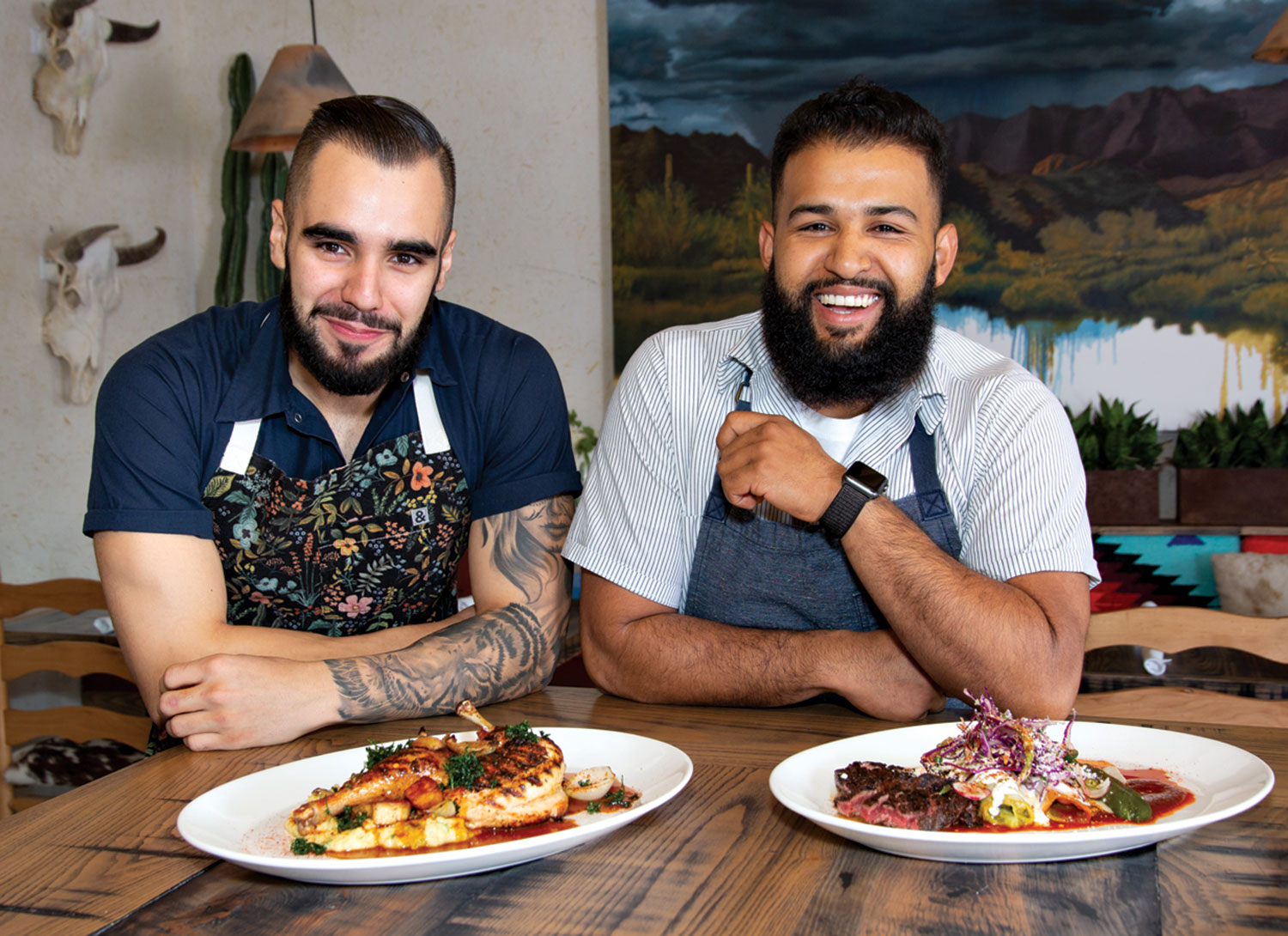 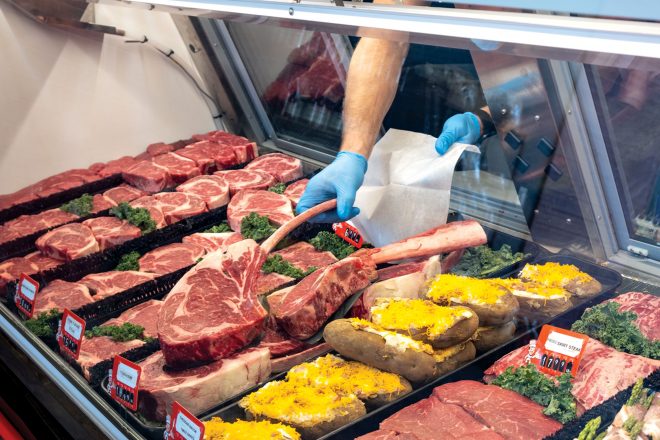 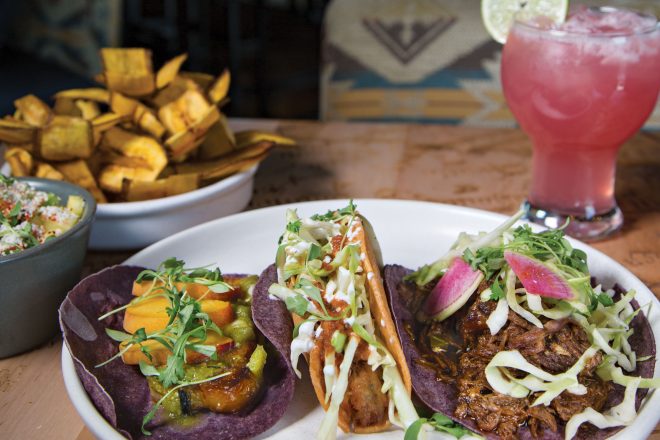