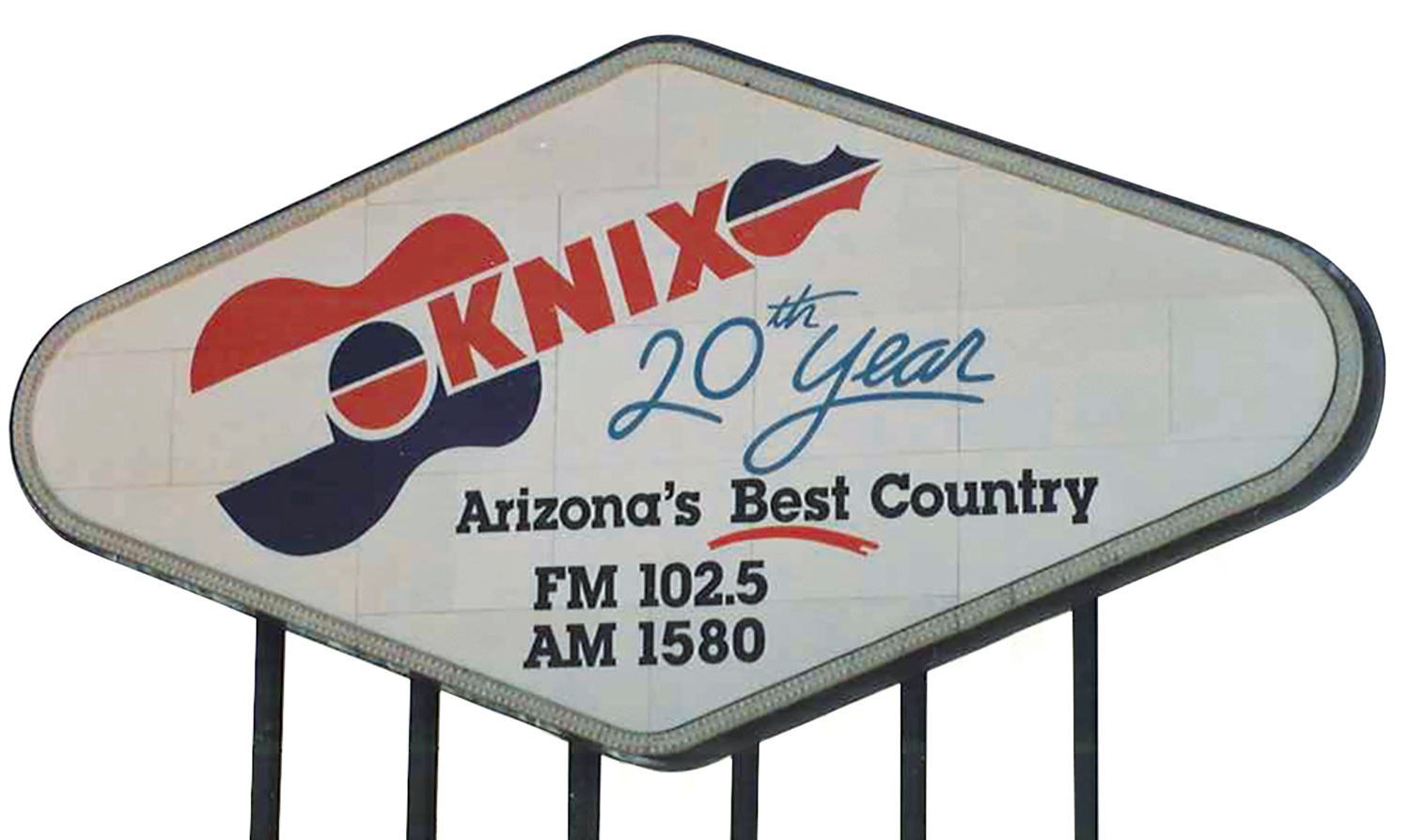 Country music powerhouse KNIX has a secret: The craziness in the broadcast booth ratchets up when the mics are off. It goes well beyond mere off-air banter, according to disc jockey Tim Hattrick. He recalls enlivening a sales meeting with 50 pot-bellied pigs borrowed from Hickman’s Farms, released into the plush conference room. “If you think pigs squeal when they’re running around, wait until you try to pick one up,” he says, laughing.

While such shenanigans might elicit a chilly meeting with HR at other companies, KNIX has long been on the cutting edge in promoting its brand. Creative marketing, along with a legendary esprit de corps among staff, were vital in propelling the station to national fame. “A lot of the major Nashville recording artists knew they made it in the industry when KNIX added them to the song mix,” Jim West, a former KNIX disc jockey, says. “That’s how influential the radio station was to country music.” KNIX’s 50-year evolution from hayseed to the big time, however, didn’t happen without some static.

KNIX 102.5-FM, whose call letters are derived from “PhoeNIX,” was started in 1968 by country superstar Buck Owens, father of the twangy “Bakersfield Sound” (a raw, honky tonk-inspired country genre that came out of Bakersfield, California, in the 1950s) that led to 21 No. 1 hits, and who co-hosted the TV show Hee Haw. KNIX broadcast from a Tempe studio it shared with sister station KTUF-AM, which Owens had bought in 1965. 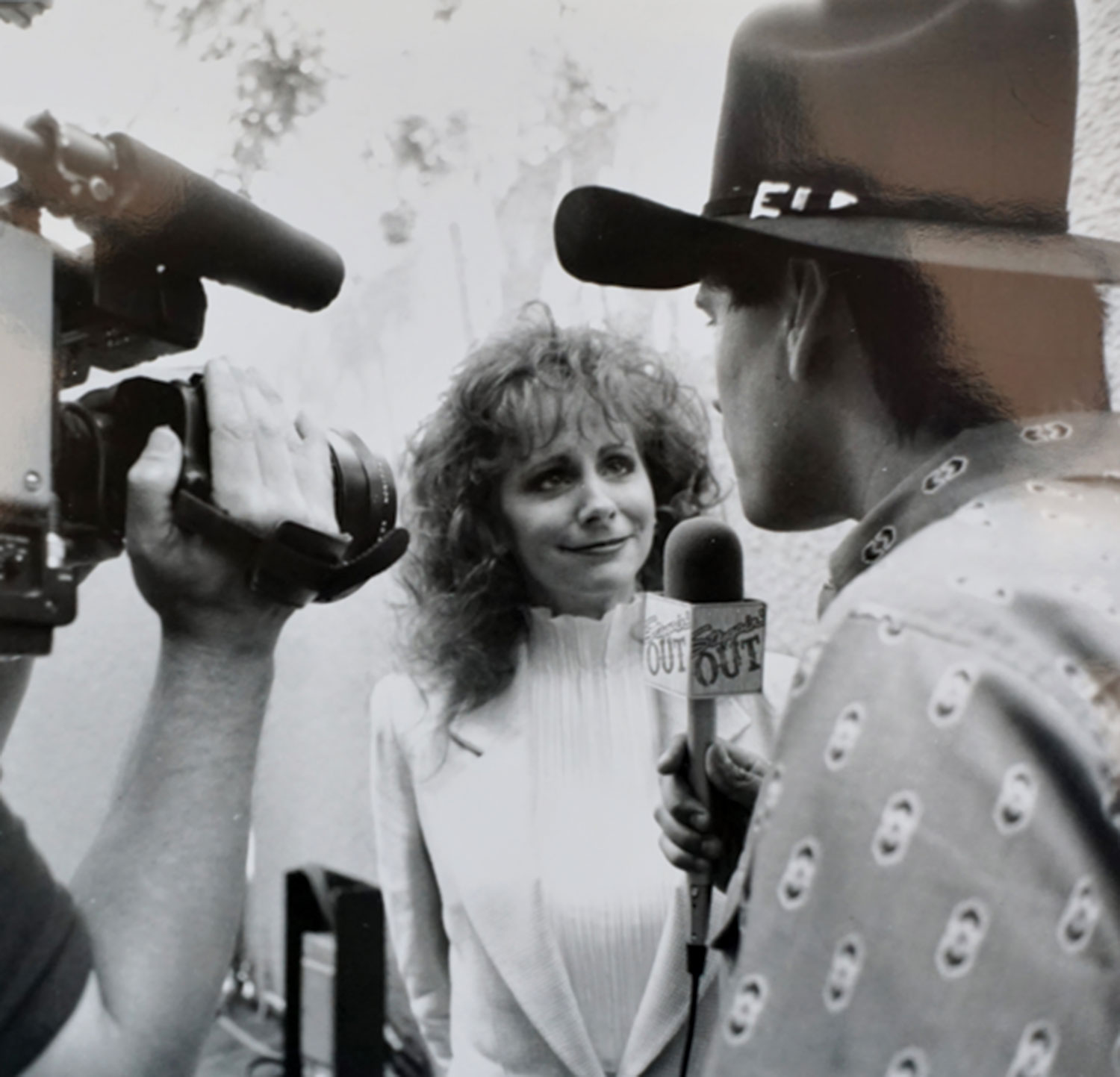 Among the station’s earliest listeners were some who tuned in unwillingly. “The first time I made a call at work, all I could hear was country music over the phone lines thanks to our adjacent 50,000-watt AM transmitter,” says Michael Owens, Buck’s son, who became the station’s general manager in 1978. “We received complaints from… a half-mile away.”

KNIX was slow to grow. Buck and Michael Owens had different opinions about how to improve. “I was big into researching what people liked to hear; he followed his gut instincts,” Michael says. “Once on an airplane, a flight attendant asked us if we were fighting. I told her no, that’s just how we discussed things.”

Former KNIX DJ W. Steven Martin also squabbled with Buck Owens. “There was a lot of pressure to play the Bakersfield artists,” he says. “I disagreed, and they fired me.” When they dropped Martin, the ratings followed. “When I went back the second time, we had incredible ratings, and everyone left me alone.”

KNIX hired top on-air talent thanks to program manager Larry Daniels’ research. “Larry would travel to other cities and sit in a motel room listening to the radio,” West says. “He recruited me after hearing my 7 p.m. to midnight show in Tucson.” 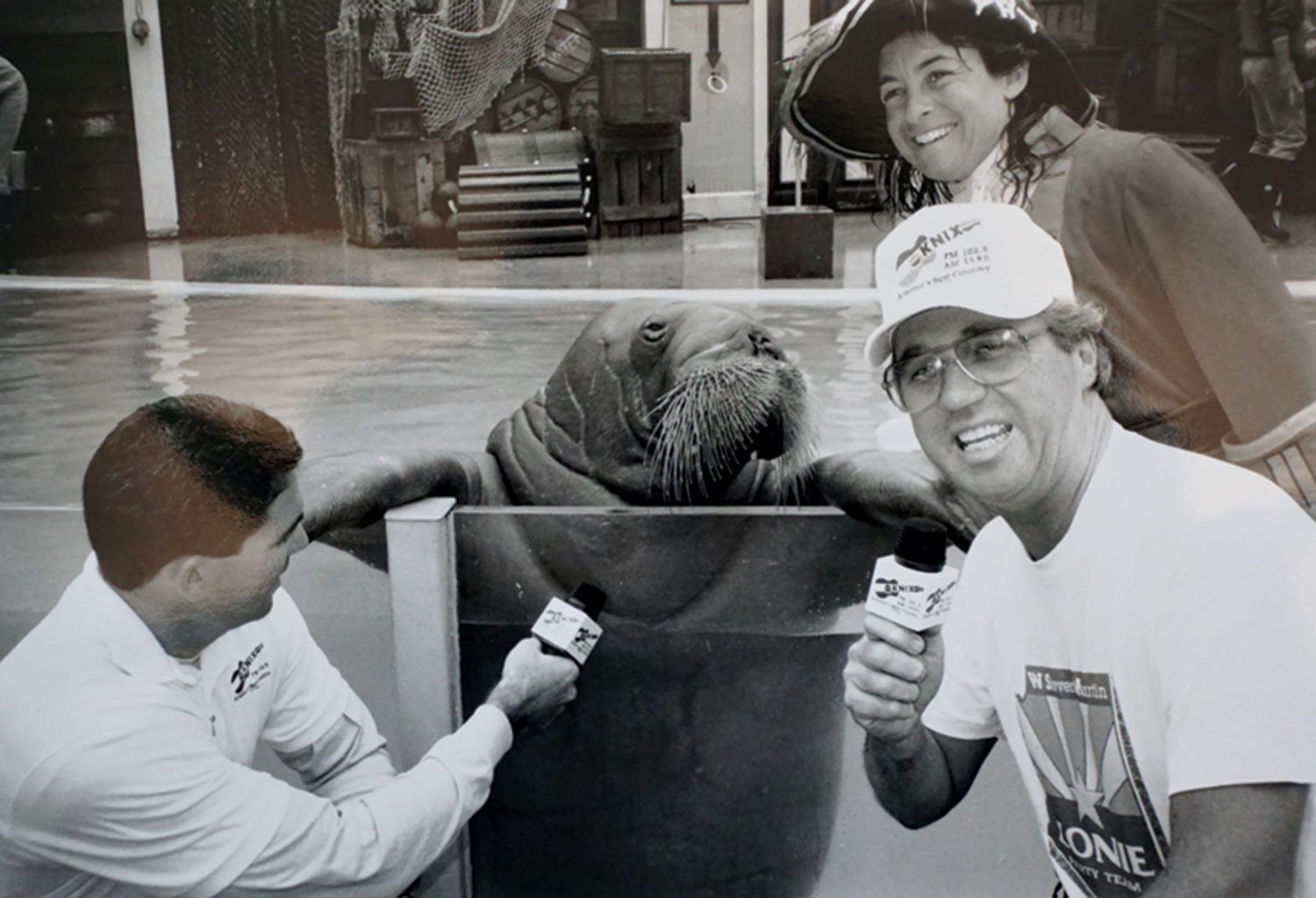 The station’s mix of music, staff and TV ads featuring rising country stars finally bucked KNIX to the top of the local airwaves in 1980, a position it held for the next decade. The KNIX FM/AM combination was the top-rated Nielsen (then Arbitron) station in the 25-54 market for the next 10 consecutive years, except for one rating period when it peaked at No. 25. “KNIX was a magical place to work. There was something special in the air there,” West says. “I’ve never worked any other place that was as cohesive and tight.”

Still, Michael Owens challenged his staff to do better, and promised to build them a swimming pool at the station if their market share improved. KNIX achieved the goal, but Owens discovered that insurance wouldn’t cover the pool. “We considered a Jacuzzi, but thought that would bring a lot of divorces,” he told Country Airplay Monitor. Instead, Owens had a gym built and hired a full-time trainer.

With the station flying high, KNIX hosted an epic two-day concert called Country Jam ’89 at Estrella Mountain Ranch. More than 150,000 fans attended the free, Woodstock-like event with local and national artists. “It was the first mega outdoor concert in Arizona,” Martin says. “Charles Keating wanted exposure for his new development, and we wanted a free venue. People will come if you build it and leave beer bottles behind.” 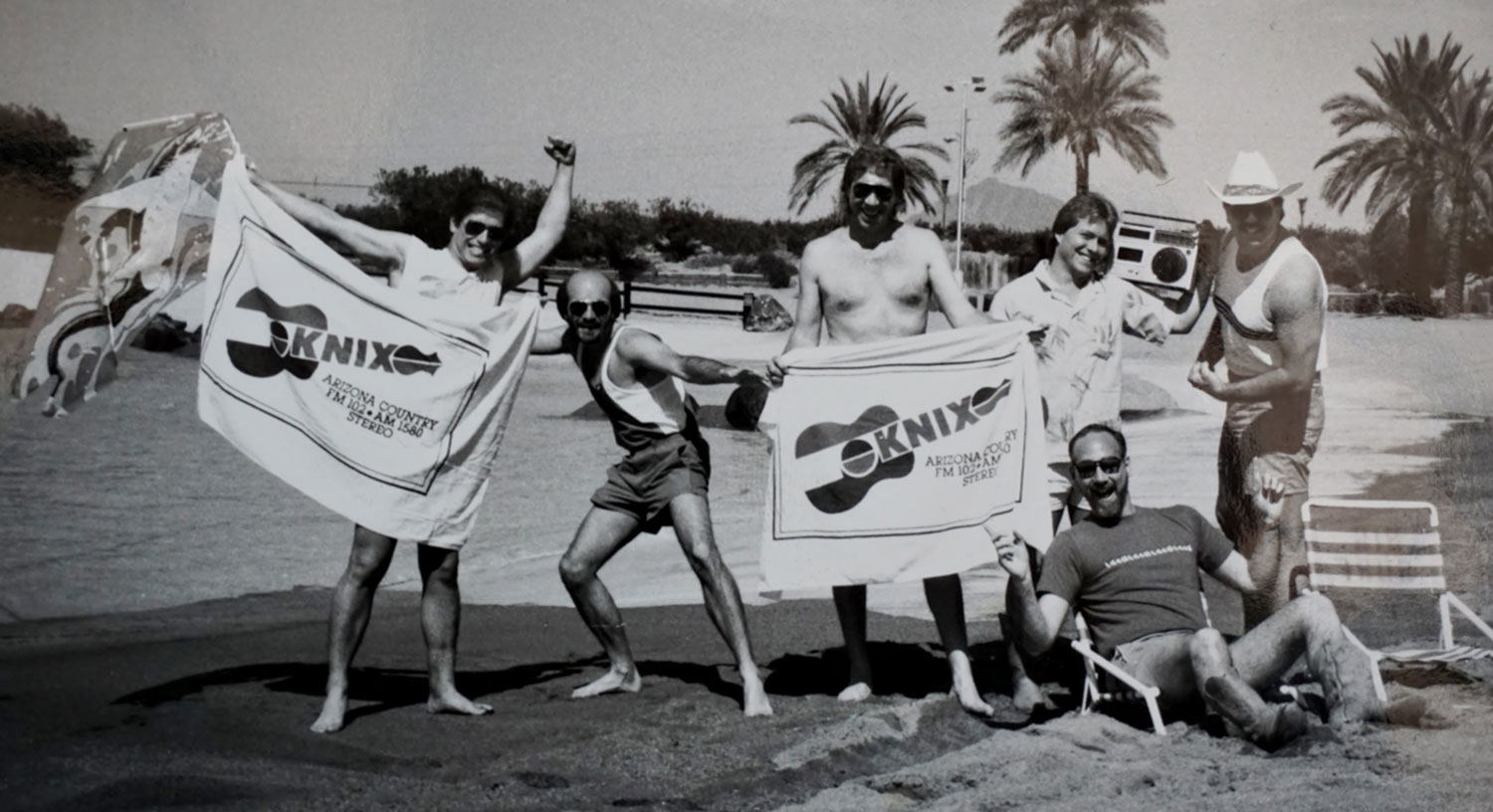 KNIX staff promoted the station with events such as Dolly Parton look-alike contests and the “Taco Bell of Love” held on Valentine’s Day in 1997. “We actually wed 10 couples that morning at the Taco Bell at Tatum and Shea,” Vicki Fiorelli-Starkovich, former KNIX director of marketing, says. “Couples were married at the drive-thru window by a pastor. Then they parked, signed their license, had their first dance, and enjoyed a three-tiered cake.”

The station’s gimmicks sometimes brought unexpected reactions from loyal fans. Marshall Trimble, Arizona’s state historian, worked for the station as a storyteller. Trimble recalls being interviewed by KNIX’s Sandy Lovejoy at the TEXAZ Grill in 1987 when he suddenly felt a sharp pinch on the butt. “I slowly looked around, and there was [then Arizona Secretary of State] Rose Mofford flashing a big, mischievous grin.”

“I’ve wanted to do that for a long time,” the governor told him.

KNIX’s current owner, iHeartMedia, acquired it in 1999 after deregulation allowed ownership of multiple stations in a single market. “Rather than go into debt to buy other radio stations to remain competitive, it seemed better to sell,” Michael Owens says. 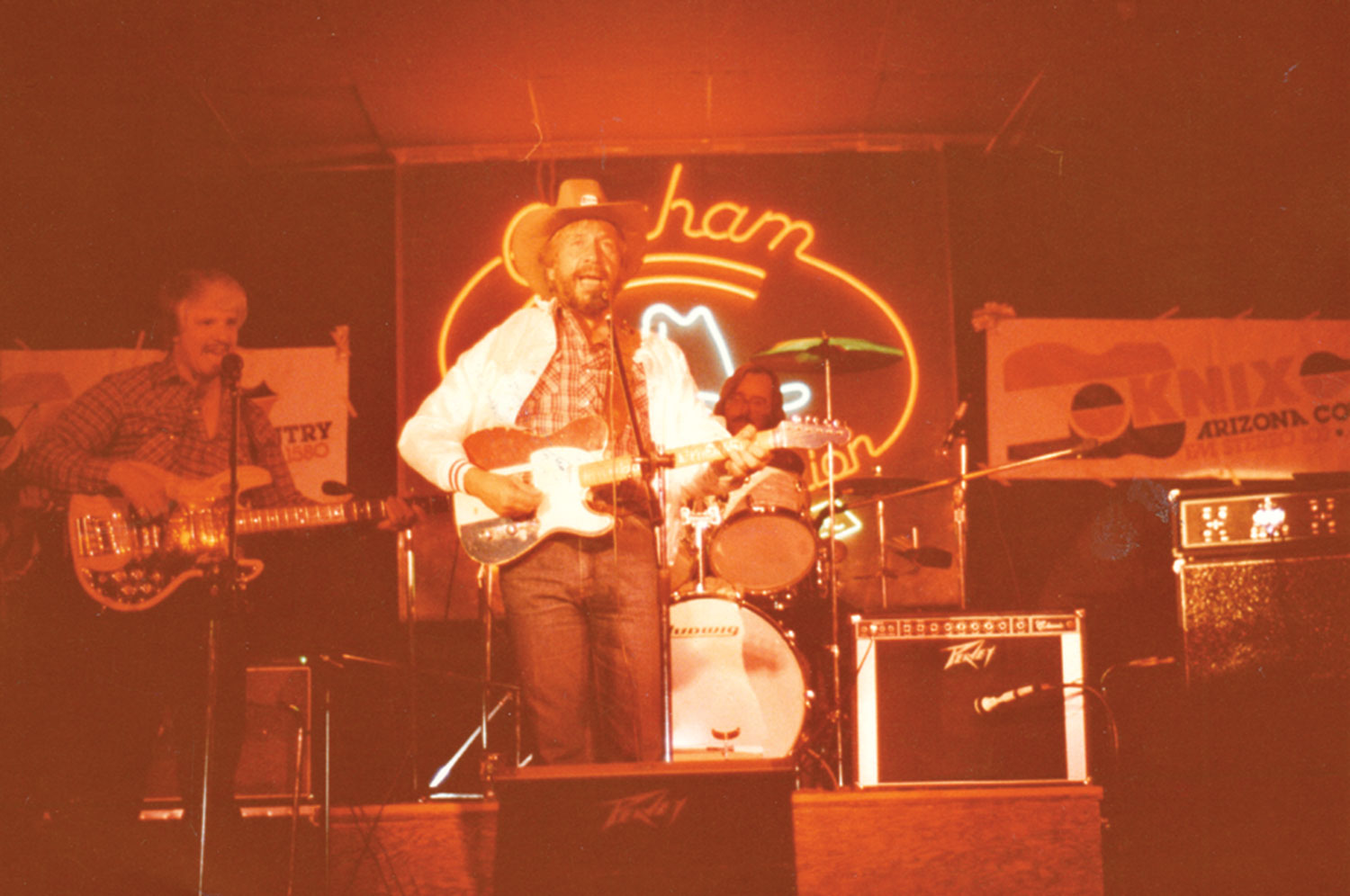 The good times, anything-goes attitude has continued at KNIX, according to Hattrick, who came to the station for a decade from a competitor during his Tim & Willy days in 1998, and returned in 2017. Some fans were slow to warm up to the duo, especially a listener named Marge in Laveen.

“To win her over, we broadcast live from her farm and shoveled horse manure,” he says. “Marge went from being disgruntled to gruntled.”

Commercial Exposure
Many legendary country artists starred, pro bono, in KNIX TV commercials early in their careers. The station encouraged them to be themselves and have fun. Former station music director Buddy Owens (Buck’s son) says that they were all wonderful people, and has the following reminiscences:

Alabama – “Three of them were cousins, and their harmonies reflected it.”

Brooks & Dunn – “Brooks had the personality; Dunn had the voice.”

Clint Black – “He was the funniest guy. We spent two hours laughing over lunch.”

Garth Brooks – “He teased KNIX staff about once hanging up on him because of a bad phone connection.”

George Strait – “He said in our commercial, ‘If you’re going to listen to country music in Phoenix, it has to be KNIX.’”

Reba McEntire – “Lovely and giggly like the girl next door, even after her success.”

Shania Twain – “We were bummed that she nailed the commercial in one take because we didn’t want to see her go.”

The Judds – “Naomi was smart and friendly; Wynonna seemed a little awkward, but that disappeared once the filming started.”