The inspiration for the sweet but surprisingly candid comedy-drama “Instant Family,“ starring Mark Wahlberg and Rose Byrne, was the real-life experience of Sean Anders, the director and co-writer. Anders become a father of three all at once in 2012, when he and his wife Beth, a former flight attendant and teacher, fostered three sibling children, then adopted them a year later.

A Wisconsin native, Anders moved to the Valley in 1996 and lived here for about a decade; his first feature, the low-budget comedy Never Been Thawed, was shot here, and premiered at Harkins Valley Art in 2005. He’s 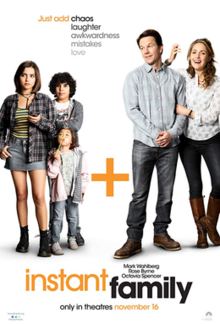 moved on to broad, big-budget Hollywood comedies like Horrible Bosses 2 and Daddy’s Home. I recently sat down with him to chat about this more personal project:

PM: So we know where the idea for this movie came from. How did these circumstances arise in your life?

Sean Anders: It was exactly like in the movie. My wife and I, for years, had been talking about whether we were going to have kids, and for the longest time I just didn’t make very much money, and I didn’t feel financially sound enough to have kids. And then when my career started to come on line a little bit we started to have the conversation again, and I said you know, I just feel like I’m gonna be one of those old dads, and I just made this joke of, why don’t we just adopt a five-year-old, and it’ll be like I got crackin’ five years ago? I was totally kidding, and my wife took it semi-seriously, and started to look into it, and we wound up at an orientation, and that’s how all this got going.

SA: Well, I don’t have biological kids, so I don’t have a frame of reference, but I would say that some differences are that there’s definitely a harder adjustment, I think, with foster adoption, because you are dealing with kids who are dealing with some level of trauma and tragedy from where they come from. They don’t get in the system because everything’s hunky-dory. The other thing is, I feel like people want to put the difficulty of the transition, a lot of times, all on the tumultuous past of the kids, when the reality is, you put any group of people together who don’t know each other, and stick ‘em in a house together and expect them to act like a family, there’s going to be some growing pains. You know? It’s not all about where they come from; a lot of it is about the baggage you bring into it as a parent. The title is Instant Family. You really do become a family, or at least an acting family, in an instant, and then you become a real family over time. You get that time to fall in love with your kids. That’s another thing that’s different from biological families, who just feel this overwhelming sense of love the minute that child comes into existence. For most foster adoptive families, you’re dealing with strangers, and you all have to fall in love and coalesce and become a family. That’s a difficult thing, but it’s a really wonderful thing.

PM: How much of the movie was drawn from your own experiences or those of people you know?

SA: Almost everything was drawn from people I either knew or got to know. I met families along the way, and of course I had my own family to draw from, but when [co-screenwriter] John [Morris] and I started writing the script, we sat down with a bunch of adoptive families and heard their stories. The hardest part was to sort of boil it down to one story, because every adoption story is different; no two are the same, and they’re all pretty compelling. It was really difficult to throw out certain pieces we had heard and wanted to incorporate. That part was really difficult.

PM: Did you come to find, maybe through the perspective of your co-writer John Morris, that much of the experience of raising adopted kids isn’t that different from raising biological kids?

SA: I think that’s why audiences who don’t have any experience with foster care or adoption are responding to the movie, because ultimately the movie’s just about family, and about parenting. And that’s deliberate. As we were working on it, we didn’t want to make just this insider’s tale of something nobody’s going to relate to. My family was born in a different way, but we feel like the most boring, regular family. There’s nothing that special about us as a family. I think there’s a lot of reality in that relatability…[The late screenwriter/director] John Hughes is my hero; the tip-top for me. Pretty early in my career I got this amazing opportunity to spend about two hours on the phone with John Hughes. And one of the things he taught me that day was, he said, it’s not the size of the laugh, it’s how that laugh makes you feel. What he went on to say was if you can engage the audience emotionally, and make them really care and make them feel for a character in a moment, and then turn that into a laugh, you get a laugh that just feels great. I’ve tried to apply that in everything we do, but never have we had such an opportunity for that as we have in this movie.