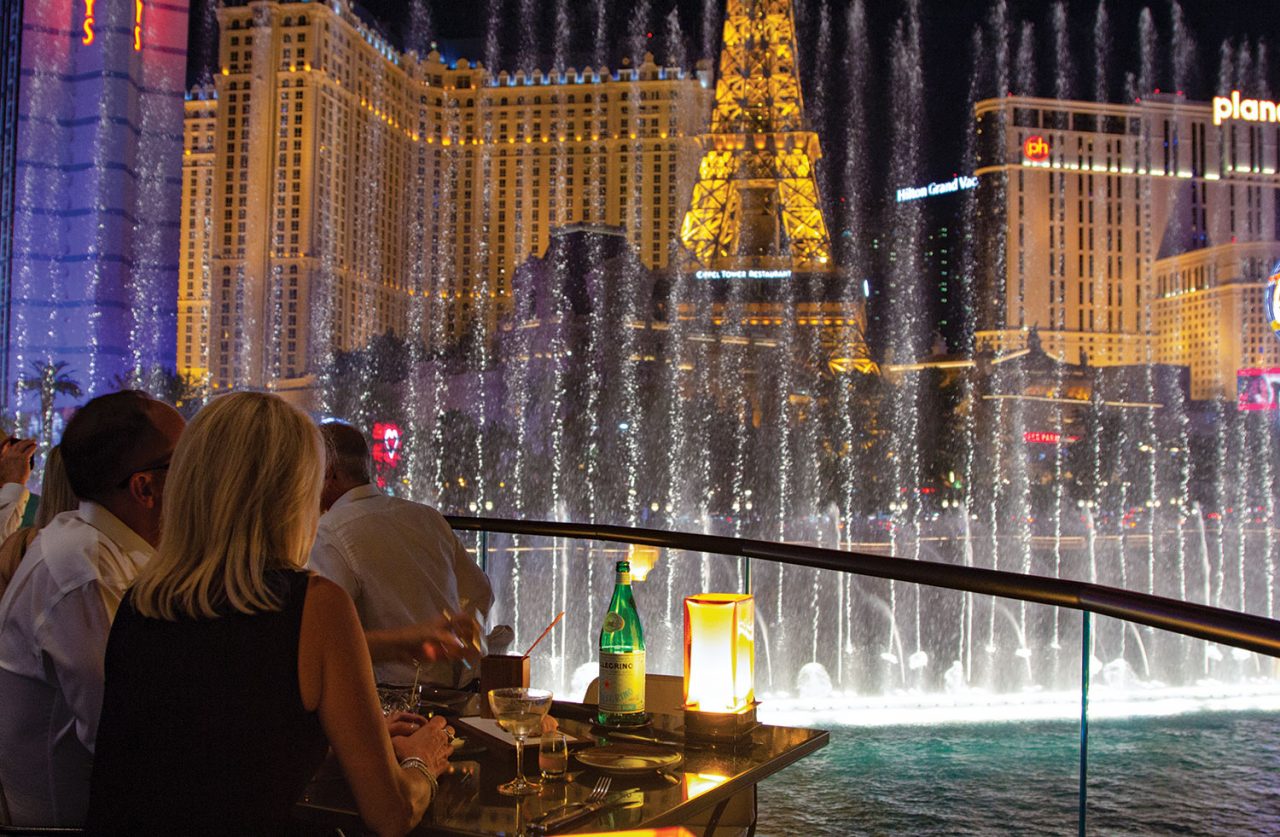 Leave your casino loyalty card at home. It’s time to find some fresh thrills in Vegas.

It’s Vegas, so my memory is foggy, but I’ve been in this theater before, and I’ve seen this variety show. Well, not this show, but one very similar – a bit raunchy, a lot hilarious, starring a fatuous, WASP-y impresario and a lively cast of alternative-circus types, with a live rock band. There were tap-dancers in that one. There’s a smarmy sword-swallower in this one.

And that’s Vegas for you: It’s mercury, always changing, always shifting. Sometimes the changes are big, like a new resort, but usually they’re discreet and surface-deep – one restaurant disappears, another appears. A show rewrites the ending. All the better to keep us coming back.

And those of us who love Vegas inevitably do come back. So here’s a year-end checklist of new wrinkles to check out in this notorious skin-peel of a city. 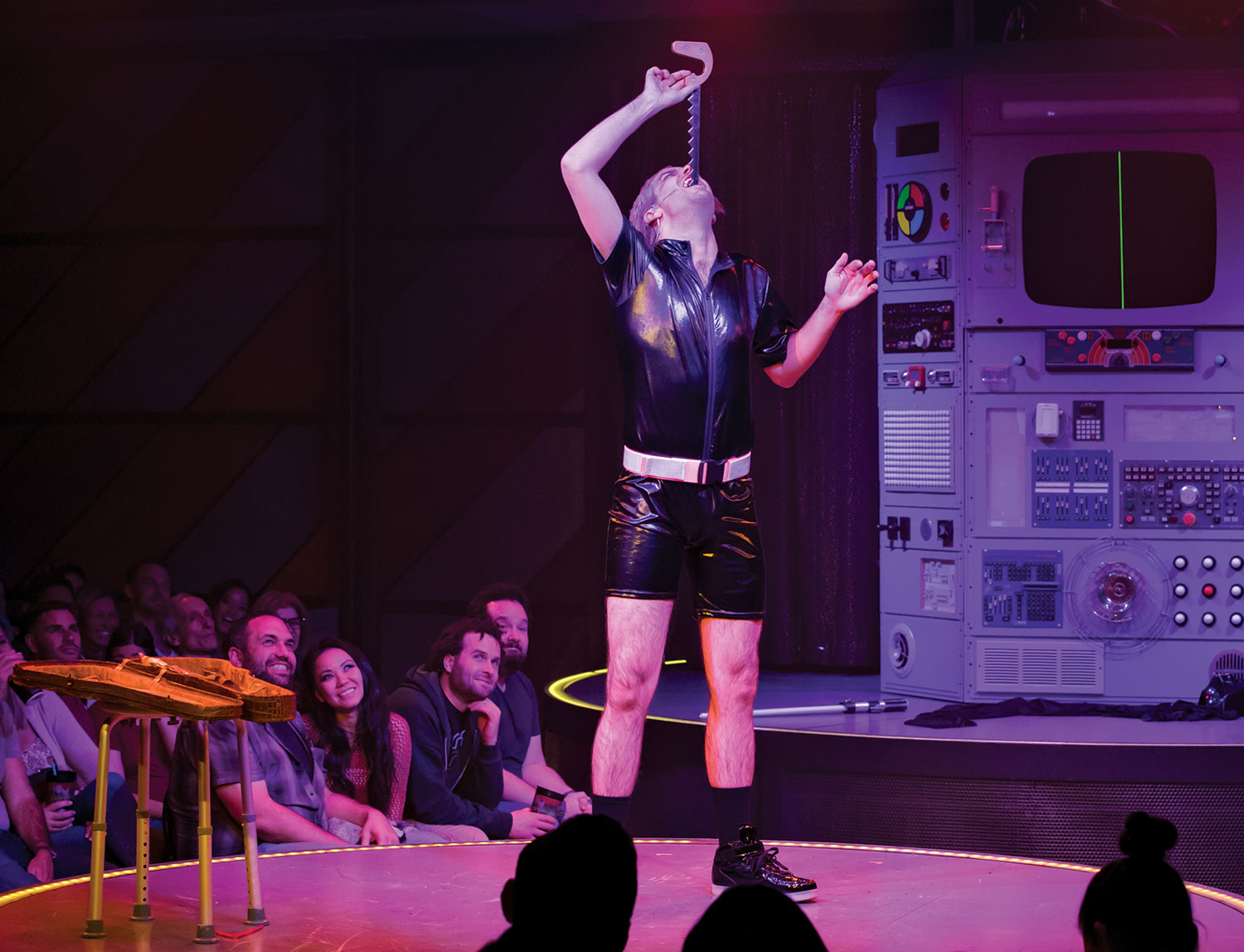 Resorts
Like everything else in America, and the Southwest in particular, the pace of growth in Las Vegas slowed during the Great Recession. Now the Strip appears to be on an expansion kick again – nothing like the torrid late 1990s, when seven resorts opened rat-tat-tat in a single four-year period, but momentum nonetheless.

Following the 2014 opening of the SLS Las Vegas – a head-to-toe rebrand of the iconic Sahara Hotel and Casino on the Strip’s less-tony north end – the latest addition to Vegas’ hospitality scene is the Park MGM (3770 S. Las Vegas Blvd., 702-730-7777, parkmgm.com), located across the street from the MGM Grand Resort mothership on the south end of the Strip. Inspired by an MGM executive’s visit to the NoMad New York boutique hotel, the Park doesn’t feel like a Vegas casino when you pass under the porte-cochère –more like your spectacularly wealthy great-aunt’s Mediterranean villa. Classy, but not overly conceptual.

“That’s the trend [in Las Vegas] now,” a resort representative tells me. “A move away from amusement park themes to design and style.”

Though not a scratch-build – it was the AAA Four Diamond Monte Carlo in its previous life – the Park suffers few of the awkward angles and design residue of a typical conversion property. MGM spent lavishly to achieve a modern feng shui, ripping out the old guestroom tubs, for instance, and replacing them with modern, doorless showers.

Vegas has two other premium Strip properties in the works: Resorts World, a mammoth gaming and nightlife compound, financed by Chinese investors; and The Drew, a 2,871-room hotel that will occupy the unfinished Fontainebleau building, abandoned during the downturn. Both will open in 2020. 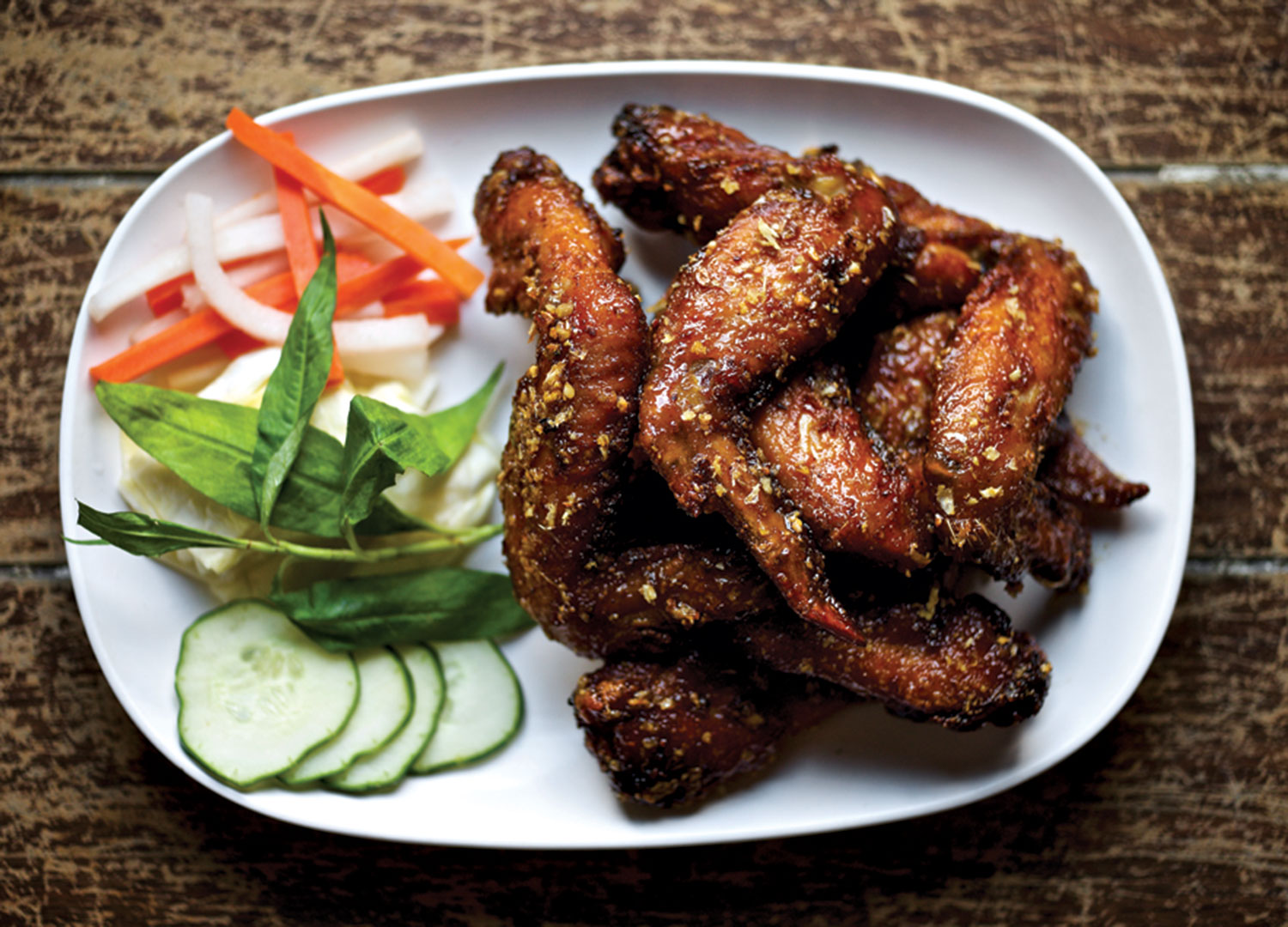 On-Strip Dining
Neither my truffle-mounded plate of sweet corn agnolotti nor the Fantasia-style dancing water show playing out in front of my table is new to the Strip, but both are conversation-stoppers, and they’re new to each other. So maybe that counts?

Thirty years ago, chef Wolfgang Puck introduced Spago to Las Vegas, triggering the foodie-fission reaction that has since engulfed the entire Strip. Today, you’re much more likely to find a “public house” in a casino than a $10 prime rib. Until earlier this year, Spago made its home at Caesars Palace. It was a long, productive partnership, but like most Vegas marriages, it was destined to end.

“Can’t beat the view, eh?” my server says, inviting me to zone out a bit on the restaurant’s new, lakeside digs at the Bellagio (3600 S. Las Vegas Blvd., 702-693-7111, bellagio.com). It’s undeniably a prime bit of Strip real estate, with an exquisite patio that brings you nose-to-mist with the resort’s signature fountains.

The views from inside the restaurant are exalting, too, but if you can score a patio table, it’s a special way to experience Puck’s expressive but structurally firm Cali-Germanic cooking. The dreamy agnolotti is a must-get, as is the surprising “Hong Kong”-style Casco Bay cod in a shifty soy glaze with aromatic jabs of lotus root. But for a glimpse into Puck’s soul, try the straightforward veal wiener schnitzel, which I figure is the chef’s Ratatouille dish – the one that transports him back home to Austria, that connects him with little Wolfgang.

High-profile restaurant openings aren’t exactly scarce among the 28 casino resorts currently operating on the Strip. Some of the big ones in 2018 include New York City sensation Eataly at the MGM Park, Cipriani at the Wynn and the Mario Carbone-led Sadelle’s super-deli at the Bellagio. Or you could knock out six newbies at once at the new Block 16 Urban Food Hall at The Cosmopolitan (3708 S. Las Vegas Blvd., 702-698-7000, cosmopolitanlasvegas.com). Inspired by Los Angeles’ Grand Central Market, it’s essentially a deluxe food court showcasing some of the country’s most illustrious street-food brands, including Pok Pok Wing and Lardo from Portland, Hattie B’s Hot Chicken from Nashville and New Orleans’ gourmet doughnut purveyor District: Donuts. Sliders. Brew.

To pull off the feat of opening six clone restaurants simultaneously, Block 16 executive chef John Courtney spent the spring and summer on the road, pulling tours of kitchen duty at each of the original restaurants. He says it was the only way, for instance, to nail James Beard Award-winning chef Andy Ricker’s sticky rice at Pok Pok – a critical piece of the restaurant’s lunch-plate holy troika, alongside lip-smacking Vietnamese-fish-sauce chicken wings and tangy, enlivening papaya salad.

“Isn’t that just beautiful?” he says as we trade bites of an oozy mortadella and Swiss sandwich from Lardo. “The idea was to get each [dish] as close as humanly possible… and I think we pulled it off pretty well.”

Another shift in Vegas dining philosophy: moving away from the all-you-can-eat breakfast buffet to the more genteel A.M. sustenance scheme of brunch. Many lunch and dinner restaurants are adopting brunch programs, including Pub 1842, an upscale watering hole at the MGM Grand Resort (3799 S. Las Vegas Blvd., 877-880-0880, mgmgrand.com). Conceived by celebrity chef Michael Mina, known in the Valley for his Bourbon Steak imprint at the Fairmont Scottsdale Princess, the restaurant added a cohort of late-morning-friendly dishes to its smokehouse-style repertoire – glorious excesses like Carolina pulled-pork barbecue over a cheddar chive cornbread waffle, humorously dubbed The Pig & the Waffle; and creamy, dreamy white cheddar grits, propelled into the umami stratosphere by a single, yolky poached egg, flanked by four grilled shrimp and a strap of the tastiest bacon I’ve had in ages.

I’ve had a lot of breakfast buffets in a lot of casinos, but no you-call-it omelet ever made me disappear into a comfort-food wormhole like this brunch lineup – served during Vegas-friendly hours (11 a.m.-4 p.m.), naturally. 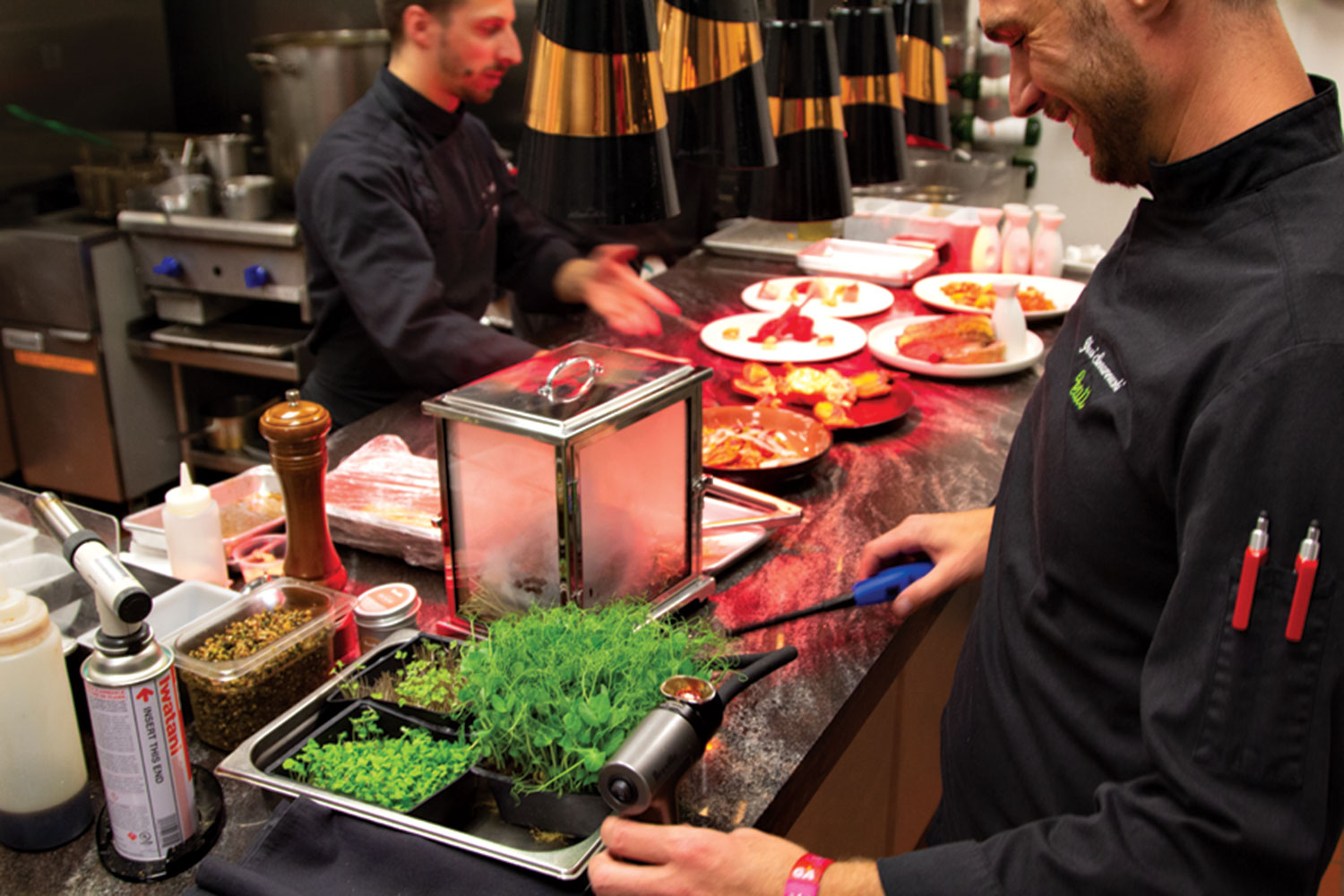 Full entrees are offered, but you’d be cheating yourself if you didn’t opt for one of the chef’s magical multicourse tasting menus – on my visit, starting with a cold cantaloupe soup sweetened by a  dollop of glace, kept frosty by an ingenious dry-ice poaching dish; and ending with Ibérico ham deglazed with soy sauce and honey. Everything in between was marvelous, too, with touches of oddness and meticulous craft reminiscent of late nouvelle master Joël Robuchon. 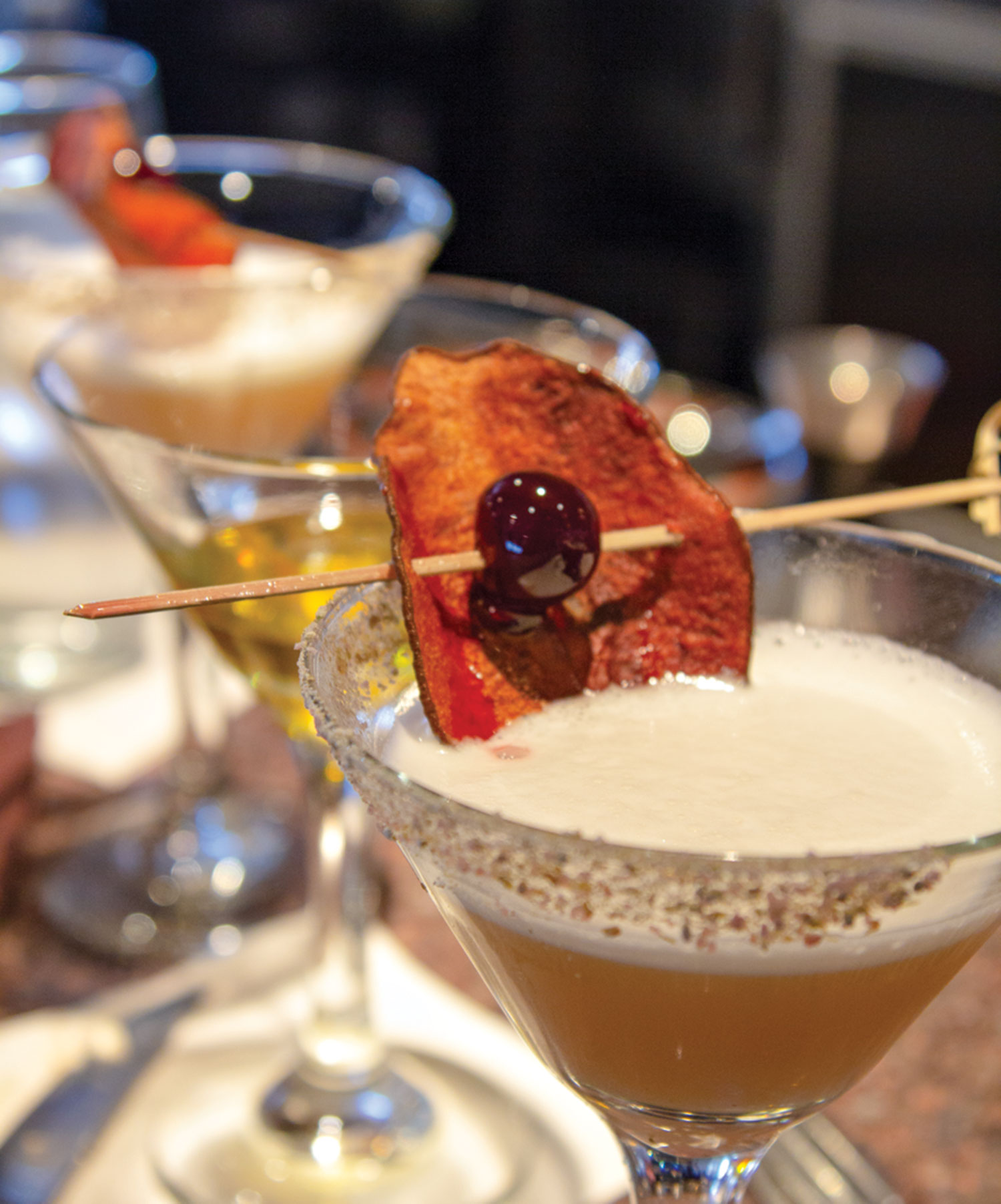 Venturing a little farther into the Vegas hinterland, you’ll find Shiraz (2575 S. Decatur Blvd., 702-870-0860, shirazrestaurant.com), a swank Iranian-Pakistani-Indian restaurant that debuted in July under chef Jainine Jaffer. Two things make Shiraz special: Jaffer’s Persian cuisine, which – with revelatory renditions of regional classics like fesenjan (chicken braised in a brooding, tangy pomegranate and walnut sauce) – is the star of the menu and proof positive that Persian is the most criminally underserved cuisine out there; and the shockingly well-crafted cocktails from barman Jozef Letasi, a Slovakian expat who wields the restaurant’s impressive arsenal of spirits and cordials with confidence and creativity. With an eye to the Persian menu, he even works muddled walnut paste into his Remember Me cocktail, a perfect fall sipper mingling Applejack brandy with Amargo-Vallet bitters and house-made fennel-anise syrup.

Have you ever visited a restaurant you immediately wish you could take home with you? So it goes with Other Mama (3655 S. Durango Dr., 702-463-8382, othermamalv.com), a Western-themed sushi hideaway that I’m tempted to call perfect, equal parts Chula Seafood and Richardson’s. The chalkboard menu features variously briny and sweet oysters, a short but smart sushi selection (like amberjack belly – a more tender version of the sturdy white fish), and four or five entrees showcasing interesting protein cuts like Wagyu skirt steak. The drinks are great, the staff is unfailingly friendly (even when they don’t know you’re a reporter), the prices not nuts. I just want one in Phoenix. Now.

Services/Entertainment
What could make a museum devoted to the history of organized crime – located in Las Vegas, in an old federal post office, no less – even more on point? How about an underground speak-easy? Launched earlier this year, The Underground at The Mob Museum (300 Stewart Ave., 702-229-2734, themobmuseum.org/basement) features a working moonshine still, classic craft cocktails derived from said still and torchy live music on weekends. Coupled with four floors of pics and artifacts recalling Prohibition’s booze-running antiheroes, it’s basically the coolest museum on the planet. And a place your parents will love, need it be said.

As Vegas has shifted away from gaming in its bid to lure millennials and other new visitors, wellness (read: spas!) have risen in stature, and the resorts sink impressive resources into them. Following a multimillion-dollar facelift last year, The Spa at Four Seasons Hotel Las Vegas (3960 S. Las Vegas Blvd., 702-632-5000, fourseasons.com/lasvegas/spa/) received a Five-Star Award from Forbes for its unusually private, bespoke spa experience. It also has a limited-time kombucha and manuka honey Holistic Facial that’s all the rage with the wellness set.

But Vegas remains a show town, and the hottest, bawdiest show on the Strip is Opium (cosmopolitanlasvegas.com/opium), an adults-only affair at The Cosmopolitan. Staffed by a troupe of juggling, smirking, sword-deep-throating miscreants, Opium is actually a revolving residency of sorts produced by Spiegelworld, the counterculture outfit behind Absinthe, another popular Vegas show. The current Opium storyline is a B-movie sci-fi romp that’s like Star Trek filtered through the mind of Pink Flamingos filmmaker John Waters – an eye-dabbingly funny spectacle filled with oversexed robots, hula-hooping Scotties and other zaniness.

See it before it does what things in Vegas do: gives way to something new.

Oldest Strip Hotel
Tropicana
Opened in 1957. The Flamingo is an older brand, but no original buildings remain.

Oldest Wedding Chapel
Wee Kirk o’ the Heather
With a name that catchy, no wonder it’s been tying knots since 1940.