Jonesing for an after-midnight meal…on Tuesday? Follow our roving dining reporter on a tour of the town’s top taverns, taquerias and other late-night food solutions.

BETWEEN THE FOOD, service and retail industries and, now, the gig economy, there are more Phoenicians than ever whose schedules don’t fit the 9-to-5 mold. We might crave waffles at 10 p.m., or a healthy salad at 1 a.m. after we drop off our final Lyft fare. Like the kebab trucks that dot the bar scenes of Europe and the 24-hour burrito drive-thrus of American college towns, Phoenix has its fair share of “drunk food” establishments. But, for those who just want a real meal after a long, nontraditional workday, the Valley offers something even better: honest-to-goodness diners and restaurants that nourish us deep into the questionable hours, when infomercials for wrinkle creams and cordless vacuums dominate cable. These brave eateries soldier on into the darkest hours of the day, flipping burgers and slinging drinks while the “normies” slumber and the oddballs stalk the night. Welcome Diner
929 E. Pierce St., Phoenix
602-495-1111, welcomediner.net
Hours: M-Su 5 p.m.-2 a.m.
Don’t let their devil-may-care attitude fool you – the fun-loving crew at Welcome Diner really does care, both about the historic Garfield district (they stuck with the neighborhood after ending a long run at their original spot on Roosevelt Street; see page 58) and the food they serve to Downtowners and all-nighter ASU studiers alike, until 2 a.m. seven days a week. The WD crew serves up copious platters of poutine to prophylactically negate the side effects of a late-night bender, but it’s the new menu additions – bowls of Cajun-spiced jambalaya and slabs of fried chorizo meatloaf served under bright pickled veggies – that make the new spot on Pierce feel like the Valley’s top late-night dining spot. It’s like visiting the Creole-Mexican-Canadian grandma you never had: “Eat this, dearie – and go easy on the sauce next time.” THE LATEST OF THE LATES
Noodles
SoSoBa
M-Su 11 a.m.-2 a.m.
The western end of Roosevelt Row needed a late-night dining option somewhat akin to what the east end has with Welcome Diner — and SoSoBa, a slurp shop hailing from Flagstaff that dishes up noodles, fiery appetizers and drinks late into the night, is committed to the cause.
214 W. Roosevelt St., Phoenix, 602-795-1005, nonstopnoodleshop.com Pomeroy’s
5555 N. Seventh St., Phoenix
602-264-5411
Hours: M-Su 11 a.m.-2 a.m. *Food served until midnight, sometimes later
At 10 or 11 each night, Pomeroy’s becomes more than the neighborhood bar it’s been since the early ’80s, when owner Michael Nelson opened the place. It’s now decidedly an industry bar, serving the influx of shift workers who gig at all the new restaurants and lounges popping up along Seventh Street. And those same industry types are spilling the beans on just how delicious Pomeroy’s patty melt is – the patty formed and seasoned to order, flattened on the flat-top and deglazed with a “good God!” size glug of red wine (so, yes, it qualifies as a wine-burger). It’s served on griddled rye with a healthy dose of caramelized onions and Swiss cheese. It should also be said that this is a Cleveland Browns bar. So even if you’re not a member of the Dawg Pound, come revel in camaraderie that comes from eating greasy-good burgers, drinking cold beer and throwing darts while mourning a football team’s constant abysmal record. Lupita’s Hot Dogs
16618 N. 32nd St., Phoenix
602-296-5644
Hours: Su-Th 6-11 p.m., F-Sa 6 p.m.-2 a.m.
A newcomer was bound to challenge Glendale’s El Caprichoso for the title of best Sonoran dogs in Phoenix, but few could have expected such a gallant effort from a cart in sleepy North Phoenix, of all places. Just a few minutes’ drive from Desert Ridge Marketplace and North Scottsdale, Lupita’s may even be the best hot dog slinger (hot doggery?) in the state. (Come at us, Tucson.) The custom buns, steamy and soft, are griddled, like they are at El Caprichoso, but the dogs here boast a thicker, crispier and move flavorful wrap of bacon than their competitor’s, allowing the necessary salty-smokiness to shine through the requisite “con todos” mountain of toppings (“with everything” will get your dog topped with pinto beans, griddled onions, chopped tomatoes, avocado salsa, crema and cotija cheese). Glai Baan
2333 E. Osborn Rd., Phoenix
602-595-5881, toasttab.com/glai-baan
Hours: Tu-Th 5-11 p.m., F-Sa 5 p.m.-midnight
There may not be a hotter restaurant in Phoenix – both in terms of popularity and spice level – thanks to Thai-born chef and owner Pornsupak “Cat” Bunnag. After a busy fall and winter season for the Valley’s new dining darling, Phoenicians persisted in packing themselves into this cozy, historical Midtown building (which looks like a converted single-family home, but actually got its start as a diner over half a century ago) over the hellish, typically slow summer. Despite the blazing heat, they tuck into simmering street dishes of Thai origin – fish sauce-seasoned glass noodle salads and hot, creamy noodle curries – made more bearable on the adrenal glands once the sun sets. Barkeep Maxwell Berlin has the bravado to match his eccentric list of drinks – a spiked Thai tea is the most popular amongst them – and has gained a cult following for cooling off any fortunate diners who’ve forgone a table in the dining room and, instead, found themselves a spot at the bar.

THE LATEST OF THE LATES
Cocktails, Coffee, Dinner
Lux Central
M-Su 6 a.m.-midnight
Few places could do so much — a pastry-chef-driven coffee shop, neighborhood internet cafe, dinner spot and cozy cocktail bar, all rolled into one — and still cater to the cool crowd right alongside wide-eyed high schoolers, studious college kids, business professionals, and seemingly everyone you know. It shouldn’t work.
4400 N. Central Ave., Phoenix, 602-327-1396, luxcoffee.com Taqueria Los Yaquis
705 W. Camelback Rd., Phoenix
480-911-6333
Hours: Th 7:30 p.m.-2 a.m.; F-Sa 7:30 p.m.-4 a.m.; Su 7:30 p.m.-2 a.m.
Your bartender friend jokes about getting off work that one time and seeing the sun rise, but that’s just another Sunday for Los Yaquis owner Jose Muñoz. By the time he and his crew close and clean on Friday or Saturday, it’s already 6 a.m. – meaning they’re regularly eating “dinner” in broad daylight before hitting the hay, and waking up several hours later to do it all again. Yaquis is a mobile kitchen but has a permanent setup outside Charlie’s, a gay bar on the edge of Central Phoenix’s Melrose District, which may be the busiest bar in the Valley. That’s how they got their affectionately literal nickname, Gay Tacos: serving chopped steak and chicken street tacos with fiery red salsa through a window directly into Charlie’s bar area. There’s also an outdoor seating area consistently filled with families from the neighborhood, random bar-goers and hungry, munchies-seeking Grand Canyon University students tired of microwaving Kraft Easy Mac.

THE LATEST OF THE LATES
Tacos
Mr. Mesquite
M-Su 10 a.m.-3 a.m.
What Mr. Mesquite’s original location in Old Town’s entertainment district does so well — just chicken and carne asada cooked simply over hot mesquite coals, portioned into flour tortillas at a walkup window — has earned them a faithful following from the clubbiest crowd in town.
7245 E. Shoeman Ln., Scottsdale, 480-758-4859, mrmesquiteaz.com Bitter & Twisted Cocktail Parlour
1 W. Jefferson St., Phoenix
602-340-1924, bitterandtwistedaz.com
Hours: Tu-Sa 4 p.m.-2 a.m. *Food served until 1:30 a.m.
The nerdy, sexy cocktail bar (an odd, but apt descriptor in this case) situated in the historic Luhrs Building on Central and Jefferson, is every bit the beating heart of the Valley’s cocktail scene that it set out to be when proprietor and Scotsman Ross Simon opened the place in 2014. It continues to be a treat to loosen up a little bit at Bitter, with skilled and charismatic bartenders letting top-notch liquor flow into creative, fairy tale-like cocktails. But the sobering up can be just as much fun. Crispy ramen noodle-bun burgers slathered with caramelized onions may be a dime a dozen these days, but B&T’s version boasts such high-volume flavor that it transcends its own novelty. Butter-popped Hurricane popcorn, flavored with nori and studded with spicy rice crackers, will have your appetite feeling spoiled. And who doesn’t want to feel spoiled?

THE LATEST OF THE LATES
Upscale
EVO
M-Su 4 p.m.-2 a.m.
For years, Old Town Scottsdale’s EVO has made it possible to feel fancy late into the evening any given night of the week, with a modern-Italian menu available until 2 a.m. every night of the week.
4175 N. Goldwater Blvd., Scottsdale, 480-265-9814, evoscottsdale.com Roland’s Cafe Market Bar
1505 E. Van Buren St., Phoenix
602-441-4749, rolandsphx.com
Hours: Su-M 8 a.m.-9 p.m., Tu-Th 8 a.m.-10 p.m., F-Sa 8 a.m.-midnight
In 2016, married chefs Nadia Holguin and Armando Hernandez opened Tacos Chiwas to critical and popular acclaim – so much so, they caught the attention of Phoenix restaurant kingpin Chris Bianco. Earlier this year, the trio opened Roland’s in a 100-year-old building that used to house – you guessed it – Roland’s grocery. Now sandwiched between tire shops in a rundown area of Van Buren just east of Downtown’s Garfield neighborhood, Roland’s feels like a harbinger of upscale urbanization to come. The menu specializes in modernized takes on classic dishes and flavors from Holguin’s and Hernandez’s native Chihuahua, informed by the ingredient-sourcing prowess and farmer relationships that Bianco has built his reputation on for the past two decades. The quesadillas – tortillas made from scratch with local Sonoran wheat, topped simply with cheese and cured meat and cooked to bubbly in a wood-burning oven that, in another life, would be used for pizzas like Bianco’s – speak to the nature of this singular business partnership. The place also boasts a late-night menu served after 9 p.m. with goodies like elote, or street corn, with butter, chile powder and mayo that’ll scratch whatever strange midnight snack cravings are itching. And heads up: The owners plan to extend weekend hours this fall/winter season.

THE LATEST OF THE LATES
Burger
Harvey’s Wineburger
M-Su 10 a.m.-2 a.m.
There’s debate over the origin of the wineburger – grilled burgers deglazed with a splash of red wine – but Harvey’s stakes a convincing claim, and the late hours to cater to people who’d most want to eat one: winos.
4812 N. 16th St., Phoenix, 602-248-9950, harveyswineburger.com Cafe Ga Hyang
4362 W. Olive Ave., Glendale
623-937-8550
Hours: M-Sa 11 a.m.-2 a.m., Su 11 a.m.-11 p.m.
On a recent visit, Cafe Ga Hyang owner Nick Rocha proudly called his 8-year-old Korean barbecue restaurant just north of downtown Glendale, “old school.” Valley diners may not have needed the clarification – though if you’re the type who keeps up with food trends, you may have noticed a handful of slick, shiny, newer-school Korean barbecue joints popping up around town, specializing in fried chicken and other Occident-Orient hybrids. Ga Hyang benefits from the comparison. A seafood pancake, a bowl of chilled soba noodles, a bubbling caldron of beef short rib stew — they all have a personal, homemade-tasting touch that eludes the sleeker operations. Delux
3146 E. Camelback Rd., Phoenix
602-522-2288, deluxburger.com
Hours: Daily 11 a.m.-2 a.m.
Delux is a late-night institution in the blocks just east of the Biltmore. Odd, considering it’s in a neighborhood that, though centrally located in the Valley, comes off as the early-to-bed, early-to-rise sort. But you may as well be in Las Vegas or L.A. or some other city that rarely sleeps when stopping in late on a weekday, let alone a weekend. Serving up the novel combo of gourmet cheeseburgers and sushi (we recommend the signature Delux Burger with Niman Ranch beef, caramelized onions, bacon, Gruyère and blue cheese, or the Zen Citrus Salmon Roll), the diner benefits mainly from just-off-their-shift servers, bartenders and cooks employed in the nearby restaurant-heavy corridor. Still, the place just looks better at night, dark and moody with neon blue lighting that’ll make you feel like a lounge singer despite that ketchup on your face. 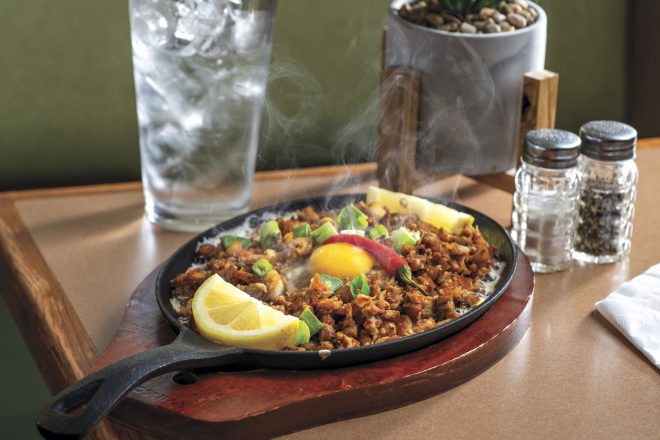