Up your bar-bites game at these new Valley gastropubs.

Scottsdale
Meatballz
Opened: July 2018
As a culinary entity, the gastropub – an upscale pub with food that transcends “grub” – is undergoing constant experimentation, tinkering and gimmick-adding. Consider Meatballz, dedicated to transforming spaghetti’s longtime straight man into a solo act. An order of Saucy Ballz ($4 per slightly-smaller-than-tennis-ball-size orb) includes a choice of beef, pork or chicken balls (a vegetarian option is said to be in the works) with various sauce options. Try the pork with elegant almond pesto, the chicken with chicken-stock gravy and – my favorite – ground beef in a smooth, cumin-tinged Bolognese. For those who find everything better on a bun, the meatball slider ($5) is available in any permutation. (I went with beef in a toothsome mushroom gravy.) Fair warning: The place was still working out the soft-opening kinks in August, and out of some things I tried to order.
Must try: Warm ricotta doughnuts ($9) with chocolate or caramel sauce.
7342 E. Shea Blvd., 480-306-8600, meatballzinc.com

East Valley
Sam & Luca
Rustic Kitchen
Opened: May 2018
This stately, serene Mesa eat-and-drink oasis gives Italian food a gastropub twist. The dining room is small but comfortable, with a patio roll-up window by the bar that should be pleasant in the temperate coming months. The food is traditional, but with a gratifyingly aggressive flavor profile. Pasta fagioli ($8) is served in a vegetable broth so salt-forward it’s almost oceanic, with bits of steak instead of ground beef. Among the entrees, the shrimp risotto ($20) delivers a peppery punch, while the pappardelle Bolognese ($17), blending beef, veal and pork over wide, flat pasta, is comparably rich. A penne special with sausage and broccoli in white-wine-garlic sauce with shaved parmesan ($20) was milder than some of the other choices, but no less yummy. I’d like to see it break into the regular rotation.
Must try: Nutella cheesecake ($8) with salted caramel.
1959 S. Power Rd., Mesa, 480-659-6716, samandlucaaz.com

West Valley
Urban Margarita (pictured above)
Opened: October 2017
Is the margarita typically regarded as rural? Who knows? But this spacious, civilized Glendale g-pub does serve up – alongside a wide variety of suavely cosmopolitan tequila and lime concoctions in “house or skinny” form – a menu of slyly uptown tacos and the like. Start with the taco trio ($11.89), which gives you any three on the list. I opted for the shrimp, with cubes of mango offset by a sriracha that puts up a little fight; the Baja, with cod, cabbage and a mild sauce; and the carne asada, which carried a hint of orangey citrus in the marinade, as it did in the fine carne asada tostada ($8). Desserts include an admirably not-triple-sweet tres leches cake ($8) and a much sweeter ice cream torta ($8.50 a pair) in flaky crust.
Must try: The puffy short rib taco ($13.50), combining braised beef with cheese and avocado on a flaky flour shell puffy enough to stand upright, is where U.M. really puts it all together.
6685 W. Beardsley Rd., Glendale, 623-561-6674, urbanmargarita.com

Phoenix
Hatter & Hare
Opened: July 2018
This former liquor store on Seventh Street previously housed the sorely missed Joe’s Midnight Run. Now it’s yet another watering hole for young hipsters, with an Alice in Wonderland theme: John Tenniel illustrations on the walls, servers in faux-Victorian finery. Staying on theme, owner Glass Half Full Hospitality (Old Town Gringos, Camp Social) offers Alice-themed salads and hot sandwiches. The Croquet With Flamingos ($12) presses turkey, bacon, provolone and an elusive black truffle aioli between toasted bread; the Pig Baby ($11) does the same for bacon and chipotle. Both come with routine pub-grub fries. The Duck Nuts ($5), mixed and shaved nuts cooked in duck fat, were edible, but honestly just tasted like greasier-than-usual pub nuts. Of the salads: The Executioner’s Chop ($11) was missing some of the exotic ingredients promised on the menu: no black forbidden rice, no garbanzos. Curiouser and curiouser!
Must try: The cheese-and-veggie Left at Albuquerque sandwich ($10), if only for the Bugs Bunny reference. But… whither the carrots?
6101 N. Seventh St., 480-865-2447, hatterandhareaz.com 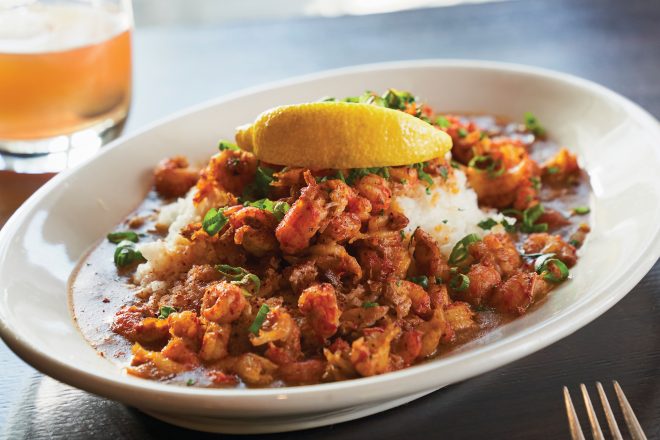