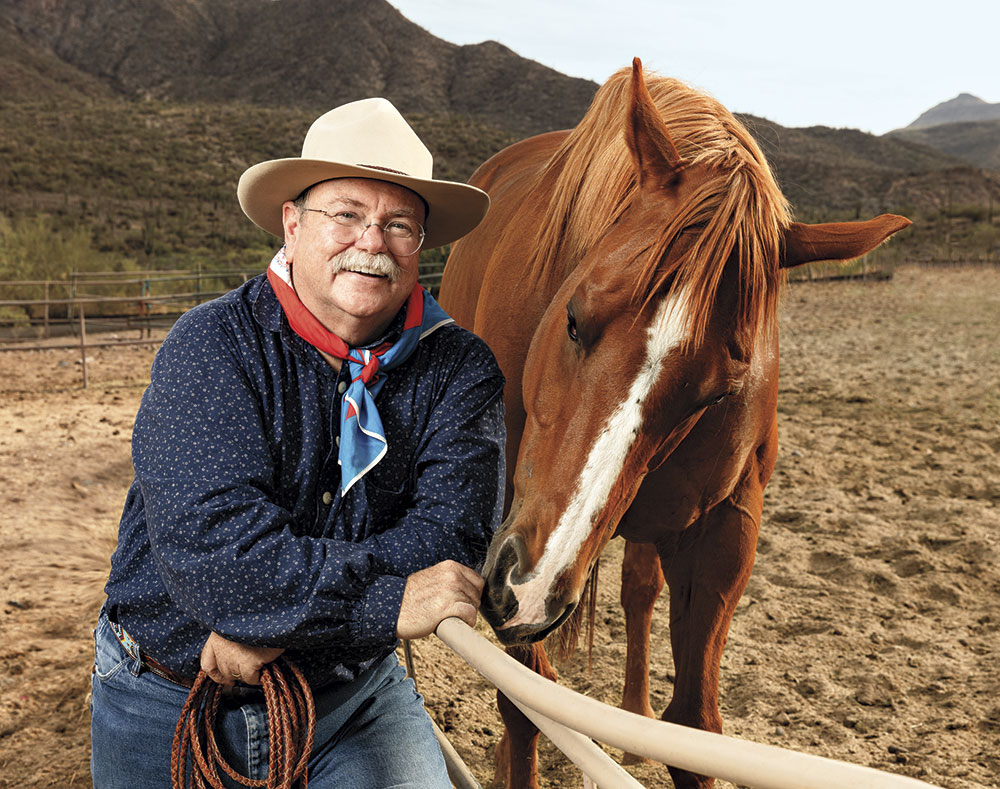 Two-time Emmy winner Michael F. Blake is entertaining readers with his new book about America’s most adventurous president. But he has many other characters up his buckskin sleeve.

When Michael F. Blake gives readings for his latest book, The Cowboy President, he becomes his subject, Theodore Roosevelt. The Buckeye resident is Roosevelt’s doppelgänger, with his hat, round face, round glasses, mustache and stocky physique. When he lapses into Teddy’s voice, every high-pitched word hitting the air with the crisp staccato of a typewriter key thwacking a page, it’s like the Rough Rider has been reincarnated.

So it’s surprising to learn that Blake is a recently retired Hollywood makeup artist who won an Emmy for his work on Buffy the Vampire Slayer. He’s applied lipstick to starlets in limousines while wearing a cowboy hat. He keeps the Code of the West (the rules of cowboy culture) on his iPad. He rode a horse around North Dakota to research Roosevelt for his book, released in March. He also wrote three books about Lon Chaney, the actor and makeup artist who transformed himself into outcasts like the Hunchback of Notre Dame and the Phantom of the Opera in Golden Era silent movies. Blake is so devoted to Chaney, whom he never met, that twice a year he leaves flowers on his grave.

And if all of that seems unconnected, it’s because you haven’t ridden far enough into the story yet.

Blake, 61, was born in Hollywood, the son of Larry Blake, an alcoholic actor whose personality vacillated between an Old Fashioned and a Molotov cocktail. Larry’s drinking hampered his career, so he sought vicarious success through his son. He pushed Michael into acting at age 2. He coached the boy to tell jokes, tap dance and recite Hamlet’s “To Be or Not To Be” soliloquy. Michael flew a broom in Bewitched and had parts on The Lucy Show, Kung Fu, The Munsters and Adam-12.

Being a child actor, Blake says, “was a mixed bag. I hated [auditions]. But on the set, it was the greatest time of my life. I’d be on the back lot, and I could have the Western street entirely to myself for five minutes.”

Starting at age 3, Michael’s father repeatedly threw him out of the house, saying, “I wish you’d never been born.” The boy wandered or went to the movies until his mother fetched him. Michael found better role models, though, sadly, both were dead. At age 8, the “cowboy-crazy kid” read a book about U.S. presidents and was unimpressed by the men in top hats and ties. He turned the page and “the Mormon Tabernacle choir started singing ‘Hallelujah,’ ’cause there’s Theodore Roosevelt… in buckskin shirt and alligator boots,” Blake says. “I said, ‘This is my guy.’” 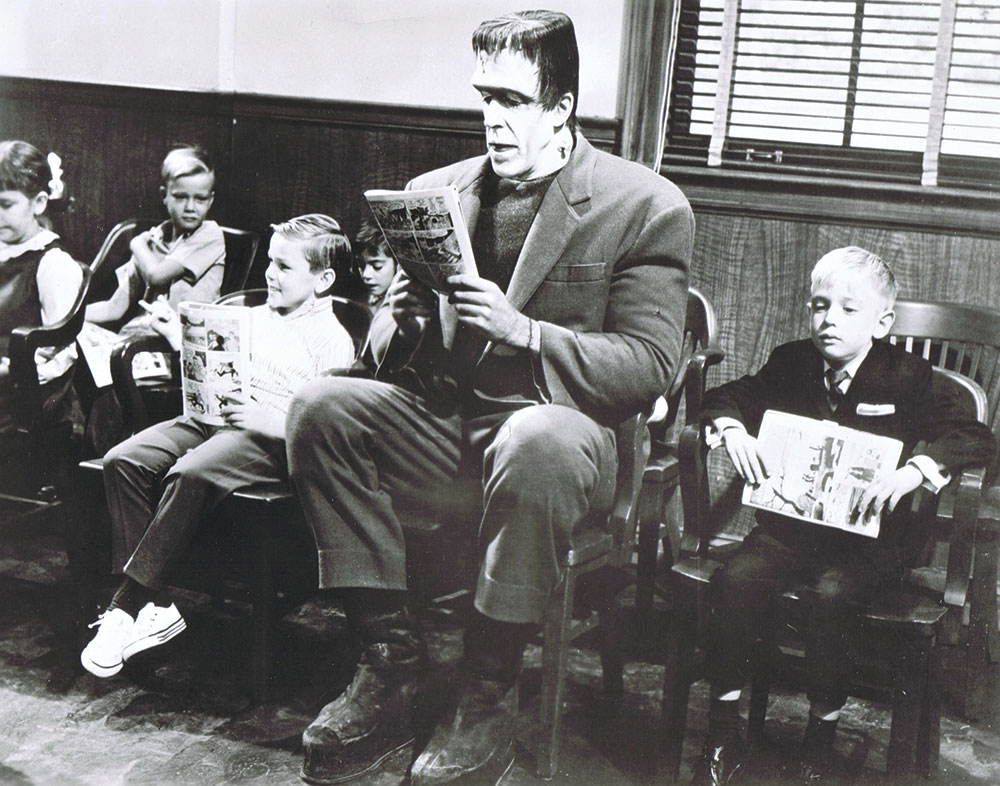 At 10, Michael watched his father cameo in Man of a Thousand Faces, a biopic about Lon Chaney. The makeup master was a gruff man who was good at heart. “He was kind of the outsider. I was always the outsider.” Blake’s attachment to Chaney is mystical. He even credits Chaney with saving his life.

As a tortured teen, Blake would have succumbed to drugs, he says, if he hadn’t been focused on following in Chaney’s footsteps, practicing makeup techniques and transforming himself into characters. He thought about ending it all, but told himself, “Who’s going to put flowers on Lon’s grave?” When he was 14, his father threw him out. He allowed the teen to return, but ripped up his Chaney stills. They got into a fight. Larry slammed Michael against the wall and choked him. Michael’s only thought was, “OK, this is it. Good. I’m ready to go see Lon Chaney.” His father, startled by Michael’s serene acceptance of death, released his grip.

Chaney was also the reason that, at 22, Blake quit acting and started a 40-year career as a makeup artist. He worked on productions including Happy Days, X-Men: First Class and Spider-Man 3. He remembers the smells of Max Factor cosmetics and 6 a.m. coffee while he made up stars like Tom Selleck and Burt Lancaster.

It was Lancaster who suggested Blake write about Chaney. Blake wasn’t confident because he’s slightly dyslexic. But he had help – from his wife of 27 years, Linda (whom he met through a 976-number dating service) and, he believes, from Chaney. Often during his research, Blake says, he felt a ghostly hand upon his shoulder.

Blake wrote another two books about Hollywood Westerns, but he hadn’t forgotten Roosevelt. He admired the “Conservation President,” not just because he was a cowboy, but because of his character. That respect grew as Blake hiked the same trails Roosevelt hiked, scooped up the mud he trudged through and rode horseback behind a buffalo herd. He was so inspired he’s working on a second book about Roosevelt.

One of Blake’s favorite stories is when outlaws stole Roosevelt’s boat. Roosevelt chased them in a canoe through a half-frozen river, captured them and walked 45 miles to deliver them to a sheriff. He didn’t want revenge, Blake says; he wanted justice. “That’s why I relate to somebody like Theodore. I have a real black-and-white sense of justice.” It’s why, he says, he breaks up fights and defends children and victims of prejudice. “My wife says, ‘That’s because your childhood was filled with injustice. Because your father was so unjust to you, you have to see that justice prevails.’”

The Roosevelt Trail
Follow in the cowboy president’s footsteps at these North Dakota sites. 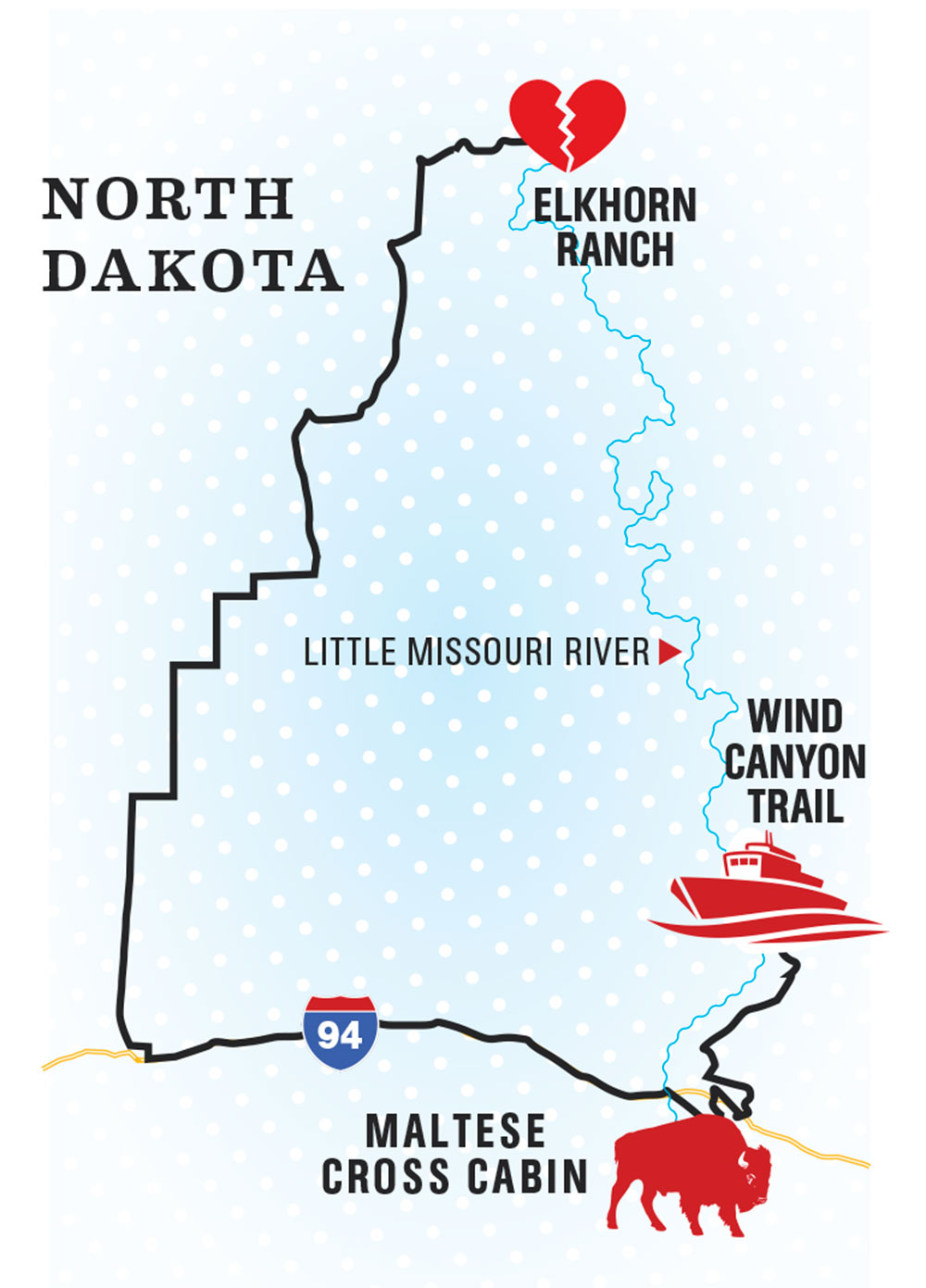 At Theodore Roosevelt National Park’s south unit, peek into Roosevelt’s first abode in Dakota Territory, Maltese Cross Cabin, and see the bison that attracted him to the badlands. Nearby, Medora Riding Stables lets you experience the land the way Teddy saw it: on a steed.

North of the park, visit the ruined foundations of Elkhorn Ranch. About four months after Roosevelt’s wife and mother died on the same day, he established this peaceful, remote retreat to heal his broken heart.

In the park’s south unit, the short Wind Canyon Trail overlooks the Little Missouri River. When thieves stole Roosevelt’s boat, he built a new boat and – armed with guns, provisions and Tolstoy’s Anna Karenina – chased them down this semi-frozen river and captured them.