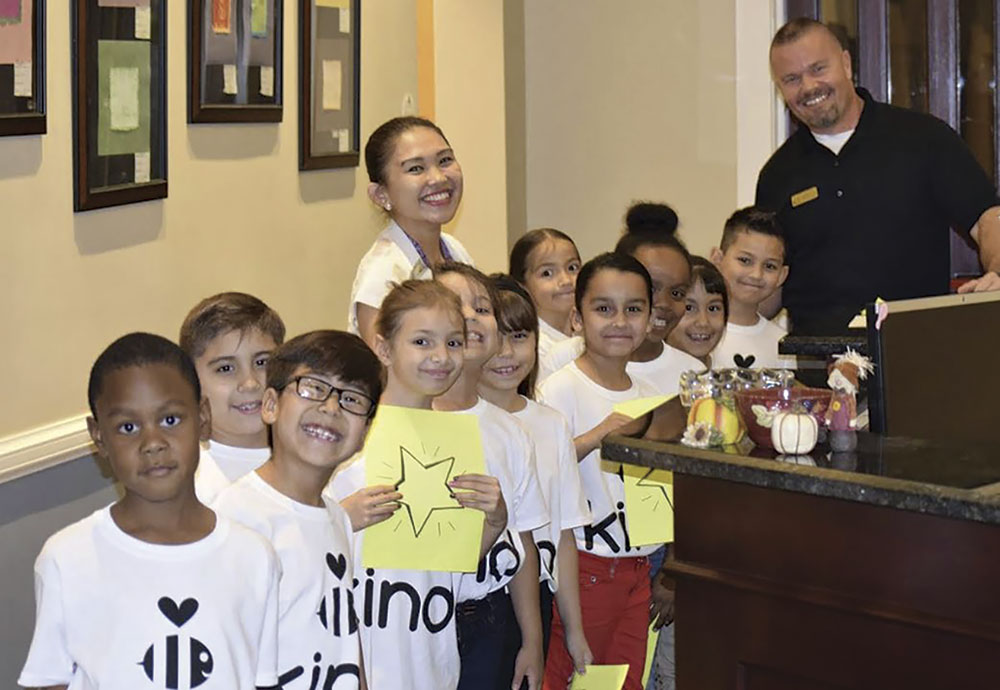 Honey Kate Araza has only been living in America for two years. But already the ambitious 27-year-old Filipina has been making a name for herself in Arizona.

She’s a budding social media star, with more than 6,600 followers on Facebook and a growing presence on Instagram. She’s got her own eCommerce store on WordPress, where she sells a curated assortment of her favorite Japanese anime-inspired stationery, from My Melody and Totoro notepads to cute cat-headed gel pens. This June, Araza was one of six participants in the 2018 Mrs. Philippines Arizona pageant, delivering an impassioned speech about the importance of inspiring “confident and positive contributors to the community.”

Araza’s own confidence and positivity is impressive, considering she has not seen her husband or three young children in person since leaving the Philippines to work in Arizona two years ago.

“We do talk on FaceTime every night,” says the perpetually upbeat mom, whose youngest was just a newborn when she left. “I help the kids with their homework, and they can see me and talk to me on the screen. So, in that way, it’s like I’m still there.”

Seeking higher pay than she could command in her hometown of Ormoc City, Araza has been working in Arizona on a temporary visa that could keep her away from home for another three years if renewed for an extension. Like many foreign-born workers, she’s here filling a job position deemed too low-paying to attract American applicants.

Only it’s not in agriculture, home health care, housekeeping or food service. Araza is a second-grade teacher.

She’s one of 48 teachers from the Philippines that the Pendergast Elementary School District in Phoenix’s West Valley has recruited since 2015 to help fill the state’s roughly 2,000 vacant teacher positions, a little-known hiring strategy recently brought to light in a New York Times story covering May’s #RedforEd walkouts by Arizona teachers.

“Everyone knows teacher salaries here haven’t been as good as in other states,” says Patti Davis-Tussey, head of human resources for the strapped district, where starting wages for teachers have stagnated at around $38,000 per year, about $20,000 below the national average. “We had to get innovative.” Davis-Tussey had heard about the U.S. State Department’s J-1 visa program, which allows teachers from other countries to teach in the U.S. as a “cultural exchange” initiative (the Philippines has been the biggest importer, followed by Jamaica and China). The district had already been utilizing the internship program Teach For America, which recruits recent U.S. college graduates to teach in high-need schools. But TFA charges schools an annual finder’s fee of around $5,000 per teacher, and Davis-Tussey figured that for the same amount, she could fly to Manila and recruit dozens of English-speaking teachers with bachelor’s-equivalent degrees and experience in education, as required under the J-1 program.

“I came back with 15 teachers,” she says. “And then we went back two more times over the next year and a half to recruit more.”

Davis-Tussey says the program has solved the schools’ staffing problems, and Araza says the arrangement has been financially rewarding for her family – she claims she’s making about 10 times the meager $375 per month she made as a teacher back home. Araza has also fast-tracked her own American dream through all her outside activities, but she isn’t planning on staying here. The J-1 program offers no path to citizenship.

“My plan is to go back to teaching in the Philippines after the visa expires,” she says. “But I’ll carry with me the professional growth and experience I gained in the U.S.”

Critics of the system charge that, besides splitting up families and creating other teacher shortages abroad (in less than 10 years, according to the Manila Times, Filipino schools lost more than 4,000 teachers to the U.S. and other countries), migrant teachers are often exploited by employment agencies in their home countries, who can charge exorbitant fees to connect them with American schools, and placed in substandard housing during their stay in the states. In 2017, a lawsuit filed on behalf of a group of Filipino teachers recruited to work in Louisiana schools claimed that one agency’s practice of confiscating passports and visas until debts were paid up amounted to forced labor under federal laws against human trafficking.

Donato Soberano, who left behind a wife and two teenage daughters in Manila to teach science to seventh graders at Sunset Ridge Elementary School in the Pendergast district, says he paid the equivalent of $12,500 to Manila-based Petro-Fil Manpower Services to help him land the job, cover his airfare to Arizona and pay the first six months’ rent on a three-bedroom apartment, which he shared with five other Filipino teachers. While Soberano has been happy with the arrangement, he says his family has yet to reap the benefits.

“When I left the Philippines in 2016, I actually borrowed from my bank and used some of my savings to pay that fee,” he says. “And I had to pay back the amount I borrowed within one year to avoid paying big interest charges. So I’m just starting to save some money.” Back in Manila now for the summer, Soberano says he’s finally got enough saved to treat his daughters to a vacation as a reward for the good job they’ve done in school.

“I’m bringing them to Singapore,” he says, proudly. “If I had continued to work here in the Philippines, I wouldn’t be able to afford that.”

Now that Arizona teachers have received at least some recompense after the protests, though, will districts still look abroad to fill vacancies? And, if so, couldn’t continuing a practice of recruiting a transient staff of teachers from economically deprived countries willing to accept the low wages American teachers are protesting only serve to stall the advances domestic teachers have been making?

“Hiring teachers on J-1 visas ensures that your teacher workforce will turn over every three years – and high turnover of teachers undermines school stability and student learning,” says Lora Bartlett, author of the book Migrant Teachers: How American Schools Import Labor and a vocal critic of the practice. “A transient orientation treats teachers like short-term, stop-gap workers in whom employers invest little and take all they can to the detriment of the teachers, the students and the schools.”

Davis-Tussey insists Pendergast’s cultural exchange teachers are regarded as more than stop-gap help. “I believe in our district, at least, we would like to continue the programs,” she says. “And if salaries increase, then we would just offer that increased salary to our exchange teachers. I think all school districts are looking for experienced teachers that want to work in our schools and contribute to student success. And these teachers clearly do.”

Plus, there may be a hidden side benefit to having Arizona’s disgruntled teachers work side by side with foreign-born teachers who, in Bartlett’s words, have “risen to the top of the developing country’s teacher labor market in order to ascend to the bottom of the industrialized nation’s.”

In one of the videos posted to Araza’s Instagram page, the Filipino teacher talks shop with a fellow teacher at her elementary school, Kelly Neckels, a 12-year veteran in the Pendergast district who was born and raised in Phoenix. At one point Araza asks Neckels what she tells her students to inspire them, and Neckels says simply, “Always believe in yourself and never give up.” Araza audibly gasps and clutches her heart, as if hearing that affirmation for the first time, while Neckels studies her overcome peer from overseas with a mix of amazement and inspiration.

“Honey Kate has such a passion for learning about our school climate, our students and our staff,” Neckels says. “She comes with wonderful new ideas to share with our staff, and she is extremely open and positive to learning new things. I just think she’s a good example to everyone how this positivity can affect your teaching and your students, as well as yourself.

#FilipinosForEd
While recruiting teachers from overseas has helped fill teaching vacancies in the U.S., it’s creating a corresponding shortage of schoolteachers in the Philippines. In less than 10 years, according to the Manila Times, Filipino schools lost more than 4,000 teachers to the U.S. and other countries.

To combat the exodus, government officials there proposed a bill in 2014 to increase the monthly salaries of public school teachers from P18,549 ($425 USD) to P25,000 ($573 USD). However, the Philippines’ current president, Rodrigo Duterte, has nixed salary increases for the immediate future, instead pushing an information campaign to hip Filipino teachers to the inflated cost of living in the U.S.

According to the collaborative cost-of-living database Expatistan.com, here is the current cost of living in Phoenix compared to Manila, Philippines: