It’s 6:30 a.m. in Phoenix, and conservative personality James T. Harris is riffing over the AM airwaves from the News Talk 550 KFYI studio in Central Phoenix. Traffic is moving, but not as briskly as Harris as he jokes about pop star Rihanna, who attended the Met Gala in arguably sacrilegious garb. The smooth-voiced host is a believer, but he’s not tiptoeing around the singer’s looks. She looked “lovely” he says. He corrects himself: She looked “sexy.”

Later, leaning back in a chair at the studio, Harris says he’s not interested in hosting your father’s conservative talk radio. His drive-time program, The Conservative Circus with James T. Harris, which debuted on KFYI in January, is equal parts right-wing diatribes and PG-13 jokes. Harris is new here, but he honed his concept from 2011-2017 on Tucson’s 104.1 FM KQTH, where he peddled his “Cocoa Conservatism.”

“We are irreverent,” Harris, 53, says of what separates his show from typical conservative fare, doffing his cowboy hat and rubbing his baldpate. “We laugh at ourselves, we laugh at others.” But it’s not the cowboy hat that makes him stand out in right-wing radio. He’s African-American, and one of just a handful of conservative black major-market talk show hosts.

Clothed in a black button-down and jeans, Harris punctuates boisterous statements – about conservative host Ben Shapiro’s take on the state of anti-President Donald Trump comedy, the bad blood between the McCain and Trump families, or Kanye West’s emergence as an unlikely conservative figure – with cackling laughter. He’s not the most polished broadcaster, but his style is genuinely conversational and loose. The last hour feels particularly casual: Harris riffs on pop culture, unencumbered by the moralism that defines much of talk radio. It’s a circus, he says, and he’s just the ringmaster. 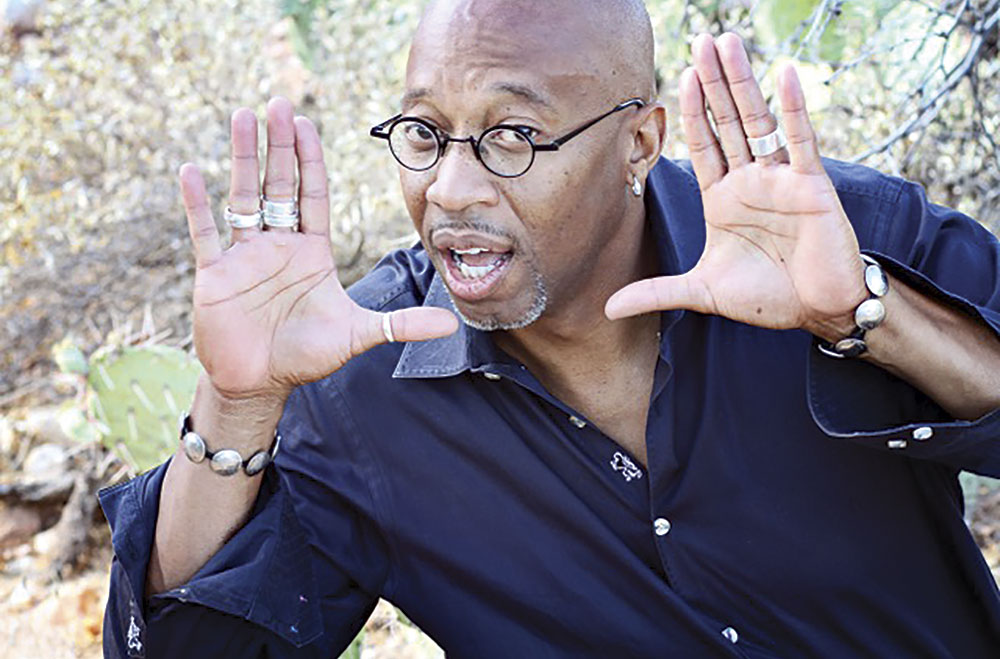 Harris grew up in Milwaukee, a lifelong Green Bay Packers fan from a Baptist family that votes Democrat. While attending Parkland College in Champaign-Urbana, Illinois, he experienced a shift in his personal politics. Challenged by a buddy on a blind test of social issues, Harris was surprised to find his sympathies leaned right.

“He said, ‘You’re a Republican,’” Harris says with a laugh. “I was like, ‘No!’ I remember the first time I voted, I voted for Reagan. I didn’t tell my parents for two years.”

Though he admits he hasn’t always felt welcome in the Republican Party – he cites the 2012 documentary Fear of a Black Republican as an example of why it hasn’t been easy for a black man in the party of Lincoln – Harris says he didn’t join to be accepted.

“The values of conservatism are what appeal to me,” Harris says. “I’m not uncomfortable saying I’m a conservative… as far as whether the party has always been accepting… [of] Americans of African descent or other groups, well no, not really.”

Many people suggest his conservative takes must be part of “an act,” he says. “[People say] ‘You’ve got all this jewelry, you can’t really be conservative,’” Harris laughs. “Are you actually judging a book by its cover?”

Harris began his career teaching high school history and sociology in Brown Deer, Wisconsin. He worked as a motivational speaker and called in to local talk-radio bastion WTMJ-AM in Milwaukee frequently enough that the station gave him a shot, then he began filling in for other hosts.

In 2008, Harris’ opinions went viral. At a John McCain rally in Waukesha, he urged the Republican presidential candidate to push harder against then-U.S. Senator from Illinois Barack Obama. Harris told McCain he’d taken an “ass whoopin’” for supporting him. “It is absolutely vital that you take it to Obama…” Harris said. The crowd roared in agreement. The clip hit YouTube (current views: 24,000) and made national headlines.

TV offers began rolling in. Harris wound up on CNN, and after an on-air disagreement with fellow black conservative Shelley Wynter, he stormed off the show (that’s on YouTube, too). He says the attention earned him the dubious distinction of being “the most hated black man in America,” but it also sparked interest from radio outlets like KQTH in Tucson. He called the station and asked if they wanted him on air.

“I went to my wife and said, ‘If Tucson makes a play, are you interested?’” Harris says. His wife Janine, with whom he has three children, replied, “When do we go?”

This year, Harris made the move to KFYI, home of syndicated programs from Rush Limbaugh, Sean Hannity and Glenn Beck. The new version of the show is somewhat tamer. On the Tucson show, Harris and producer Ross Williamson interjected Hollywood gossip and hosted celebratory Gay Tuesdays, featuring the work of gay musicians, and a Freak of the Week segment.

“There’s much more of a defined structure as to how a show is put together [in Phoenix],” Williamson says. “We have tons of freedom here, but we’re in a new way of doing things, which has actually helped the show become a little more polished.” Harris agrees. The old show “had stuff that was out there,” he says. “This audience… we’re not there yet.”

But Harris expects the Circus will get wilder. He’s heard his show described as “Rush Limbaugh meets Howard Stern,” which inspires him. When it comes to the scandals dominating the White House – the Stormy Daniels story chief among them – Harris laughs them off. He says Trump’s role as a media figure makes it that much easier for him to call out other elites.

“Rappers used to rap about how Trump was a boss,” Harris says. “He’s got three wives and how many kids? He’s got side chicks! Is it crass for me to say ‘Donald Trump was a ho’? … Does it bother me? No. Are the times more freaky deaky? Yeah, it’s Babylon.”

“We’re not there yet, but there are a couple things we do where people are coming up to me saying, ‘Oh my God, I almost spit my coffee out,’” Harris says. “And I’m like, ‘Here we go.’ More of that.”

Laugh Track
Growing up, James T. Harris’ mother Dessie thought he was going to be a comedian. Adopting a tone of mock outrage that ought to be familiar to his listeners, Harris says he wishes she’d encouraged the conservative radio host to go down that path. “I could have been great!” Harris howls. Still, comedy informs his show as much as politics. Here, a rundown of some of his comedic favorites.

Dave Chappelle, David Allen Grier, Key & Peele
“Politically, we don’t agree,” Harris says of Chappelle, who recently announced a joint standup tour with liberal commentator Jon Stewart; Grier of Chocolate News; and Key and Peele of Key & Peele. “The jokes that I lift from their comedy and use on this show, it fits in with what I’m doing.”

Richard Pryor, Redd Foxx, Moms Mabley
Growing up, Harris would “borrow” his parents’ comedy LPs. “We used to sneak into our basement to listen to that stuff,” Harris says. “My parents had a party for the hip set [on] Saturday night, and then the church party on Sunday… In a strange way, that’s how I balance it. Because we love Jesus, but we’re irreverent on the show. You can be both, I believe.”

Chris Rock
Though Rock often plays too blue for Harris, he says the comic, whose Tamborine special premiered this year on Netflix, is an inspiration. “Once I filter through all the F-bombs… this cat is really true and honest.”