Put some suds in your summer with our seasonal spotlight on the Arizona craft beer scene. PLUS: Drink the state’s most award-winning beer!

WHAT’S THE DIFFERENCE BETWEEN A SUMMER AND A WINTER BEER? Saddle Mountain Brewing Company
At the Oscars of brewing – i.e. the Great American Beer Festival – the Goodyear brewery won gold in the Scottish-style ale category for its Taildragger Clan-Destine. The same beer took silver at the 2018 World Beer Cup in Nashville, making it the state’s de facto most celebrated brew.

McFate Brewing Co.
At World Beer Cup in Nashville, the Scotts-dale brewery won a gold medal in the Chile Beer category for its Hatch Chile Gatos.

Scottsdale Beer Co.
Won bronze for its Cannonball Australian-Style Pale Ale in the international-style pale ale group at the GABF.

Goldwater Brewing Co.
Another bronze-winner at GABF, this time for its Machine Gun Teddy in the American-style brown ale group.

“Juicy” or cloudy IPAs
Like brewers all over the country, Arizona beermakers have wrapped their arms around New England-style IPAs, an unfiltered iteration of the India Pale Ale, often made with citrusy, less-bitter hops like Galaxy and Citra. Top Arizona versions include Mother Road Brewing Co.’s Tower Station, Borderlands Brewing Co.’s Toole Avenue and The Shop Beer Co.’s Church Music.

Distaff craft
The Arizona Craft Brewers Guild promotes an all-female collaborative beer every year or so – in 2018, it was an oatmeal IPA called Murder She Oat – to highlight the good work of women in brewing. And more women are having an impact on the state’s craft beer scene, from Christina Wolfe at Wanderlust Brewing to the female-owned, in-the-works Greenwood Brewing.

Return of the pale lagers
If juicy IPAs are the long-form programs of brewing, lagers are the compulsories – tests of orthodoxy, where precision and purity are key. Lightly malted with few adjuncts or add-ons, pale lagers don’t give brewers the luxury of concealing mistakes. As such, many of Arizona’s top brewers are returning to them, like Pedal Haus’ award-winning lager (see page 129).

Barreling/mutating
One of the blessings of brewing is its repeatability – beers can taste the same from one year to the next, irrespective of climate, blight, etc. One way to inject excitement into the equation is to invite a second round of fermentation, or simply age beer in barrels. One example: Huss Brewing Co., which will release its Divide & Husstle Imperial Chocolate Porter collaboration in a vertical series of barrel agings. ETA: 2019. It’s gonna rock.

Satellite Locations
Hanging a second shingle is all the rage among Valley craft brewers these days – particularly for suburban outfits seeking a presence in the city core. On the heels of SanTan Brewing Company’s new location in North Central Phoenix, State 48 Brewing opened a second taproom (on the Van Buren strip), while cult favorite Arizona Willderness Brewing Co. has a RoRo outpost planned. “I’m just fascinated by fermentation in general,” says John Scarbrough, explaining his recent move into the world of professional brewing after spending the previous decade and a half as a winemaker with Arizona Stronghold Vineyards and Page Springs Cellars. Certainly, the Verde Valley native’s passion for turning sugars into alcohol via the miracle of anaerobic conversion has paid dividends for Pine-based THAT Brewery, where he serves as head brewer. Scarbrough brings a winemaker’s sensitivity to the job, not to mention actual wine barrels – like the old Sangiovese staves he used to create the brewery’s superb, limited-run Wild Wild Strawberry sour ale (see pg. 129). So yeah, fermentation is fun for Scarbrough. “Who knows? Maybe whiskey will be next.”

WHAT ARE THE MAIN DIFFERENCES – AND SIMILARITIES – BETWEEN MAKING BEER AND WINE ?
“I would say there’s a little more cleanliness and creativity with beer. Wine is a little more structured – no adjuncts, less experimentation. Beer has more fluidity and creativity. But one of the jokes I make is that it takes a lot of beer to make a little good wine. Winemakers are always drinking beer. Ultimately, both are about appealing to the human palate.”

YOU CREATED WILD WILD STRAWBERRY BY MUTATING THE BREWERY’S STRAWBERRY BLONDE ALE WITH FRUIT AND YEAST. IS THAT A TREND IN BEERMAKING? TURNING FLAGSHIPS INTO ZOMBIE BEERS?
“That’s a good analogy. And yeah, you see that happen[ing] a lot more. It’s a trend-driven industry, and people are always trying new things, staying ahead of the curve. And it’s a pretty low-risk thing to take a beer that you already have a lot of, and play around with it. If it doesn’t work, it’s not like you lose a whole vintage or something.”

WHAT ARE THE DRAWBACKS OF BREWING IN THE HIGH COUNTRY? WHAT ARE THE ADVANTAGES?
“Well, the world of brewers is very supportive and helpful. But there aren’t any other breweries in Cottonwood [where THAT is bottled] or Pine. So I can’t go down the street and get a bag of hops if I run out. Or bounce ideas off other people. That’s the drawback. But [the advantage] is, it sets us apart. That helps sell the story and helps sell the beer.”

10 SEASONALS TO SEEK OUT THIS SUMMER
Our summer picks for the aspirational Arizona beer-drinker. NEW BREWERIES AROUNDTOWN
Arizona has yet to be nationally recognized as a craft brew mecca akin to its neighbors Colorado and California. But that’s blarney. These days, it seems you can’t drive more than a few miles without seeing a new brewery. We profile six newbies who are putting Arizona beer on the map.

Copper Brothel Brewery
Opened: March 2018
The Jesser family moved from craft beer haven Colorado to open its own brewery… in Arizona wine country. Head brewer Samantha Jesser brings several years of homebrewing experience to the place, where she focuses on “drinkability” for a wide range of palates, including winos who maybe need a crisp kölsch and pulled pork sandwich (made by dad/pitmaster Robert) after a day of wine tasting.
3112 Hwy. 83, Sonoita
520-405-6721, copperbrothelbrewery.com

Edge of the World Brewery
Opened: March 2018
This humble brewery is aptly named: Nestled on the Arizona-Utah border, Edge of the World is the first brewery – nay, bar – to open in the town founded by fundamentalist Mormon sects. Once closed off to the rest of the world, the community was exposed to a media firestorm set off by the arrest of convicted sexual predator and former church leader Warren Jeffs. Like good Mormons, the brewery owners state their “mission” of sharing craft beer includes “bringing together a community.”
70 N. Central St., Colorado City
928-875-8710, edgeoftheworld.bar

Flying Basset Brewing
Opened: March 2018
Named for the pair of basset hounds adored by pilot Rob Gangon and his wife, Sara Cotton, Flying Basset Brewing is a true pet project with 25 beers (some brewed in-house, others are guests) on tap, a full food menu and seating for 200. Gangon was an award-winning homebrewer for several years before making the leap. His debut beer was a caramel-hued copper ale, followed by a double IPA and a hefe.
720 W. Ray Rd., Gilbert
480-426-1373, flyingbassetbrewing.com

Historic Brewing Company
Eternal Sunshine of the Sessions
5.2% ABV / 45 IBU
The Flagstaff brewery marks the spring equinox with this seasonal, appropriately dry-hopped with Equinox hops, which have a green pepper aroma.

THAT Brewery
Fossil Creek IPA
3.9% ABV / 66 IBU
This “summer IPA,” which gets its citrusy zest from Citra, Cascade and Simcoe hops, is hugely popular at the brewery’s Pine and Cottonwood locations. Like Disneyland’s Pirates of the Caribbean ride reincarnated as a taproom, Bone Haus Brewing is certainly a black sheep in the middle of stuffy, retiree-friendly Fountain Hills. But the owners – longtime friends Keith Chapman (pictured right), brewmaster Andy Weiner (pictured left), and designer/artist David Lozeau – say they’ve received an incredibly warm reception since opening the town’s first microbrewery in April 2018. In between perfecting their signature Black IPA and scheduling food trucks to make the trek north to the brewery, Chapman answers a few questions about their dark yet warm, skeleton-strewn passion project.

WHY FOUNTAIN HILLS?
“We have lived in Fountain Hills for many years, and while the area supports a diverse blend of young families, retirees and tourists – and hosts several art fairs and music events – there was still a desire to present more destination beyond “the fountain.” We believe that Fountain Hills can be a destination location that provides locals and visitors something that doesn’t exist anywhere else, and we’re hoping that our passion encourages other people and businesses to invest, build and flourish in this town.”

WHAT’S UP WITH ALL THE SKULLS?
“The Bone Haus Brewing name and theme are a nod to the many ossuaries and catacombs, also known as bone houses, we’ve visited across Europe. Those warmly lit chambers contain artistic and stunning displays of skeletal remains of everyone from revered monks to common townsfolk, but those final resting places are hardly final, as they now serve as monuments for inspiration, reflection and celebration for the living. The Bone Haus Brewing taproom is, at its heart, a gathering place that beguiles the senses, with curiosities and surprises around every shadowy corner.”

ANY BREWS YOU WANT TO HIGHLIGHT FOR THE SUMMER SEASON?
“We are currently featuring our Raspberry Blonde Ale, a 4.4% ABV summer ale that is light and refreshing. It has a refreshing yet subtle fruity taste that doesn’t overpower. We also plan to prepare some special seasonal beers using some edibles harvested from the nearby desert and some more traditional, citrus-based ales. We also offer our more traditional, double-pitched yeast Witbier that has been quite popular as the heat arrives in Arizona.”

17 BOTTLES (AND CANS) OF BEER ON THE WALL
Available at most specialty beer and liquor shops, these summer-friendly Arizona crafts will look handsome on any refrigerator rack. 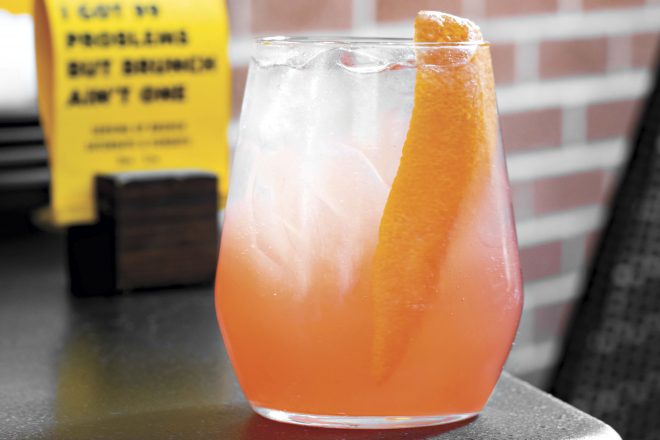