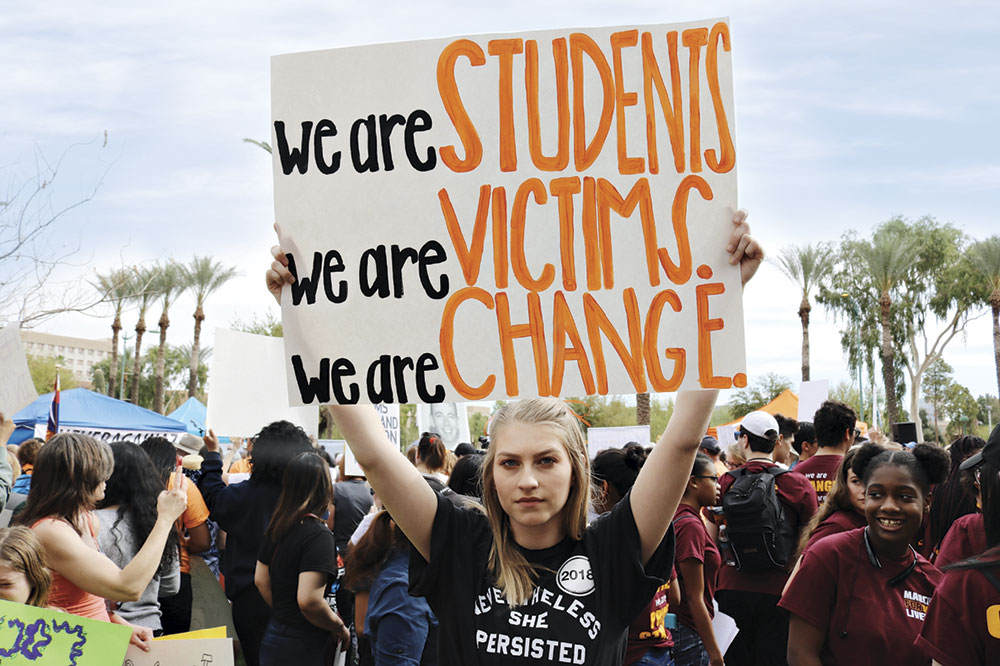 How Arizona’s young student activists – and their teachers – are learning the new tools of protest together in the age of Trump.

As co-organizer of the March for Our Lives “sibling” protest in Phoenix on March 24th, 17-year-old Jordan Harb has been swamped with follow-up events since the massive student-led demonstrations against gun violence.

“I get, like, four hours of sleep,” Harb says, driving home from another demonstration at the Arizona State Capitol. “My grades have definitely taken a big hit, because I’ve missed a lot of school. But the impact that we are making as a movement is worth the sacrifice. I can re-take a class, but I can’t go back and stop a kid from being shot.”

Harb says his teachers at Mesa’s Mountain View High School have been supportive of his activism – mostly because many of them have been involved in protests of their own. For students, the catalyst is the #NeverAgain movement launched by survivors of the February school shooting in Parkland, Florida. For Arizona teachers, it’s #RedForEd, named for the red shirts West Virginia teachers wore during their successful strike for better pay. On April 26, following a well-publicized march on the Arizona Capitol, teachers walked off the job. The tactic paid off. On May 3, lawmakers passed a budget restoring $400 million to state education funding, facilitating a 10 percent pay hike for teachers this year, and 20 percent by 2020. Governor Doug Ducey – who called the budget a “win” for teachers – signed it into law, effectively ending the walkout.

These days, it’s not just college students raging against the machine. According to a recent Washington Post-Kaiser Family Foundation poll, one in five Americans have participated in political protests since the beginning of 2016 – the largest groundswell of activism since the Vietnam War. College kids are once again leading the march: Researchers at University of California at Los Angeles are reporting the highest nationwide levels of student protests since they began tracking campus activism in 1967. 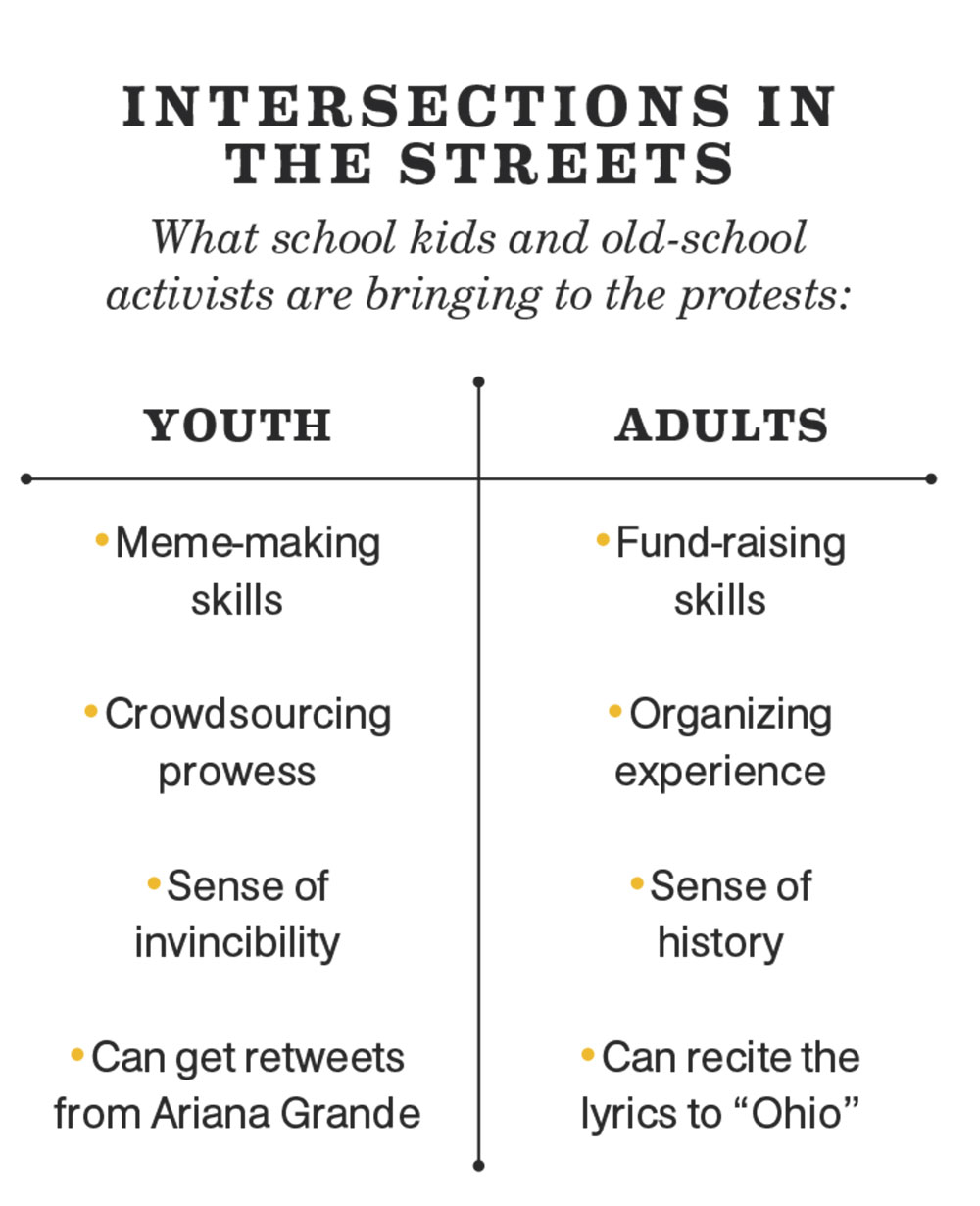 But younger kids and older adults are now joining them out on the streets – and each generation is drawing inspiration from the other. Today kids as young as 9-year-old Yolanda Renee King, granddaughter of Martin Luther King, Jr., are rallying crowds of 800,000 at the Washington Monument — and veteran activists like 76-year-old David Crosby are cheering their efforts on Twitter.

Much of what’s uniting the generations is opposition to the actions of President Donald Trump: 70 percent of the protesters polled by the Post disapprove of Trump’s leadership, and many recent movements, from the Women’s March to the rallies supporting DACA and protesting immigrant bans, have risen in response to his policies. But they’ve also learned from Trump how to dominate the news cycle: through relentless use of social media, snappy sloganeering and, of course, the orchestration of huuuge public rallies.

“Social media is such a powerful tool, and we make sure to stay on it to continue to get our message out,” says Noah Karvelis, a music teacher at Tres Rios Elementary School in Tolleson and one of the lead organizers of Arizona Educators United, the once-tiny Facebook group that adopted West Virginia’s idea of wearing red in solidarity and christened it #RedForEd. The group’s grown to more than 40,000 members. “But it’s also important to get our people out to the rallies and marches. It brings a sense of solidarity, to meet some of these people face to face and hear their stories.”

The template created by the Parkland students – assign a handful of charismatic spokespeople, engage with the media, build excitement for a march, then sustain momentum through social media – informs the teachers’ activism. “When I first decided to speak out against money being taken out of public schools to subsidize private school tuition, I would speak at legislative hearings, as citizens are allowed to do,” says Dawn Penich-Thacker, an English teacher at Arizona State University who co-founded Save Our Schools Arizona, another teachers’ group involved in #RedForEd. “But I quickly realized how little influence we actually had in that arena.” She’s now a camera-friendly face on local newscasts.

Students, in turn, are looking to transform the stagnant democratic process they’re railing against.

“I can totally see myself running for office,” says Harb. “In fact, I can run in 2026. So that’s something our current representatives should keep in mind. Because we’re energized, and we’re angry.” That gusto applies to their teachers, too.