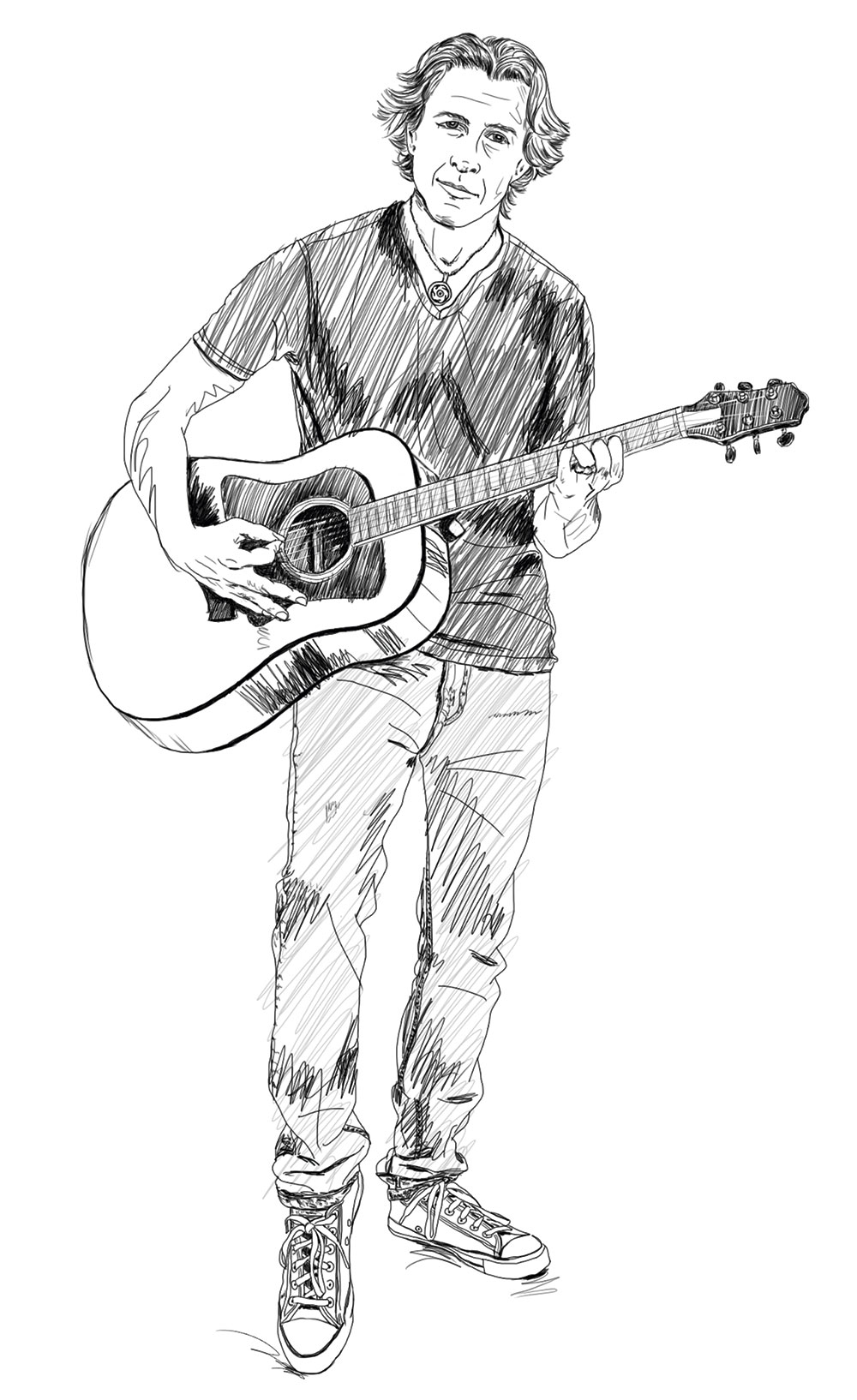 Growing disenchanted with the desert? Not to worry – hometown boy Roger Clyne will make you fall in love with Arizona all over again. “As a writer, it gives me a palettte that’s so colorful,” says the lead of Roger Clyne & The Peacemakers. “I love the desert – how beautiful and ferocious and gracious it can be. I can tell when I’m on a tour bus when we’re approaching it… I can almost feel a change in the air, that we’re close to home.” And the 50-year-old should know: He’s been zigzagging across the country playing his funky blend of punk and country with a tinge of mariachi for more than two decades following the smashing success of “Banditos” with his former band, The Refreshments, on their 1996 breakthrough album Fizzy Fuzzy Big & Buzzy. These days, the dad of three is still touring nonstop while making time to run his Mexican Moonshine Tequila label from his home in Tempe, play on a local soccer league and enjoy a cerveza or two in his beloved Rocky Point, where his band’s annual Circus Mexicus musical festival kicks off June 7.

You and the band always seem to be touring. Why is being on the road so central to who Roger Clyne & The Peacemakers are?
“In a selfish way, it’s just really fun… In an artistic way, it’s the most important way to connect with people. Writing and recording a song is akin to writing a letter. It’s personal, but not person to person. Performing is almost a conversation with an audience. It’s important to keep that relationship alive.”

Any bucket list destinations you have yet to visit?
“I’ve always wanted to walk the Arizona Trail. I would love to walk Arizona from corner to corner. There are so many other places in Arizona that I’ve never seen – I’ve never been to the North Rim of the Grand Canyon. In Mexico, there are a thousand places I’d like to visit, like San Miguel de Allende.”

What is it about Mexico – the place and the culture – that enchants you so?
“I was exposed to Mexico throughout my lifetime… My father is a rancher in Southeast Arizona [and] we used to work down on the ranch and go across the border – no problem before all this ballyhoo. I developed a very healthy respect for that culture… Somebody put it succinctly once: In Mexico, time isn’t money. They’re not so worried about acquisition there as they are here. It’s nice to feel that slowdown.”

Your one-night show in Rocky Point has grown into a four-day extravaganza. Give us your three top recommendations for the ultimate beach day in RP.
1. “For culinary amazement that almost defies expectations, go to Chef Mickey’s [Place].” chefmickeysplace.com
2. “For live music and a kick-back experience, I’m going to have to go with my band’s cantina called Banditos.” banditoscantina.net
3. “Everyone’s going to have to walk the Malecón [boardwalk]. It’s quintessential Rocky Point. Check out the souvenir shops and get a beer.”

What was the impetus for starting Mexican Moonshine Tequila? Got a favorite way to drink it?
“Back in 2004, we were summoned to a meeting in Rocky Point with cantina owners who said ‘We sell more tequila when [you’re] there in a weekend than the rest of the year.’ They proposed we make some tequila together and sell it at the [Circus Mexicus] festival… Long story short, to do it [by the books], I had to find a coalition of the willing to do research on what it would take to do it right. It took six years to get our ducks in a row… My favorite of the margarita species is the Peacemaker Paloma – Mexican Moonshine reposado, Italian grapefruit soda, coarse salt over rocks. Really simple, really refreshing.”

You run the label with your wife, your college sweetheart Alisa. How do you two make it work?
“It’s respect. It also helps a lot to be in love with someone, and be in love with someone you actually like. We’re friends, you know? This is going to sound weird, but I’m gone a lot, so we spend a lot of time separated. We end up missing each other… I actually think that’s been really good for us – our time together, we treat it as sacred.”

We all love to belt the line in “Banditos”: “The world is full of stupid people.” Do you still agree?
“The first part of the chorus is overlooked by so many people. We grab onto ‘The world is full of stupid people.’ That’s essentially incontestable. But it [starts with] ‘Everybody knows.’ So we’re all part of the problem. We’ve got to come together to be the solution. As we’re frustrated by actions of other people, so are they too by us. It’s a fun, snarky little thing, but it has a point.”