No longer one-half of a political power couple, Councilwoman Kate Gallego is riding solo and running for mayor of Phoenix

As soon as Kate Gallego walks into Royal Coffee, chats with fellow regulars and sits down with a cactus-infused tea, it becomes clear why the Phoenix City Councilwoman suggested this Heritage Square haunt. When the Democrat, 36, announced in October she was running for mayor of Phoenix, she enthused about how her infant son, Michael, influences her long-term vision: “I want to make this city so cool that he’ll never want to leave.”

All around this Downtown neighborhood are places that exemplify that coolness. She points out the Rosson House and two restaurants from James Beard Award-winning chefs. They’re the kind of cultural hot spots she wants to preserve and multiply, to attract longtime Phoenicians and the workforce of tomorrow. Just beyond are the Phoenix Biomedical Campus she helped expand, and Galvanize, a coding school/startup incubator she helped recruit. They’re part of her emphasis on strengthening tech, data science and health care to make Phoenix competitive.

This area also holds difficult memories for Gallego. For many years, she lived nearby with her now ex-husband, U.S. Congressman Ruben Gallego. In 2013, her first year on City Council, floods devastated her district. The residents’ plight opened her eyes to the need for sustainable infrastructure and services.

All these issues will come to the fore in the mayoral election this August or November, depending on when Mayor Greg Stanton – who is running for U.S. Congress – chooses to leave office. “We’re a young city, but growing very quickly,” says Gallego, now vice mayor. “I think this election will be so much about what kind of city we grow up to be.”

Gallego grew up in Albuquerque, the daughter of two attorneys. As a child, Kate Widland had asthma, which got her “very interested in air quality and related issues of fairness,” she says. “It seems unfair to have bad air quality and breathing problems.” Fairness is a value she mentions a lot. She played competitive softball and says, “In youth sports you learn a lot of lessons about what’s fair and what’s not fair.” Seeing people in her city struggling financially made her ask, “How can you make people’s lives a little bit better and a little more fair?”

She showed signs of leadership in the Girl Scouts and student council, and had an early predilection toward city planning. Planning seems to suit her. Talk to her today, and her manner is warm and friendly, though she speaks with the measured cadence of someone who thinks… very carefully… about everything. 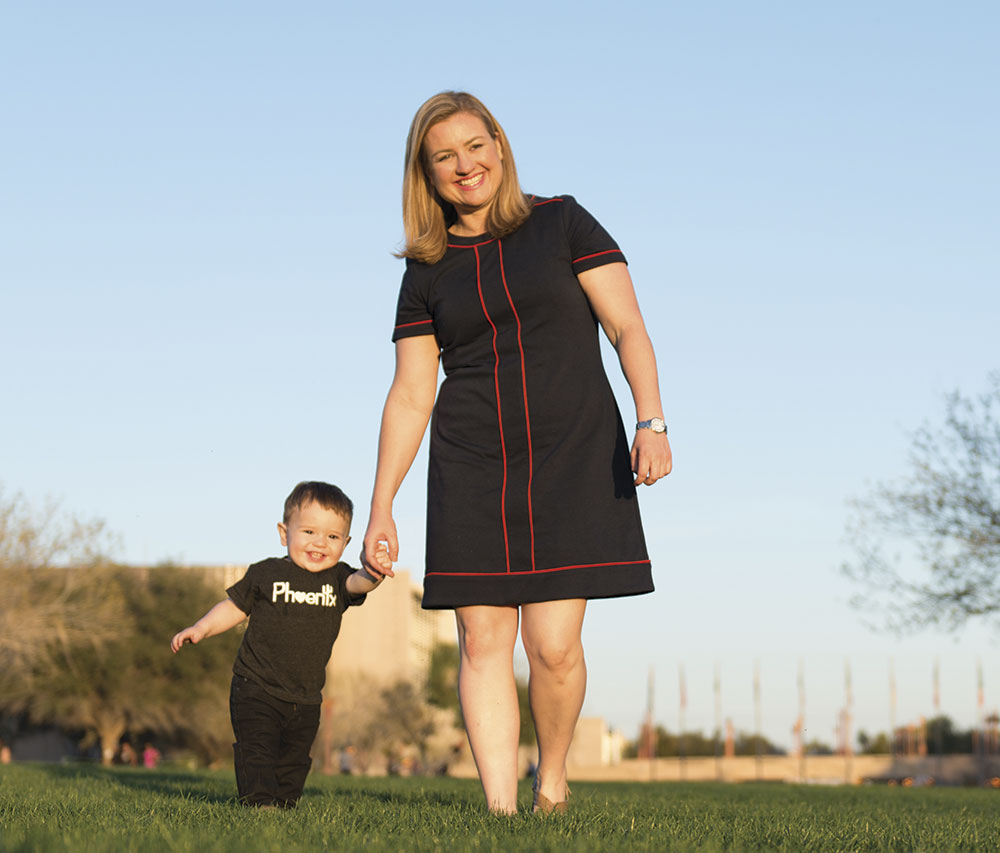 Her interests in air quality and urban planning motivated her to major in environmental studies at Harvard University. Then September 11th changed her life in unexpected ways. To raise money for 9/11 first responders, Kate attended a date auction. The prospective date on the auction block was fellow Harvard undergrad Ruben Gallego. Kate bid early and repeatedly, but the price surpassed her budget. At the last minute, Ruben told the auctioneer to ask Kate to make a final bid. She said she didn’t have enough money. Ruben chimed in, “She’s cute. If she bids one more, I’ll pay half.”

The couple’s relationship wasn’t blissful for long. Ruben enlisted in the Marines and was deployed to Iraq. “It was a tough time,” Kate says. “Sending people off to war used to be something, to me, that happened in the movies, and not in my real life… That fear of the unknown [was difficult].”

After graduation, Kate wanted to move back West. She got a job with the Arizona Democratic Party, then the Arizona Office of Tourism. Working under Governor Janet Napolitano was an inspiration, she says. “She was such a solution-oriented leader, very no-nonsense. I hope to also be someone who can go out there and just get things done for the people that I represent.”

Stanton says similar things about Kate. “Councilwoman Gallego and I have had a great working relationship. She is a smart, tenacious and effective leader and a colleague for whom I have much respect.”

Soon, Ruben followed Kate and got involved with the Democratic Party. Kate told Ruben that if he was going to propose, she wanted it to be exciting. So, when he was floor whip at the 2008 Democratic National Convention, he had the audience hold up signs that read “Marry me, Kate.” They married in 2010, and Ruben joined the Arizona House of Representatives. Kate earned an MBA at the Wharton School of Business at the University of Pennsylvania, through an in-person program on weekends. Simultaneously, she worked at SRP in renewable energy and economic development. Her work flamed her frustration with politicians.

“I felt like we could do so much more on economic development and that we ought to be more intentional about how we grow and where,” she says. “I also felt the city could do a better job providing even services to every part of the city. I felt like we ought to invest in infrastructure everywhere, and that every part of the city deserved great amenities.”

She was elected to the City Council in 2013 – the only woman at the time. Shortly after, she had a seizure and temporarily lost her driver’s license. She’s never had another seizure, but, she says, “It opened up my eyes to what people who depend on public transportation face every day.” She led the campaign to triple the light rail system, expand bus service and Dial-a-Ride, resurface roads and make streets more walkable.

In 2016, Kate and Ruben announced they were divorcing, one month before she gave birth to their first child. Both decline to speak about their private lives. However, Kate and Ruben each bring Michael to political events (she says he already feels at home on the House floor), and Kate makes no secret of how he shapes her outlook for the city: “Being a young parent makes you think… about the future and what type of world your child will grow up in.” She was surprised when hospital staff told her the newborn was deemed at-risk because they live in South Phoenix and he is half Hispanic. “That was a sobering reminder that we have a lot of work to do to build a city that works for everyone.”

For Gallego, that work involves making the system more fair. She’s drafting an ordinance to shine a light on dark money in elections and led a successful effort to hold elected officials accountable for sexual harassment. She wants to improve education and boost the economy in all parts of the city.

“I’m frustrated with government at the national level, but I feel like we’re getting so much done at the city,” she says. “Maybe we can be the branch of government that makes people feel good about government.”

Nicholas J. Sarwark
The chairman of the Libertarian National Committee thinks local government should fix streets and provide emergency services but not spend money on things like light rail.

Michael Lafferty
The Republican-turned-Independent owns Lafferty Electric and Lafferty Development. At press time, he has no campaign website or stated positions.