In his crisp white shirt, navy blue khakis and billed cap, Atsuo Sakurai looks more like a clean-cut Maytag repairman than the sake samurai he actually is – though the soft-spoken 37-year-old would surely pooh-pooh the grandiose comparison.
But what else should we call him, given that Sakurai honed his craft for 10 hard years in the sake-brewing industry of Niigata – a prefecture on the island of Honshu famous for its premium versions of the rice-based beverage – earning a highly coveted “first-grade” sake brewer title from the Japanese government after passing a rigorous exam?

Where dedication and discipline are concerned, Sakurai is unmistakably samurai-like. And he’s also something of a rarity. “I don’t think anyone else certified by the Japanese government is [brewing sake] in the States,” he says, in halting but effective English.

And how’s this for unique? Sakurai did not launch Arizona’s first and only craft sake brewery – Arizona Sake – in a trendy Downtown warehouse district, or in a chic Scottsdale storefront, but in a cramped garage in Holbrook, the crusty Route 66 frontier town best known for its proximity to the Petrified Forest and kitschy Wigwam Motel. Holbrook doesn’t even have a Japanese restaurant, let alone a population of on-trend hipsters to support a craft sake operation.

So how in the world did Sakurai get from Niigata to Holbrook? It’s a story rooted in his very singular Japanese-American experience.

Majoring in what we would call a “food and beverage” program here in the States, Sakurai was pretty much like any other college student – which is to say, he and his buddies loved liquor. “Any kind,” he says with a smile.

Over time, however, Sakurai grew increasingly more fascinated with sake and its deeply embedded cultural traditions, an irony given that the rest of his generation was turning away from the centuries-old tipple in favor of beer and cocktails, he says. Sakurai attributes sake’s decline in popularity in Japan to a hidebound industry that hasn’t evolved: “It’s stuck. [The big brewers] don’t create new products and new flavors, which would activate a second market.”

Namely, young people. But Sakurai swam against the tide, targeting a career as a toji, or sake brewer. He scored a job at a brewery at age 24, where he later met his wife, Heather, as he gave a tour of the facility. She was an American expat – a native of Holbrook, in fact – teaching English in Japan at the time. They married and had three children, and as his family grew, Sakurai began to dream of owning his own business – ideally, a sake brewery.

Chasing that dream seemed futile in Japan, given that Japanese sake breweries were closing at an alarming rate – from roughly 2,055 breweries in 1988 to 1,225 in 2016, according to sake expert John Gauntner of Sake-World.com. Sakurai says the problem is worsened by the Japanese government, which protects the few remaining sake brewers by refusing to issue new licenses to would-be brewers, a practice he believes makes little sense, given sake’s diminishing prestige in Japan.
The U.S. began to look like a far more promising place for Sakurai to start his business. According to a February article in Forbes, sake sales have risen 8 percent annually in the U.S. since 1994. Meanwhile, there are only about a dozen known American sake breweries, according to The Brewer magazine. As we all know, modern consumers love local. Sakurai did the math, and liked what he saw.

Sakurai considered opening his brewery in Washington or Oregon, whose wet climates mimic central Japan, but in the end, it seemed important to have a family support system, so the Sakurais moved to Heather’s hometown of Holbrook in 2014. Sakurai spent a year acquiring and building his own brewing equipment — including three metal tuns, a temperature-controlled room and a wooden, table-like contraption that in the final stages presses the sake mash to extract liquid. His neat-as-a-pin setup looks more like a makeshift chemistry lab than a brewery.

Concurrently, Sakurai set off on the far more difficult task of navigating the federal, state and local statutes governing alcohol production. It was especially complicated at the state and local level, given that no one on the government’s end knew the first thing about the sake-brewing process – though Holbrook was incredibly supportive from the get-go, he says. In late January of this year, the day after Sakurai’s 37th birthday, the State of Arizona gave him “a good present” – a license to operate a winery. By May, Sakurai had brewed his first 100-bottle batch of sake, applying an Arizona Sake label that sports a simple zigzag line to represent a mountain range.

Although sake, called nihonshu in Japan, can be made in an astonishing variety of ways, Sakurai brews junmai ginjo, a premium style that favors traditional tools over modern machinery and uses old-fashioned, labor-intensive methods in the brewing process. Junmai, which means “pure rice,” contains just four ingredients – rice, water, koji (steamed rice to which mold spores are added) and sake yeast – without additives such as sugar or alcohol.

Sake-making always begins by “polishing” or milling the rice to remove the outer layer of each grain and expose its starchy core, but with junmai ginjo, the rice is aggressively polished, leaving only 60 percent of the original grain. The extra milling removes the grain’s headache-causing congeners and impurities and results in an even more pure-tasting sake, Sakurai says.

Sake is often described as “rice wine” because its appearance and flavor profile are somewhat similar to wine, and is sometimes mistaken for a spirit, because of its comparatively high alcohol content, but it’s closest analog – at least structurally – is beer. Like beer, sake begins with a starchy grain that must be converted to sugar before fermentation; unlike beer, the conversion from starch to sugar and sugar to alcohol occurs in one continuous step. It’s essentially a long, agonizing babysitting job, as Sakurai introduces yeast and koji to his well-polished rice, leaves them to ferment, then adds more rice, koji and water in three different stages, allowing the mash to ferment for 21 days (always checking, checking, checking) before separating the sake from the dead yeast residue and unfermented solids. Before his sake is bottled, Sakurai measures its alcohol content, which he prefers to keep at a precise 15.5 percent.

Junmai ginjo is also fermented at colder temperatures for longer periods of time, resulting in a light, fruity, refined sake – or in the case of Arizona Sake, a clear, elegant elixir with notes of apple, banana, pineapple and melon. Sakurai’s brew is fresh-tasting in part because it’s unpasteurized (nama in Japanese, a word found on his label). He says that while pasteurization can be good, stabilizing the quality of mature sakes, it can also alter – or even ruin – sake’s flavor. Besides, he likes doing things the old-fashioned way.

One thing Sakurai didn’t predict when he started dabbling in those early months was that Holbrook’s semi-arid climate would actually prove more favorable to sake-making than Japan’s wet climate. Aridity inhibits mold growth, and garden-variety mold – not the specific mold that releases enzymes that start the fermentation process – is ever-present on the sake-making equipment in Japan, thereby affecting Japanese sake’s aroma and taste. While there may be an acceptable hint of funk in Japanese sake, the fresh aroma of Sakurai’s sake and its pure, clean taste may be better suited to the U.S. consumer. On the downside, it must be kept refrigerated. The alcohol content is too low to act as a preservative.

As with all premium sakes, Arizona Sake is best served cold. Sakurai likes serving it in a small wine glass to signal its quality, but he also recommends heating it ever so slightly on a cold winter night, promising “it will be nice” – nothing like the warmed-up rotgut served at low-end sushi bars.

Sakurai believes that American sake should be made with American ingredients. Hence, he buys medium-grain California rice – the most important ingredient, he maintains – and uses Holbrook water from the Coconino Aquifer. “Because of the terroir [of the water],” he says.

Brewing isn’t possible in hot weather, so Sakurai has been using his time this summer to share his product with potential customers and spread the gospel of sake. He’s picked up more than a dozen accounts around the state so far, including Sakura Japanese Restaurant, Tourist Home Urban Market, Nomads Global Lounge and SouthSide Tavern in Flagstaff; Fujiya Market, Tops Liquors, Sushi 101 and Shady Park Bar in Tempe; Hot Noodles Cold Sake and Hiro Sushi in Scottsdale; and Nobuo at Teeter House in Downtown Phoenix.

For now, Sakurai’s brewery has no public, point-of-sale capacity – no tasting room, in other words – and no website, so interested parties should line up a visit to one of the aforementioned purveyors.

Among them, Teeter House maestro Nobuo Fukuda might have been the earliest supporter of Sakurai’s grand endeavor. Introduced to the toji by Taka Fujiya, owner of the Fujiya Market in Tempe, the chef admits he had his doubts about sake brewed in Holbrook, which is “not like beautiful sake country.” But he was a fast convert after tasting Sakurai’s high-country grog. “It blew my mind,” Fukuda says. “It was like fireworks – so fresh and good, with a quiet ending.”

Sakurai’s latest success was winning over the members of the Consulate-General of Japan in Los Angeles, who liked his sake so much they plan to pour it at receptions. Sakurai’s star is clearly on the rise, but he keeps his American dream in a purely Japanese mindset, vowing to “make the best sake I can make,” which he hopes will reflect well on Holbrook.

More importantly, he wants to be an encouraging role model for makers both Japanese and American who feel pinned down by bureaucratic and cultural barriers. “I want to show them,” he says. “I did this, you can do this.” 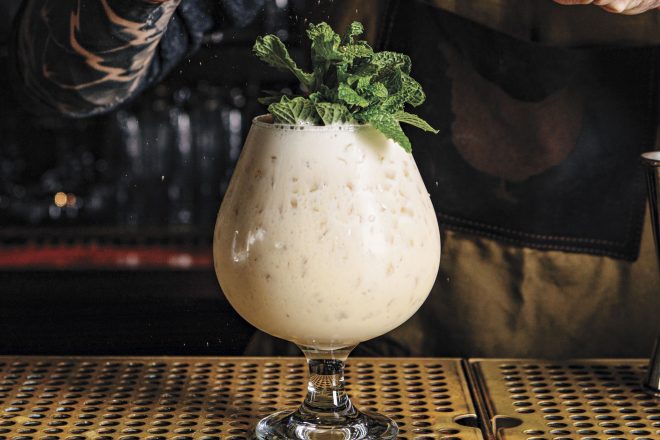