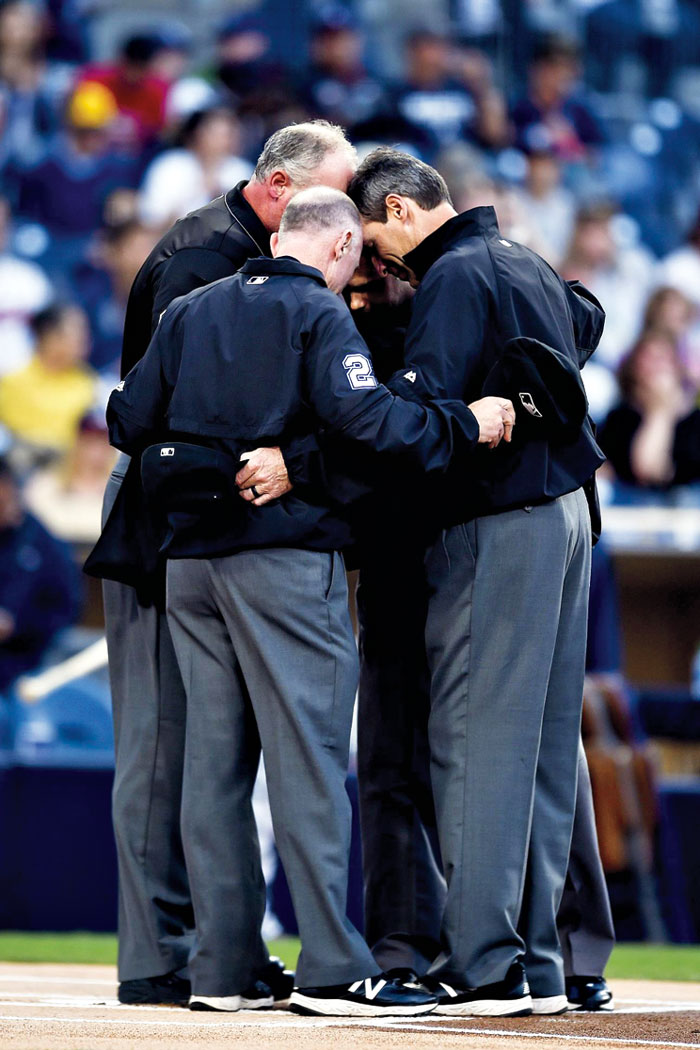 At 6 foot 4 and 255 pounds, Ted Barrett fills doorways. His bulging biceps, silver goatee and steely blue eyes give him the appearance of a cage fighter, or maybe a bouncer. He looks like someone you wouldn’t want to mess with, even if he is wearing bracelets.

They’re manly black silicone bracelets, though. One is inscribed with “Giant Killer” and the other says “Jesus Loves Umpires.”

Barrett, 51, is an umpire for Major League Baseball. He’s also a preacher. Fourteen years ago, he founded Calling for Christ (CFC), a ministry for umpires. The umpire world is small, he says, and the lifestyle can lead to missteps. CFC offers an annual retreat for umpires during the off-season, and weekly prayer calls during the season. CFC has grown to include 50 umpires from both the minor leagues and MLB, and during spring training in Arizona, Barrett – who lives in Gilbert – gathers guys from both tiers at Cracker Barrel locations in the East and West Valley, to cover all the ballparks.

“The thing that I love about our ministry is that even the guys that aren’t a part of it, they love to see us coming around,” Barrett says. “It’s not like, ‘Oh, here comes Ted – he’s going to talk about Jesus’ or whatever. I’ve still got a little bit of clout with them because I’m a Major League umpire… And we’re just all about love and inclusion, and even the guys that have no interest in it, we’re going to try and help them as much as we can, on the umpire side.”

Barrett was born near Buffalo, New York, into a working-class family. The third of four boys, he took up sports at a young age, playing football, basketball, baseball, and even boxing. “I grew up in an athletic house,” Barrett says. “It was sports 24/7.”

His family moved to Mountain View, Calif., when he was 16. While earning a kinesiology degree at California State University, East Bay, Barrett began working as an umpire for local high school baseball games. “The joke always is, no dad ever lit up a cigar and said, ‘That’s my boy! One day he’s going to be a Major League umpire,’” Barrett says. “It was just something I kind of got thrown into when I was 14. I think they needed an umpire for a little league game or something. You either love it or you hate it. And I loved it. I liked all kinds of officiating. I played sports, too, but I would always go to games and watch officials.”

In college, Barrett befriended a man from the evangelical organization Campus Crusade for Christ, and began attending Bible studies. “I’d gotten into it, and then one day, the guy said, ‘Hey, next week, we’re going to go out and we’re going to talk to people about Jesus,’” Barrett says. “I remember saying ‘OK,’ but in my mind, I was like, ‘There’s no way. I’m way too cool to walk around talking about Jesus, and I’ve got friends here. I’ve got girls that I like – I’m not blowing it. I’m captain of the football team, and I’m not doing this Christian thing. I mean, it’s fine over here with you on the side, but not out in the open.’”

After college, Barrett attended the Joe Brinkman Umpire School in Cocoa, Fla. He spent six years working minor league games before his first MLB game. “As I got into the minor leagues, I continued to do that kind of undercover Christian thing. And God just kept challenging me, like ‘I want more.’ I felt him calling me toward ministry,” Barrett says. “As I became an umpire, I kind of had this deal with him – ‘All right, I’ll do this, and if it doesn’t work out, then I’ll do whatever you want me to.’”

Barrett made his MLB debut in 1994 and quickly established a reputation as one of the best in the league. Former Arizona Diamondbacks outfielder Luis Gonzalez remembers Barrett calling games during his minor league days, and Barrett served as an umpire for more of his Major League games than Gonzalez can estimate. “He took great pride in his job. He was always willing to talk to the guys. If there was a call in question, he would listen to the player and take into account what he said,” Gonzalez says. “Very knowledgeable. If there was a heated dispute, he would take charge but still remain calm. He was one of my favorites.”

By the time he entered the umping world, Barrett had married “a California girl” and started a family (the Barretts have two sons and a daughter, all now in their 20s). Spring training instructional league first brought him to Phoenix in 1991, and, attracted by the affordable rent, he moved his family to Mesa that year. They eventually moved to Gilbert after a visit to Schnepf Farms. “I said, ‘This is awesome. I’m out in the country. Rural. There are so many dairy farms,’” Barrett says.

But there was still unfinished business between Barrett and God. “When I got to the big leagues, I was like, ‘OK, this must be what you wanted, so we’re cool.’ But then God kept tugging at my heart,” he says. “So I finally surrendered, and said, ‘OK, I’m in. Whatever you want. But, this is a dirty trick. I made it to the big leagues, and you’re calling me out, but I know I’m not going to be happy until I follow you.’ But then he kind of said, ‘No, I want you in ministry, but I put you in the big leagues for a reason.’”

In 2003, Barrett and fellow MLB umpire Rob Drake founded Calling for Christ. “We were both looking around at this lifestyle – young men, away from home, no accountability, living in hotels, working games, and then at night, the only thing open is a bar. Even for the guys that didn’t drink, it was the only place we could get food,” Barrett says. “And guys just fell into a lot of negative stuff… and I watched guys over the years of their lives, and their marriages and relationships would break up.

“What we’re hoping is that we’re helping guys develop not just spiritually, but also as umpires, as men, as fathers, as husbands… We know that the majority of the guys we’re building up, they won’t make it to the big leagues,” Barrett says. “But our hopes are that we’re building them up to where they’ll go off into another ministry, or church, and they’ll be leaders in that. It’s been really cool the last few years, watching guys – some of the guys got out, and one guy became a lawyer and does our pro bono work, and others went into law enforcement and started ministries within their professions.”

About 12 umpires showed up to the first umpires-only CFC retreat at a church in Oklahoma. (Players have their own prayer groups, as it’s widely considered inappropriate for players and umps to fraternize off-field.) Now the annual “man camps” are held at a ranch in Texas, where in addition to prayer and Bible study, participants play cribbage, smoke cigars and talk umpiring.

Barrett attends church in Tempe at the Big House. Sometimes he preaches. He recently gave a sermon about Samson. “He’s an amazing guy because God gave him all these talents and abilities, strength, and he was just a screw-up… And despite all his flaws, God continued to use him,” Barrett says. “I look at that as a reminder to me, that I’m one bad decision away from messing up my life. So I just rely completely on God.”