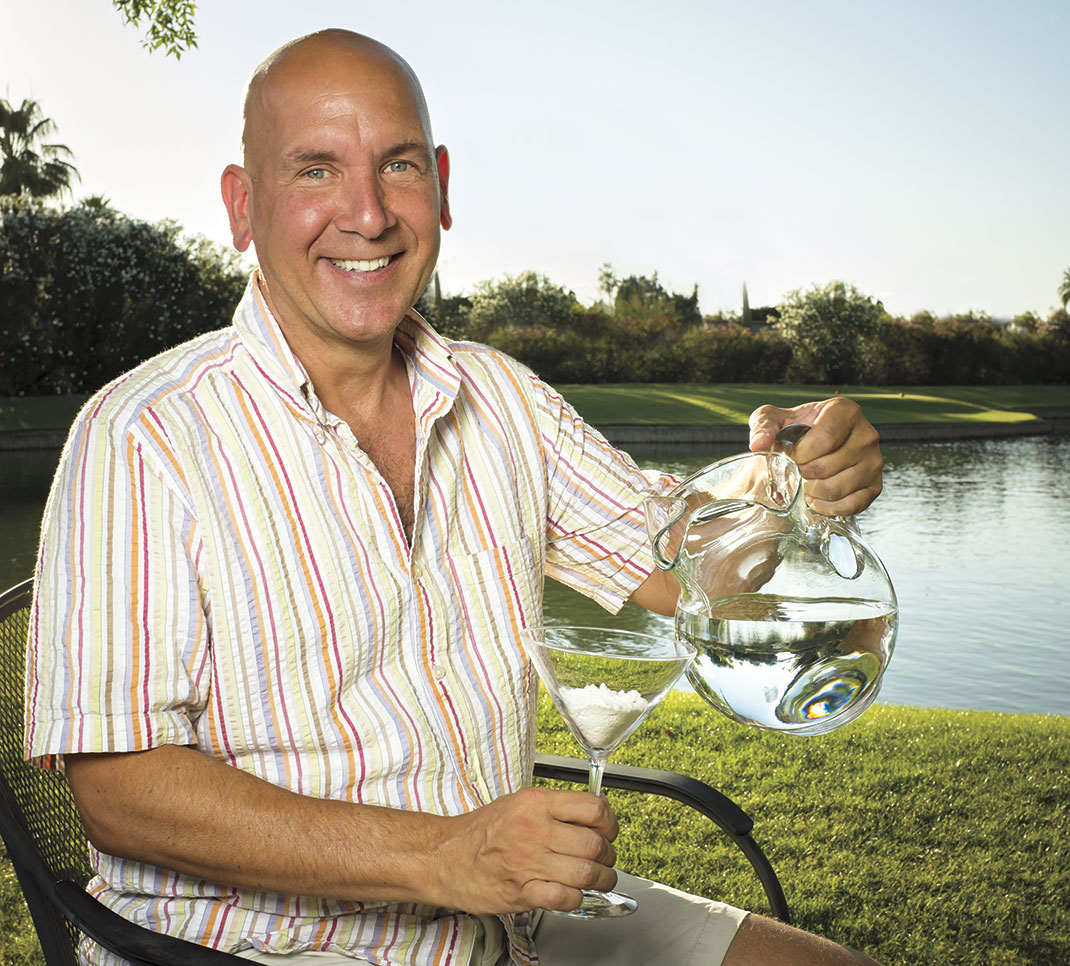 Alcohol in a Kool-Aid-like packet? The Scottsdale-based inventor of Palcohol says he’s got the powder. But does he?

For the first public unveiling of Palcohol, the controversial “powdered alcohol” that’s been generating a frenzied, nationwide media buzz since word first leaked of its invention last spring, creator Mark Phillips appears oddly intent on introducing his curious concoction, exclusively to PHOENIX, in the most unexciting style imaginable.

Filling a paper cone from the water cooler in the empty community center of the formerly seniors-only Scottsdale Shadows on Hayden and Camelback, the 57-year-old Phillips unceremoniously pours the water into a pouch of his flagship powdered vodka formula and sets it on a card table, stirring it with a spoon. “This is going to taste awful,” Phillips, a resident of the high-rise, mirthlessly warns. “I was hoping you would bring a juice to mix it with.”

He’s right. Mixed with only water, his vodka-flavored Palcohol (named by simply combining the first letter of “powdered” with “alcohol”) tastes rather flat and unimpressive – certainly nothing to further inflame the Russians. (He also plans to sell rum, cosmopolitan and margarita varieties.)

But flavor is hardly the point of this taste-test. Ever since news broke in April 2014 that the Alcohol and Tobacco
Tax and Trade Bureau approved the labeling for Palcohol (it later claimed it was approved in error, and persuaded Phillips to reformulate the ingredients in a less concentrated form to make the substance harder to abuse by inhalation), the very concept of alcohol in the form of a Kool-Aid-like powder has taken on almost mythical proportions. The idea immediately captured the fevered imaginations of media (“Sprinkle rum on your cornflakes!” gushed The Guardian) as well as lawmakers, who’ve already sought to preemptively ban Palcohol in (to date) 10 states. Legislators worry the product’s cocaine-like appearance and Capri Sun-like foil pouch, so far seen only in the YouTube promo videos Phillips has made, will make alcohol too attractive to youth and too easily concealed and abused by society in general.

But is it for real? Curiously, in none of its media coverage has anyone been able to claim they’ve actually gotten to see and taste the product. Even the FDA still hasn’t tested it; it’s only concluded that the ingredients Phillips listed on the label are in compliance with FDA regulations, and therefore there’s no legal reason to prohibit its sale.

Asserting “proprietary information,” Phillips has resisted letting anyone sample his patent-pending product, which has led some science geeks to question whether Palcohol is real – principally because converting ethyl alcohol, or ethanol, into powdered form is a physical impossibility. Biochemists say the molecules would have to be encased in some kind of tiny dissolvable capsules – which Phillips claims he hasn’t done.

“Ethanol will always be a liquid – there’s no way around that,” says Portland-based physical chemist Chad Jones, who hosts a podcast called The Collapsed Wavefunction. “So what you need to do is bind it to something like a cyclodextrin, which is a ring of five or six sugar molecules.” In 1972, General Foods scientist William Mitchell (inventor of Tang and Pop Rocks) patented a method for encapsulating ethanol molecules within a dextrin shell. His product never got to market. Companies in Japan, Germany and the Netherlands have tried to market similarly-formulated powdered alcohol since, but creating just the right starchy powder that can absorb up to 60-percent of its weight in alcohol remains the Holy Grail of booze alchemy.

Amazingly, Phillips appears to have done it. In the tasting session, his vodka Palcohol, which he claims is 56-percent alcohol by weight, produced a palpable buzz with only about half of the packet. So how did a serial entrepreneur who admits to getting D grades in chemistry manage to crack a code that’s stumped chemists for decades? Phillips will say only that he Googled chemists who were experts in various processes and pieced together their info to come up with the formula. “I’d email or call them, under an assumed name… saying I just wanted to know how do I do this particular thing,” he says. “And I’d do the same thing for each step, and then put all the pieces together.” Phillips is also cagey about revealing personal information. Positioning himself as a wine connoisseur who detests snobbery, the former Alexandria, Va. businessman achieved some fame in an independently produced video, Enjoying Wine with Mark Phillips, that aired on more than 300 PBS stations between 2006 and 2012, and an accompanying book, Swallow This. In the video and book – and the scores of speaking engagements he’s since logged as America’s no-frills “professional wine swallower”– Phillips has cultivated an image as someone with a sophisticated sommelier’s palate but a frat boy’s thirst for hedonistic pleasure, whether spinning tales about sneaking champagne into a movie theater in a squirt-top Gatorade bottle or swigging a Moscato d’Asti while mowing the lawn.

We do know, from a blog written by a cousin who’s now a Lutheran minister in Brookfield, Ill., that Phillips’ birth name is Mark Waldschmidt and he hails from Elmhurst, Ill. From his self-penned profile on a couchsurfing forum, it appears Phillips is single and likes to travel, and that he started his first company at age 28, sold it at 32 and has since considered himself “semi-retired.” A 1999 article in the Washington Post reports that while living in Alexandria and operating a website for his Wine Tasting Association, a nonprofit group that hosted tastings in the Washington, D.C. area, Phillips was arrested for privately selling, sans a liquor license, a bottle of Château Lafite Rothschild to an undercover Alcoholic Beverage Control agent, who seized 12 other bottles of wine from his home. The case was dismissed on a technicality.

Perhaps Phillips has decided to remain tight-lipped about his current enterprise following the flak that arose after an early version of his website, featuring what he calls unfinished “edgy” marketing copy, pitched Palcohol in terms that would make Animal House’s Bluto Blutarsky smile. “Yes, you can snort it,” Phillips wrote in what he now says was a misinformed burst of hyperbole. “And you’ll get drunk almost instantly because the alcohol will be absorbed so quickly in your nose.” (Phillips now says: “It would actually take about an hour of snorting to get the equivalent of one shot of alcohol… and it would be a very painful experience.”)

Now, he almost comically undersells Palcohol, saying he invented it only to have a convenient refreshment in his backpack on hikes – while sounding like a sly Willy Wonka muttering the monotone “Stop, wait, come back” to the fun-gluttons lining up to try it.

“You could sprinkle it on food, but it wouldn’t make you drunk,” he says, explaining the powder needs to interact with a liquid to activate the alcohol molecules. He claims you’d have to consume several milky bowls of Frosted Flakes to equal the buzz you’d get from one 99¢ mini bottle of Smirnoff – which he notes is also cheaper than the $3.99 he plans to charge for a 3-ounce packet. “And good luck spiking somebody’s drink with it, because it’ll take about 45 seconds to a minute of stirring for it to dissolve.”

Phillips prefers to talk about what he calls the “positive uses” of Palcohol. “In medicine, it can be used as an antiseptic,” he suggests. “The military could use it as alternative fuel: They could just drop in a pallet of powdered alcohol from a plane and have the troops on the ground constitute that into ethanol. Plus, using lightweight powdered alcohol would reduce our carbon footprint dramatically, because of the fuel savings in transporting it.”

But perhaps the most interesting talking point about Palcohol is the one Phillips won’t address: how he invented the stuff. “Even if he didn’t use a cyclodextrin container, he would still have to bind it to some kind of carbohydrate or starch,” Jones says. “If it’s something other than that, then he has made a pretty impressive scientific discovery.” 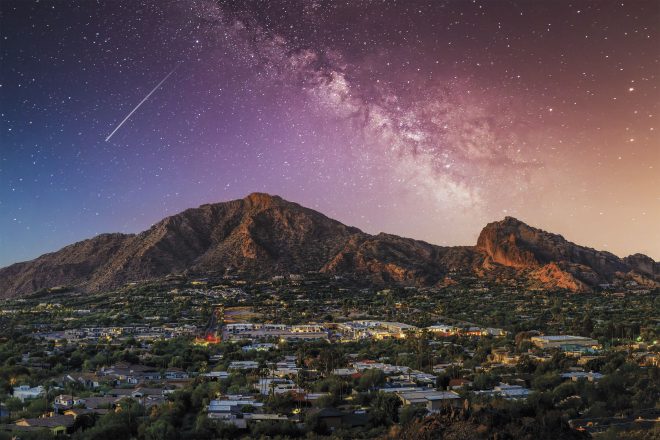